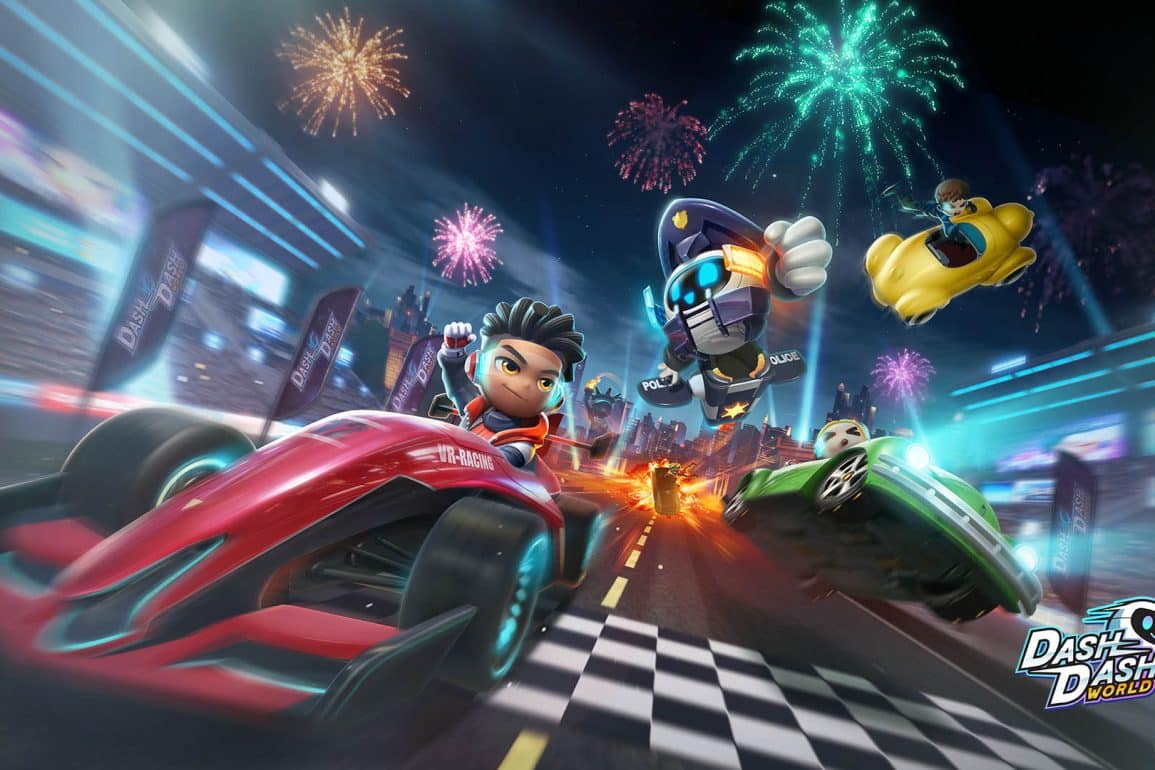 Racing fans haven’t been getting much love from the Quest. Sure, we’re all waiting for Death Lap, but so far, there’s not much for us! We’re not sure when Dash Dash World is coming to the Quest, even though we think it’ll show up sometime in November! We’re not even sure how much it’ll cost, but I’ve had some time with the Quest beta of the game, and I can certainly give a preview before we get the final release and do a proper review.

Developer by MotionX Studio, who previously released XALT: Last Stand on Rift, Dash Dash World is a multiplayer racing game with cute graphics and a bunch of weapons that you can use against other racers. In that sense, it’s a lot like Mario Kart, and it’s being developed for several VR platforms including the Quest!

At the time of writing, Dash Dash World features 3 racing levels set in entirely different locations, although the game’s creative director has promised that they’re adding more circuits. Dash Dash World also features a set of cars, but, from my experience, the car differences appear to be mostly cosmetic. You also have a lot of customization options for your avatar. You can change your character’s face, their skin color, their clothing, and you can win loot boxes which will unlock more clothing and accessory options.

Thumbstick, Tilt, and Why Is This Braking?

You accelerate by holding down the grip button, and you can drift on curves with the trigger button. You can steer using the thumbstick or by tilting your controller. Strangely enough, if you’re using the former option, the brakes are activated by clicking down the thumbstick, so the first few times I played I found myself accidentally braking when pushing against the thumbstick to take hard curves. To be fair, this was less of a problem once I got used to it. I still found it a somewhat strange control choice.

The graphics are cute and colorful and fit the theme of the game quite well. The music fits the theme as well but quickly grows repetitive. Again, this is a beta, and more music tracks could well be added to the final release version.

As you’re racing, you collect boxes marked with question marks that contain a variety of weapons, most of which are quite humorous. You can whack nearby cars with frying pans, you can aim a short-range wind vortex at nearby cars, slowing them down. You can lob grenades at other racers in the distance. You can shoot other cars with a crossbow, etc.

While you’re racing, you slowly accumulate turbo, that you can activate for a short burst of speed using one of the controller buttons. This gives you a slight, but sometimes useful, advantage.

The game starts off with a pretty elaborate story, that’s entertaining but seems to have very little impact on the game world and the gameplay. Alien robots have come to Earth, and we find out that they’ve been watching humans race, and came along to join in on the fun. Why do we need this context? I don’t know, but okay.

There are some interactive touches to the levels, in one level, a giant samurai slices his sword across the track, slowing down any cars that he slices past. In another we see a dinosaur trying to eat passing cars. None of this is fatal, and the worst that’ll ever happen is that you’ll be slowed down for a while before you get back to the race.

At the time of writing, Dash Dash World is a fun little racing game. It’s not going to change the world, but then again, there aren’t many racing games out on the Quest at the moment. The cartoony style might make it appealing to younger players, but the scarcity of tracks (unless they’re at least doubled by the time it’s finished) might put off older players. Wait for our full review as the game approaches release!