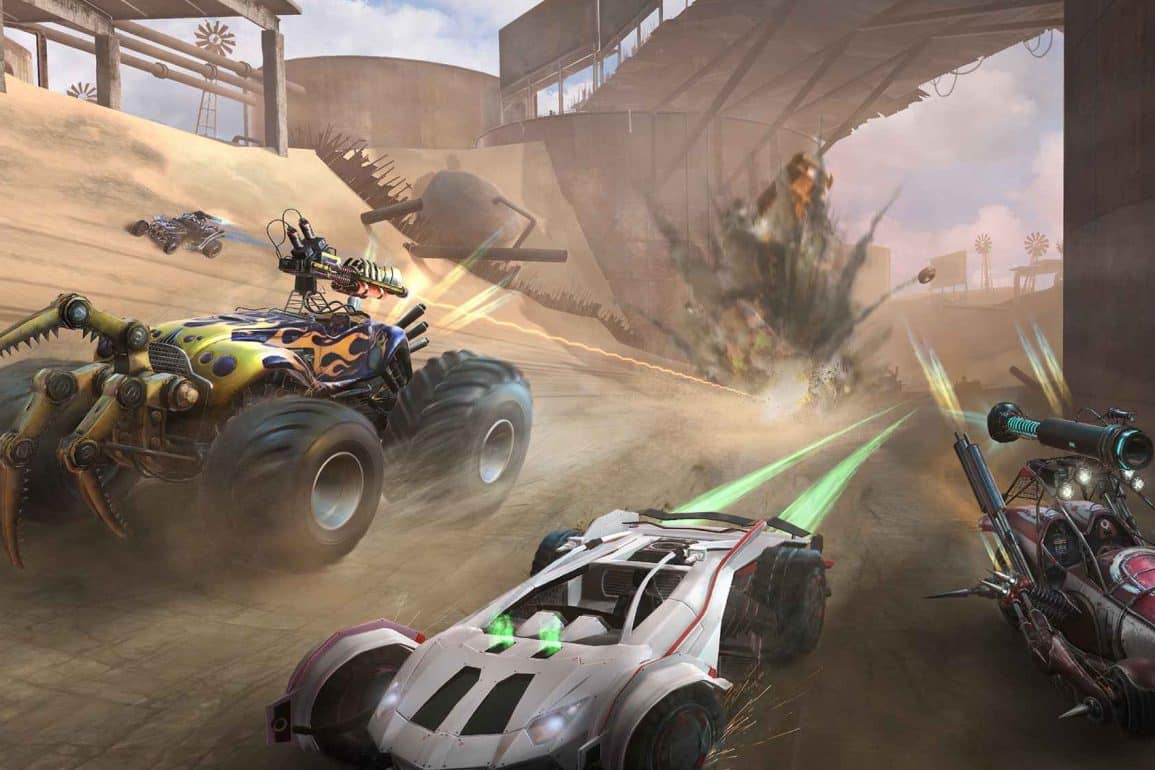 We love racing games, and we’re all very excited to play Death Lap! We asked developers Ozwe Games some of our top questions, as well as a few we found being asked around the Quest community. Read on for our DevTalk about Death Lap for the Oculus Quest.

Yoan Santelli, the senior dev at Ozwe and the lead designer along with Stephane Intissar (the CEO of OZWE Games) was kind enough to give us some answers! Yoan is a game designer and developer living in France. He’s worked in game design and development for the last ten years. He’s also of the developers behind Anshar War 2 and Anshar Online.

6DOF Reviews: Okay, we need to know – who’s voicing Nitro Saint Payne and is he actually a blood-thirsty egomaniac or does he just play one in the game?

Yoan: Haha, I am sure the voice actor is a blood-thirsty egomaniac.

6DOF Reviews: By now we’ve all read your initial announcement, and know that, aside from being killed by your rivals, you can be eaten by a colossal piranha, or get killed by malicious clowns, or giant dice! Are there more environmental dangers? And how are they triggered? We still remember Split/Second on the PS3 and XBOX 360, which allowed users to build up meters that they could then use to trigger those environmental hazards. Do the hazards in Death Lap operate the same way? If not, how?

Yoan: Yes, there are some more environmental dangers. Giant eyes fire lasers at you, pinball balls that can crush you, pinball flippers, and a massive skull with sharp teeth. Most of them are triggered by the player’s presence, but others are activated by shooting at specific mechanisms like the skull teeth and the flippers. Other hazards like the laser eyes are temporarily disabled when shooting at them.

6DOF Reviews: You’ve announced that Death Lap comes with 5 tracks, and we’re glad to see that they’re pretty diverse! Are there plans to add more tracks in future updates? Also, how much does the environment affect the racing mechanics? For example, in the desert track, does steering in sand feel different?

Yoan: We really wanted the players to be able to split their focus equally upon driving and fighting, so we keep the driving part consistent across different road materials. The tracks have different widths, elevations, and turns, and that affects the driving. We don’t have any extra content to announce at this time.

6DOF Reviews: How many car types are there? Will more be added in the future?

Yoan: There are five vehicles, each with a very different character, feel, and weapons. Each of them is better suited for some tracks than they are for others.

Yoan: We don’t have any additional content to announce at this time.

6DOF Reviews: Can you mute VOIP for individual players if they’re offensive?

Yoan: VOIP can be enabled or disabled across the game. Joining the VOIP channel is optional.

6DOF Reviews: We understand that the game will feature global leaderboards, and that should make for some seriously competitive driving! Are there any in-game rewards (cosmetic or otherwise) for the top players?

Yoan: Every race is unique, each time the players’ performance varies, as well as the use of the power-ups and traps. That’s why the ranking is better than the time when we compare performance between players. The global leaderboard is used to compare time for players who are playing in a single mode.

6DOF Reviews: We’ve all been very impressed with the teaser/trailer footage – which platform was that recorded on?

6DOF Reviews: What kind of sacrifices, if any, had to be made to get Death Lap running smoothly on Quest? What are the greatest challenges you met with the Quest version? Did the Quest version allow you to do anything you couldn’t do on the other platforms?

Yoan: Performance is tight, and every piece of code, all models, and all textures are optimized to run smoothly on the Oculus Quest.

Yoan: Compared to the Oculus Go or the Samsung Gear VR, Quest has a welcomed increase in performance that allows us to provide a better-looking game. It also allows us to use the Touch controllers and positional tracking to create a more immersive experience.

6DOF Reviews: Just how ‘3D’ are the tracks? Do any include roller-coaster style loop the loops? Do you have different view options to help players who might have trouble with motion sickness?

Yoan: The tracks don’t bring the players on loops or anything that can trigger motion sickness. There are jumps, curves, and tight turns but never upside-down driving that we think can make some players uncomfortable.

Yoan: We have put the focus on motion sickness control for the players. They can choose in-game between two viewpoints, first-person behind the steering wheel, third-person behind the car. And they can change the comfort mode of the camera in the main menu between three modes which determine the stiffness of the camera rotation, which substantially changes the intensity of VR motion.

6DOF Reviews: Have you considered allowing an option for two players to team up in one vehicle? With one handling the driving and the other controlling the shooting?

Yoan: We prefer them to fight each other!

6DOF Reviews: Finally, some nitty-gritty details! Is the game cross-buy? Cross-play? How much will it cost on Quest and can you give us a release date?

Yoan: Cross-play, yes. Cross-buy, not decided yet. The price and release date are yet to be announced.

Are you as excited as we are about racing and shooting on the Quest? Did we miss any vital questions? Don’t feed us to a giant piranha, just let us know so we do better next time! Death Lap’s official page can be found here.