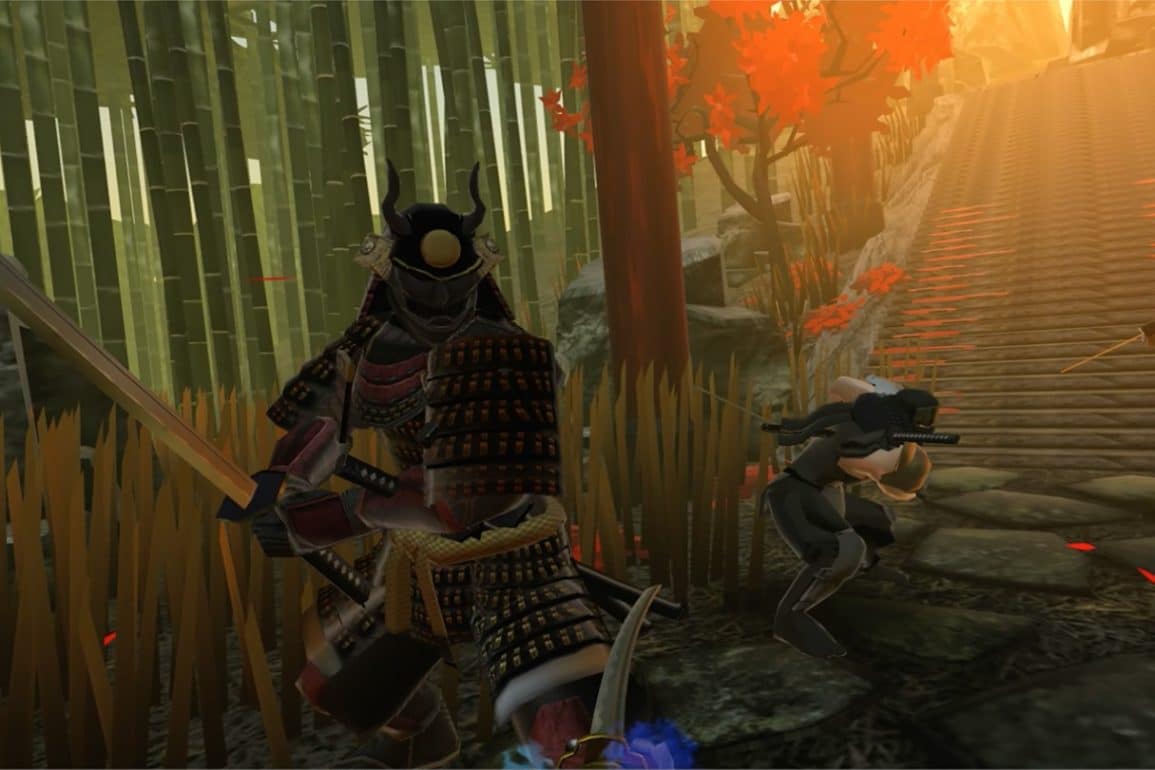 This week, Coinflip Studios will launch the combat-intensive Ninja Legends for the Oculus Quest. The game features waves of enemy ninjas leaping at your face, forcing you to block and slice with katanas, staffs, and other exotic weapons.

We’ve had a chance to play the release build and wanted to talk to Coinflip about the game’s influences and development. Coinflip’s Engineer and Designer David Geisert and Lead Engineer Steven Jian shared with us some behind-the-scenes info about Ninja Legends’ anime inspirations, creating a satisfying VR slice, and which new modes may be added in the future.

Check back for our full review when the game launches on August 8. If you’re on desktop, you’ll find a little bell in the bottom right corner, use that if you want to get push notifications whenever we publish a new review!

6DOF: Which films, anime, or historical facts influenced the design of the enemies and weapons in Ninja Legends?

Coinflip: We were heavily inspired by various films to maintain a high speed of 1 vs Many combat. Ninja Assassin, Ip Man, Kill Bill, and many others served as inspiration for the base feeling for the game. Snow Crash is also an inspiration for the theme— in that book, the main character is a master swordsman in Virtual Reality. We liked the staff action in the movie Ip Man and tried to make the staff in the game behave like the way Ip Man uses it.

The rope dart is heavily influenced by Mortal Kombat, although a lot of other games have used a similar mechanic. We liked pairing it with the fist and yelling “Get over here!” while playing. The hand blast special is a mixture of the Kamehameha from Dragon Ball Z and the Rasengan from Naruto.

The giant fist concept for the gauntlets was inspired by One Piece. We wanted to make it feel like Luffy Gear 4th.

6DOF: How did you strike a balance between historical weapons/settings and a more fantastic approach?

Coinflip: We wanted to start with a solid base for the player in the real world. Then as the player progresses, they will unlock the more fanciful elements.

The first level is completely normal, with a bit of slow motion. In the second level, they have unlocked the bow special ability and the slow-motion world that comes with that. The third level has a boss with magical abilities.  And then they begin to unlock more special abilities with much more magical focuses.

6DOF: What were the challenges in making the combat feel realistic in VR?

Coinflip: Our goal was to make extremely satisfying combat and rewarding gameplay— not necessarily the most realistic combat. So this effort centered around guiding the player to make movements that feel great and giving them the feedback they expected.

One of the largest challenges is flail mitigation. We wanted to make sure the player couldn’t just flick their wrist constantly and win. We had to be very careful with our damage model and enemy design to prevent this.

Another core principle in how we designed the combat was to have the weapons always match how the player was moving. We never wanted the player to feel like they had to swing slower or hold themselves back. In many VR games, the hands will stop matching the player’s actual hand position in order to give ‘weight’ to the weapon or to show the weapon was blocked.  Our game was about being the ultimate ninja warrior so we felt that would be a distraction and reduce the satisfaction of the gameplay.

6DOF: Were there any additional features you contemplated adding to the combat?

Coinflip: We built out a few features that didn’t make it into the game. There was always a difficult balance between complex combat and how distracting it would become to clearly communicate with our players.

In our earlier versions, we had directional slice indicators and explicit hit zones for enemies. We removed this because we found that players would end up just focusing on the UI instead of feeling immersed in the combat. It prevented them from moving the way they wanted to move. It was also immersion-breaking when your weapon passed through an enemy and they didn’t take damage because you missed the slice angle.

Another example is enemy blocking mechanics and creating ways for players to defeat enemy blocks. We found that this slowed down gameplay and was difficult to communicate to players. This is something we’re still exploring and may introduce with enemies in later releases!

6DOF: Any tips for facing the game’s bosses? They definitely seem to be much more difficult than the ninja rank-and-file.

Coinflip: It is much more important to be blocking in boss levels than in most of the other levels. If you don’t block the boss attacks you will lose.  The bosses also have projectiles that need to be hit hard instead of just lightly blocked.

6DOF: Will the game continue to be supported after launch with any planned updates?

Coinflip: We are working on the first update already. We are taking feedback from players on what parts of the game they like and what they would like to see more of. Our current thoughts are between a stealth component with locomotion, an archery tower defense mode, and a sandbox mode where players can import their own levels, enemies, and weapons.

We would love to get feedback on which of these sounds the best, or anything else people would like to see. Our ultimate vision is for Ninja Legends to be the ultimate arcade-style ninja experience, so we are looking forward to adding in more different aspects of being a ninja.

6DOF: Is it true that if you shout while you swing, your strikes will be more powerful?

Coinflip: Yes, but not because of the programming. It is a major part of martial arts to make sure your breathing is done properly. It is also used in movies to make sure everyone knows what actions are coming next.

We’ve always joked that we could actually implement that if we wanted since all VR headsets have a microphone but to be clear, we do not access the microphone in our game.

Ninja Legends will be coming to the Quest on August 8th, remember to check back here for our full review. This Q&A was conducted by Andrew Podolsky.