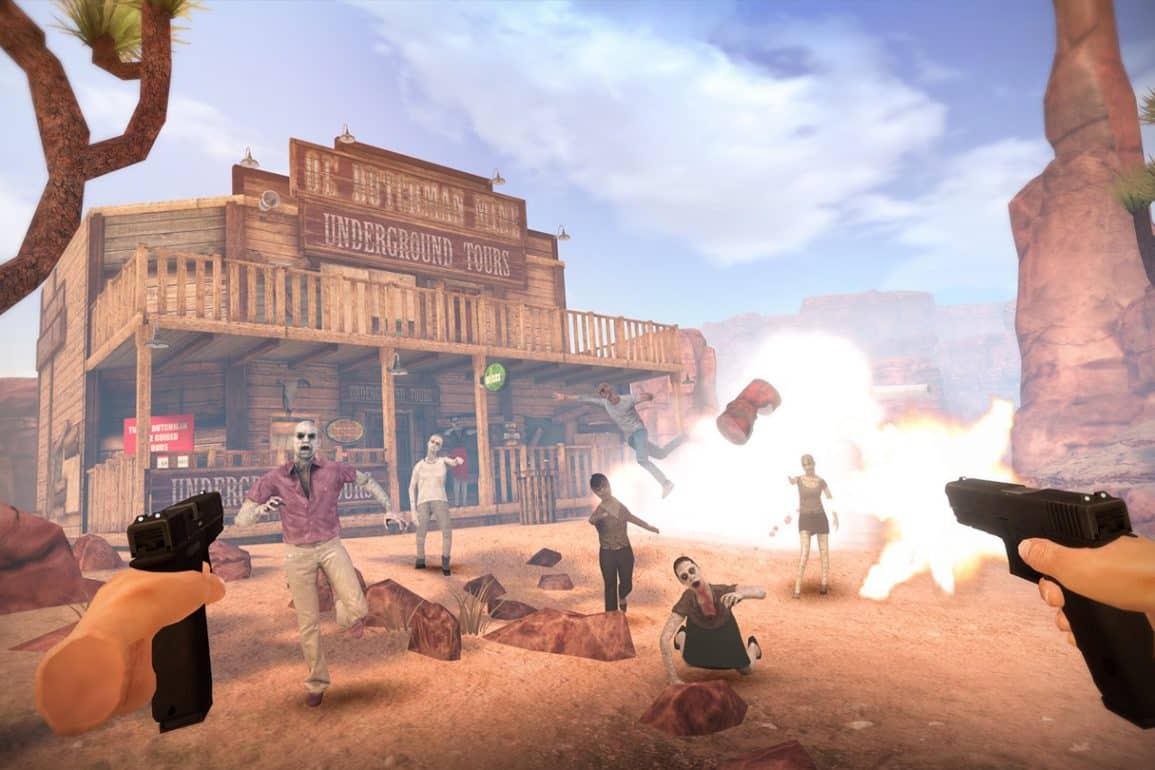 After a long wait, Arizona Sunshine finally made it to the Quest before 2019 ended, our own Doc Neale reviewed it, and liked it a lot. Now, with the upcoming release of the Old Mine update, we figured it was a good time to talk to Vertigo Games about the challenges they encountered porting Arizona Sunshine to the Oculus Quest. Below, we interview Vertigo programmer Arjen Van Heck and he answers some of our questions!

6DOF: Let’s get the simplest question out of the way first! WHY ZOMBIES?

Zombies are great! Relentless, fearless, creatures that just won’t give up. Take one down and there will be another one behind it. The thought of endless waves of zombies is terrifying, and that translates really well to VR.

6DOF: How did you decide what to cut back in order to port Arizona Sunshine to the Quest? Did this involve heated debates? What key elements did you decide could not be sacrificed?

‘Keep it the way it was.’ That was our goal. The main game was well received and we wanted the same experience on the Quest. We knew the Quest is not as powerful as a beefy PC but that did not stop us from trying.

The thing that I fought for the most was to keep the zombie mechanics the same. I wanted to shoot off legs and heads, for me that is the best part of Arizona Sunshine. If that was cut, then why would we even port the game to Quest? In the end, all the gore stayed and I’m proud of that.

6DOF: What was the single biggest compromise that you felt you had to make for the port to work?

I think that has to be the realistic graphics from the original, in exchange for a more stylized version. We had to make big decisions regarding what and where to optimize our game. The large world with lots of interactions was something that made the original game stand out. We made the decision to keep that and that meant reducing the number of complex shaders and big resolution textures, so we could keep so many objects on the screen at the same time.

6DOF: Were any of your decisions influenced by the resulting storage size of the game on Quest? We see that most Quest games are under 2 gigabytes in size, and Arizona Sunshine is around 1.25 gigabytes. Why is this the case? Why aren’t we seeing games that are 5 or even 10 gigabytes in size?

Honestly, we did not consider storage size at all. The size came naturally as we optimized the game. It is a bit of cause and effect: because of the graphics chip and shared memory we had to use less complex models and reduce the size of our textures. This resulted in less data to store and load, and quick loading screens.

6DOF: Do you think the release of Hand Tracking for the Quest is a game-changer? Do you have any plans to incorporate that functionality into any future releases?

The hand tracking is a very well made feature, one of the best I’ve seen so far. I like how robust it already feels and I’m excited to see what we can come up with if we prototype this.

6DOF: Speaking of new functionality, has the release of Oculus Link affected your plans in any way? Some Quest users are concerned that Link might dissuade developers from making Quest-native apps, have you felt this way at all?

Not at all. I think Oculus Link is a great way to enjoy PCVR games without having to buy a PC headset or a powerful PC to play. But the Quest is all about freedom of movement, easily bringing the headset with you to your friends or to a party. Quest native apps will always be necessary for that.

6DOF: How much of your code had to be re-written for the Quest?

Exactly 24.8%. No, in all seriousness, most systems serve the same goal as their original counterparts but we had to rewrite and optimize most. The biggest one was rewriting the systems related to the shooting. The reason we had to rewrite much of this was that all of our content is multiplayer enabled and it caused massive CPU spikes when all players started shooting in a 4 player horde mode for example.

6DOF: How much of the content had to be remodeled for the Quest? Or was it enough to just reduce the polygon count? Did this get done manually or did you have some way to automate it?

Basically everything has been changed in some form. There wasn’t a single thing we could use straight out of the main game because it was simply too heavy in some way. It was mostly done manually to maintain quality. For example reducing the polycount for models, adjusting texture resolution and repainting textures were done by hand.

Something we could automate was combining geometry together. We created some clever tools that would process entire scenes, sorting objects by type and area, drastically reducing GPU instructions.

6DOF: Any more games coming soon from the Arizona Sunshine team? Can you give us a hint on what we can look forward to?!

We still have a few content drops scheduled for Arizona Sunshine on Oculus Quest, for example, the Old Mine update, adding a new Horde mode map to the game. For a reminder of what else is to come, check out the content roadmap.

That’s it for our DevTalk! Hope you liked it! Are there any other developers you’d like to see us talk to? Give us your ideas and we’ll do our best to follow up on them!