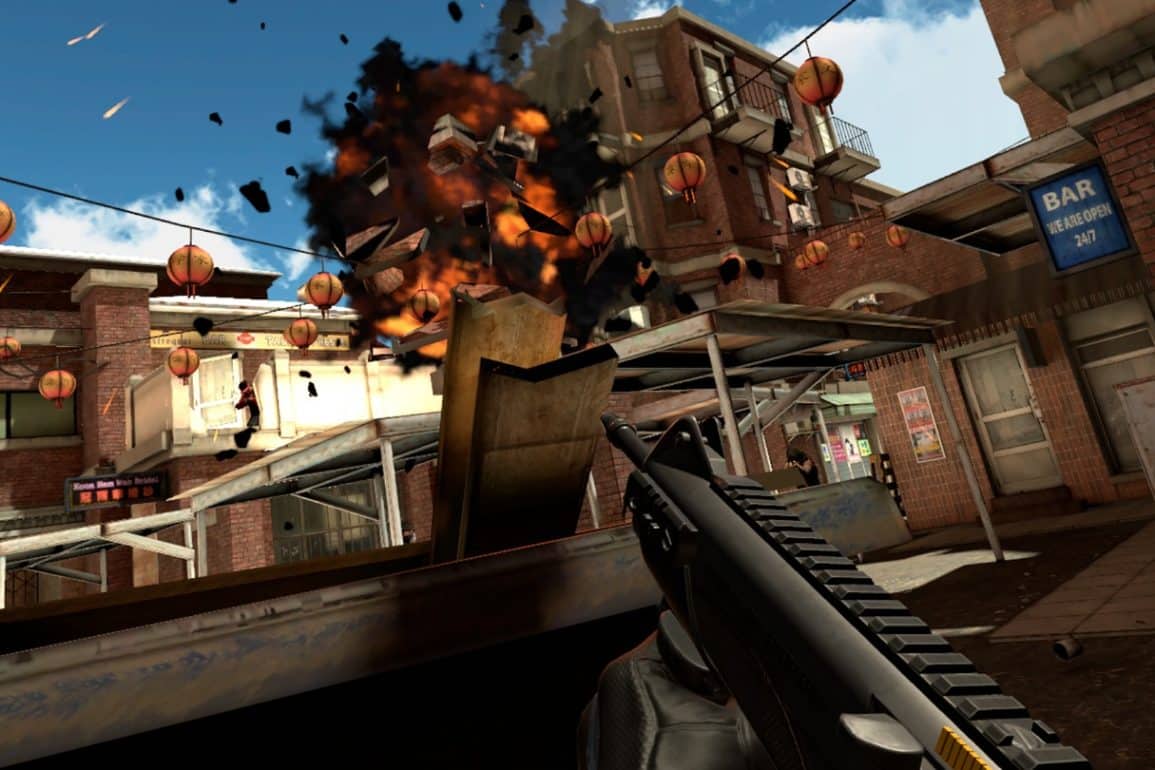 Bringing Arcade Shoot-Outs To The Quest

In case you hadn’t noticed, we love Crisis VRigade 2. We enjoyed the first Crisis VRigade but never reviewed it since at that time it was only available on SideQuest, and we hadn’t started our SideQuest reviews series. Now, however, both the original title and its aptly titled sequel, Crisis VRigade 2, are available for all users through Oculus App Labs!

We figured it was about time we had a Dev Talk with Diego Martin, Sumalab co-founder and Crisis VRigade developer!

Without further ado, here we go –

6DOF: In our review of Crisis VRigade 2, Pete Austin said the Crisis VRigade series reminded him mostly of Time Crisis, can you tell us what particular games inspired the games?

Diego: We’re a small studio and we’re making games similar to the ones we enjoyed playing. As 90’s arcade players we felt Time Crisis was a perfect title for a VR adaptation.

6DOF: Have Oculus ever really explained why they wouldn’t accept CV1 or 2 onto the official store? What, in particular, did they have an issue with?

Diego: No explanation, we just got a generic email with nothing about how we can improve it to get into the store.

6DOF: Did the rejection of CV1 impact the development of CV2? If so, in what ways?

Diego: Our main market is PSVR so there was no real impact, but we tried to apply for the Oculus Start program to see if they can help us figure out the reasons for the rejection.

6DOF: How do you feel about the curation policy of the Official Oculus store?

Diego: We prefer the Sony approach: they have very high technical requirements and high curation standards, but as long as you make the upgrades or fixes required, your game makes it through. They don’t get too involved or reject your game because they don’t like the concept. If a game is well polished it gets published.

6DOF: What’s your impression of App Lab as a storefront, is it a good enough substitute for being on the official store?

Diego: As an indie studio, we don’t have a big budget to spend on advertising or marketing. Since Oculus keeps App Lab in the shadows, we don’t really get the same exposure that we get when releasing a game on other platforms, so that’s a big setback.

6DOF: What do you feel the impact of the Quest has been on the VR medium as whole?

Diego: Huge, in my opinion, that’s the way VR should advance. A comfortable device that you can have lying around on the couch in the living room and just grab it to play at any time without too much effort – like worrying about cables, or having to connect to a High-End PC or whatever…

6DOF: Any idea how the player base on Quest compares in size to that on PSVR?

Diego: I think players are moving towards Quest, at least until Sony releases the next-gen PSVR that I hope will be the next step forward in VR…though the latest news that I’ve heard doesn’t point in that direction.

6DOF: Some developers reported boosted sales when the Quest 2 was released. How did the release of the Quest 2 impact your downloads or sales?

Diego: We reported a download increase for Crisis VRigade, the sequel hasn’t been out long enough on Quest for us to have data to compare to.

6DOF: What game engine are you using for the CV games? How big is your team and how long did development take for each?

Diego: We’re using Unity for development, and we’ve been a 5 person team developing both titles. With Crisis VRigade we were pretty new to developing VR titles and it was very much a learning project for us. We had other non-game projects while developing the 2 titles, so the one-year and two-year development cycles for the games weren’t on a full-time basis.

Diego: Now we’re completely focused on game development and hope to speed this up, or spend the time on more complex projects.

6DOF: What was the greatest technical challenge you faced, bringing the games to Quest?

Diego: Performance! We develop for PCVR, try to get the games working on PSVR, then we go down to the abyss of performance hell for Quest 1. We had to do a LOT of performance optimizations to make both Crisis VRigade titles work on the headset.

6DOF: What’s the best tip you could give to new game developers approaching Quest as their platform of choice?

Diego: Although it’s a great piece of hardware, be ready to lower you graphical and design expectations to make titles work.

6DOF: Are you bothered by the inherent limitations of the Quest? What would you hope for in a Quest 3?

Diego: As I mentioned, with the earlier Quest, it’s an “abyss of performance hell“, but as Oculus keeps boosting their hardware with higher specs, devs will be able to make greater experiences.

6DOF: What do you consider unique to your development process?

Diego: We’re a small team and everyone has to be aware of what the rest are doing and contribute their part accordingly. Now we are in a working-from-home situation, but I love the synergy that we have when we’re working together at the office.

6DOF: Did Covid-19 impact the release schedule of Crisis VRigade 2?

Diego: Sure. It’s hard, working from home, especially with kids! Getting anything done is much slower, but we managed pretty well with video calls and daily chats.

6DOF: We noticed people offering others the Crisis VRigade 2 Quest apk on Facebook groups, perhaps they felt justified because the first game was offered as a free download. How do you feel about such activity? How does piracy impact you as a developer?

Diego: Piracy is a part of the game industry. We want people to buy our games, obviously – but we were actually excited to see them on piracy portals! It feels like we make popular titles and that is always a good thing.

6DOF: When should we expect multiplayer (and new levels//modes) to land? Also, do you see Sumalab developing local co-op games like TritonVR or Space Pirate Arena?

Diego: We’re almost finishing with the co-op multiplayer as well as a new “Time Attack” game mode with 3 new levels. We hope to release it soon but the whole working-from-home situation is really turning our schedules upside down.

6DOF: What are your future plans? Crisis VRigade 3 or something completely different?

Diego: We have some prototypes in the oven. Crisis VRigade 3 will happen, for sure. An online competitive Crisis VRigade is another project and, yes, something completely different, a more “traditional” game (with VR support at least), is not off the menu.