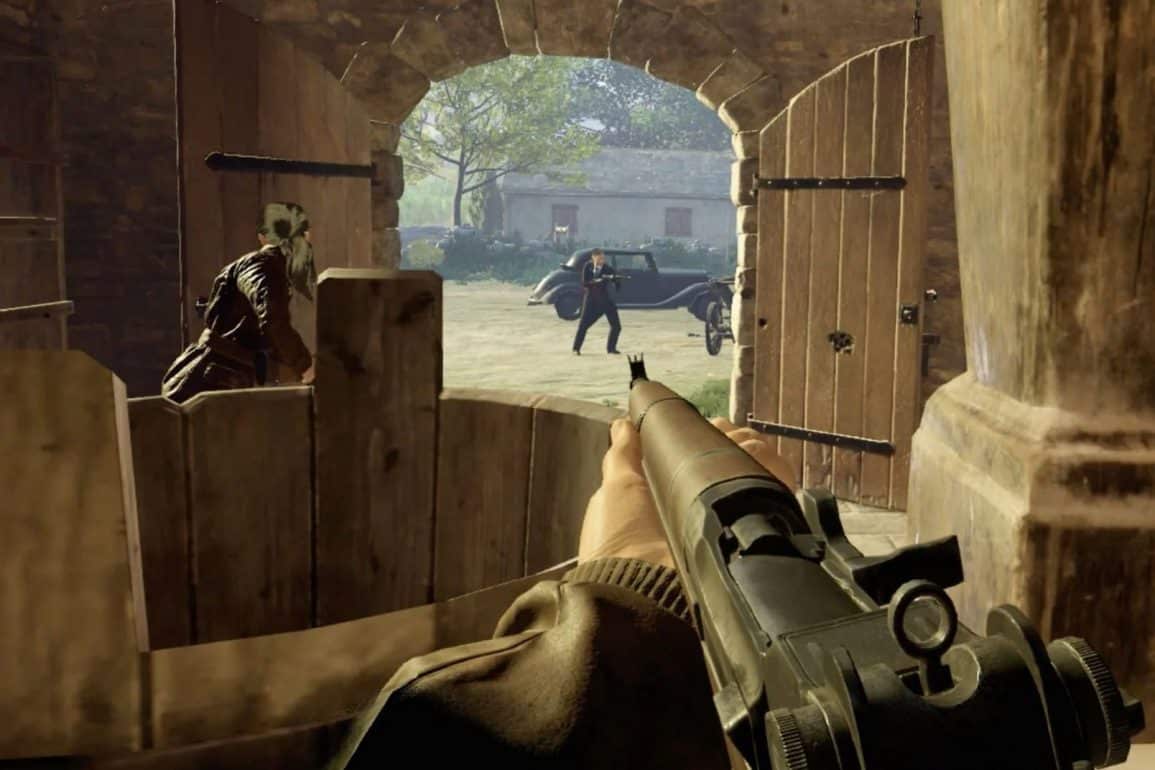 If you prefer a video version of this preview, you’ll find it on our YouTube channel right here.

Here’s the thing, though. Medal of Honor: Above and Beyond was not initially planned as a VR game, and, unfortunately, it shows. Right from the start, the interface elements are clearly designed for a flat-screen. It’s as though the developers only found out last week that this was all going to be happening in VR, or as though somebody decided that interface concerns will have to wait for post-release patches to be addressed. Title screens are two dimensional and far too big, looming like monoliths in front of the player, too big to be taken wholly by the viewer. At the top of the monolith, towering above you, you’ll see the number of your current mission, for example. You have to tilt your head towards the floor to see the name of that selfsame mission. It’s like somebody decided that VR players wanted to see oversized Instagram stories between missions. Am I spending too much time talking about loading screens? Perhaps, but they’re indicative of issues that keep popping up.

In contrast to the colossal loading images, some of the onscreen text is minuscule and pixelated. There are only three graphical settings, low, medium, high and a ‘dynamic’ option that seems to shift between them depending on the power of your PC. At high, the text is somewhat more legible, but still, clearly not designed to be viewed in VR, but rather on a high-resolution desktop monitor. There’s a faux VR feel to the GUI; you’ll find a book that acts as your menu, for example, but when you pick it up, you don’t click on the book. Instead, picking it up just opens up a two-dimensional menu with the aforementioned pixelated text. These kinds of design choices betray a very late transition to VR, and they give off a sloppy not entirely done feel to the whole thing.

We Haven’t Done Bananas Yet, ‘Ave we?

You want me to get to the bit where you shoot Nazis, right? Well, I’ll get there. I’m exercising your patience, not because I’m sadistic, but because patience is what you’ll need for this game.

Having attended the online press event before getting access to a review copy of the game, I found myself confused about how the game should be approached. The game director, Peter Hirschmann and all the people involved went out of their way to portray the game as some kind of homage to WW2 veterans. They used phrases such as ’emotional authenticity’. The game comes packaged with a virtual ‘Gallery’ mode, full of documentary interviews with veterans filmed at locations during which they experienced historical events. All the talk about the gallery and ’emotional authenticity’ conspires to make you expect a somewhat solemn game like the latest entries in the Battlefield franchise, another series published by Electronic Arts but developed by EA DICE. That’s not the case at all. Whereas the Battlefield story vignettes can be grim and gloomy, Medal of Honor: Above and Beyond attempts to strike a comedic tone almost reminiscent of shows like Hogan’s Heroes or ‘Allo ‘Allo. The comedy is somewhat juvenile and stands in stark contrast to the tone the game’s marketing would have you expect. Then again, I stopped expecting much in the way of emotional ‘authenticity’ when I saw the developers pivot to tell us how, despite everything, it was really fun to shoot Nazis.

The Questionable Joys of Shooting Nazis

I feel obliged to explain that I’m not against shooting fictional Nazis per se. In fact, within the context of a video game, and with the understanding that it’s a game, I’m happy to shoot Nazis, Americans, Martians, and anybody else that a plotline gives me a good enough reason to dismember, disembowel, or decapitate. The issue here is the disconnect I felt between being told I should take the game seriously, and the almost childish giddiness on display when talking about shooting Nazis.

So no, this is not a game that will try to show you the horror a soldier must feel at killing somebody, even if that somebody just happens to be a Nazi. If you’re looking for a more in-depth examination of human nature, look elsewhere. Battlefield might not try to portray the average Nazi as sympathetic figures, just as stuck in war as his allied counterparts might be. Still, at least that game manages to carry a more solemn tone.

Let’s Get Rolling, Then!

All of which brings us to the actual game.

The single-player campaign happens across what the developers like to refer to as ‘bite-sized’ scenes, and they’re not kidding. Here’s a sentence you’ll see me repeatedly use here; this is not Alyx. Whereas Half-Life: Alyx presented you with almost a dozen ambitious chapters, each one lasting nearly an hour and spanning a whole section of a map, Medal of Honor: Above and Beyond gives you tiny snacks. In the very first ‘scene’, for example, you find yourself lying on the ground in the aftermath of an attack, two friendlies are making sure you’re okay. As they do so, a Nazi soldier comes running at you from behind them. You’re tasked with picking up a gun and shooting him.

The scenes do get longer and bigger in scale, and there are some Hollywood style set pieces, but the diminutive scale of some of the scenes, although apparently designed to ease people into VR, will be found ridiculous by VR veterans hoping for true immersion. If Alyx did things this way, each ‘chapter’ would’ve been made up of at least a dozen scenes.

Medal of Honor: Above and Beyond‘s campaign is made up of fifty-four scenes, divided across six missions. There’s also a prologue consisting of five small scenes, one of these, set in a hospital, is designed to help you configure the game settings and comfort options. It’s a cute idea, but far more tedious than a simple settings screen would’ve been.

Oddly enough, Alyx was specially mentioned as being an inspiration to the team, a showcase for how Triple-A VR titles could be made. Yet, – it’s impossible to feel that the team behind Medal of Honor has had any appreciation for what Half-Life: Alyx truly brought to VR. In Alyx, objects were tactile and tangible, the graphics were superb, the level design was stellar, the gameplay mechanics were iterated to perfection. Alyx was not only designed for VR, but it was iterated and re-iterated until it became the showcase for how a VR shooter should feel. Medal of Honor‘s is a flat game shoehorned into VR because Facebook got involved and made it so, and it shows.

Everything goes through everything, nothing feels solid. The graphics are shoddy, as though the core team, that had previously worked on Medal of Honor: Allied Assault (released back in 2002) had not upped their graphical game since then. Am I exaggerating? Yes. I am. Fine.

To be fair, Above and Beyond does indeed look better than Allied Assault, a game that’s 18 years old. But you know damn well what I’m about to say next because I’ve already warned you I’ll be saying it; this is not Alyx.

Oculus Quest Games for 2020 That We’re Super Excited About!

Performance-wise, I’m playing the game on a Razer Blade 15″ advanced model with an i7=9750H CPU and an RTX2080 GPU, my system runs Alyx (with far superior graphics across all settings) effortlessly, and yet Medal of Honor: Above and Beyond stutters and judders. The frame rates are all over the place. In moving sequences (where, for example, I had to shoot at enemies from the back of a moving truck), this choppiness led to some motion sickness. I haven’t felt motion sick in VR for a long time.

While my system is admittedly slightly below the ideal specifications, it performs wonderfully on the far prettier, and far more environmentally expansive Half-Life: Alyx, all of which leads me to believe that Medal of Honor is not highly optimized and that for a lot of players, the experience will be sub-optimal, forcing them to play at the lowest of the available settings.

Also, note that although the game will take up 170 GB on your drive, you’ll need around 350 GB of space to install it, half of which will free up again after installation.

Update: Installation process has been optimized and now the game only requires 180GB to install and will finally take up 173GB of space.

All these issues aside, the multiplayer gameplay looks like it’ll be a blast. The game offers five multiplayer modes; the standard Deathmatch, Team Deathmatch, and Domination modes are there. In addition, it also includes a Mad Bomber mode, that’s all about placing bombs, finding bombs, defusing bombs, and trying to catch your enemies unaware, as well as a Blast Radius mode which is similar to the King of the Hill modes seen in other games. It’s easy to get into a game, and up to twelve players can play together online.

At the time of writing, I’ve completed about a third of the single-player campaign, but haven’t spent much time in multiplayer because my time zone conflicted quite badly with the two online sessions that were hosted for preview purposes. So my time in multiplayer was mostly spent playing bot matches. Despite that, I can already tell that this will, by far, be the mode where Medal of Honor will satisfy most players. Whereas the single-player mode so far seems to fall short of my expectations, the multiplayer mode feels solid. It provides just what you’d expect along with a couple of extra mode and a few surprises, offers a good variety of levels and customization, and will provide far more longevity than the bite-sized scenes offered by the primary campaign.

We’ll have a full review for you by the release!