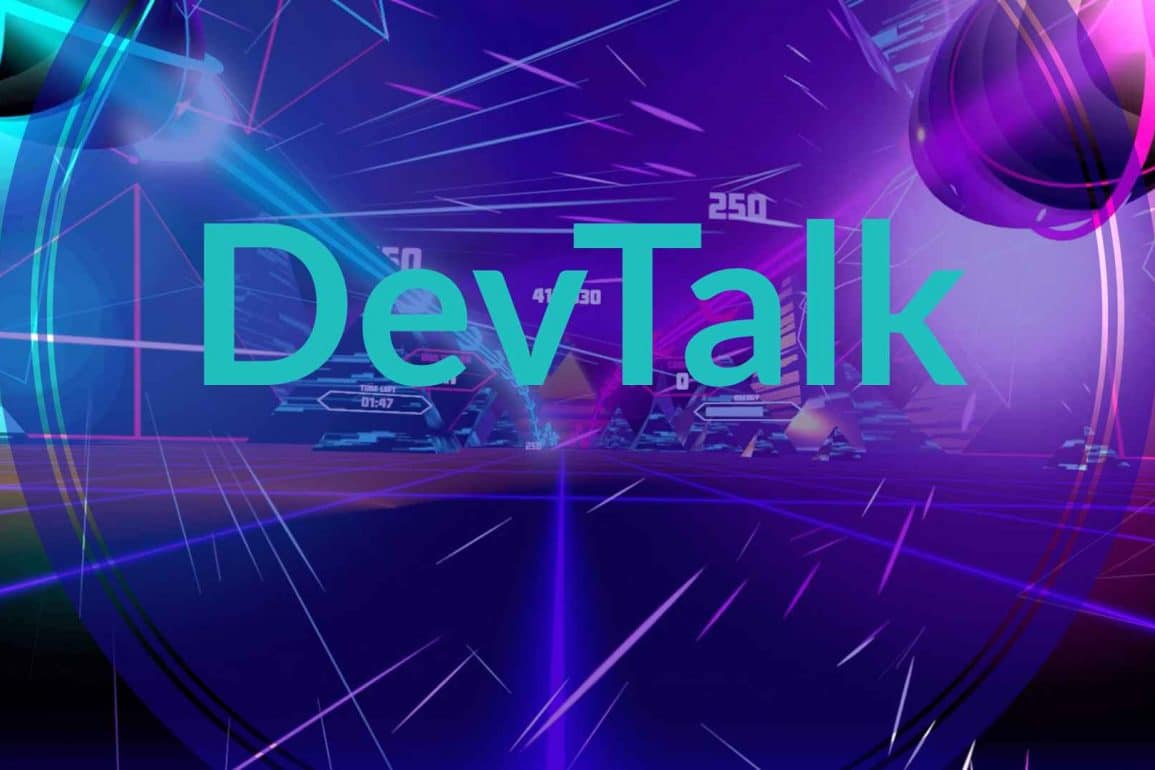 As fans of Beat Saber, fans of the Quest, and fans of rhythm gaming in general, we’ve been happy to see Synth Riders make the transition to our favorite little all-in-one VR headset, the Oculus Quest! We had some questions for Kluge Interactive, the developers of Synth Riders, and luckily we got them all answered by Arturo Perez, CEO of Kluge. Here’s our Synth Riders Q&A!

6DOF Reviews: With the dominance of Beat Saber in the VR gaming community, any rhythm games will obviously be compared to it. So, for users familiar with Beat Saber but not with Synth Riders, what are the most significant differences between the two titles? How does Synth Riders distinguish itself?

The thing that almost everyone points out when they start playing is how much fun the long note rails are to pull off. They really connect you to a song’s soaring intersections and make you feel amazing and so connected to the music.

The game is part dance and part action, rewarding users for precision while at the same time encouraging a lot more room for dance which allows a player to introduce their own personal style.

Synth Riders was conceived by our Creative Director, Abraham Aguero [Aguero designed and built Synth Riders, primarily with one other developer, Jhean Ceballos – Ed], who is part designer, part artist. You can see that in the overall energy and creativity of the game. Abraham is always adding new stages (we just released a Halloween stage through our community).

Many people who don’t know Synth Riders assume that we saw the success of Beat Saber and simply tried to copy the game. The reality is that both games were conceived, designed and built around the same time. Beat Saber came out six weeks before Synth Riders. We didn’t even know it existed and we had been working on our game for 18 months. Then, when Beat Saber landed and those Beat Saber videos started to go viral, it just took over the VR market and things haven’t been the same since.

Both Synth Riders and Beat Saber are rhythm games, and the category existed before both games were conceived. But the experiences are different; they both allow you to immerse yourself in music in a different way. We are huge fans of Beat Saber and we enjoy playing it too. We think the overall category is really exciting and we are just scratching the surface of what can be done with VR rhythm games.

6DOF Reviews: What genres of music are featured in the game? A lot of people are put off when rhythm games only cater to one type of music, how have you tackled this concern?

That is a great question. Because music is so central to the game, you are going to want music that you enjoy, especially after you have played it for a while and have begun to get good. Synth Riders has its roots in synth-wave music, but we’ve started to expand it from that core. We are really proud of the full release’s soundtrack, which is made up of three different music packs with tracks from Synthwave to FiXT, and Ninety9lives. Our synth-wave roots connected us to FiXT, which has a great roster of artists from Celldweller to the poppier sounds of PRIZM. With Ninety9lives we added a nice mix of EDM tracks. Currently, we have a total of 31 songs that represents a range of music styles that still feels cohesive and well-curated.

We started with hardcore synth-wave and have expanded to more mainstream tastes. We’ll continue to carefully curate our selection. Our studio started as a music magazine. Music is very central to us and we are very rooted in that world.

At the same time, a modding community has emerged and fans have begun to build their own tracks. So if you like the idea of creating beat-maps from songs that you love and own, then the choices are endless.

6DOF Reviews: Your factsheet mentions that the game comes with 31 songs, but you also provide an official beatmap editor. Can users easily import new songs into the Quest version? How does that work?

We have an official editor that we have built and open-sourced and you can simply drag-and-drop a beatmap and a song you want to play to your Quest! The easiest way to start with custom songs is to look at the guidelines that come with the editor.  You should also join the Synth Riders’ Discord and Synth Riders Mod discord. They are two very supportive and loyal groups of VR and Synth Riders enthusiasts who will provide lots of useful tips and answer any questions you might have.

For the most part, each track has the same five levels of difficulty, but there are a few exceptions as there are some songs that are not fast enough for the Master level of difficulty. Because our focus is more on enjoying the music, we don’t want to force every song to have a Master level. In fact, we are currently mapping some slower songs that might not even make it to Expert.

At the same time, some of our faster songs are getting even harder and more challenging. The goal is to maximize the enjoyment of each song and to make sure that the levels of difficulty are true across all of the tracks.

It was definitely all about 80s video games and movies like Tron and Blade Runner. Also, games like Thumper were a strong influence. We actually started an Instagram community called RetrowaveVR prior to the game because we are just obsessed with this aesthetic.

Just like with the music, we want to empower our community to build their own stages and create their own worlds beyond the 80s.

6DOF Reviews: You mentioned that the Quest version will have ‘social integration,’ can you explain what you mean by that?

Recently, Oculus introduced new social features that engage friends playing the same games on the Quest. In short, you will get a notification on your phone every time your friend beats your score in Synth Riders. If you are at all competitive, it really brings that side out of you and pushes you to get higher scores.

6DOF Reviews: You’ve promised that multiplayer is coming soon! How soon is soon? And how will the multiplayer work? Will it be co-op or competitive?

Sidequest: What Are You Waiting For??

By Tim Wilson
In Features

We hope to be testing it in the next two months and have it out towards the end of Q1 2020. This is a high priority for us. We hope to launch it as quickly as possible, but you know how these things can go. We want to make sure it’s the best experience possible! So stay tuned for more details.

6DOF Reviews: How did the gaming community impact the game’s development? What were the most surprising ideas proposed?

The community really played a massive role in shaping the game. They provided a lot of early feedback on a wide range of features from custom colors to fixed environment options, to pushing the boundaries of our maps. We’re always learning and listening to ideas they come up with. Many of the mappers in our community came from experimenting on map creation with Beat Saber and other rhythm games. Together it’s been a wonderful exploration as to how to interpret music in a meaningful way.

Challenging each other competitively is something they are always pushing. What started as a way to experience music in a new way has evolved into a type of e-sport.  We’re excited to see how that direction evolves as we develop multiplayer and continue to listen to their feedback.

6DOF Reviews: Synth Riders is available on Steam, and also as part of the Viveport Infinity roster. Without delving into specifics, how does this work out business-wise for you, and could you envision a similar subscription-based library system working on the Quest?

We see every creative model that helps push VR forward as a positive one. The goal is to get more users to experience the magic of VR. Viveport Infinity is a groundbreaking initiative and we’re are really proud to be a part of it. We keep our fingers crossed for the growing user base for Infinity. This model works for movies and now for video games, with initiatives like PlayStation Now. It can definitely be successful for VR, and I really think it could work for the Quest.

6DOF Reviews: What’s your opinion of the Oculus Link allowing Quest to act as a PCVR headset? Do you think it could lead to developers scaling back the production of Quest-only titles?

The Oculus Link is exciting because it means that Quest users can experience a step up in graphics from the Quest if they also have a powerful gaming PC. I tend to think having more options is always a good thing. For us, we put a massive amount of work, reworking shaders and models so that the game still looks amazing on the Quest. But, at the end of the day, the Quest still has limitations.

Within the modding community, having no limits on design and the freedom to create crazy, detailed stages with all kinds of advanced lighting is always a nice option. That said, we worked really hard to make the Quest version the “complete experience” of Synth Riders and we really believe the Quest is the device to help take VR to the mainstream. The “no wires” aspect in some ways really makes the Quest version of Synth Riders one of our favorite ways to play the game.

We’ll have our review out as soon as Synth Riders is released!