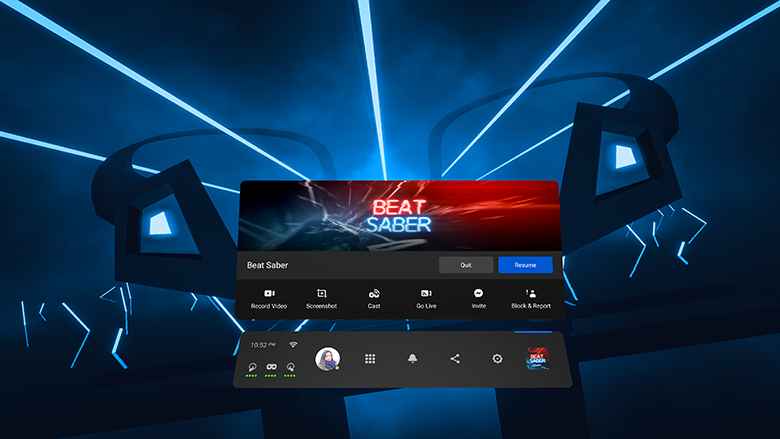 Well, who saw that coming!? While we’re all stuck at home playing Quest games and wondering where Facebook Horizons is and when it’ll be released, Oculus went on ahead and announced a new Quest System Update, bringing some major new functionality to the Oculus Quest interface!

The new features focus on multitasking and navigation and should start rolling out within the month. They’re designed to help users navigate between apps seamlessly, stay connected with others, and get more done.

The new update promises to make VR more flexible, social, and easy to use than ever before. It comes with a completely redesigned universal menu, new immersive overlays, and multi-window support for 2D apps starting with Oculus Browser—and these updates are launching as Experimental Features later this month.

The new universal menu coming with this Quest system update is a personal dashboard that lets users navigate between immersive environments and 2D apps, control their device, and stay connected with people and with your system’s status while in VR. Our new design organizes information more clearly and provides quick access to brightness and volume settings. It also brings frequently used apps front and center.

This will make it possible to bring up content, like the universal menu, without leaving whatever app you’re in, and that tools for sharing and connecting are easily accessible while you explore VR. Making a friend request, casting, or live-streaming are promised to be much easier to access. As developers add support, you’ll have instant access to your menu anytime and anywhere in VR. Yes, even while playing Beat Saber or shooting zombies in Death Horizon: Reloaded or Arizona Sunshine!

Multiple Windows in While Browsing

All these features will start rolling out this month, and you’ll be able to opt-in by going to the Experimental Features section in Settings and toggling the new features on.

You can read the Oculus Blog itself for more information!

Which of these features are you most excited about? More importantly, let us know which features you’d like to see Oculus implement soon!