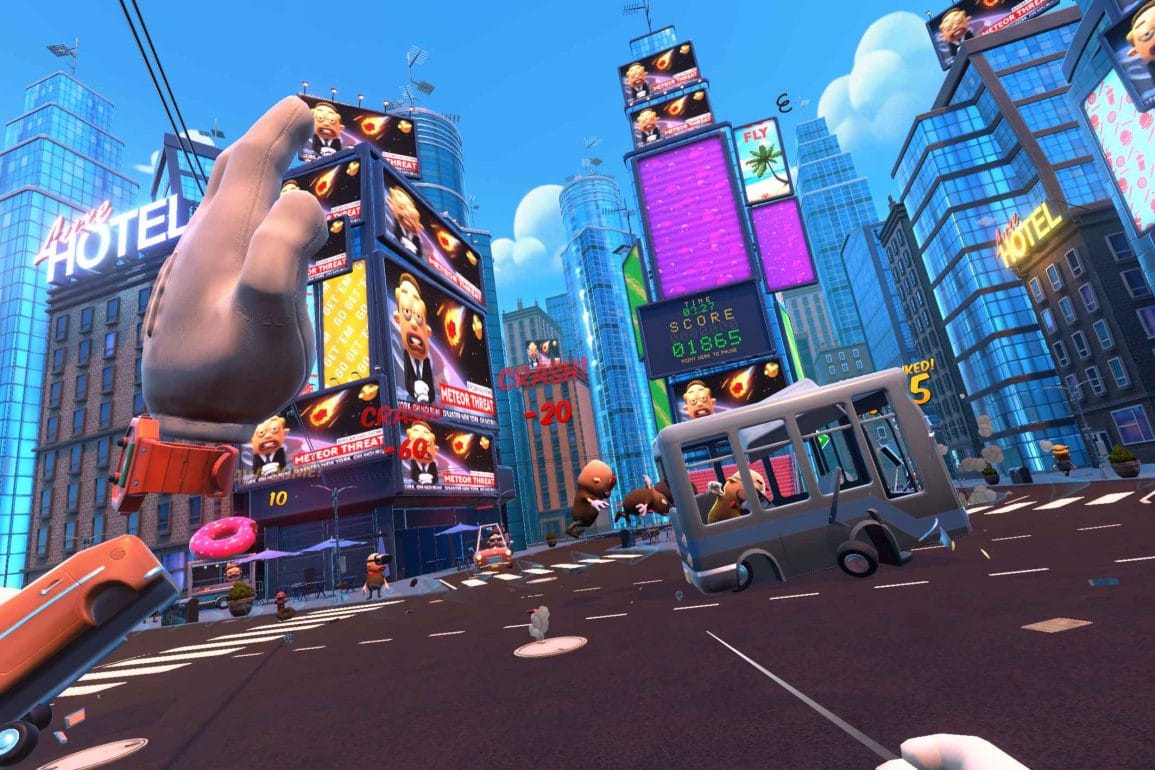 Today, Vertigo Games and Little Chicken revealed that their upcoming tongue-in-cheek VR game Traffic Jams is adding a frenzied couch party mode, that will be available at launch on Oculus Quest, PlayStation VR and major PC VR headsets in September of this year.

Like Acron: Attack of the Squirrels, Traffic Jams can be played using a combination of VR Headset and Mobiles!

Here’s the trailer, and below you’ll find more details from Vertigo Games:

Here’s the press release from Vertigo –

Traffic Jams’ couch party mode unites VR and non-VR players in a multiplayer experience that is both competitive and cooperative in nature. Up to 4 non-VR frenemies can turn up the heat as they work together to unleash chaos on the crossroads. With an array of possibilities at their fingertips, the mobile players can cause crashes, distract the VR player with annoyances such as bees and zombies and even break out the occasional meteorite – all while the VR player desperately tries to maintain order.

In the world of Traffic Jams, all traffic lights have gone out and you are the only one who can keep traffic flowing in the face of outrageous events and flagrant road rage. Starting out on a quiet corner in a small town, job offers soon start pouring in from iconic cities around the globe where it’s up to you to guide rude pedestrians, impatient drivers, and the occasional meteorite along before road rage strikes. Sound easy? Think again! This chaotic VR game throws in monsters, (un)natural disasters, and up to 4 non-VR friends in (couch) party mode!

In Traffic Jams, you’ll be taken under the wing of Dennis, the self-proclaimed world’s best traffic controller… EVER!!! He comes from a place called Jam City, which gets its name from its many flash mobs and packed intersections. Armed with dreams of superstardom, a sassy attitude, and fresh dance moves, he has taken it upon himself to teach YOU the ropes of traffic controlling (although between you and me, he’d rather be dancing). If you give him a chance, he’ll take you on a jam-packed global adventure to become the Ultimate Traffic Showman.

Made it to the top in career mode? Keep your VR headset cool as up to 4 non-VR friends turn up the heat in (couch) party mode, or climb the global ranks!

Published by Vertigo Games and developed by Little Chicken, Traffic Jams is releasing on Oculus Quest, PlayStation VR and major PC VR headsets in September of this year.