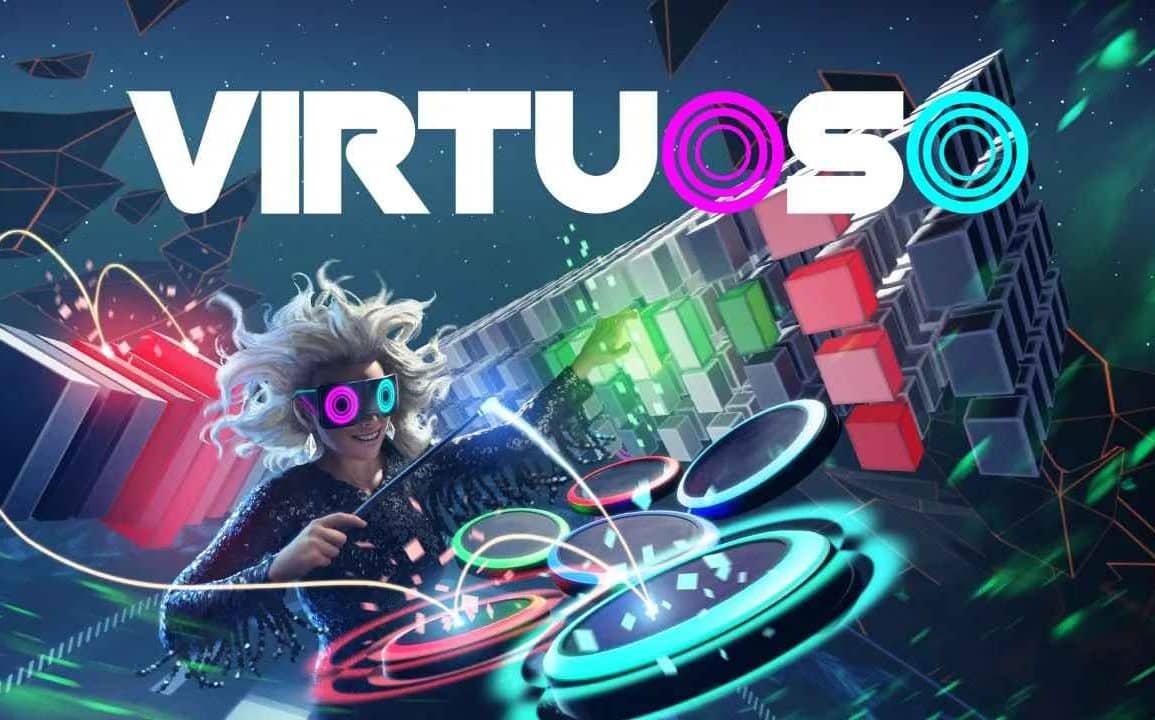 A while back, a little known Virtual Reality music-making app made its way to Quest by way of SideQuest! We downloaded it and since our multi-talented team here at 6DOF Reviews includes at least three musicians, we enjoyed it a great deal. Well, Virtuoso is now all grown up and developer Reality Interactive has teamed up with Fast Travel Games (publishers of Apex Construct, Budget Cuts 2, The Curious Tale of the Stolen Pets, Wraith: The Oblivion, and the upcoming Cities VR) to bring Virtuoso out of the shadows of and into the official Oculus / Meta Quest Store.

For some odd reason, some of the marketing for the app calls it a ‘game’, even though it’s decidedly not a game. We’ve seen this happen before with Lost Recipes, for example. It seems that marketing departments feel that ‘games’ sell better than ‘apps’, but we at 6DOF Reviews consider that misleading at best, and perhaps even disingenuous. The fact of the matter is that Virtuoso is a music-making app – it’s a lot of fun, but just because something is fun, doesn’t make it a game. Alright, time to get off the soapbox…

Fast Travel Games has today announced that Virtuoso, a virtual music creation sandbox that lets anyone bring melodic creations to life in VR, will make its debut on Meta Quest, Rift and SteamVR on March 10, 2022. Created by the studio Really Interactive, Virtuoso brings an immersive musical stage into your headset. The Virtuoso demo tape… or rather, announcement trailer… features the track “Parade” by Scandinavian dance music duo Tungevaag & Rabaan recreated in-game:

From their press release:

Explore the unique instruments and effects of Virtuoso to find your personal sound and bring out your inner musician. With instruments that have been specifically tailored and tuned for virtual reality, as well as an interactive tutorial, you’ll go from music class dropout to worldwide pop star in no time. Use the Looper tool to become a one-person band, creating dance floor ready jams on the fly. Save and share your creations with friends and gain inspiration from other members of the Virtuoso community.

“Virtuoso is a new take on playing and creating music that is both accessible for complete beginners and amazingly powerful in the hands of experienced musicians,” said Jonatan Crafoord, Creative Director and Co-Founder of Really Interactive. “The instruments are built from the ground-up for expressing yourself musically in VR, while the tools and interactive tutorial help you stay on beat and in tune. We can’t wait to hear the music that the Virtuoso community will create in it!”

Key Features of Virtuoso include:

When it arrives in March, Virtuoso will be the first third-party title published by Fast Travel Games’ recently-launched publishing arm.

Fast Travel Games is a VR exclusive games developer and publisher based in Stockholm, founded by industry-leading veterans and behind critically acclaimed VR titles such as Apex Construct, The Curious Tale of the Stolen Pets and Wraith: The Oblivion – Afterlife.