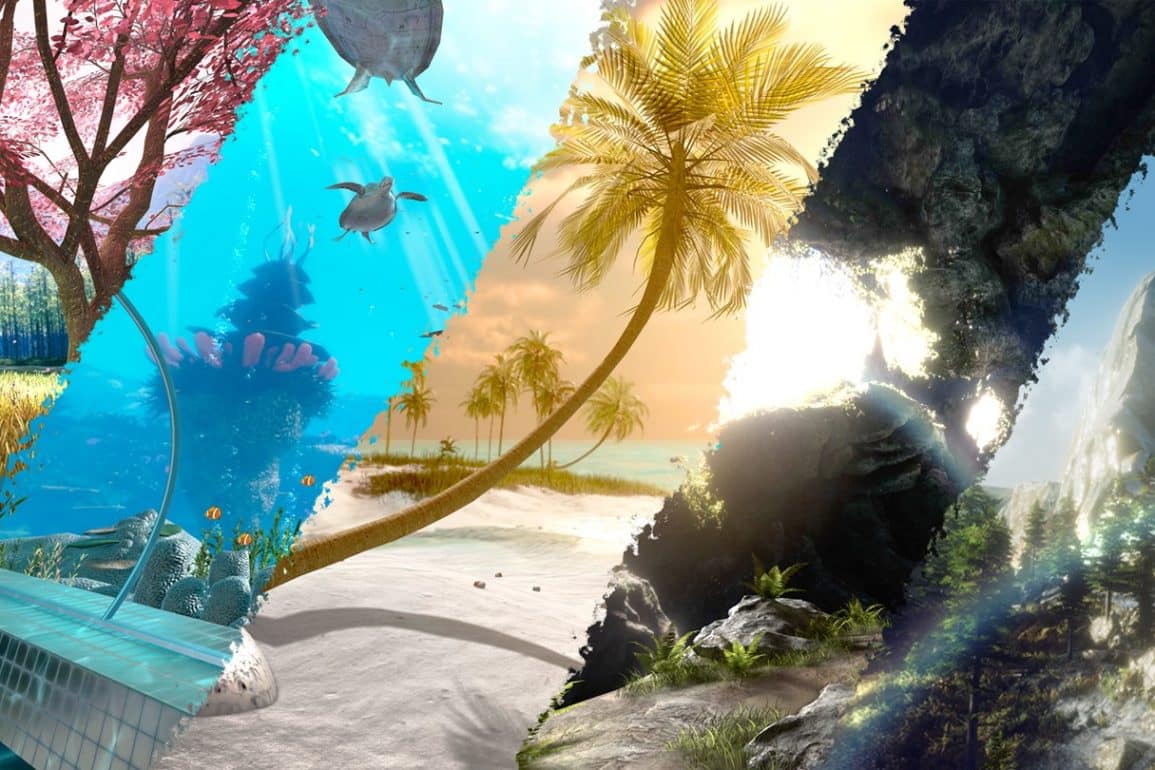 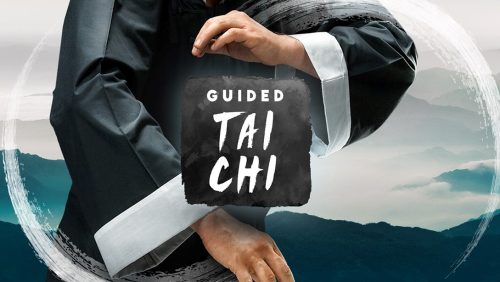 You’re standing near the edge of a cliff above a gently flowing river. Above you is a clear blue sky. In the distance, a waterfall cascades down a steep granite slope. Birds chirp around you as gentle music plays. On either side of you and in front of you, Tai Chi masters are encouraging you to mirror their slow, controlled moves. You do, almost exactly. The four of you move in perfect synchronization as a woman’s disembodied voice reminds you to control your movements and relax. All too soon, your time together is done. You feel relaxed and balanced.  This is how I start and end most days thanks to Guided Tai Chi.

Guided Tai Chi is not a full-on Tai Chi tutorial designed to turn every player into a Tai Chi master. Likely, a real Tai Chi enthusiast would find this app lacking, as it focuses on the relaxation and meditation aspect of Tai Chi, rather than Tai Chi a martial art. The entry bar is relatively low, and the instructions are easy to follow. To play, all you do is select a five-minute “Flow” guided program or three-minute “Arcade” challenge.

In the guided program, you select from a long list of inspirationally titled programs and the scene you want to practice in, then you’re transported to the relaxing setting of your choice to begin your session.

Your hands are represented by two orbs. Your left hand is a black orb, and your right hand is a white orb. Your goal is to keep these orbs in the center of their circles as they move. There are thin black and white tracks that the circles will follow, so you have an idea of what to expect.

Helping you through the motions are two footprints on the ground to show you where to place your feet. You also have transparent Tai Chi masters on either side of you and in front of you to imitate. You’ll also see a timer counting down your session and a transparent image of the footprints as an additional guide in case you don’t want to look down. None of the moves require much coordination or balance, except for one that requires you to lift one leg for a few seconds. You do have the option not to see the foot guides, but I find them useful.

One frustrating aspect of the guided program is that the transparent masters are all facing forward, and they’re only somewhat transparent, which makes it a little challenging to see precise hand movements. Of course, you can look to the side to see this detail, but keeping turning my head from side to side was a little distracting.

As you follow the movements of the transparent masters, soft spa-type music plays, and a disembodied woman’s voice gives you encouragement, affirmations, and advice. As the session comes to a close, the woman’s voice thanks you. I thought that was a nice touch.

One five minute session is very relaxing and almost feels too short. If you do more than three sessions, your arms will start to burn. If you have a lot of time on your hands, you can choose to do a sixty-minute “world tour,” which consists of 12 random five-minute programs and scenes, which feels to me to be too much. I found myself wishing there were a few 10-15 minute continuous programs to choose from, just for a little more variety.

The developers of Guided Tai Chi are aware that their app is being used on a VR gaming system and added the arcade mode as a little mini-game. Here, you can pick your three-minute challenge and your scenery (or choose the random option), but as an added bonus you also get to select from a list of slightly more upbeat, rhythmic music.

Best of the Quest | The Newbie Guide

Once you make your selections, you are again transported to the scene you chose, but there are no masters to follow and no nice lady to encourage you kindly. Your goal is once again to keep your orbs in the corresponding circle as they move, but this time you’re playing for points. Every few seconds, points are added to your overall score, which is pictured right next to the timer. The longer you keep your orbs in the circles, you’re rewarded with a points multiplier that increases every 10 seconds or so. The points multiplier appears in the center of your orb so you can keep track of it as you play. This function is quite sensitive: if your orb veers out of the center of the transparent circle for even a second, bye-bye multiplier.

At the end of the short three-minute challenge, you see your score relative to other players. I’m not sure if the game is stroking my ego or if I’m somehow a Tai Chi natural, but I usually come in the top three most of the time.

I do enjoy this mini-game within Guided Tai Chi. The length was just right, and it requires a lot of focus. I really only found that I had two small gripes. The first was that the multipliers were different for each hand, so if your left hand messed up and you lost your multiplier, each hand would show the score pop up, and their multipliers increase at separate times. Maybe I have OCD, but this drove me nuts. More than a few times I found myself deliberately tanking the other orb just so both spheres would score simultaneously OR I would just restart the challenge altogether. What? Don’t look at me like that! I’m competitive, even when I’m trying to relax.

The other thing that bothered me is that the points for each hand would pop-up next to your orbs every few seconds. I found this distracting, and sometimes losing that focus would reduce my ability to keep my hands moving in line with their respective paths.

Guided Tai Chi is more of an app than a game, even though it does have the one game-like setting. This isn’t a game you’ll get addicted to and need to play for long hours at a time. But it is incredibly relaxing, almost like a meditation quick fix. I find myself using Guided Tai Chi every day for just that reason.

I usually start and end each VR session with one or two of the hundred guided programs. After sweating with Beat Saber or slaughtering Ninjas in Ninja Legends, its a great way to wind down and transition back to the real world. There have also been times when I’ve been incredibly stressed out and found myself putting on my headset ONLY to do a session of Tai Chi.

While there is a wide variety of programs, I have to say that there isn’t much variation between them. There are only 20 different hand motions, and there is no real skill level progression, which the more I play, the more I want. If anything, Guided Tai Chi made me interested in finding a local real-world class to explore the martial art of Tai Chi for a bit more challenge.

Eventually, users might find the limited number of scenes tedious: there are only about ten. There is some playful variety. There is a delightful underwater setting where you are placed at the bottom of the ocean surrounded by cute cartoony sea creatures. There is one scene where you are placed on the giant chessboard in central park. Personally, I would have liked to see some nighttime or twilight scenes, especially when I was playing in the evening.

While these scenes are undoubtedly beautiful, they also vary in artistic quality. Some aspects of the scenes are very realistic. The skies and running water are so well rendered that they are almost like photographs. Other elements are more cartoonish and obviously computer-generated. The grass on the mountain tops or in the gardens, for example, are rendered in angular, unnatural straight lines. There were just one or two grass objects drawn and then copied repeatedly. While I don’t think I would have minded consistent cartoon quality scenes, the disparity between the realistic elements and the poorly rendered ones becomes painfully apparent when they are juxtaposed in the same scene and takes me out of it just a little bit.

No experience is required to try Guided Tai Chi. While you may become more adept in the balance and control, the app as it is right now is limited in terms of skill progression and might become too simple over time.

All that being said, there is an unexpected benefit of the game: The strength workout. The slow, controlled motion in Guided Tai Chi is similar to isometric holds. This benefit becomes a lot more evident if you do more than two five-minute sessions in a sitting. If you actually make it through the world tour, you’ll actually sweat from the effort. If you do at least two short programs four or five days per week, you will notice some new muscular definition. I wasn’t expecting that to happen, but it was a pleasant surprise.

[Editors Note: It does feel a bit weird to do Tai Chi with both your hands tightly held around the controllers rather than open and relaxed. The easiest way around this – is to use one of the controller grips available for the Quest (the Mamut grips, the AMVR grips – which we favor, or the Orzero grips), any of which would allow you to play with open hands while retaining full tracking – it’s also a great way to support our site with no additional cost to yourself!]

Guided Tai Chi simultaneously encourages you to move and to relax. Beginning and ending your time with a short five-minute Flow session is a great way to transition from virtual reality back to the real world and give your body and mind a break from some of the adrenaline-fueled adventures and vice versa. This app really shows the potential for a class-based fitness game, like Yoga or even a proper Karate class, even if Oculus doesn’t yet track foot placement. 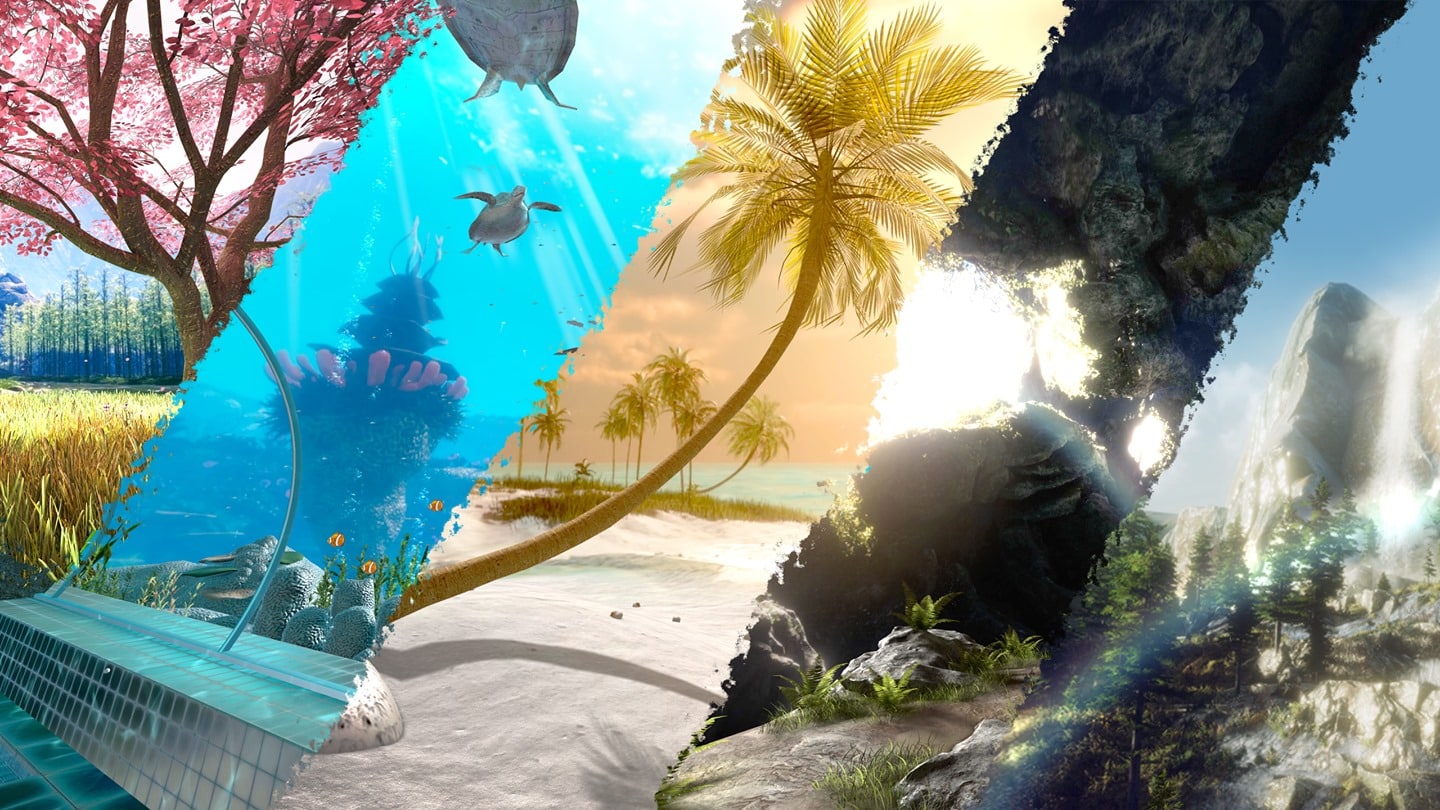 Guided Tai Chi
TLDR : Summary
Guided Tai Chi is a very relaxing way to experience virtual reality and may help tone your muscles if used consistently. However, over time, you may find yourself craving a little more of a challenge.
Concept
8.5
Interface
7
Functionality
7
Value
7.5
User Rating0 Votes
0
Pros
Relaxing
Can be a strength workout
Some great environments
Cons
Could use more variety
Movements not always clear
7.5
Good