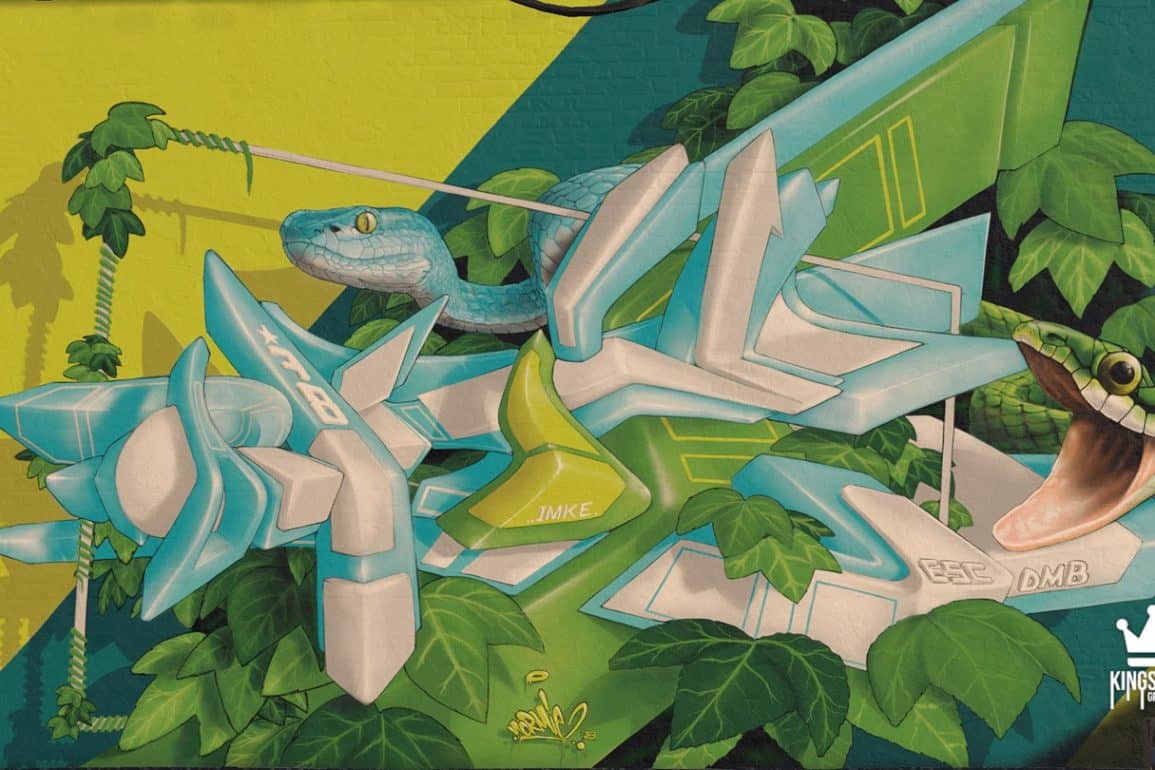 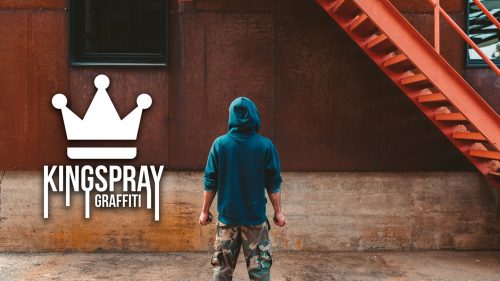 Now here’s a novel and lovely idea for VR: a graffiti simulator. A simple pitch, and an intriguingly unusual one. There are plenty of art and design apps for VR, of course, and the Quest has got three of the best in Tilt Brush, Gravity Sketch and ScuptrVR. But Kingspray Graffiti has a refreshing clarity of purpose, setting out to emulate the experience of creating urban graffiti art – from the environments to the sounds and music. To some, it’s going to be familiar, to others, it might as well be an alien world.

For this review, we’re changing things up a bit, as I’m lucky to know a community of excellent local graffiti artists who are masters of their craft, so we’re going to let a couple of them have their say on Kingspray Graffiti.  Ravesh D. and Lukas had never used VR before, so we had an hour before firing up Kingspray letting them get a feel for using the Quest, which more than impressed both of them. Once they’d both started to get their heads around it (and I initially had to promise them we’d come back to Superhot to get them to change to Kingspray), they gave this title some serious attention.

I’ll convey their individual thoughts on the title, and then offer my own notes and score by way of our ‘official’ review.

This is insane. This is the future. I can’t believe you can do this, man. I’m pretty good with a can in reality. I can truly say that I can do anything I’d want to do in this virtual world. It’s crazy. I mean, it lets you do stuff you wouldn’t get away with too, without getting in masses of grief. Like, I can tag trucks and trains here and take my time over it. But the cans work just how they should too.

You have to get good and be good to get a good result. But the thing is I must have spent aw man, a lot of money on cans to get good. A lot of money. And that’s not having the other stuff too, like all the tips and the pearlescent sh!#. Hundreds of colours and finishes here, it’s @!#*ing crazy, though. I’m trying stuff on here that I have never tried out there. I can’t afford it! And you move around just like you’d expect. For me, it’s the feel. You forget you’re using the control things and just… It tricks you into thinking you’re using a can, and it acts just like it. Obviously, the shape of the can’s different, yeah, but I mean the feel is the same. And the menu sh!# isn’t complicated, it kind of acts like you’d expect. Obviously, in the real world, you wouldn’t have a million colours or whatever.

Ohhhh, the drips, man. It’s just what it should be like. And no undo thing. If you @!#* it up, its gonna stay @!#*ed up until you spray over it, I like that. If you’re starting out with graffiti, you going to get used to that real quick – because it’s costing you a lot of time and money. I wish I would have had this, man. You know, four years ago. It feels natural and real. It’s a bit @!#*ed up you can’t spray on some of the bits, like in the subway train bit. There’s some places the paint won’t take at all, like the computer is like, blanking you. So that’s weird. It reminds me of the fact I’m not actually doing it. But man this is @!#*ing crazy, I need one of these. I wish it did this thing where you could smell the cans, that paint smell as it comes out, though! That’s the only thing I would say is really missing.

I don’t know if you can say this in your review, but you should give this a ‘holy sh!#’ rank, or something. I mean I don’t know the tech at all, I’ve not used this, I’ve got a PS4 and my phone, and I used that cardboard sh!# thing to watch videos. But that was bad, right? This is… I mean, I can’t believe it if I’m honest. Now I’m out of it I can’t stop thinking about it. I didn’t even think you’d ever be able to do this, because it’s a Matrix kinda deal. It’s the vibe, yeah?

I mean I was saying to Rav, you run out of things to say because it’s real. You don’t think when you’re spraying ‘oh this is real, this is blowing my mind’. You just get into the zone with it. You forget you’re in there. I just concentrate on what I’m doing. It’s so awesome, I can’t say. I love that you can just walk around, you can pick a spot, and have at it, yeah? It’s so much freedom, and no-one’s gonna have a go at you for it.

ALL YEAR IN THAT VIRTUAL THING

If it was me, if I was really picky, I’d say let me head out with a few cans. Just pick the cans you want from the shelves and head out then. So you’d be picking up the cans from your bag or the floor, you know the colours you had. That’s when it makes me feel I’m in the virtual world, the menu and the picking colours from a wheel. It’s like an app then, not the real world. But I get to use a hundred colours at once here. Makes me look better than I am. I normally do monochrome, black and white, two or three colours. It’s how I learned because it’s cheaper and it’s less to carry. But man, I could spend all year in that virtual thing, seriously, because you can just let your mind run free with it. All over.

Did I say about the music? Oh man, I thought I was going to just slide on Spotify and use my own playlist or whatever, but Kingspray Graffiti has some tracks I never heard before that are @!#*ing A, and they aren’t even in a genre really or anything. Usually, when they do ‘street’ stuff like this you get some guy from EA, some office guy, sat in his office thinking ‘we’ll put some NWA on yeah?’ and that’s it, but this is all over the shop! It’s great, and I wasn’t expecting it. It’s so chill, the tunes and vibe of it, I wish it could be like that more often outside.

I’m not a professional graffiti artist by any means, but I find Kingspray Graffiti every bit as wonderful as Lukas and Rav do. It’s a liberating and extremely well-executed title, with a huge amount of attention to detail. Everything feels convincing and slick, and there’s a pleasing array of environments to explore and spray away in. The graphics are very impressive, and the sound is acutely observed and immersive.

A special mention must be made of the soundtrack. There’s a lot of really excellent music on Kingspray Graffiti that suits the title perfectly, some of it entirely unexpected. It’s presented as different ‘radio’ stations, so there are different moods, all of which are surprisingly likeable and groovy.

Editorial note: Sadly, the Scrcpy capture of the Kingspray Graffiti session with Rav and Lukas didn’t work out, but they have both agreed to record another and bring some graffiti artist friends along with them… So look for another 6DoF Kingspray feature soon! 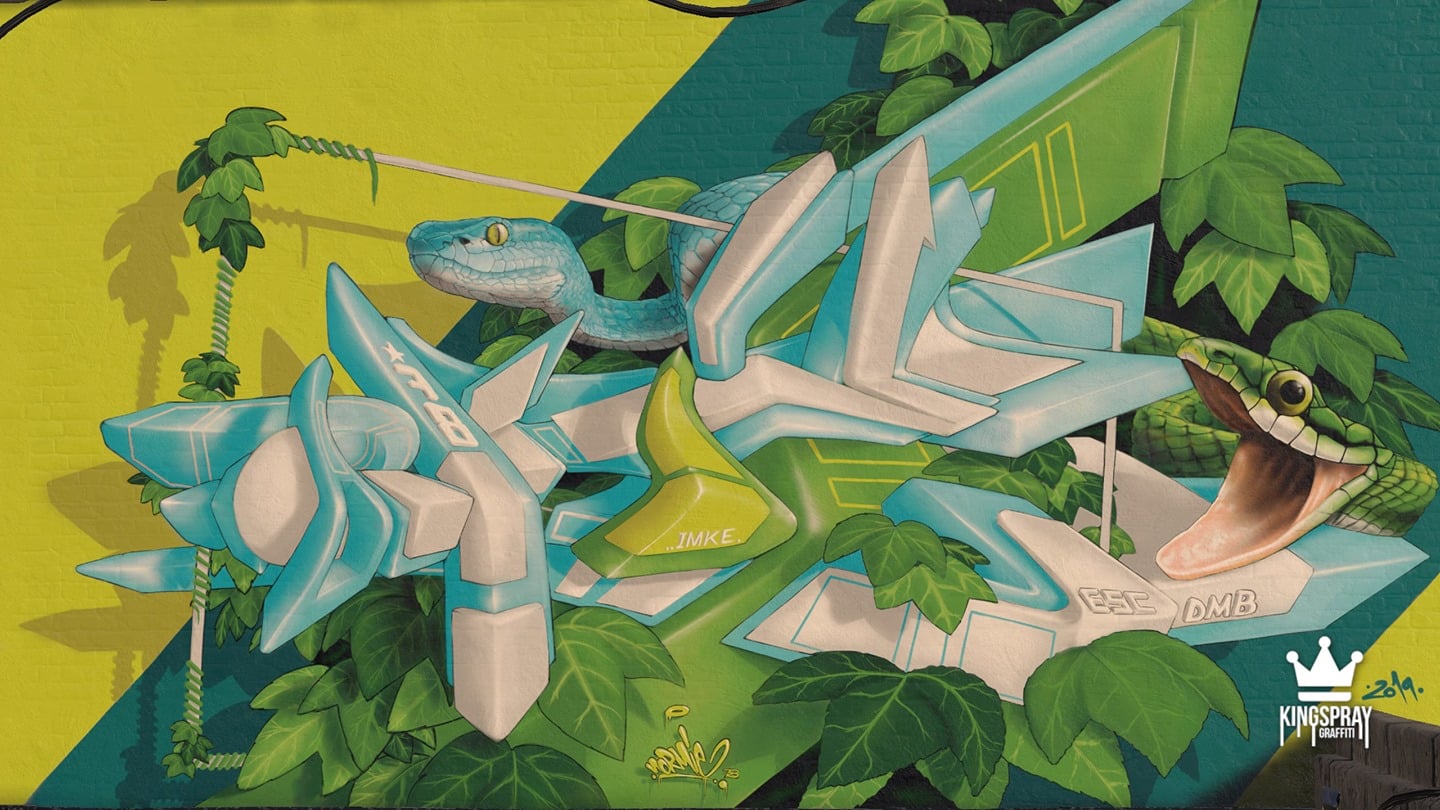 Kingspray Graffiti
TLDR : Summary
A superb title that's pretty hard to fault. It's slick and entertaining whether you know what you're doing or not, and the sort of thing everyone will love mucking about with. A very reasonable price, too.
Concept
10
Interface
10
Functionality
9
Value
10
User Rating0 Votes
0
Pros
Does exactly what it says on the can
Loads of options
Perfectly realised, for pros and amateurs alike
Great music
Cons
Some won't like the lack of an 'undo' button
9.5
Superb