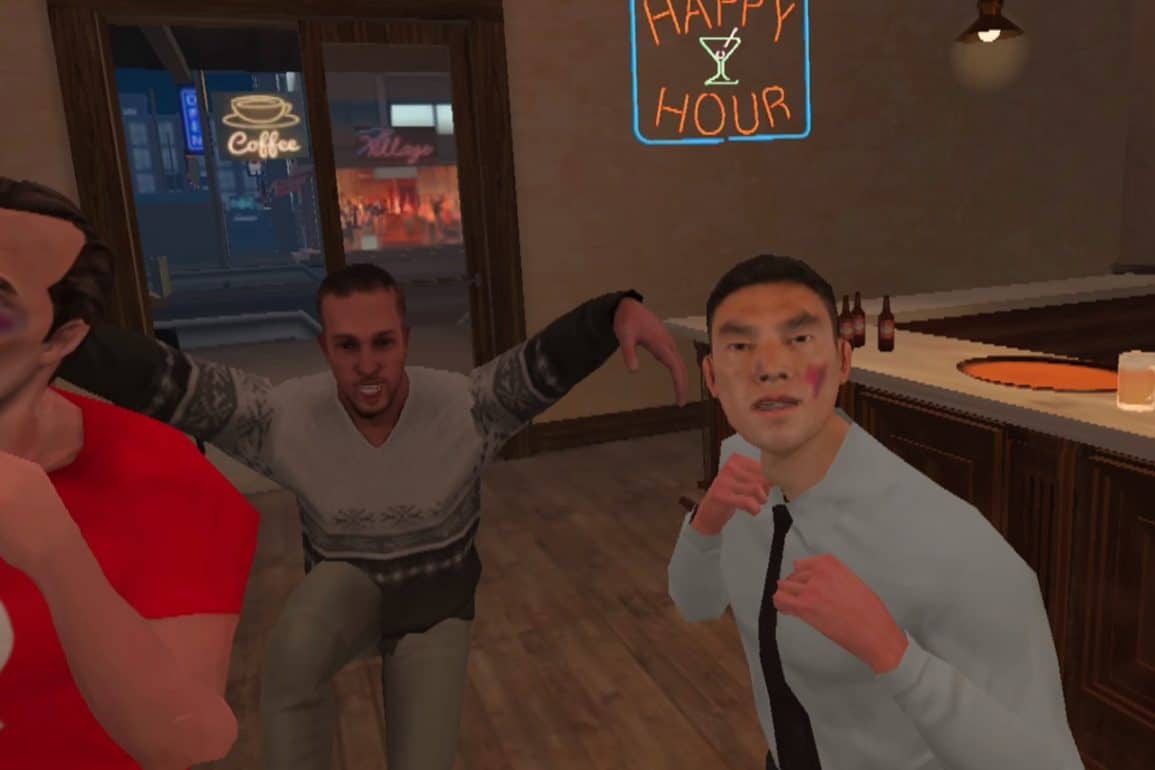 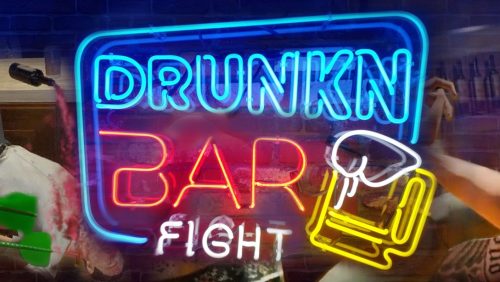 Bar fights are a staple in Hollywood movies, and for a good reason – they can be a lot of fun. They’re also an excellent opportunity to make viewers realize just how tough a character is, and, more importantly, his values. In Second Hand Lions, Robert Duvall, an old man, is bullied by some younger bar patrons. Before he proceeds to beat them up, he says “I’m Hub McCann. I’ve fought in two World Wars and countless smaller ones on three continents. I led thousands of men into battle with everything from horses and swords to artillery and tanks. I’ve seen the headwaters of the Nile, and tribes of natives no white man had ever seen before. I’ve won and lost a dozen fortunes, KILLED MANY MEN, and loved only one woman with a passion a FLEA like you could never begin to understand. That’s who I am.”

Bar fights make for great movie scenes when they’re placed into a context that gives value to the conflicts. Without context, a bar fight is just a meaningless montage of violence.

Remember The Complaints About GTA?

When the non-gaming audience found out what gamers could do in GTA, the game became (at least for a while) pretty controversial. Parents didn’t want their kids playing a game that allowed gamers to have sex with a prostitute, murder her, then steal her money. I didn’t mind because, well – if you did that, it was entirely your choice. It wasn’t something the game required you to do. GTA gave us a systemic open world, and we were free to use or abuse it.

But whereas GTA gave you an expansive world rendered with state-of-the-art technology, and remains, to this day, a game that you can play over and over again, Drunkn Bar Fight feels cheap. The greatest crime Drunkn Bar Fight is guilty of is that the fights are devoid of context. The second crime is that the game offers you little to no choice.

Let’s Beat Up Some Stereotypes

Drunkn Bar Fight starts with you standing in the street, in front of a few bars. Your phone rings in your left hand, and that’s where it materializes. Your phone is your menu screen, where you can change some basic settings.

All you really can do is to walk into one of the nearby bars or a back alley. This is how you get into the game’ levels,’ of which there are four. Once you’re inside these locations, you’ll find nothing to do at first, except listen to NPC characters that are supposedly funny but are instead, offensively stereotypical. No story evolves, and there’s no plotline to the narrative. In fact, there is no narrative at all.

All you can do – all that the game wants you to do – is beat up the stereotypes. Let’s beat up the flakey gay guy! Don’t you want to beat up the boorish biker?! Let’s beat up the nagging women! The greatest failure of Drunkn Bar Fight is that it provides no context for the fighting, no clever writing or dialogue or cut scenes are employed to explain why these fights are happening, or why we should care.

As video game players, we don’t always need a complex narrative, but we’re usually at least told that we’re saving the world or a cute princess named after a fruit. Sometimes we’re just helping out a mouse.

Mindless Violence Does Not Make For Mindless Fun

Remember MadWorld on the Nintendo Wii? MadWorld promised “exciting, visceral” gameplay, and it delivered in spades. Now, many years later, I couldn’t remember what the context for the violence was, but I do remember the violence itself – because it was glorious. MadWorld gave you a stark black and white world colored only by gushes of red blood, and it did this on a Nintendo console, of all things. You could rip people in two, you could throw them under giant spiked machines that would splatter them all over the place. It was gory, it was brutal, and it was delightful.

Remember when I said that the greatest sin committed by Drunkn Bar Fight was that the fights had no context? I was wrong, the greatest sin is that the battles are tedious. There are no combos to speak off, no power-ups, and no apparent multipliers. There are objects in the environments that you can use to attack the NPCs, but they’re predictable; pool cues, bar stools, beer bottles, etc.

Bartender, My Beer Is Flat

You don’t even need to be particularly skillful. All you really have to do to beat characters is to hit them repeatedly while making sure they don’t hit you. It requires some speed and some basic situational awareness, but it’s nothing that a seasoned gamer would find challenging or, for that matter, rewarding. To test just how simple it is, I went into one of the bars, started the fight, and literally just waved my right arm horizontally for a few minutes, believe it or not, that was enough to beat the level.

Too many things also don’t work the way you’d expect them to in Drunkn Bar Fight. When I tried to grab bottles by the neck (to smash them against a table and use as weapons) the game invariably had me grab them by the bottom, so all I could really do was break them against the NPCs. When I tried to grab stools (to break them against enemies), that didn’t always work out, either. The gameplay is wonky, and the gameplay opportunities that it seems to provide don’t really work.

At one point, after I had grabbed a guitar from next to a table and broke it on somebody’s head, the guitar just rematerialized next to the table. Only this time, I couldn’t pick it up. Why? I don’t know. In another bar, I grabbed a mic stand and hit somebody with it, then, for fun, tried to poke it into the ceiling fan just to see how the physics model would react. It didn’t.

Let’s Not Be Shy

Some reviewers might shy away from telling you just how bad this game is, and we understand the politics of their diplomacy. However, we believe readers read reviews precisely because they want to know what a reviewer thinks of a game, even if they themselves might have the political and social sensibilities of a honey badger.

Coulda Been a Contender

Drunkn Bar Fight disappointed me on all levels. I had the advantage of coming into this game out of the blue. I had, literally, never even heard of it before a review code landed in my inbox. The premise sounded exciting, the game was not.

The core idea of a game focused on bar fights offers tremendous opportunities and could have been ideally suited for the room-scale virtual reality experience that the Quest enables. Drunkn Bar Fight could have given us some narrative context that gave meanings to the fights. It could have introduced the main character as a lonely stranger passing through the city, getting forced to fight bullies to protect himself or to help others in need. We could find out more about his backstory from NPCs that would recognize him in those bars, and help flesh out the narrative.

You Can’t Handle The Truth

The game just isn’t that ambitious and contents itself with promising players the ability to perform “socially unacceptable behaviors” without dealing with their consequences. This is a fantastically low bar. What’s next, a game that simulates spitting on people? If this is what my Quest is for, I’ll go back to the Wii.

The graphics also could have been much better. We know that the Quest isn’t a polygon-pushing polymath, but when a game only has a few simple environments, there’s absolutely no excuse for them to look so drab. We’ve all seen Red Matter, and developers need to understand that our expectations have been raised accordingly.

They Say The Oculus Store is Curated

Many developers have complained about the curation process on the Oculus Store, saying it’s not easy to get games approved. The curation has been controversial because some gamers feel that Oculus is keeping good games from them. Others think that it’s good to have high standards, and I usually lean towards the second camp. However, if the release of Drunkn Bar Fight on the Oculus Store proves anything, it’s that those standards cannot be taken seriously. How is it possible that this got approved while Crisis VRigade did not? I don’t know. It’s a mystery only the world’s greatest detective could answer.

This Bottle Is Empty

The game is a singleplayer experience and has four bars to visit. The variety of NPCs that you beat up is limited. If this is the kind of game that you enjoy, you’ll soon find yourself running out of offensive stereotypes to beat up. When you ‘finish’ a level by beating everybody up, you get a scorecard. The scorecard shows how many punches you threw, how many KO’s you made, how long it took you, and what new moves you discovered.

Drunkn Bar Fight is a shallow, short-lived exercise in game programming that belongs, at most, as a freely available download on SideQuest, where it would be overshadowed by some truly great titles available on that platform. It’s not a game that you want your children to play, and it’s not a game you’ll get much mileage out of. If you want a physical brawler, get Creed instead.

Drunkn Bar Fight
TLDR : Summary
Not so much a game for tough guys as a game for people desperate to feel tough, Drunkn Bar Fight is a misbegotten demo you're being asked to pay for.
Concept
1
Gameplay
3.5
Graphics
2.5
Audio
4
Longevity
2.5
User Rating5 Votes
7
Pros
You get to fight in bars
Music's not bad
Cons
Mediocre everything
Shallow gameplay
2.5
Feeble