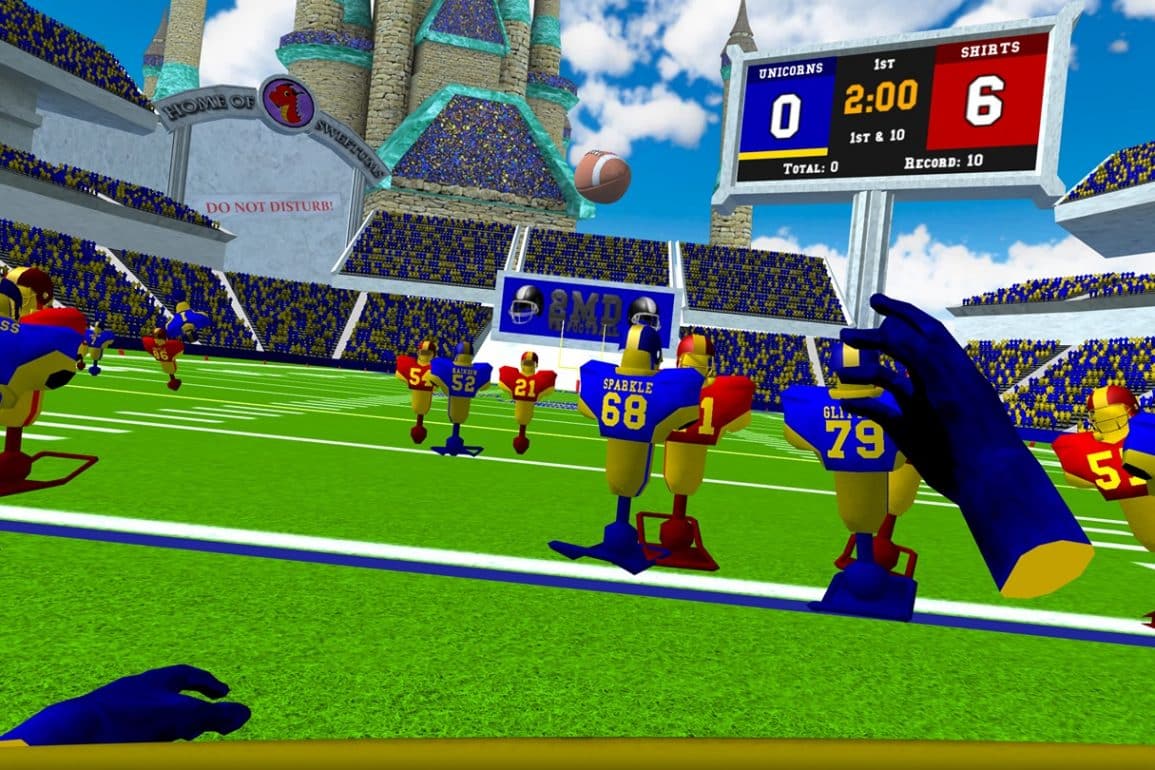 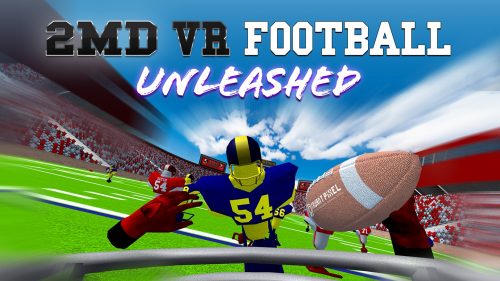 Let’s get this disclaimer out of the way; I am probably the person least qualified to review 2MD: VR Football Unleashed. I’m not a football fan, and the closest I’ve ever come to playing anything like it is when I played some rugby back in school. Don’t yell. I know rugby is nothing like American football, and I don’t mean to insult readers on both sides of the ‘pond’ by implying they’re similar. If anything, this should underscore what I’ve already said; I’m not the best qualified to review this. So take this entire review with a grain of salt. I have, however, played video game football, and I do know the basic rules of the game.

What’re you doing with that pig?

2MD: VR Football Unleashed puts you in the shoes of a football quarterback, what this means in practice is that you spend most of your time throwing the pigskin around. Games last two minutes, and you’re always playing offense. There’s no season mode, and the campaign essentially has you playing against six different teams. Beat them, and you’ve won.

The gameplay options are limited, the game doesn’t really let you build your own team, but it does let you customize your costume to some extent, so you can approximate some team appearances if that’s something you’re interested in.

The real pull of the game is that it offers relatively natural throwing motions. You hold the football the way you’d expect, and you pull your arm back, swing it forward, and off it goes. The throwing mechanics, which are the main focus of the game, are quite good. The developers must be commended for this since we all know the Quest can’t track your hand once it’s moved behind the front of your headset. I can only assume there are some nifty coding tricks being used that allow them to extrapolate your throwing power and direction by detecting where your controller was and how fast you were moving it before it disappeared, combining that with where it shows up again and how fast and in which direction it’s moving, and somehow putting all this together to create a surprisingly accurate estimate of where you were trying to throw the ‘ball’ and at what strength. Pretty impressive stuff, and if you play for long, your arm will certainly feel all the throwing.

Back To The Drawing Board!

The other main feature the game offers is the chance to create custom plays. Rather than relying on a static playbook for your plays, 2MD: VR Football Unleashed allows you to use a marker to draw custom plays with your hands, and then select those during the game. So you can create all kinds of crazy plays and runs and later try them out and see how well they play out. This feature alone will likely keep football fans busy for quite some time. The game’s AI also adapts to your plays, so if you try to perform the same plays over and over again, it will punish you for it.

The graphics in 2MD: VR Football Unleashed are quite simple. Rather than seeing real football players on the field, all players are represented by tackle dummies. All the players are tackle dummies, yourself included. This style might not endear it to people who want to see great graphics, or who might’ve been expecting some VR version of Madden, but then again, Madden doesn’t let you feel you’re on a football field and certainly doesn’t let you throw a football around as though you’re a real quarterback. The audio is equally functional and not designed to impress.

Pick Up & Play, But Not For long

The game’s designed to be picked up and played for short bouts, trying out new custom plays, and feeling the thrill of throwing the ball to some wide receiver who’s trying to make a run for it based on your plays, and on that level, it succeeds. It could be argued that it aims low, prices itself accordingly, and scores a competent if not altogether awe-inspiring touchdown.

Speaking of touchdowns, the game has you play a mini-game after every touchdown, in which you repeatedly try to throw balls through as many rings as possible for a short period. This mini-game is moderately entertaining the first time around, but it’s repetitive, and by the third time you’re doing it, you can already feel the diminishing returns. It’s no change of pace when a game that has you throwing a football all the time, then has you throwing some more in a mini-game. Fortunately, this is optional, and can be skipped.

You can try to make a run for it as a quarterback rather than throwing the ball to a receiver, but the inclusion of that ability seems to have been a bit of an afterthought, and the game really isn’t built around it at all. Most attempts to do so will end in failure, and you’ll be lucky if you can gain any yards doing things that way. If you’re looking to exercise your leg muscles, you might want to stick to something like Pistol Whip.

2MD: VR Football Unleashed is fun if you keep your expectations relatively low. It relies on two main features; the throwing mechanics and the ability to create custom plays. The first is physically rewarding, and can legitimately exercise your arms. The second offers a certain amount of replayability for dedicated football fans who will revel in the opportunity to try out all kinds of crazy plays. Overall, 2MD: VR Football Unleashed is great for short bursts of play, but it’s hard to recommend unless you’re genuinely a fan of American football.