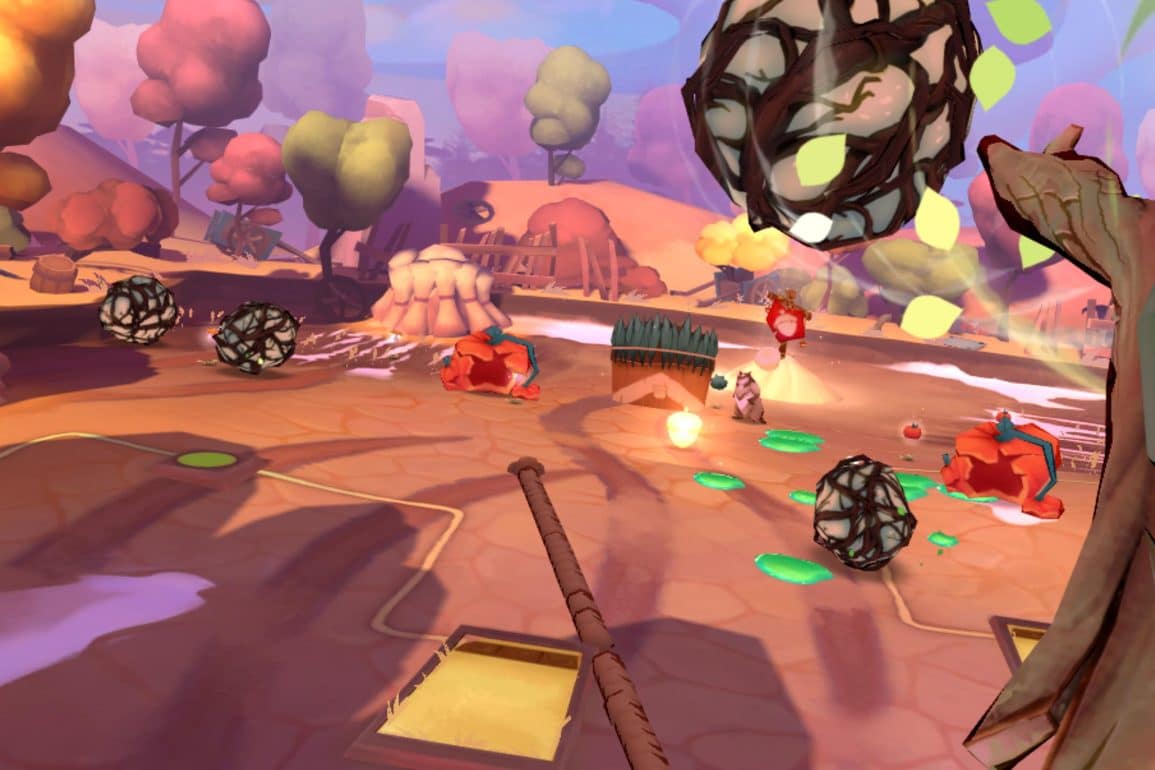 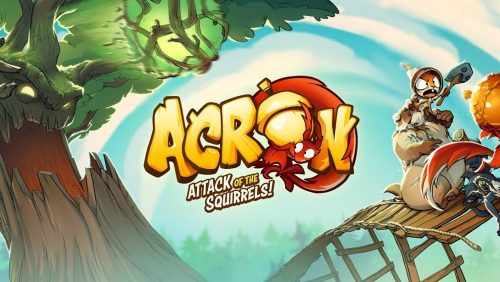 Virtual reality games aren’t generally great for local multiplayer. They can be lonely, isolated affairs that detach you from anybody in your local physical space. Sure, you can invite friends over for a Beat Saber evening and compete for high scores, but the game itself is a lonely affair. One player will slash at cubes while the others will, at most, watch a screencast on their mobiles or the TV while they wait for their turn. Of course, if you have more than one Quest, multiplayer gaming is a lot easier, you can play Racket Fury, Racket: NX, Sports Scramble, and any number of other multiplayer games. As long as you have enough space for two guardians, that is. Acron: Attack of the Squirrels offers an entirely different approach, allowing you to play a ‘one vs. many’ game using one Quest and between two to eight mobile devices.

Here’s how Acron works; the person with the Quest becomes a tree, and that tree guards four golden acorns that lie at its feet, er..trunk. The other players download an app on their mobile devices (Apple or Android) and take on the role of squirrels trying to steal the tree’s acorns. The rounds are short, lasting a few minutes and can get pretty frantic. Acron is served well by having more players on board, and I can really say that the more, the merrier.

As a tree, you have quite a few weapons at your disposal. First of all, you have your giant Groot-like hands, which can grab any squirrel that approaches you. I went full Kong on friends that I caught, bringing them close to my face and scrutinizing them carefully before flinging them off the level. They fell to their deaths, I laughed.

The tree also has three kinds of projectiles that are all limited by various cooldowns. The one you’ll use most of the time, and that replenishes almost immediately is a small ball of wood that you can use to lob at squirrels. The second is a boulder that can be made to detonate (don’t ask) when you throw something else at it. Finally, you can throw green slime bombs that spread ooze over an area. The ooze slows down any squirrels who try to run across it and can be used to substantial effect at chokepoints. As a tree, I found the best approach was to slow down the squirrels at chokepoints, lob a boulder near it, and then blow it up with a small ball of wood when the squirrels came by.

All Squirrels Are Equal, But Some Are More Equal Than Others

Acron: Attack of the Squirrels features a variety of squirrels. The squirrels come in four types, and each of these classes has different characteristics and a unique ability. The red squirrels are small and fast and can activate a sprint ability that makes them run even faster for a short burst. The marmots are a much easier target, being slower and much larger, but can employ a portable shield that’ll protect them from projectiles before it’s worn down. The ground squirrels are the smallest and can dig tunnels and travel underground, while the fourth type (perhaps they’re chipmunks, I’m no squirrel expert) can build ramps and bridges that are especially useful for levels with water or lava.

Leveling Out The Playing Field

At launch, the game comes with six different levels you can play on, these are all themed differently, but function more or less similarly. They’re mostly there to provide a variety of looks, but also have some factors (water, cliffs, etc.) that alter the game mechanics slightly.

Apart from the abilities that the squirrels posses, the levels themselves provide the would-be gatherers some support. You’ll find mushrooms on the ground, which, when activated, offer bouncing pads for the squirrels. The levels also have pumpkins that, when raised, function as barricades for the squirrels to hide behind as they make their way towards the golden acorns. In one level, you have to cross a stream on lilypads floating by, triggering a very brief memory of Frogger. In another, some lethal liquid keeps rising and falling. In that sense, the levels are fairly dynamic.

Acron’s developers, Resolution Games, seem intent on providing more content to the game as time goes on. They’ve directed fans to their Facebook Page to get updated when new content is launching. Judging by their involvement in Reddit, they also seem engaged with gamers and interested in developing the game further.

One thing that Resolution Games might want to look into is how to better balance the game. I felt that it was too easy for the tree to win unless it was playing against at least four other players. Maybe make the squirrels a little faster? Maybe make the boulder cooldowns take a little longer? Not sure.

Acron’s graphics are, as might be expected, cheerful and cartoony. They’re detailed and cute, and would probably be very appealing for younger gamers. It’s a style that’s particularly well-suited for the Quest. Not too taxing on the hardware, but attractive nonetheless. The levels are well designed but could use some more variety.

By Jessica Shanks
In Gear

As mentioned at the start, getting the game going isn’t a particularly complicated process. The tree’s on the Quest, and all other users just download a mobile app. The tree hosts a game and gets a region code (for the server) and a room code (for the game), these are generally a combination of two letters (for the region) and five digits (for the room). The mobile users launch the app, enter the region and room codes, and they join the game. Once at least two players have joined, the game can begin, and any missing players will be substituted with AI squirrels. This process worked perfectly for me whenever I tried to play the game, but this was not a universal experience.

Underneath the Fuzzy Exterior

Another reviewer encountered constant crashes on his mobile devices whenever he tried to play the game. This made the experience so miserable for him that he was unable to play the game, much less review it. The only real difference between our setups was down to mobile devices. I used newer iPhone models (two iPhone X’s), while he tried playing with an iPad Mini (2nd gen), an iPhone 5s, and an iPhone 6 Plus – all of which failed to provide a reliable experience. This gives us grounds to believe that despite the huge list of compatible phones on the iTunes store, the mobile app might not have been tested thoroughly on older iPhone models. We will update this section of the review if these issues get resolved, but until then, if you have older devices, we cannot guarantee that everything will work.

It should also be noted that whereas the developers emphasize local multiplayer, the players do not all have to be in the same room, or even on the same Wi-Fi network. Once players have the region code and the room code, they can join in from anywhere, but obviously, latency could then become a factor.

Furry Fun for All The Family

Compatibility warnings with older devices aside, Acron: Attack of the Squirrels is a lot of fun when played in groups, and it’s perfect for a shared party experience when you have some friends over. It’s also a game you can have a tremendous amount of fun playing with your family at home.