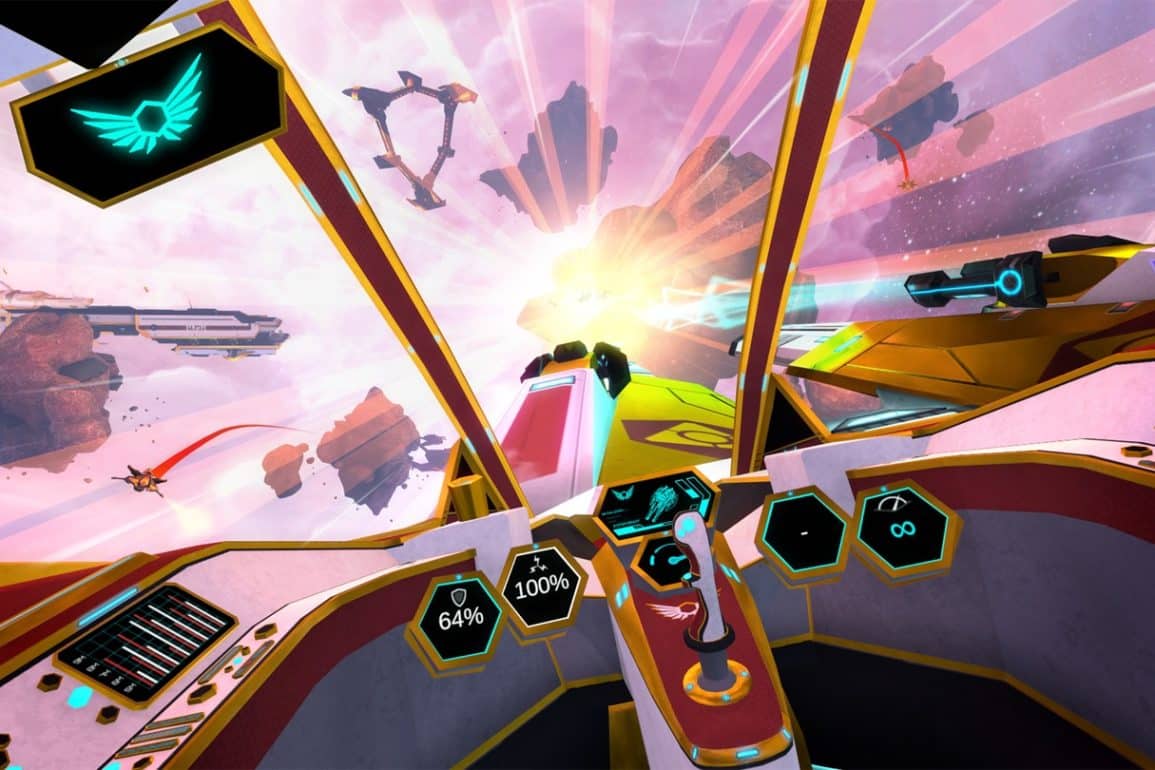 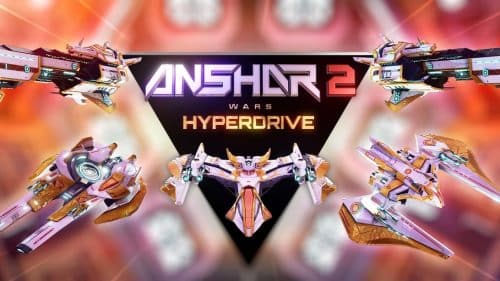 The evolution of the Anshar Wars series roughly parallels that of second-wave VR. The first game, Anshar Wars, was initially released on the Samsung Gear some 8 years ago. It received a sequel, creatively titled Anshar Wars 2, which also made its way to the Rift and the Go. We now have Anshar 2: Hyperdrive, which is essentially a port of Anshar Wars 2, albeit upgraded and optimised for Quest.

Having grown up loving games like StarStrike II on the ZX Spectrum and Star Voyager on the NES, I’ve sorely missed the genre. Therefore I was pretty excited to see if Anshar 2: Hyperdrive could rekindle my love affair with the space combat genre.

Everything in Anshar 2: Hyperdrive will, on the surface, be familiar to anyone who has played Anshar Wars 2. The story appears unchanged, and the visuals, while undoubtedly a little shinier in terms of texture resolution and lighting effects, are similar. You may be wondering what there is to get excited about in this ‘Hyperdrive’ edition of a 4-year-old game. The answer is simple: Anshar Wars 2 was a three-degrees-of-freedom experience, whereas Hyperdrive uses all six.

The difference this makes is revolutionary. Bringing current-gen 6DoF to Hyperdrive makes this the first time Anshar, an IP born and raised in the medium, has actually been a ‘proper’ VR experience.

The game begins with a potted history of the Anshar/Nergal war in which you, an unnamed pilot, are a new recruit. A brief tutorial level then introduces you to the fundamentals before it’s straight into the action.

The control options in Hyperdrive are vast. Each axis can be mapped to either stick or full accelerometer controls with either controller. Various degrees of snap-turning are available. Aiming for both your primary and secondary weapons can be similarly configured or linked to your head movement. Triggers for these weapons can also be assigned independently.

The individual elements may not sound much in isolation, but together they offer the ability to combine buttons, sticks, head tracking, and accelerometer controls in ways that will enable any player to find a set-up that suits them perfectly – and that’s before we’ve even gone into the choice of third or first-person view.

Which of these two perspectives you chose will be down to personal preference. The third-person view appears to be the more popular option, but I found the craft’s position on screen both distracting and awkward to manoeuvre when navigating insta-death asteroid fields. The first-person option offers a lot more immersion at the possible price of what is politely called ‘comfort’ and less politely called ‘vomiting on your shoes.’

Despite the science of ‘VR Discomfort’ being relatively well understood, my experience was somewhat less predictable. I once deposited my lunch into a bin while 10 pin bowling in Rec Room. Yet, somehow, skimming the hull of an enemy mothership, gunning down highly manoeuvrable fighters, spinning around to defend myself from artillery, and then pulling a loop back to finish off a turret whilst playing Hyperdrive inflicted upon me no ill effects whatsoever. You may not be so lucky, and that would be a shame because as good as the third-person mode is, playing this game in first-person using motion-controls as the flight stick is some of the best fun I’ve had in VR yet.

Fun, I think, is the perfect yardstick by which to measure Hyperdrive.

Star Wars Squadrons is clearly the big show in VR when it comes to Space Combat Simulators, and there’s little doubt that the EA & Lucasarts’ product has bigger, more realistic visuals and benefits from a vast fanbase and an equally vast budget. But OZWE, a Swiss developer consisting of 12 people and a dog called Basil, have produced a game that is simply more fun to play.

The visuals may render everything in a slightly chunky toy box style that threatens to expose the series origins in mobile VR, but the levels bring creativity and a consistent style that can’t be ignored. Even with the ostensibly low polygon count on offer, these developers often pull together scenes and vistas that are much more than the sum of their parts, and the multiple spacecraft you have to control throughout the game are unique and very well designed. Especially in first-person, the interstellar dogfights and large scale battles are vividly brought into (virtual) reality in a way that I could only imagine as a child.

Audio too is delivered with no small amount of class.

Music is as bombastic as it needs to be given the dramatic context, and the spatial audio used for the sound effects is a real treat. It serves as a great assist in the heat of battle and plays no small part in the immersion of the first-person mode.

Urgent, in-game radio chatter is supplemented by further exposition between levels. While the comic book style is simple, and quite a few phrases are repeated, it serves its purpose well. The voice acting is exactly the kind of slightly melodramatic nonsense I want in a game about gunning down alien baddies from inside my brightly coloured space jet.

All this fun makes it difficult to be objective about the game’s flaws because it feels a bit like kicking an excitable puppy. Still, you will encounter a few issues that impact the experience.

The biggest of these is the game’s inconsistent checkpoint system. Sometimes there are plentiful waypoints in a mission, and other times there are none at all. As early as the third mission, you’re tasked with taking down an enormous enemy command ship. This task is quite clearly delineated into 4 sections – and yet offers not a single checkpoint.

When you’ve figured out how to beat them, most of the game’s missions are fairly short and can be beaten in around 5 minutes. But it’s very rare to achieve this on the first try. Usually, it’ll take quite a few attempts to work out the correct approach to a level.

Another issue is that there are occasions when progression objectives aren’t entirely clear. You quickly learn to pay close attention to the instructions imparted over the radio. The instructions aren’t usually repeated, and there isn’t a log to refer to if you miss something.

The single-player story mode is divided into thirteen levels. There’s no escaping that this alone doesn’t offer space opera longevity, but each mission has an optional time goal and sub-objective that, together, provide a good amount of replayability. A lot of the missions you’ll want to enjoy again anyway, so having these extra targets to aim for while you do is very welcome. I think that a short game you’ll play many times is better than a long one you’ll play once, and Anshar 2: Hyperdrive falls very much into the former category.

There are also three multiplayer modes to explore. Somewhat predictably for a less than high profile game on the Quest, each of the Battle Royale, Death Match and Co-op modes are pretty sparsely populated. Matchmaking is either non-existent or rendered useless by the low player counts on the servers. When I have found games to join, it’s been a fun time, and the atmosphere has been notably good-humoured.

There’s a small dedicated community attached to Anshar Wars that is very welcoming but, through no fault of their own, its members are very good at the game. This can prove intimidating for newcomers in the competitive modes. Death Match plays out as you would imagine, as does the Battle Royale mode. Still, the issue of low player numbers (at least in my experience) is a bigger problem here than elsewhere.

Co-op is currently a single one-off mission where those highly skilled players are very welcome, but as much as the addition of some new features such as special icons to collect and explosive enemy defence tactics are great in theory, they’re never really explained and in some cases their effect isn’t apparent. New maps and other updates are planned for all multiplayer modes, but I think uptake will need to increase by a fair amount if they are ever to see the light of day.

My god, it’s full of stars!

There’s no hiding from the fact that Anshar 2: Hyperdrive is definitely not a mega-budget Space Combat game pushing the limits of VR. However, it’s ridiculous to judge things based on what they’re not instead of what they are – and what this game is, is terrific fun.

Each potential technical negative is mitigated through personality and character: The graphics are simple, but the art direction is elegant. The story is mired in tropes, but the delivery is endearing. The number of levels is small, but they offer enormous variety. The duration of the missions may be short, but the urge to replay them is strong and well rewarded.

Because of the sparsely populated multiplayer servers, I would broach caution if random multiplayer is a priority for you, but the single-player campaign alone is worth every penny of the fifteen quid asking price.

Anshar 2: Hyperdrive
TLDR : Summary
Its Gear VR heritage may peek through the new coat of paint every now and then, but Anshar 2: Hyperdrive brings space combat to the Quest with style, energy, and a whole heap of fun.
Concept
8
Gameplay
8
Graphics
7
Audio
7
Longevity
7
Pros
Large variety of mission types
Hugely immersive 1st person mode
Massively customisable controls
Cons
Not exactly a technical powerhouse
Inconsistent checkpointing
Barren multiplayer
May be uncomfortable for some
7.5
Fun-Tastic
Get it on the Oculus Store
Anshar 2: Hyperdrive