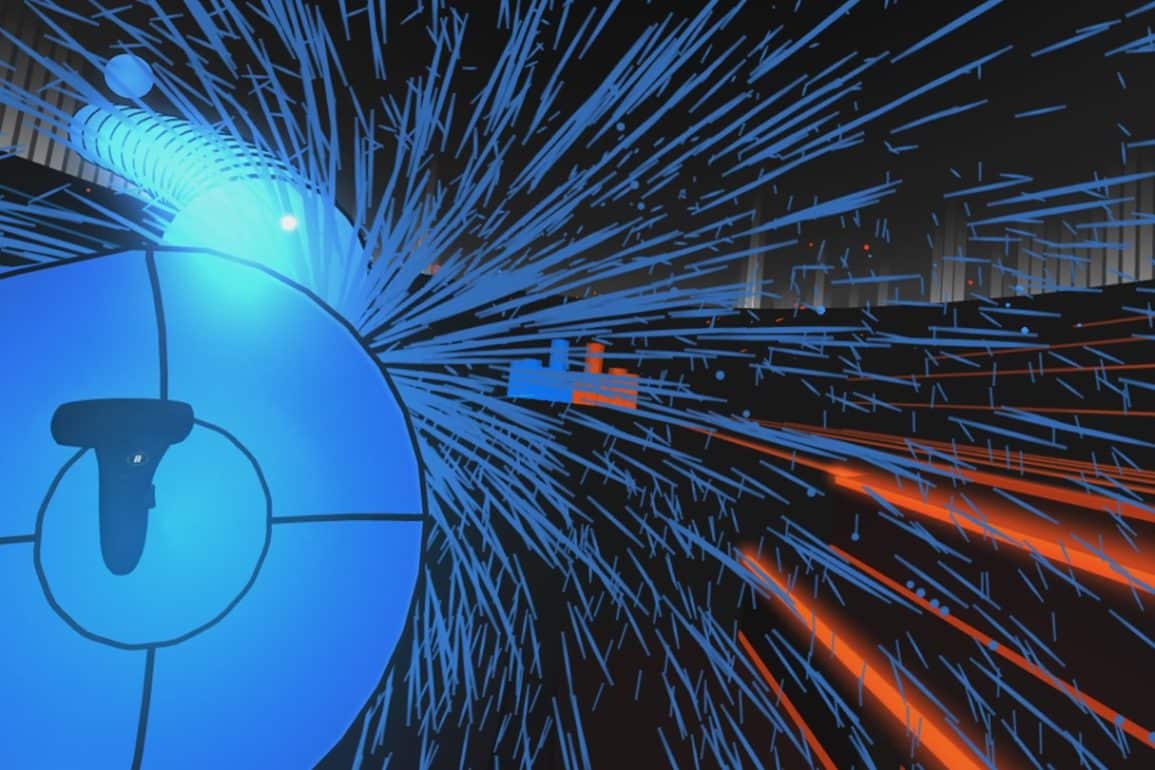 A Rhythm Game That Lets You Use Your Own Music 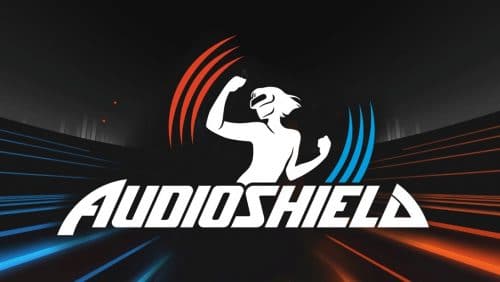 Today we will take a closer look at one of the original gangsters of fitness experiences. This game came out as one of the first-ever rhythm games back when PCVR was mostly suitable for techies and users needed a different approach to blowing off some steam. Of course, I am talking about AudioShield – first released in 2016 with the premise of “block the beats” and now finally available as a port for the Oculus Quest.

These Shields Are Made for Rockin’

As a rhythm game, AudioShield combines dance-like exercise with music and provides various tasks that you can complete for points. You’re equipped with a shield per controller and can combine the shields into one purple shield by holding them tightly together. During the game, colored orbs fly towards you, their colors indicating which of your shields should be used for blocking or punching them. How you handle the orbs will affect your overall score in the leaderboards. AudioShield also promises to get you going even further by using your very own music library to work out to all your favorite tracks.

The first thing I noticed in the game lobby was that there were no options at all! AudioShield is designed for you to jump right into! No setup, no polish, no fuzz at all. You start with twenty preloaded songs and are presented with an exciting opportunity to choose any other song! That includes using any of your own music, as long as it’s in mp3 format. There is no tutorial, and you don’t really need one. AudioShield is very simple to get into. The lobby acts as one big music menu, everything else is sorted out later and per song.

The Mother of All Song Libraries!

Using your own music is very intuitive once you take the time to read the short and simple instructions for adding music to the game. You can browse through different sources on your Quest to choose songs stored in the built-in memory, or you can use the Quest’s browser to download songs you have stored in your cloud. AudioShield supports Google Drive, Dropbox, or direct downloads from within the browser. I tried downloading pre-uploaded music from Google Drive, and that went by without a hitch. It’s all very convenient: I connected the Quest to my Windows PC and transferred several mp3 files into the music folder. AudioShield will recognize any mp3 file automatically once it’s stored on the Quest and display them in whichever order you choose. If your mp3s come with album thumbnails, these will be displayed in the lobby as well. I have about 300 songs in my music folder, so I wanted to use the game lobby to search for specific songs. Unfortunately, I couldn’t get the search bar to work properly. So I ended up having to browse through my music library. As my mp3 collection is maintained relatively well, that wasn’t a big problem, though – I just browsed by album titles or thumbnails.

Number 5 is Alive.. and It Automaps Your Songs!

Once you choose a song, AudioShield will present you with some options. Finally, some settings to fiddle around with! You get to choose from four different arena-like stages and several difficulty levels; Normal, Hard, and Expert. There are also two Fitness options named ‘Fitness’ and ‘Fitness Plus,’ which add some variety to the gameplay. Then there is the ‘Casual’ option. To be honest, I don’t know what that does. I mostly played on Normal, Hard, and Fitness. If you find out what ‘Casual’ does, please let me know in the comments!

When AudioShield loads up your song, something magical happens. It doesn’t matter if it’s one of the preloaded songs or one of your own – the song will get automapped right then and there. This takes a moment, and right after that process, you are presented with the stage. Every stage displays a starting plate for you to put your feet on and an introduction to general gameplay. You will always have time to get familiar with your surroundings before you start your song.

Orbs Are Better Than Orcs!

Once you confirm to start the song, you will get a good look at your arena, and – let’s face it – these are minimal, but beautifully made. You can choose from four different backgrounds; Stage Dive, Manifold, Horizon, or The Void. I hope additional arenas come with future updates, but four stages are enough for a start. Every arena has little gizmos for you to discover, and while I won’t spoil the surprise for you, I will tell you why I liked the Manifold stage best. Manifold displays an equalizer that is used to automap the songs to an orb track.

The orbs themselves are animated well and are satisfying to look at, especially because they explode on contact. With every orb or orb trail you block with one of your shields, you get haptic feedback from the controllers. The higher the difficulty, the more orbs appear, and the trickier the orb patterns get. Missed orbs are indicated by red and blue flashes on the side of your field of view, and you always have a wide view of the next pattern that’s waiting for you after the one you’re clearing. The orbs always rain down on you with a slight downward angle, and you might want to check the horizon frequently to prepare for the next waves. The Fitness modes provide glowing triangles for you to duck under, thereby introducing squats to the gameplay. If you get into AudioShield, you’ll get sweaty pretty soon!

Are You Ready To Be a World Leader in “Artistic Expression”?

As AudioShield allows you to use your very own music, the leaderboards will be set up individually for every song. Your score will depend on a few things, and the system used to calculate the overall score is pretty smart. The total score is cumulative and includes both technical and “artistic” components. Depending on your continuity and rhythm, you can score higher in the technical section because that’s where consecutive hits, misses, and hit percentages are counted. The artistic expression is measured by the intensity of both your movement and your punch power. If you take this seriously as a workout, you will obviously get into the rhythm and more or less dance on your own while using the shields more as boxing gloves then shields to just block the orbs. This will earn you a higher score in terms of activity and punch power. If you are looking for near-perfect runs, you may want to keep your controllers closer to you, touching (as opposed to punching!) more orbs. This will give you a good chance of getting closer to a high hit percentage.

Leaderboards are worldwide, so chances are, someone else is playing the same song you are, and you won’t stay on top of that song’s leaderboard for long. To get a real feel for your skill level and how you can improve, I suggest you start with the bundled tracks.

So.. is AudioShield the best fitness experience or the best rhythm game on the Quest? It isn’t, but…

AudioShield does a lot of things right. It’s not just another clone of Beat Saber (actually, it’s older than Beat Saber!), and it stays true to its simple concept. The most prominent feature of AudioShield is the automapping of your own music, though, and that’s where it has some difficulties. To understand these, you have to take a look at the automapping process itself. AudioShield automaps the orb patterns to your songs by measuring EQ peaks, beats per minute, and dominant basslines. That’s where the orbs come from, and that’s how the patterns take shape. Varying the difficulty in a song results in changing the number of orbs and their flying patterns while maintaining the base patterns built on the beat and bass lines.

I wanted longer songs to workout to in a more constant flow. Instead of simply merging some of my favorite tracks or using DJ mixes and importing one big mp3 file, I tried using orchestral arrangements. If the music you’re trying to auto-map isn’t very rich in beats and bass, that’ll result in you just punching away at seemingly randomly placed orbs. I experienced this with the orchestral music that I tried.

On other tracks, sometimes the beat and bass simply weren’t registering high enough on the equalizer to generate matching orb patterns.

These are points to know and act on if you are excited about the premise of using your own music. Choose the right style and songs to generate cool orb tracks to work out to – otherwise, you will be disappointed!

Other rhythm games like OhShape and most of the games Lori Knox recently highlighted in her VR Fitness feature, use hand-mapped songs only. There are whole communities for those games that support the thirst for custom levels, but you have to find those levels on the internet or buy them as audio packs. Another option is modding your original game to be able to sideload custom songs, but Oculus might not be too happy about that and have waved around the possibility that they’d ban headsets.

AudioShield frees you of need to sideload or mod your game enjoy custom levels despite its automapping flaws.

This is definitely a big plus.

The performance of AudioShield is excellent. It runs smoothly, and I experienced no hiccups whatsoever. The controllers’ tracking was always on point, and the haptic feedback provides you with just enough information to know if you hit or missed the orbs. I can see myself getting back to AudioShield quite frequently, given the ability to workout to all my favorite songs. The concept works and supports an active gaming style. If you decide to be more stationary, you might get bored of it rather quickly. Rhythm games tend to get repetitive after a while, even if the patterns of objects or blocks are varied frequently. Right now, AudioShield has no support for fitness trackers of any kind. Still, the tracker I use came in on 500 calories burned in an hour, on average. That’s the caloric equivalent of a quarterpounder cheeseburger without bacon (or a side of fries!). Not too bad for a workout.

I had a lot of fun with AudioShield because of its versatility, ease of use, and the ability to use my own music library. I can see myself coming back and using it frequently for custom workouts. Almost every other game forces you to either jump through modding hoops or pay for audio packs to grow your music library. At the current price of $20, AudioShield gives you a lot of music variety. Despite some issues with automapping and the inability to use YouTube as a music/video source (which you can do on the PCVR version), I give AudioShield a double thumbs up!

AudioShield
TLDR : Summary
AudioShield enables you to experience your preferred songs in a whole new way. Despite minor flaws with the automapping, you will get loads of possibilities to workout or just have some casual fun smashing orbs to music.
Concept
6
Gameplay
8
Graphics
7
Audio
10
Longevity
8
User Rating0 Votes
0
Pros
You can use your own music!
Gameplay is very fluent and mostly satisfying
Fitness mode adds squats to your workout
Cons
Automapping is sometimes inaccurate
Shields are not customizable
8
Pumping!
Get it on the Oculus Store
AudioShield