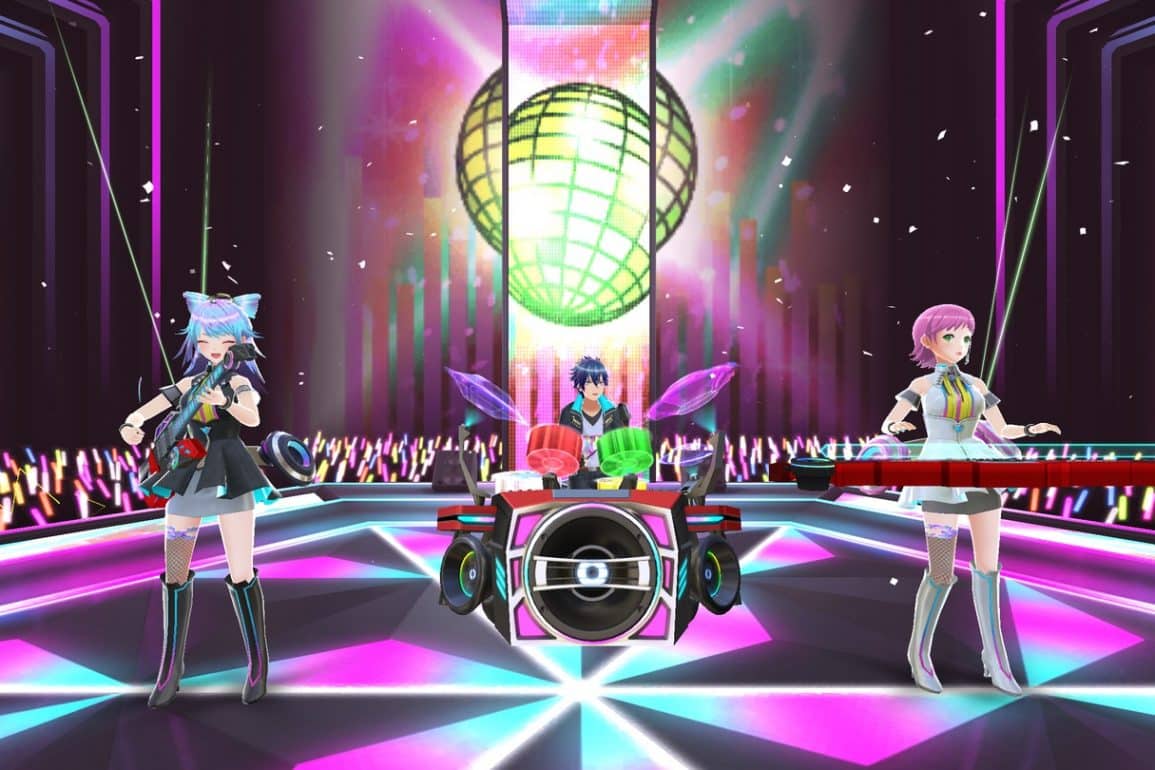 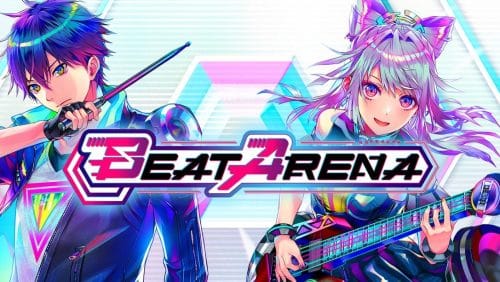 You’d be forgiven for assuming that Beat Arena, recently released onto the Quest storefront with zero fanfare, is a cynical cash-grab by a pantomime villain, Konami, to get their hands on some of that sweet, sweet Beat Saber coin.

I think it’s important to clarify from the start that this doesn’t actually appear to be the case. Instead, Beat Arena seems to be channelling ‘Rock Band‘ by offering four different instruments to play, promising that it will make you “feel like a rockstar”.

Imagine how great it would be to don your Quest headset and meet up with your friends for a virtual concert as the VRctic Monkeys or the Preten-W.A.? Well, Konami imagined this too! Then, they made this pitiful excuse for a band simulator instead.

If I weren’t heavily sedated

It doesn’t take very long for Beat Arena to inflict its awful design upon the player. Its menus and screens are cumbersome and user-unfriendly. As if navigating these labyrinthine interfaces wasn’t confusing enough, the game insists you hold all buttons for a couple of seconds to activate them with your virtual hand. A virtual hand, I might add, that initially looks like it belongs to a six-year-old girl.

Eventually, finding your way to the tutorial, you can finally get on stage to play some music. As stated above, there are four instruments available. Taking each instrument in turn, I started where most people would; the Lead Guitar.

For guitar, you use the buttons on the controller in your non-dominant hand to select one of three notes or combine them into a chord. Strumming uses motion-sensing controls on the other controller. It is so frustratingly inconsistent that it gave me Wii-TSD: recurring flashbacks of the crow-barred waggle-controls that tainted Nintendo’s 7th generation console.

Playing the Bass Guitar is less frustrating, as the strumming here is replaced by the trigger and grip buttons. Not only does this remove the nightmarish motion controls, but it is actually an excellent approximation of how one might pluck at the strings of the instrument in real life. On the downside, the bass is both the least sexy instrument in the world and the most boring instrument to play in this already tedious game.

At first, the Keyboard feels like it could be entertaining, and it’s probably the best sound match for most of the music on offer. The keys are divided into broad groups slapped in time to the beats that fly towards you. The speed initially appears to offer a welcome challenge, but with only a handful of ‘notes’ and no further nuance, the instrument quickly reveals itself as far too basic to be fun for long.

Finally, we come to the drums and the only instrument that is consistently any fun to perform on. You’re given a complete 8-piece kit, with each drum or cymbal being a different colour and shape. These are matched by the notes rolling towards you, which must be struck when they overlay their respective drums. Unfortunately, the problems begin again when things get hectic on the more difficult (and potentially more enjoyable tracks). Lower drums are positioned in a place that is far too easy to accidentally hit, and you might not even realise that you’re doing so, thanks to the poorly implemented haptics that fail to convey strikes or misses accurately.

Finally, as you wrestle with all these barriers to enjoyment, you also have your bandmates to consider. In single-player, you are joined on stage for each performance by two AI companions who play the other instruments required for the song. As you play, you are supposed to build a rapport with them through emojis selected via the thumbsticks or turning towards them when they teleport (yes, teleport) closer to you. As with everything else in Beat Arena, there is so little feedback to your actions, whether positive or negative, that the whole exercise is more of an annoyance than a fun diversion.

A Preserved Moose on Stage

When it comes to Beat Arena’s graphics, I suspect that, as a middle-aged Englishman, I’m not the target audience for the intensely JRPG avatars featured in the game. The neon pinks and blues that make up the majority of the game’s palette are striking, but the design of the stages, characters, and backgrounds are on a par with a five-year-old mobile phone game.

Interestingly, Beat Arena includes music from Konami’s library of classic arcade games. Knowing this, I was excited to see how they had arranged the soundtracks for titles like Gradius, Lifeforce, or Scramble for this gameplay format. Sadly, Konami’s idea of what constitutes their Classic Arcade Games is very different to my own. Instead of Salamander, Thundercross, and TwinBee, they delivered ‘BeatMania’, ‘BeatMania Complete Mix’, and ‘BeatMania 7thMix – Keepin’ Evolution’.

And no, I didn’t make that last one up.

As for the music itself, I’ll give the performances the benefit of the doubt, as more than the usual amount of subjectivity applies to rhythm and dance. Regardless of taste, however, the mechanics, overlays, and interactions the songs are tied to often don’t make sense. You particularly feel it while wading through the tutorial and early levels when there’s not enough going on to distract you from their failings.

Are the avatar designs a matter of taste too? They’re lazy, unoriginal, expressionless, and dull. Regardless of origin, the designs embody an aesthetic seemingly chosen to reinforce a stereotype held by a sub-sector of the western audience.

As for game structure, there’s a campaign consisting of up to fifty performances. A branching campaign design allows you to work your way through while mostly avoiding your least favourite instrument.

In case you missed what I just said – I’m saying that the best thing about Beat Arena is that it allows you to skip an entire quarter of its content. Assuming you haven’t committed to writing a review of this game but somehow muster the enthusiasm to finish it, you will have wasted around three hours of your life.

In lieu of actually delivering a virtual reality band experience that could have been a saving grace for Beat Arena, Konami brings what it’s calling an ‘asynchronous solution’. What this means is that you get to strum your poorly-mapped guitar along to songs you don’t know in the presence of ugly, woefully animated avatars. You do so by selecting a recording of their performance from a horribly designed menu.

The mind-boggling thing is, as hugely unsatisfying as the experience of ‘asynchronous multiplayer’ is, there are, in fact, quite a lot of people playing this game. I have no idea why anyone would do this to themselves, but I’m tempted to assume that Konami have recruited an army of BeatMania fanatics to populate its virtual spaces with near-identical avatars delivering barely competent performances.

It’s not often I find myself without anything good to say about a game at all, but I’m really struggling when it comes to Beat Arena. Rhythm games have been around nearly a quarter of a century. They include some of the best games ever made. So when a company with the financial resources and sector experience of Konami releases one as objectionably bad as Beat Arena, there really is no excuse. At $30, Beat Arena is an abysmally low-end game selling at an ambitiously high-end price.

Beat Arena
TLDR : Summary
Beat Arena is a terrible experience, perhaps even challenging Wii Music for the title of the worst game ever produced in this genre. It offers a selection of songs that only a handful of people will enjoy. Fewer still will enjoy trying to play along to those songs using the game's poorly designed instruments.
Concept
2
Gameplay
1
Graphics
2
Audio
3
Longevity
2
User Rating0 Votes
0
Pros
Cons
2.5
Cacophonous
Get it on the Oculus Store
Beat Arena