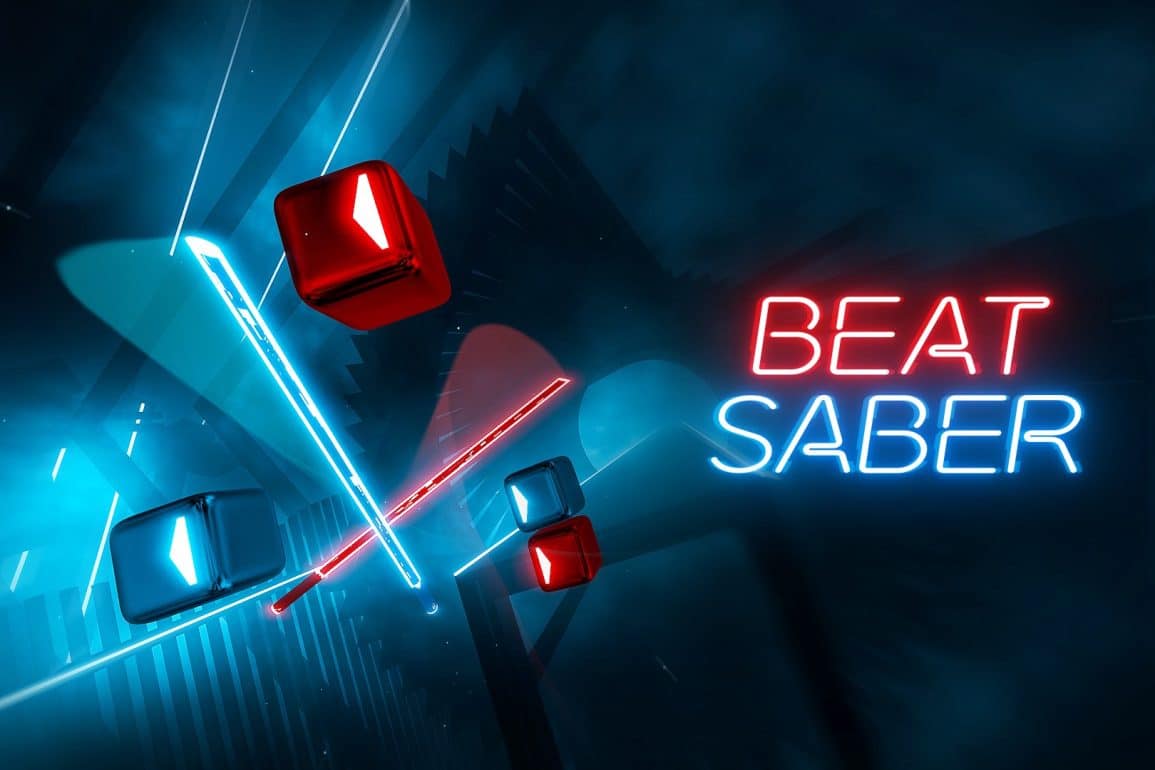 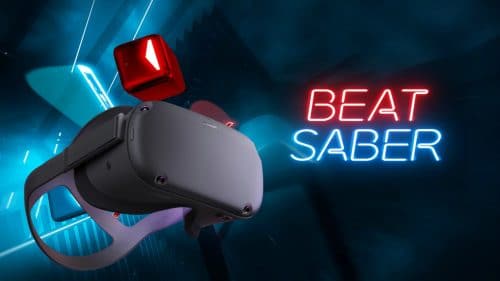 It’s possible, although not at all likely, that you haven’t heard of, or played, Beat Saber. If you haven’t, keep reading. If you have, skip the following two paragraphs to see what it’s like on the Quest.

Beat Saber is a music/rhythm slashing game that’s played in VR. It first came out on PC, where it quickly earned a huge following, making it one of the first VR games to deserve to be called a ‘hit’, and it did all that while still in ‘early release’ – meaning that it wasn’t – as far as its developers Beat Games, ‘feature complete’.

Beat Saber places you in a virtual space that shares aesthetics with Tron. It relies on simple geometrical graphics, all suffused with a neon-glow, and turns your controllers into a pair of lightsabers, only nobody calls them that because..lawyers. Music starts playing, and colored cubes come rushing at you, timed to meet you on the beat. So you do what any musical Jedi-Ninja would do in such a situation, and you slash, ever so joyfully, at the cubes, splitting them in two as they rush past you. That’s really the core of the game, and at its best, it’s absolute bouncy-ninja-hopping bliss.

The game suffers a slight graphical downgrade on the Quest if you compare it to it’s earlier versions, but the graphics are simple enough that nobody but die-hard graphical junkies would care. Compared to the PSVR version that I’m most familiar with, the game loses some graphical flourish, but the Quest’s display quality just looks better. So it’s less graphically intense but somehow cleaner.

What you gain, however, is invaluable, a full tangle-free, untethered, wireless experience which not only enhances the experience but has led the developers to start developing full-on 360 degree levels that will have you chopping blocks not just in front of you, but all around you.

On the Quest, you get superior tracking to PSVR and a completely portable self-contained Beat Saber system that you can carry with you anywhere you choose. Something that you’ll find yourself very tempted to do.

Beat Saber has gained praise not only for being a hell of a lot of fun but also for being a hell of a workout. The Virtual Reality Institute of Health and Exercise (it’s a real thing!) has determined that the physical exertion of playing Beat Saber is on the same level as that of playing Tennis, and essentially, if you’re playing it with any sort of gusto, you’ll find yourself burning around 500 to 600 calories an hour. I’ve tested this myself using a Fitbit and can absolutely vouch for these figures. My Fitbit recognizes my Beat Saber sessions as ‘aerobic exercise’ and, on average, I burn just as many calories as indicated by the VRIHEI!

Now if you’re a PC-Gamer who’s played Beat Saber, you know that, other than the original music tracks included with the game, you can use a few very popular workarounds to install custom levels, opening up the game to (literally) thousands of user-generated maps for all kinds of popular songs. The original tracks, mostly composed by Jaroslav Beck are, generally, excellent and perfectly suited to the game, even if they might not belong to your favorite genre of music, but whether you like them or not, the appeal of playing Beat Saber to some of your favorite tracks is undeniable. This is a ‘feature’ that I painfully missed as a PSVR player, but that the Quest gloriously enables.

If you want to learn how to find and play custom levels on Quest, read our SideQuest guide!

So what’s there to say? Beat Saber has easily proven to be one of the first ‘killer’ games on VR, and Oculus knew what they were doing when they made it one of the launch titles, and it’s no surprise that when I bought my Quest, I found that it came with a demo of the game pre-installed. As a fan, I didn’t need any convincing at all, since it was literally the first purchase I made after powering up the system.

Beat Saber is one of the most popular games on VR, and I am absolutely certain that it sold quite a few Quests. In case you haven’t gotten the hint yet, this is absolutely a must-have Quest purchase and one that will give you countless hours of cube-slashing fun!

Beat Saber
TLDR : Summary
Beat Saber is one of the most popular games on VR, and I am absolutely certain that it sold quite a few Quests. In case you haven’t gotten the hint yet, this is absolutely a must-have Quest purchase and one that will give you countless hours of cube-slashing fun!
User Rating6 Votes
7.3
Pros
It's Beat Saber, Untethered!
Delicious Rhythm-Slashing Fun!
Cons
Slight Graphical Downgrade
9.5
Must-Have
Get it on the Oculus Store
Beat Saber