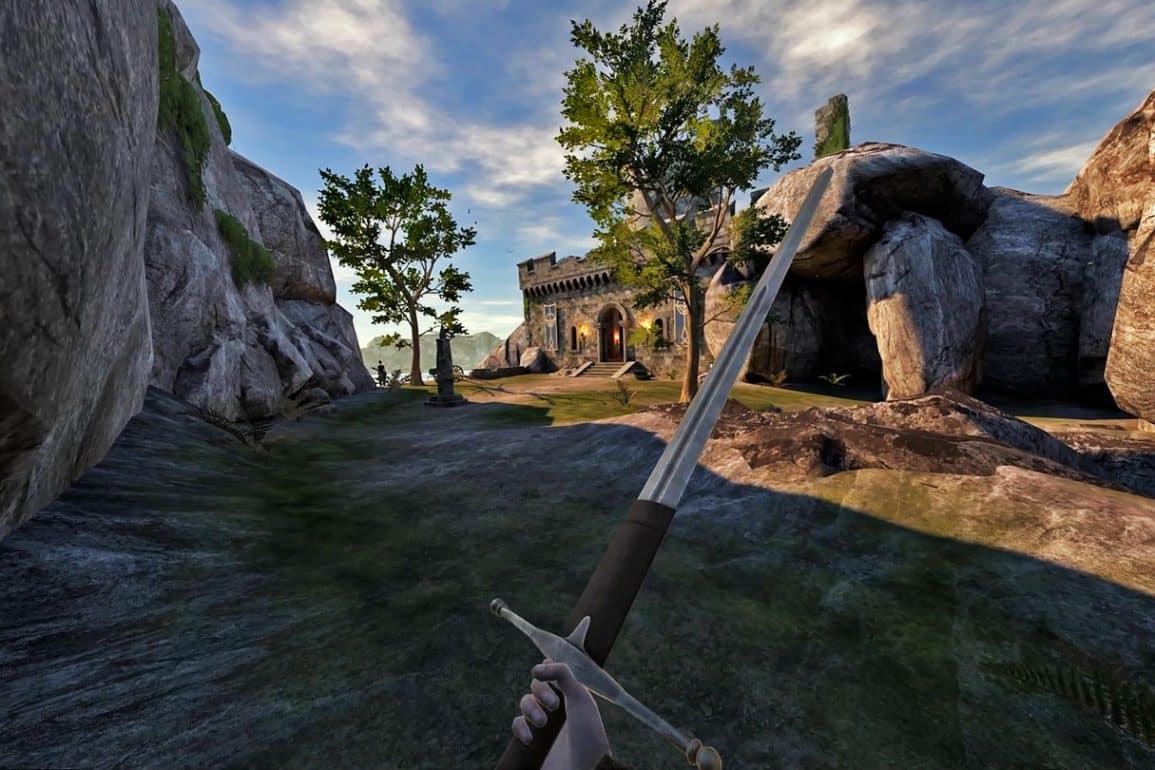 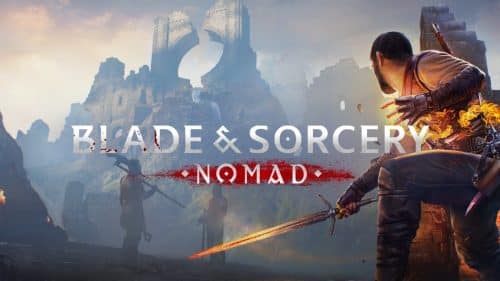 The original PCVR iteration of Blade & Sorcery exists within the Quest community as somewhat of a unicorn. Revered by many as the pinnacle of combat based VR gaming, the question “Will Blade & Sorcery come to Quest?” must’ve been asked approximately four minutes after the Quest was first announced. And for the longest time, the answer from those in the know was a resounding, and somewhat frustrated, “No”.

That was the case, of course, until last week. The recent Oculus/Facebook/Meta Connect event saw a disappointing dearth of big game announcements. Still, one particular highlight was the reveal that everyone’s favourite stabby unicorn is coming exclusively to Quest 2 in the form of Blade & Sorcery: Nomad.

Much as Old Ben Kenobi felt a disturbance in the force at Alderaan’s destruction, many of us now feel as if millions of NPC cried out in terror and were suddenly silenced. In the announcement’s wake came the gentle hum of a thousand pre-teen pseudo-murderers, throbbing in angst-ridden anticipation. All I can say is, thank god, this one isn’t multiplayer.

Blade & Sorcery: Nomad is ostensibly described as a physics-driven, medieval-inspired combat sim where the gameplay is limited only by the players’ creativity. It could also, and perhaps more accurately, be described as a straight-up murder simulator, offering a level of ragdoll physics and realistic stabbery as yet unparalleled on the platform.

The game offers four arena maps. The player can curate the waves of partially clothed combatants they wish to face and dive headlong into combat with relative swiftness. There, unburdened of the trappings of narrative and progression, players are free to howl shamelessly into the void and become untouchable fantasy warriors of Tolkein-esque proportions. Well, that or become the sadistic stuff of NPC nightmares, but let’s give the benefit of the doubt and go with the first one for now, shall we?

While it does include a limited dungeon crawl, the real draw for Blade & Sorcery: Nomad is the physics-based swordplay. The dungeon crawl, or “Greenland” map was definitely my preferred way to play, but make no mistake that it could in no way be mistaken for a campaign. Nor could it be interpreted as a roguelike, and it is most definitely not an RPG. What Greenland actually offers is a series of semi-procedurally generated rooms (read: about 15-20 rooms, shuffled slightly per run) which allow you a bit of breathing space between fights. Essentially, the core loop moves from “Hack, Stab, Die, Repeat” to the much improved and altogether different “Hack, Stab, Stroll, Die, Repeat”. Awesome.

“Greenland” has no boss fights, no unlockables, and offers no real reason to view this as an alternate game mode. It is inherently just a more extended map for the original sandbox mode to play out over. But that sandbox, quite frankly, is what we’re here to talk about…

TIS BUT A SCRATCH

Upon entering the world of Blade & Sorcery: Nomad, it becomes quickly apparent what you’re there for. Not because the tutorial focuses on the combat (mainly because there isn’t one), but because there is borderline nothing else to do. The player starts in a hub area where you can twaddle around with different weapons and such, but within a matter of minutes, you will realise that you are essentially only there, so you can pick your map and get stuck straight into the action.

It is entirely worth noting at this point that, of its ilk, Blade & Sorcery: Nomad offers the most advanced physics-based melee combat system currently available on Quest. The system running the physics interactions is incredibly impressive, even more so when you consider that this iteration is running through a glorified mobile phone. It is significantly better than the likes of Gladius or Gorn. As such, there is doubtless a particular, masochistic fun to be found within these hallowed arenas.

Disappointingly, the lack of depth displayed by the enemy combatants is a real issue. Regardless of what weapon they have, they always seem to fall into the same 3 or 4 predictable attacking animations, which erodes the intensity of the combat far too quickly. After a while, they all just became scantily clad reskins of the same one-note jump attack. When my attention did begin to wane, this issue was the main culprit.

That said, there are a decent variety of weapons that can be combined to forge unique playstyles that cater to almost any penchant for violence. I have absolutely no shame in admitting to taking immense satisfaction at one or two particularly well-timed blows that saw head or limb fall limply to the floor.

The combat can be intense and gritty. For those who become proficient and can make death fall like rain, there is an almost dancelike rhythm that will surely be intoxicating. There is also the unfettered opportunity to just wallow gracelessly in violence if that’s your particular oeuvre. The reality is that if that sounds like your kind of thing, then you are probably going to have some fun here. Just be warned that there is VERY little else on offer.

WHAT’RE YOU GOING TO DO, BLEED ON ME?

Given the title, you may well be asking, “Dammit Pete, where is the bloody sorcery?!?!” and that is indeed a fair question.

On paper, Blade and Sorcery: Nomad reads like the perfect combat sim. Offering ranged weapons in the form of bows and a variety of spell types, all of which can be combined with a highly advanced physics combat system, the gameplay should, in theory, feel deep, fresh, and practically limitless. The only problem is that it just doesn’t.

The magic components of the combat allow the player to switch between three spell types; Gravity, Fire and Lightning. Each type is selected from the power wheel and then activated with a simple button press or a basic gesture. Weapons can be imbued with these powers, which is the coolest part of using magic. Other than that, the magic didn’t feel anywhere near as well developed as the melee combat. Compared to the gesture-based spellcasting of The Wizards: Dark Times, the magic on offer here just feels like a sad, 2-dimensional interpretation of the genre. Don’t get me wrong, there are still cool moments to be had; it just falls so far short of the competition that it seems out of place against the proficiency of the melee combat.

The archery, sadly, is even worse. As a VR archery aficionado, I’ve played almost every iteration of archery mechanics available on Quest, and this is by a long margin the worst that I’ve seen. From aim to velocity, there is nothing within the system used here that is satisfying. Despite starting every run with the bow, I eventually became frustrated and dropped it in favour of another short sword. Shortly after, I actually jumped into a quick game of In Death just to make sure my expectations weren’t unreasonable. They weren’t.

What that leaves you with is a game that should more aptly be called Blades & Other Blades (or BladesSquared – thanks, Omar), as those are definitely where the game shines.

BUT YOUR ARM’S OFF?

There is no better acknowledgement of how taxing the physics system in Blades & Sorcery: Nomad is than the graphics. From start to finish, the processing power funnelled into the physics walks itself across the screen as obviously as the textures that render your virtual existence.

I have a reasonable amount of experience with the PCVR version of the game, albeit playing on a rig made entirely of antiquated parts and held together by voodoo engineering and mashed potatoes. So for me, the graphical fidelity of the Quest 2 port actually rang pretty close to home and wasn’t too jarring. Others, however, may well have very different reactions.

In attempting to create a realistic combat experience Warp Frog have tried to stay with an inherently realistic visual style. As a result, Blade & Sorcery: Nomad feels more like stepping into a Playstation 2 game than anything else I’ve reviewed to date. Some areas look quite good, usually in relatively open spaces where the textures feel distant and deliberately… rustic. But the darker, dungeon sections showcase the limits of the textures available as the processors seem to groan under the weight of the physics systems. I had multiple issues where frames would drop and a few crashes as well.

That said, it’s not terrible. In the context of everything else that is going on, it is admirable that the development team did not fold on their identity and were able to deliver as much as they have.

From an auditory perspective, sadly, everything other than the sound of metal ringing on metal feels like somewhat of an afterthought. There is minimal music on offer, so all ambience is drawn from the sounds of combat itself. While this is most likely a deliberate attempt to once again channel focus towards the visceral sensations of the combat, it can at times leave the experience feeling empty and unfinished.

The actual sound effects that echo throughout the action are all perfectly serviceable, but the NPC combatants lack anything that could be confused with character. Without a little sonic flair to keep things fresh, the road towards the endless slaying starting to feel repetitive is shorter than it should have been.

COME BACK, I’LL BITE YOUR LEGS OFF!

For a game that was ostensibly never supposed to make it to Quest, Blade & Sorcery: Nomad offers a valiant attempt to bring the visceral, physics-based combat of its PCVR sibling to mobile VR. While some elements fail to live up to the original, the overall feel of the action has been retained. Undoubtedly, Blade & Sorcery: Nomad will become an instant classic with many gamers in an ecosystem that offers very little else to fill this particular niche.

However, with almost no gameplay options beyond the cycle of god-like ultra-violence, the current Early Access iteration just feels dramatically unfinished. Perhaps when the promised updates arrive in 2022, Blades & Sorcery: Nomad will begin to feel more like a fully-fledged game, but as it stands it now, it plays like a title that has perfected one particular element of the game but still has a very, very long way to go.