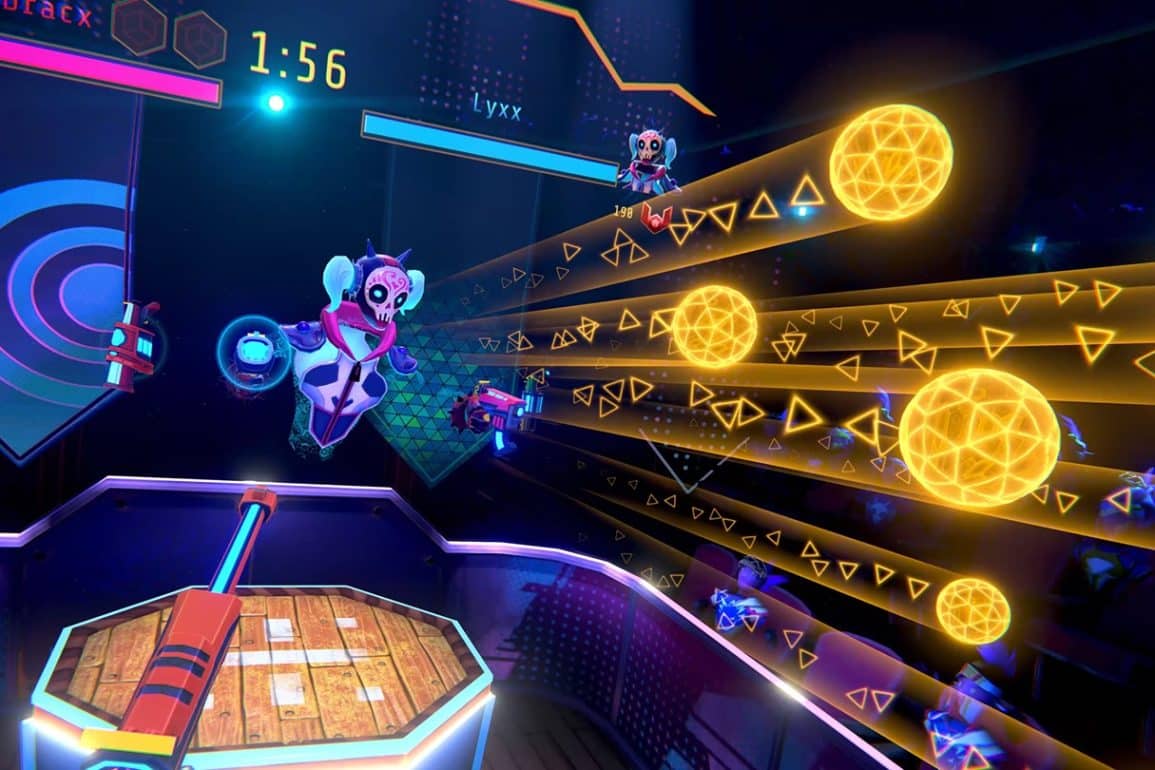 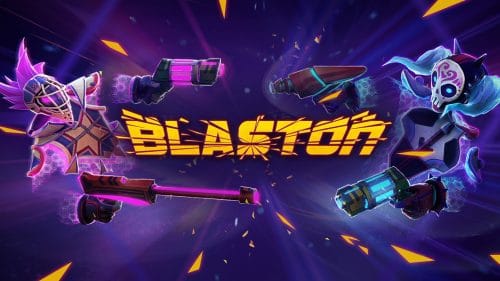 Blaston is the latest from Resolution Games and offers a slow-motion bullet hell. It forces you to dodge, duck and dive to evade attacks in a PvP combat game that combines skill, strategy, and speed with an array of futuristic weapons.

On the surface of it, Blaston is a fairly simple premise for a game. Two players stand on opposing pedestals while an array of futuristic weapons are periodically beamed in around them to facilitate the mayhem. Imagine the old “pistols at dawn” style dual if it was appropriated by the neon-clad rave kids of the late ’90s, then transported into the not too distant future. The weapons are designed in a relatively non-threatening way, reminding me more of the Super Soakers that I played with as a kid than anything capable of significant damage.

At a glance, you would be forgiven for thinking that Blaston is just a bit of casual shooting, but scratch the surface of the gameplay just a little, and you’ll find a fast-paced strategy game beating at its heart.

The array of weapons is a carefully crafted mix of speed, damage, and purpose. The ability to upgrade and change your loadout gives enough depth to create a meta-element, ensuring a cult status similar to games like Ironlights and Wands. Like Ironlights, Blaston has found that slowing down the action is the key to unlocking accessible, tactical gameplay. Balancing each weapon’s abilities lies at the centre of the games’ strategy.

After only a few matches, it becomes apparent that the game is less about shooting and more about controlling the play space. The key to success is to use your weapons tactically, pushing your opponent into a corner before actually trying for that big damage shot. This needs to happen while you’re dancing around your own platform, carefully planning your movements so that you always have a way out.

One criticism I have is that the gameplay cries out for at least a visible torso IK to do it justice. Instead, when you look down to check where you are relative to an incoming projectile, you’re met with an utterly unhelpful absence of anything. This leads to some pretty frustrating moments where you have to just guess if you’ve moved your invisible hitbox far enough to avoid damage. More than once, I took damage that felt unfair.

Graphically, Blaston gets the job done, with a clean, simple style that is vibrant yet grimy, making you feel like you’re in some kind of bizarre futuristic Fight Club. The character design is basic, with a disjointed set of floating body parts (head, torso, and hands) making up the player and opponent. However, these simplistic design choices should have allowed the IK to be a little more fleshed out, and Blaston definitely suffers from a lack of “self.”

Blaston has a minimal audio style, offering an electro-punk soundscape that does little more than add to a general background ambiance. While it’s far from inspired, it doesn’t detract from the experience in any way, and most of the time, you will barely be aware that it’s there at all. Spatial audio alerts you to which direction your next weapon has spawned from. However, I found this disappointingly underwhelming as the meek little blip that alerts you to a new item disappears into the various gun effects that fill combat.

Long, drawn-out waits, or a lack of AI to compete against when the player base is low, can often be attributed to the downfall of many online multiplayer games. Blaston deals with this quite nicely, so if no match is found in around 10 seconds, you are automatically launched into a bot match.

Thanks to some cleverly designed animations, it is sometimes hard to tell if you are in fact playing against AI or an actual opponent. The bots do things like adjusting their headset or wrist straps in such a way that you’re often not one hundred percent sure about what kind of match you’re in. Several times I found myself sure that I was facing off against a human opponent only to have the match interrupted as a real challenger entered the game. This effectively stretches out the longevity of the game as you never find yourself in frustrating voids with nothing to do.

That said, the AI really isn’t tough to beat, and after a couple of hours, beating the bots lost almost all of its initial challenge.

Along the way to mastering the delicate bullet ballet that is Blaston, you will continue to earn experience points and in-game currency. To stay competitive, you will need to expand your arsenal of weapons (cosmetics are also available) by amassing a small fortune in post-match loot. There are options to purchase additional coins, and herein lies one of the main points of contention with the game…

In order to unlock an item you first have to reach the required EXP threshold, so the good news is that every item is theoretically available to all players regardless of whether they purchase coins. However, with coins earned at an annoyingly slow pace, owning all the best weapons will either take a whole lot of grind or a whole lot of cash. While Blaston is not technically a pay-to-win game, it does come awfully close.

Blaston is an entertaining PvP dueller with enough depth to make it worth its relatively humble price tag. Still, it doesn’t offer enough substance or diversity to be worth much more. With a nice blend of strategy, action, and just enough physicality to work up a sweat, Blaston is both an accessible and challenging multiplayer-focused game. However, with a single game loop, limited AI, and an annoying in-game currency system, Blaston doesn’t pack enough punch to capture a whole new audience. If you enjoyed games like Ironlights, Wands, or even Skyworld: Kingdom Brawl then this may very well be for you.

Blaston
TLDR : Summary
Blaston is an enjoyable PvP dueller that offers a fun mix of strategy and action. Although light on content, it has an entertaining gameplay loop that is at it's best when played against a friend.
Concept
7
Gameplay
7
Graphics
7
Audio
5
Longevity
4
User Rating0 Votes
0
Pros
Easily accessible
Mix of Strategy and Action
Bots for single player practice
Cons
No torso IK
Unreliable hitboxes
Annoying microtransactions
6.5
Decent
Get it on the Oculus Store
Blaston