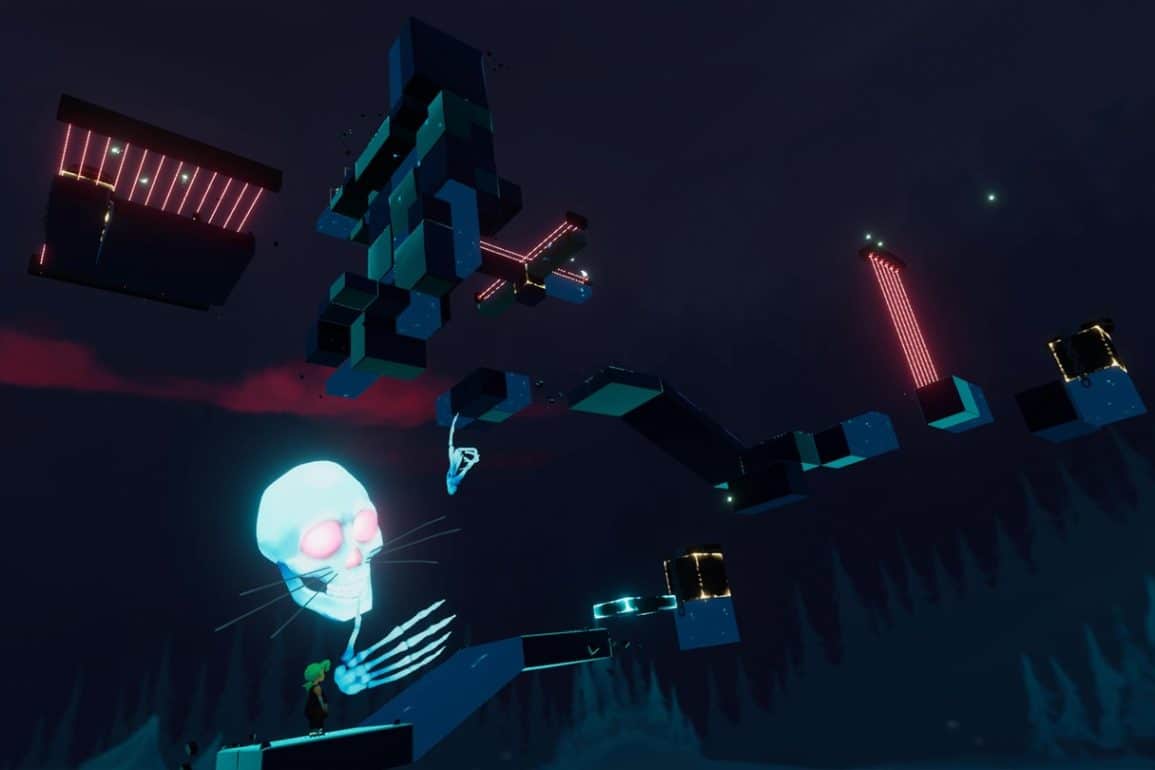 Platforming Puzzler You Can Play With a Friend 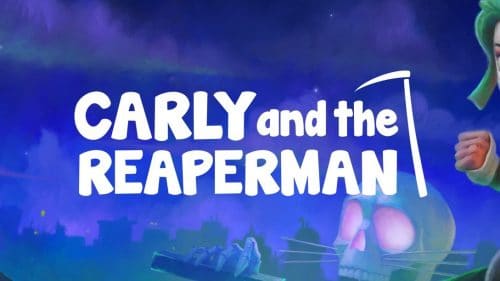 The virtual underworld of Carly and the Reaperman would not be a bad place for your soul to haunt for a while. Instead of a dreary limbo, this vision of the afterlife offers multi-story platforming puzzles to overcome, with stacks of colorful blocks. While you wait for divine judgment, you can collect hundreds of hidden and hard-to-reach fireflies, which unlock bonus levels. And except for the shadow fish, fire traps, and all-consuming doom whales, you’ve got nothing to worry about.

Carly and the Reaperman is a unique blend of third-person platforming and VR physics puzzles. You play as both Carly, a tiny person trying to escape the underworld and return to life, and the Reaperman, a giant floating skull, and pair of skeleton hands in the sky.

With minimal introduction, the game begins with Carly arriving at a spirit-inhabited subway station. She’s informed that if she can help free the spirits around her, they will help her on her journey. From this central hub world, you can enter different environments and begin exploring the game’s many puzzles.

The Reaperman, from high up in the sky, has a great view of the action. Through his eyes, Carly looks like a miniature figurine running through a living diorama. You can rotate this view by dragging the environment or with quick-turn keys on the left joystick. Like in The Curious Tale of the Stolen Pets, it’s a lot of fun just to scrutinize the tiniest details of this miniature world. Like, why are there vending machines in limbo, anyways?

While puzzles start off simple, with Reaperman placing blocks for Carly to reach higher ledges, new twists will regularly appear. For example, some stages are set in the dark, with a movable torch so the Reaperman can light the way. In a few timed levels, Carly has to keep moving to stay ahead of a gigantic, flying, world-destroying whale.

Drag Me To Heck

In addition to solo mode, Carly and the Reaperman was designed to be entirely playable in co-op. On Quest, this means a friend can join your multiplayer game using a code and take over either Carly or the Reaperman. This requires voice chat to coordinate where blocks should go, adding to the game’s complexity. Unfortunately, co-op mode also crashed a few times during our testing.

That said, it is undeniably fun to have a new way to interact in virtual space. Talking together through a puzzle can be engaging. The Reaperman can dress up in silly hats, even though you’d rarely see it unless you play as Carly. And you can even fist-bump, which is really a must-have feature for any game like this. Cross-play is promised through a playable PC and Mac client, although we did not have a chance to try that out for this review.

Carly and the Reaperman contains a lot of levels, and many of them are quite sprawling and complex. In general, I preferred the game’s more straightforward Mario-like platforming and timing-based levels instead of the confusing riddles and mazes, which lead to us getting stuck.

The Under Presents | Review

The puzzles are the main draw in this game, because the story doesn’t always come across well. It’s mostly told through bits of dialogue with spirits. There doesn’t seem to be any meaningful connection between completing puzzles and freeing lost souls. So, I pushed a block into place and hit the button, and now you can remember you used to be a bird? Okay, that works for us. On to the next level.

To help you find your way through the underworld, it would be nice if the game included a level select menu instead of returning you to the central hub each time. Because of this, it can be difficult to remember which sections you haven’t visited yet, and which ones you need to revisit to find 100% of the collectible fireflies.

If you’re lucky enough to have a friend who wants to play as the Reaperman to your Carly, or vice-versa, this is a solid choice for some virtual bonding. Even if you just play it solo, Carly’s journey is filled with soothing music and unusual art, along with challenging puzzles that require a lot of coordination.

This combination of console and VR gameplay styles is hardly an endless wasteland. You may not want to spend eons here, but for at least four or five hours, your soul should feel right at home.

Carly and the Reaperman
TLDR : Summary
Whether you play it solo or with a friend, Carly and the Reaperman's journey is all at once moody, soothing, and challenging.
Concept
8
Gameplay
8
Graphics
7.5
Audio
8
Longevity
9
User Rating0 Votes
0
Pros
Clever combination of platforming and physics gameplay
Enchanting art style
Lots of levels
Unique co-op mode and good solo options
Cons
Some frustrating puzzles
No level select menu
Limited attempt at storytelling
8
Spirited
Get it on the Oculus Store
Carly and the Reaperman