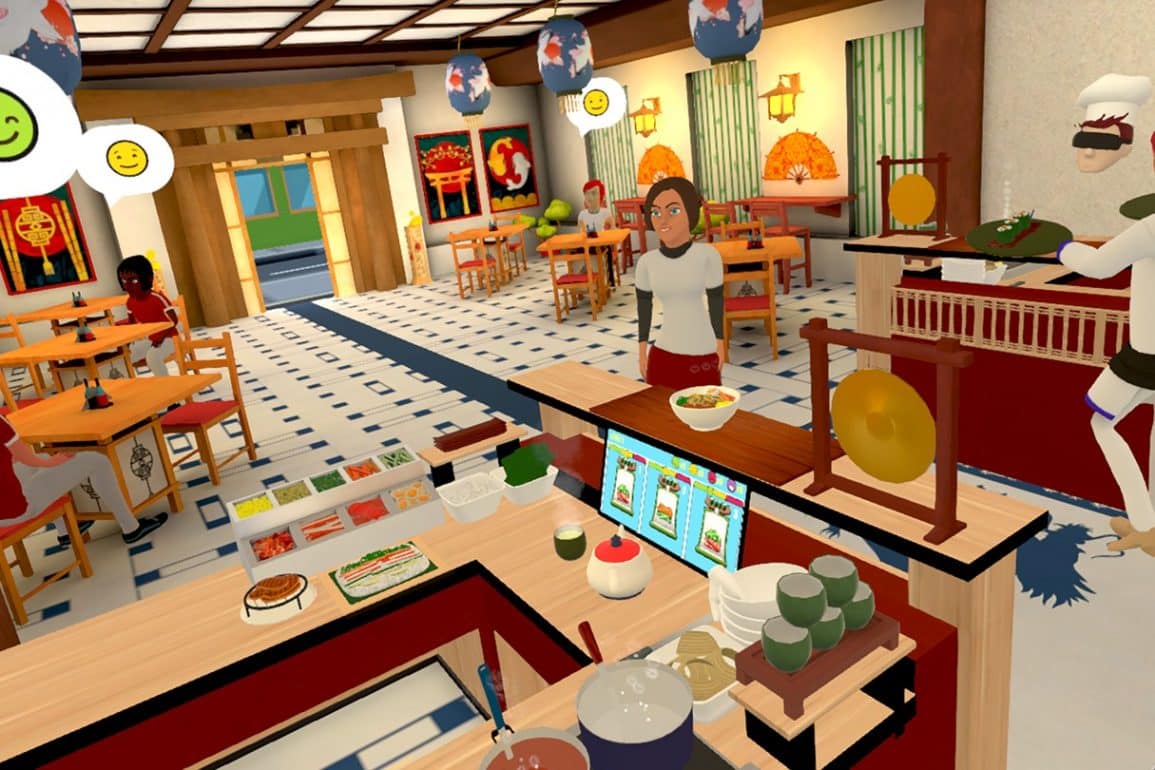 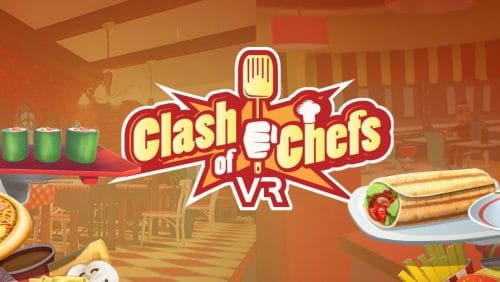 Clash of Chefs VR takes me back to a simpler time.

For my sins, I spent over a decade in the hospitality industry. Among the cavalcade of mind-numbing servitude which marked my time, my stint as a pizza chef/grill cook was among my favourites periods.

Call me a weirdo, but there is a particular zen that can be found somewhere within the chaos of a busy commercial kitchen. Almost achieving flow state, there’s a rhythm that becomes hypnotic, right up until it gets too hot or you are reminded of the fact that the general dining public is made up of monsters.

Now, thanks to FlatHill Games‘ Clash of Chefs, you too can experience the zen-like mastery of the culinary arts, all without the heat, the annoying customers or the ever so slightly unhinged Head Chef throwing plates across the kitchen.

Although, to be fair, that last part would actually be pretty cool in a game.

Out of the Frying Pan and onto the Quest

The little story at the beginning of this review wasn’t intended as a self-serving getting-to-know-you session for yours truly, but rather give context to the tone of this review. I am a big fan of cooking games and have been eagerly awaiting Clash of Chefs. It’s a genre that fails to resonate with a LOT of gamers, but for a certain few, there is a joy to be found that rivals a good rhythm game. That said, I am aware that time management games are a niche proposition, so I’ll try to be as objective as possible…

Clash of Chefs VR is as straightforward in its concept as a cooking game can be. The player embodies a floating set of hands positioned in a busy kitchen, surrounded by all the ingredients and equipment needed to create a range of meals and side dishes. As customers enter your restaurant, orders will appear on your display, introducing new dishes and components as the pace and complexity increase. The longer it takes you to complete an order, the lower your score, so advance preparation is key. However, leave a dish out for too long, and it will spoil or go cold, and you’ll have to start all over again.

There are four different kitchens for you to master, which will see you pumping out anything from a burger and fries to sushi and green tea. Each kitchen has its own set of mechanics, which require the player to settle into a different rhythm and give some much-needed variety to the gameplay. Grills need to be managed, salad items need to be chopped, and drinks must be poured. No individual task will trip you up with its complexity, but the challenge comes from balancing all tasks without slowing down.

Some of the later cuisines feel less designed around engaging mechanics and motions and more around padding the gameplay out a little. Things become less about cooking and more about stacking, which was my main complaint with the much-praised Cook-Out. In the end, the American kitchen is the only one that feels properly balanced, leaving the other cuisines feeling slightly undercooked.

Clash of Chefs manages the basics of a cooking game very well. The layout of the kitchen makes sense, with everything feeling accessible and intuitive. The orders appear on screen in a clearly identifiable way which means that even when working quickly, it’s easy to distinguish the needed components. Grabbing and placing items feels just as it should, which is one of the most challenging aspects of the genre and is definitely a strong point in Clash of Chefs. Although I experienced one or two minimal issues, generally, you never have to worry about grabbing the wrong item or missing altogether, which allows you to play confidently at speed.

The most noteworthy exception to this rule is the American kitchen fries, which caused me constant problems. Grab the handle slightly wrong, and the basket would reset in the fryer, making you slow down and grab again. Even worse is when you slightly misalign the basket and watch helplessly as your golden chunks of potato-y goodness disappear into an inexplicable void, giving you just enough time to stifle some profanity or another before starting again.

While Clash of Chefs delivers the basics admirably, it, unfortunately, doesn’t bring much else to the table. While the genre is small, it is well enough developed that one could reasonably wish that the developers had infused their base mechanics with a little more creativity and flair. Games like All Hail the Cook-o-Tron introduce Boss Fights where your opponent can interfere with your kitchen by way of sabotaging your equipment or (my favourite) turning off your gravity so that your ingredients float all over the place. The outstanding Rags to Dishes offers an upgrade path for your equipment, allowing you to streamline your workflow and reduce the more annoying manual components.

Sure, Clash of Chefs delivers the best fundamentals that the Quest has seen, but it doesn’t come even close to pushing the genre forward in any way. As in actual cooking, seasoning the basics with something unexpected and original can decide between good and great.

Clash of Chefs is not exactly visually spectacular, but it doesn’t really need to be. Each restaurant is delivered in a clear, cartoon-like fashion that is entirely functional but not quite breath-taking. The most important graphical element in any cooking game is how easily the visual language can be disseminated while moving at speed, and Clash of Chefs does that very well.

The combinations of ingredients required for any given order are clearly understood, as are the visual cues telling you if a component is ready, burnt, or spoiled. The only caveats to this functionally are a few minor animations that are a little jarring. Particularly noticeable is when ladles reset themselves and seem to skip a frame or two to find their way back to their appropriate resting place.

Much like the simple cheeseburgers you’ll spend your time making, the graphics won’t blow your mind, but they get the job done.

The audio is, unfortunately, far more underwhelming, and serviceable feels a little generous here. There are auditory cues to indicate when certain components are complete or when a new order comes in. While they are helpful, they lack any real sense of character and are so innocuous that they often don’t register as you play.

The ambient music is broadly stereotyped towards the particular ethnic theme of the restaurant but does little to add tension or atmosphere, and there is a real missed opportunity here. Part of the thrill of the kitchen is the buzz; the sounds of a busy restaurant as diners, serving staff, sizzling grills and background music all compete for dominance. It’s an environment that should naturally lend itself to an exciting, atmospheric soundscape, and sadly the half-baked soundscape of Clash of Chefs does very little to urge you towards faster times and bigger scores.

Clash of Chefs is a challenging game for which to gauge longevity. With four unique cuisines to master, each consisting of 20 levels of increasing difficulty, it’s fair to say that there’s some meat on the bones here. Each restaurant can be conquered in about an hour, so assuming you only play through the campaign, you have at least 3-4 hours on the plate right from the first course.

But, if, like myself, you find yourself particularly enjoying your time in Clash, then there is a lot more time on offer. With an endless mode that allows you to zone out and push out orders as long as you can and tantalising leader boards to tempt you back for seconds, there are hours of fun to be had here.

That is, of course, if time management is your thing. If not, this game will just remind you of your worst part-time job in high school, and the whole affair will be over in short order.

Clash of Chefs also launches with a PvP multiplayer mode which, for many, will be the icing on the proverbial cake. Chefs will battle in real-time to see who can speed through their orders the fastest, and although I was not able to get in a game during my pre-release access, I am looking forward to my first culinary showdown as the game goes live.

While the ability to compete with other chefs or with ghost runs of the leader boards top scorers is an excellent addition, I can’t help but feel that a trick is being missed here. One of the best elements of PvP gaming is the ability to directly impact your opponent, and this mode is just crying out for something a little more innovative than simply being the fastest.

To date, no cooking game has integrated a truly combative culinary experience, and I fear that the current format will leave players hungry for more.

Can I offer You a Digestive?

Clash of Chefs is an excellent addition to the Quest library insofar as it delivers the most intuitive and accessible cooking experience on the platform to date. For enthusiasts of the genre, it will fill a hole in the library that has been missing for some time and will undoubtedly become the gameplay equivalent of comfort food for many.

However, despite delivering all the essential elements of the genre admirably, Clash of Chefs misses the subtle nuance that this niche is capable of that could have seen it elevated from digital fast food to something extraordinary. With just a bit more innovation and attention to unique, rewarding mechanics, FlatHill Games could have earned their Michelin Star. Sadly, like most fast food, Clash of Chefs was tasty but left me hungry for more.

Clash of Chefs
TLDR : Summary
Clash of Chefs offers the most intuitive and accessible iteration of the often overlooked time management niche that the Quest library has seen. While it doesn't push the genre's boundaries in any way, it delivers the basics in a way that is fast, fun and easy to come back for more.
Concept
6.5
Gameplay
7.5
Graphics
6
Audio
5
Longevity
7.5
User Rating0 Votes
0
Pros
Multiplayer Option
Variety of Kitchens
Easy, intuitive controls
Cons
Occasional frustrating glitches on certain items
Some kitchens lack depth and feel repetitive
Some slightly janky animations which can be
7
Tasty
Get it on the Oculus Store
Clash of Chefs