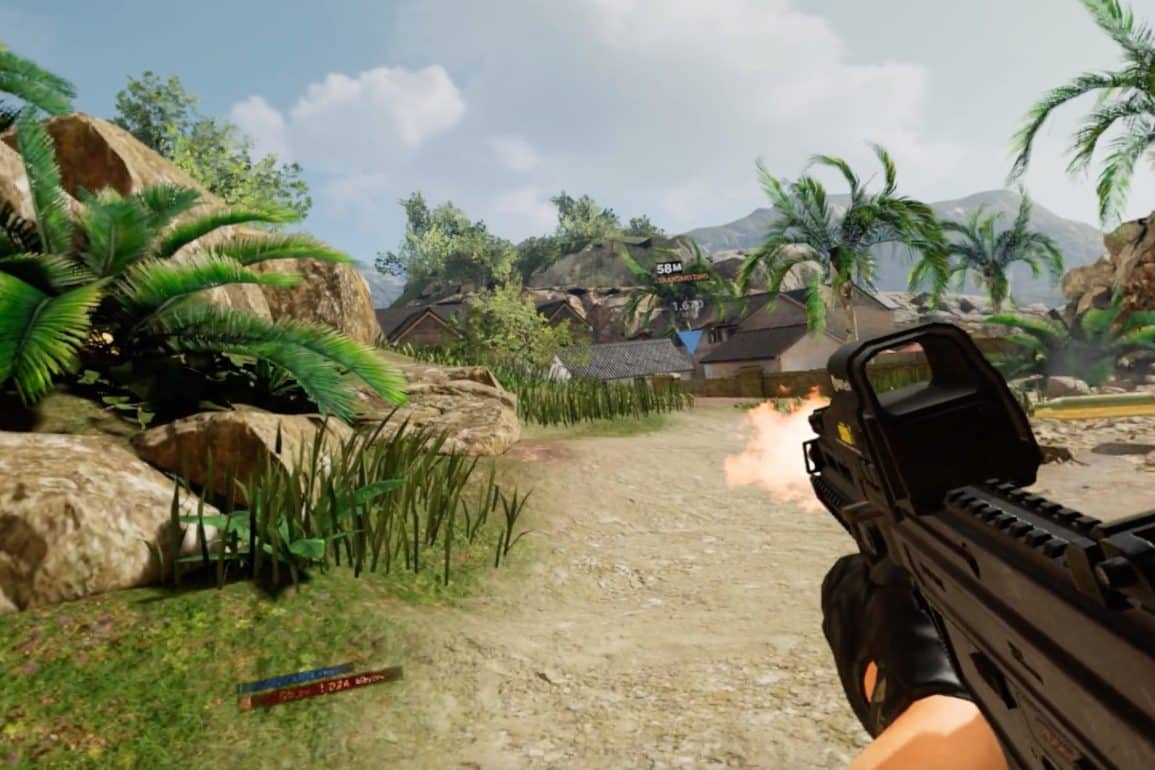 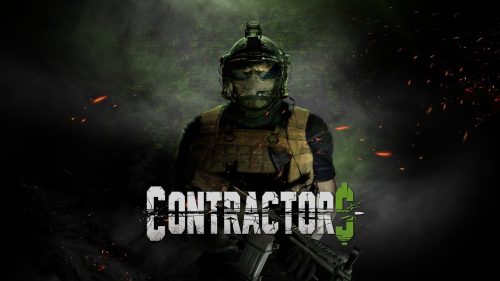 Contractors VR is a multiplayer first-person shooter with a contemporary military theme. Whilst this type of game is pretty much standard in pancake gaming, there are surprisingly few titles on the Quest which inhabit the genre. The only other one to find official release on the Oculus store so far is Onward, and that’s po-faced and technically inept. Will Contractors VR scream over the treetops in a chopper blaring out Fats Domino, bringing enlightenment and freedom to us VR peasants? Or will it accidentally self-destruct while it’s trying to find reverse on a Soviet tank?

GUN AND RUN AND FUN

It might have its feet in the real world, with grimy war-torn present-day environments and realistic weapons, but Contractors VR deliberately aims for a more immediate, Call of Duty–esque style of play. It also has a healthy dose of irreverence running through it. It wants you to think that, like an actual merc only in it for the money, it knows its way around a gun but isn’t above having a bit of fun for the sake of it. In the main hub, there are all sorts of things you can do to bugger about without even getting into a round proper. You can shoot hoops, trigger a wave of shuffling, juddering zombies to headshot, and indulge yourself in some surprisingly engaging shooting challenges to hone your skills. It all speaks to something more lighthearted than the pursed-lipped act of reloading an AK-47 might otherwise suggest, and it’s quite refreshing as a result.

First things first – if you’re looking at Contractors VR for any kind of single-player entertainment beyond target practice, then don’t. There is a mode for playing the game types with bots instead of other human players, but it isn’t so much half-baked as still in the cupboard with its constituent elements in their packaging. There’s no scripted story mode, and the bots make a poor replacement for human players. To play Contractors VR this way is to see the worst side of the game and is not recommended. (If you want a story FPS for your Quest, you might be better off looking at the OK-ish Warhammer 40,000: Battle Sister or Star Wars: Tales from the Galaxy’s Edge).

Multiplayer is where it’s at. There are the game modes you might expect, from team-based deathmatch to base capture, and a healthy mix of co-op, team-based and competitive missions. There’s crossplay with the Oculus Rift version, which helps the game have a pretty healthy player base. There’s a pretty fully-featured loadout system too, for those that like to tinker. Guns and secondary weapons are assigned an equip cost; choose a more powerful weapon and you’ll have to leave a couple of those grenades back in the tent.

It’s accessible and sensible, and it works.

The gunplay is excellent; it feels solid and sounds great. Headshots count, and this sort of action is always more thrilling in VR. (This is what you’d hope, for being the primary staple of the genre, but it doesn’t always pan out that way). There’s a pleasing array of movement and comfort options and, for those that like their accessories, Contractors VR also supports Cybershoes and various gunstock controller mounts. Team comms can be handled with a push-to-talk walkie talkie style system, or you can switch your mic to live-mode for constant chatter. My multiplayer experience so far is that most people seem to prefer push-to-talk, which suits me just fine.

Depending on the company you find yourself in, things will either be enormous fun or boringly dire. That isn’t so much a comment on Contractors VR per se, but the genre, or maybe even life itself. Team comms are important, but if you’re in a more surly and silent round, there’s enough info to determine what’s going on and who to fire at. It’s always more fun when people throw themselves into the VR-ness of it all – hitting the deck, hiding, ducking, and being physically devious; but that’s both disappointingly rare and emphasises one of the silliest bits of the game…

You see, Contractors VR gives you a choice between seeing your virtual hands floating or attached to a body with inverse kinematics. If you choose the latter, it’ll attempt to convincingly interpret what your character’s body would be doing based on where your hands are and what they’re doing. Yeah, it doesn’t work. Go for hands only, is my advice. Otherwise, you’ll like as not find out what it would be like to be an epileptic Dolly Parton cosplaying as Master Chief whilst trying to play Cyberpunk 2077.

Where this option doesn’t apply of course is to other player models. Whilst I haven’t seen anything as dire as the broken marionettes in Onward, the other players in Contractors VR can look like they have curvature of the soul; broken, sorry things with arms at impossible angles and warping legs. It can lend the proceedings an unintentionally comedic edge, to put it mildly. It’s not rare to see an enemy player who’s trying to get a bead on you and looks not so much like a highly-trained combatant as Edvard Munch’s The Scream in camo.

There are other things which make it seem a bit low budget. The sound, apart from the pleasing clicks and booms of the guns, is average to crap. Positional audio is rubbish, if non-existent. This affects the gameplay as it’s often hard to tell where tussles are happening; it often just sounds like pop-guns are firing in a bath somewhere.

When considering the Quest as a new console purchase, many gamers seem to need to know if there’s a CoD-type shooter on it before being convinced to take the plunge. The long and the short of it is that there’s nothing as slick as a traditional console FPS, particularly for multiplayer, on the Quest at present. Contractors VR comes a little closer than most others that aren’t the excellent Population: One, and it’s infused with a sense of fun. But there’s an all-pervasive amount of lo-fi jank to proceedings, which is true of most offerings of the genre on the Quest. I don’t really understand why first-person shooters should suffer so on the Quest. I can fathom that it’s not very powerful compared to current-gen consoles, or even last-gen ones. However, I don’t see why we need to endure terrible warping textures and polygons, pop-in, and awful character models when other games do it right. I’d prefer a stylised art style like that found in Dead and Buried II, Lies Beneath, or Jurassic World Aftermath than these occasionally sub-PSOne efforts. It does quite a bit to convince you that the new frontier of VR is actually a bit pony. Beyond that, there’s absolutely no excuse for menus and on-screen displays looking so ugly and placeholder-ish; nice fonts and pleasing UI design cost little, performance-wise.

Contractors VR can be a huge amount of fun with other players and is generally likeable and fully-featured. For many, it will be an excellent way to unwind over Christmas, albeit violently. It’s just a pity that some of its technical shortcomings are enough to hold it back from being better.

Contractors VR
TLDR : Summary
Contractors is rough around the edges, but it's one of the better multiplayer shooters available on the Quest, with a good amount of content. It's not going to set the world on fire, but if you're after some shooty military action with friends, it's a more polished and rounded proposition than Onward or Pavlov.
Concept
6
Gameplay
7
Graphics
6
Audio
5
Longevity
6
User Rating0 Votes
0
Pros
Good shooting action
Decent content
Sense of fun
Better than Onward
Cons
Poor sound
Hilarious player models
Aftertaste of jank
Rubbish single-player
6.5
Above Average
Get it on the Oculus Store
Contractors VR