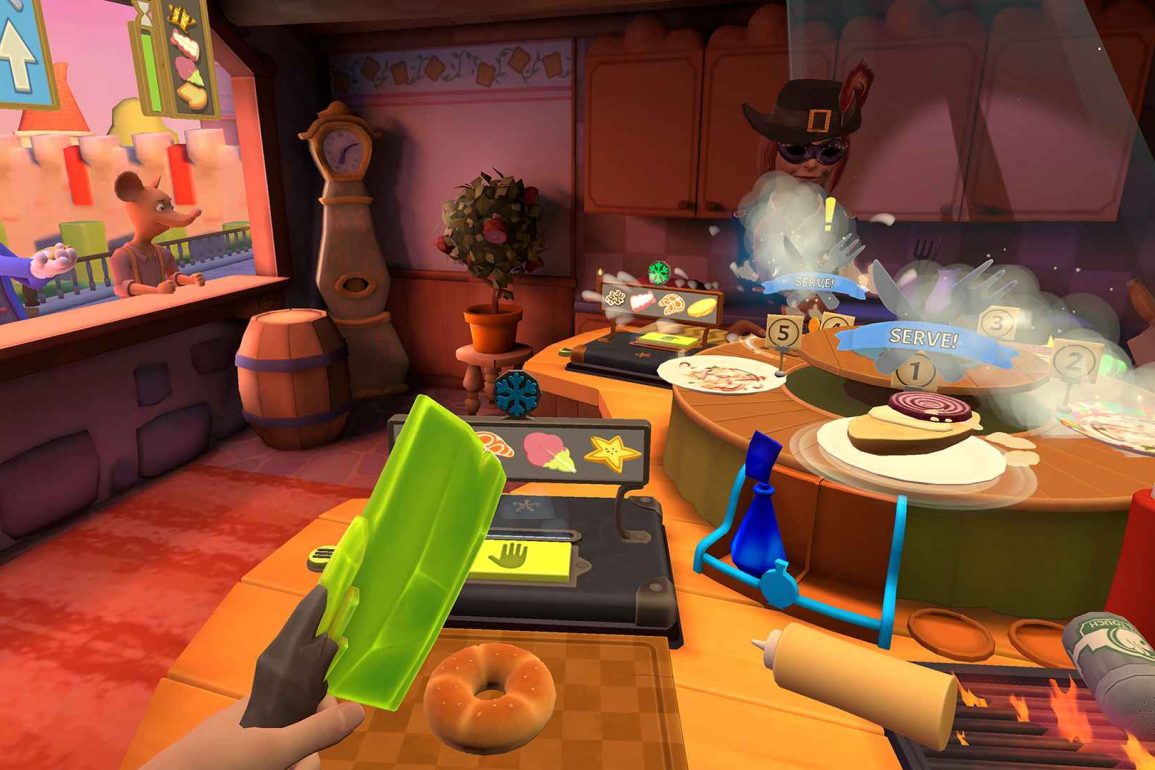 Get Cooking With Some Friends 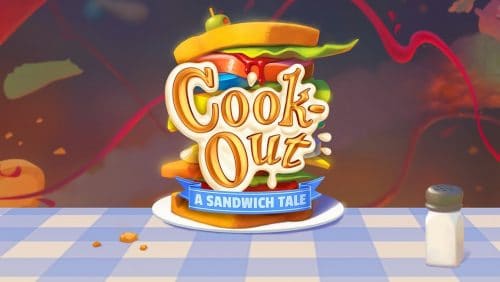 Cook-Out, fully titled Cook-Out: A Sandwich Tale is so similar to Overcooked!, an excellent multi-platform co-op cooking game, that if you’ve played that, this could be the shortest review I’ve ever written; Cook-Out is pretty much OverCooked! in VR and you can play it on the Oculus Quest, and while it may be a pretty good single-player game, it’s a fantastic multiplayer game.

If not, I’ll have to assume you haven’t played OverCooked! (or for that matter, Overcooked! 2, the inevitable sequel) and need a bit more to go on.

We Do This For Animals and Beasts

Cook-Out places you in a cook’s cabin in a fairy tale town. Creatures come over to your cabin and order increasingly complicated sandwich orders, and you have to prepare those orders on a carousel in the middle of your kitchen, and place them on the delivery platform when they’re ready. The compendium of creatures starts with mice, who ask for simple sandwiches and are pretty easy to please, and soon includes, among others, werewolves whose orders suit their enormous appetites, and cats who aren’t tolerant to any mistakes. You also have rabbits who are always in a rush, and never give you quite enough time before they grow impatient and leave. You get the picture.

The gameplay is fast and frantic and consists mainly of looking at the order, picking up the required ingredients, chopping them up with your cleaver, and placing them in the correct order on the correctly numbered plate. In Overcooked!, orders were not assigned to specific dishes, and as long as a plate matched a requested order, you were good to go, so there was a little more room for turning a mistake into a happy accident, with all the zen of Bob Ross. Cook-Out is less forgiving in this respect. Like in Overcooked, you rarely have all the ingredients you need for the incoming orders. When playing alone, you have to rely on the help of at least one other cook, the Rob-Bot, who has ingredients you don’t and is happy to help, as long as you keep his battery charged by winding up his crank-shaft every couple of minutes.

This Ain’t No Ordinary Kitchen

As you progress through the games’ fifty levels, nicely spread out over 18 towns, you earn some power-ups and get to upgrade your equipment. Some power-ups will instantly make any sandwich perfect. Another power-up will make time crawl for a while, allowing you to squeeze in an order or two before a cat or werewolf storms off in a rage. Some will sharpen your cleaver so that it takes one quick chop to prepare an ingredient.

Later on in the game, you’ll also be tasked with grilling some ingredients as well as washing dishes. The game piles on the difficulty quite well, and soon you’ll find your cooking sessions are very, very hectic.

The overall gameplay of Cook-Out is simple enough but very engaging, the graphics are fun and cartoony, and the sound effects work, the music is what you’d expect for the genre, zany and fast, but isn’t particularly memorable.

Too Many Chefs Just Make It Better

Where the fun really, and I mean really, kicks in is in multiplayer. Cook-Out, like Overcooked! before it, revels in its multiplayer chaos. When played online, whether with friends or with strangers online, it’s a beautiful, hilarious, chaotic frenzy of cooperation. You’ll all be telling each other what’s needed next, what you’ll prepare, and what they need to prepare, congratulating yourselves when you do well, and trying to come up with strategies to coordinate yourselves better. It’s engaging, and it’s friendly, and it’s a joy to play. Also, people will squirt ketchup and mustard at you – get used to that! When played with your significant other (assuming they also have a Quest), well, let’s say it’ll test your relationship as you shout orders at each other, blame each other for any mistakes or delayed orders, and generally turn into the worst version of yourself. Did I say it was fun? It is!

Cook-Out For The Win

It’s hard to give Cook-Out much credit for originality unless somebody corrects me and informs me that it existed in some form or another before Overcooked! did, but that doesn’t mean it’s not a great game. The unashamed SJW in me doesn’t like the fact that Cook-Out owes its existence to the work of Ghost Town Games Ltd., the original developers of Overcooked!, but the gamer in me almost doesn’t care.

Cook-Out is the most multiplayer fun I’ve had on Quest, and I highly recommend it. It’s a family-friendly game that’s fun for all ages, and perfect to play both with strangers and with partners and friends. It’s challenging, offers a good load of variety, and massive replay value. It’s definitely making our list of top Quest games!

Cook-Out
TLDR : Summary
Cook-Out, being pretty much Overcooked! in VR and available on the Oculus Quest is a fun cooking game in singleplayer that turns into fantastic fun as a multiplayer game. Miss it at your peril.
Concept
6.5
Gameplay
9
Graphics
8
Audio
7.5
Longevity
8
User Rating0 Votes
0
Pros
Lengthy single player campaign
Good variety of powerups
Fantastic multiplayer gameplay
Cons
It's Overcooked! in VR, so loses a few points for originality
Audio could be better
Less of a blast when played alone, but that's barely a complaint
8.5
Delicious
Get it on the Oculus Store
Cook-Out