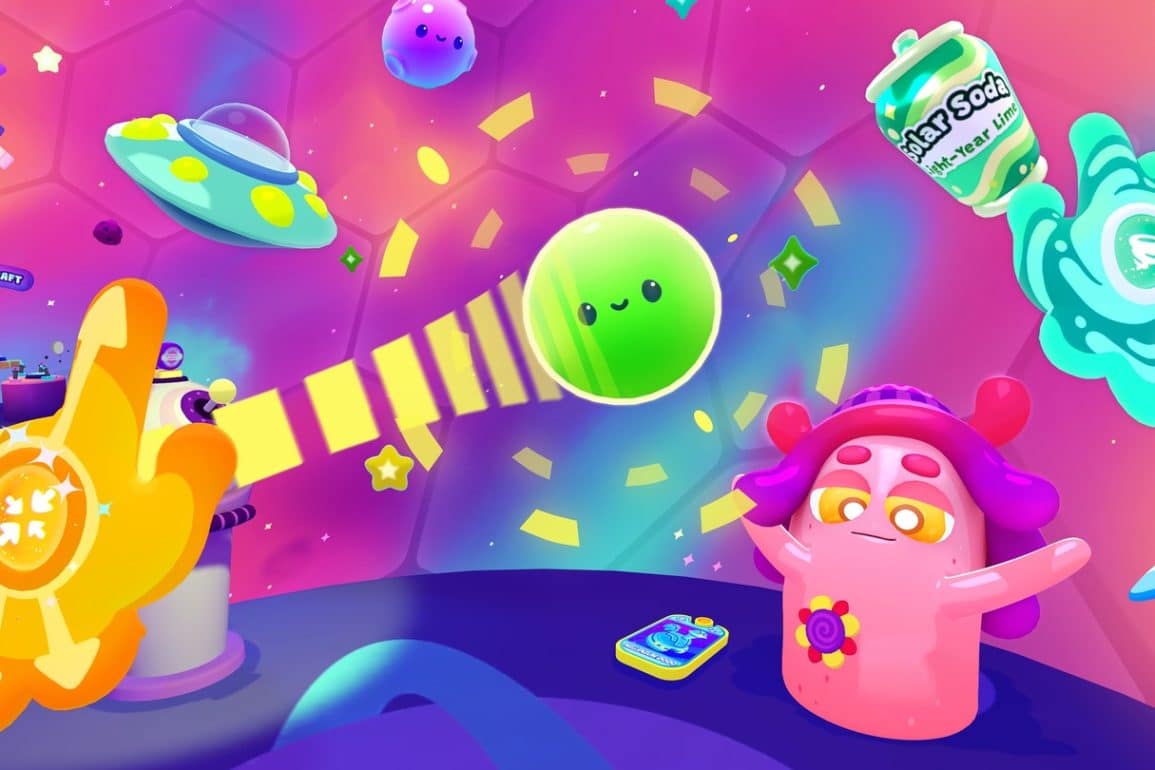 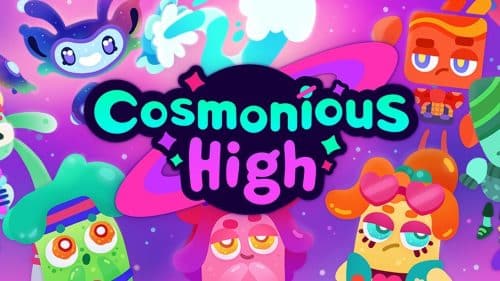 Do you remember your first day at high school? The nerves? The excitement? The school bus losing control in an asteroid field and crash landing into the maintenance closet?

Not the last one, huh? Well, hustle, new kid, because that’s not the only disaster that awaits you on your first day at Cosmonious High, as you begin to investigate how exactly that asteroid got through the school’s defences and why so much is suddenly going wrong with the school.

In this latest game from Job Simulator devs Owlchemy Labs, the player, usually referred to by some variation of ‘New kid’, is the first enrollee from the ‘Prismi’ species at the eponymous intergalactic institution. These aliens are blessed with the ability to adapt when placed in a difficult situation. This is achieved by spontaneously developing a new power. The first of these evolutions is the water power granted in the very first moments of the game. It’s used to escape the burning school bus and then put out residual fires around a campus that has suffered a meteor strike. That’s not all, though. You can use the new ability to water plants, wash paint away, and refill fountains. Other powers include Ice, Fire, and Telepathy. The powers you develop during the game evolve for a specific purpose, but none are ever restricted to being used for only that purpose. There are eight in total, selected from an intuitive menu that appears on the back of each hand.

As you progress past the first few fiery moments of Cosmonious High, you start getting introduced to the game’s cast of NPCs, who give you tips on how to play. But very little instruction is actually needed because the controls are incredibly intuitive, even if you missed out on the developer’s previous games.

If you are familiar with Owlchemy’s previous titles, however, you’ll know that getting ‘hands-on’ with anything and everything in a game world is a crucial pillar of their creative ethos. With the experience of ‘Job Simulator‘ and ‘Vacation Simulator‘ behind them, they bring such immersion to the environmental interactions in Cosmonious High that these gestures have begun to bleed into my everyday life. You can summon any in-game item into your hand by simply pointing at it and flicking your wrist towards you. It wasn’t long after playing for a few hours that I believed for a tiny moment that I could achieve this feat with my real-world TV remote. A few hours later, I wondered what my desk lamp might be thinking. It’s pretty incredible that a game that’s so visually unrealistic can still seep into one’s consciousness in this way.

The game builds its more structured activities based on total but straightforward interactivity. These are built around various subjects taught at the school – all of which must be passed with sufficient credits.

Immediately available classes are Visualetics and Chemosophy. The former is where you can combine your water power with pigments and then paint… well, everything and anything really. The latter is closer to ‘Job/Vacation Simulator’ territory as you stand behind a counter combining and stirring coloured liquids to make new compounds and materials. These, again, can be applied to all the beakers, books, hats, balls, and literally anything else you can find lying around the school. Want to cover an ‘Among Us’ plushy with Stickium and throw it at the ceiling? Fill your boots, newbie!

Later on, you open Astralgebra, where you can study planets. Well, I say ‘study’; it’s more like ‘create’ planets… albeit small ones. Other classes include Socionic Arts and Auditoriology, with activities like treating a sick pet alien and singing small creatures into existence.

Each class offers a unique new way to interact with the world, and the results are rarely confined to the room you learnt them in.

With almost everything in the game able to be picked up, thrown, kept, or eaten, you could be forgiven for thinking that this would be the core of the world’s believability. But it’s actually almost everything else that makes Cosmonious High feel like a living environment. Characters chat with each other naturally until you get their attention with a wave or by selecting an emoji from the speech bubble you pull from your mouth, the malfunctioning intercom provides the signature Owlchemy tone, and despite only having a dozen other students and a handful of teachers, the whole school feels genuinely alive.

This is helped in no small measure by the game’s open-world nature. The map is relatively small, with just around twenty rooms and corridors. There is a ‘hub’ of sorts in the central ‘Grand Hall’, but there are pathways and secret passages that link areas without revisiting the hall. Like all the best open-world games, it’s sometimes difficult to complete an objective without getting distracted by something else.

Outside of gaining classroom credit, each of the dozen other characters has their own story for you to get involved with. There are also broken devices to fix and debris to clean up everywhere you look. There are even faint echoes of a Metroidvania in the way you need particular abilities to access locked-out areas and routes to progress.

One of the best aspects of Cosmonious High may initially put some players off. Set in a high school, with a kinetic art style, day-glow palette and excitable voice work, people might pre-judge this as a ‘childish’ game or, at least, one aimed at a younger demographic.

While it’s true that there’s nothing in the game that you couldn’t show even the youngest VR enthusiast, the developer’s reason for the primary colours and lack of any real threat or peril is that the game was born from the idea of an ‘optimistic future’.

What feels like a carefree and easy environment has clearly been put together with fantastic attention to detail. The school and everything in it has a bulbous, cartoony look that leans heavily towards secondary colours and rounded edges. It really helps it feel like a cohesive and organically constructed facility. The 12 students all have an individual look and personality, revealed through the art and voice-work. Despite coming from three easily identified species of aliens, their individuality isn’t constrained by the things that set that species apart from the others.

Pronouns in the game are also varied but handled so naturally that I didn’t even pick up on them at first. A particular early game quest sees you aid one character in the romantic pursuit of another a la ‘Cyrano De Bergerac’. As I completed this task, I did so in the casual belief that the characters were both male and gay. As I composed this review, however, I realised that I wasn’t sure that either character ever identified as male or gay. It’s a great credit to the developers and their flair for natural dialogue that this was the case, and shame on me for not paying better attention.

In the beautiful, inclusive world of Cosmonious High, there are no judgements and definitely no pre-judgements. As a result, it looks and feels like a fantastic place to go to school.

Cosmonious High also sounds excellent. You may have gathered that the character voices are exceptional, conveying personality with a sense of humour and individuality that perfectly aligns with the rest of the game. The music is similarly cohesive, being largely ambient and often overheard, in a brilliantly organic way, from nearby speakers or another student’s headphones. There are school anthems, fanfares, and hilarious in-world pop songs with full vocals; “Can’t Stop Me From Stretchin’ my Goo” was my personal favourite, but they’re all total bangers.

Too GOO-d to be true?

WIth a gameworld constructed to be a giant toy box, it seems nit-picky to complain that there’s little challenge in the game. The vibe is geared towards letting the player have fun, and it nails this completely. Still, it wouldn’t have hurt to have a few more complex puzzles, even if they were optional, to provide some extra satisfaction along the way.

However, a more serious concern is the nature of movement in the game. It’s become the norm in 3rd wave VR to be able to teleport by pushing a stick forward and then rotating it to choose the direction you face when you ‘land’. Cosmonious High employs only half of this, the first part; the rotation aspect is absent and sorely missed.

Hopping to a new location and then turning in increments (if you’re playing seated) is clunky and incredibly jarring in a game world where everything else feels natural and fluid. Perhaps it was a bug in my review copy or something that can be changed with a patch. I hope so because otherwise, it’s a bizarre and counter-intuitive creative choice.

Even with the clumsy teleportation throwing a tack in my path, I finished the main story in 4 to 5 hours – but I reached that end-game with only half of the possible 100 Credits collected.

You’d have to pay me an enormous amount of real-world money to convince me to go back to my real-world high school, but you wouldn’t be able to stop me from clocking at least a few more hours at Cosmonious high. I’ll be heading back to find those last few Blebs, open those space-ball hoops, and collect the missing cards from my Pirates of the Gooniverse set.

GOO-ing for the hat-trick

Owlchemy Labs have already shown us they’re masters of the micro-sandbox with the’ Job’ and’ Vacation’ Simulator games. While it’s by no means huge, Cosmonious High brings a much larger sense of scale than its two predecessors in every way. The deceptively multi-layered characters are more numerous and better realised. The game’s world is elevated beyond anything we’ve seen from the developer. Its design is wonderfully consistent and vibrant and brought together with so much class that it makes the game a brilliantly fun experience.

The control issue is a small fly in a delicious soup, but even that can’t get in the way of a great experience that, unlike too many recent games, completely embodies what VR is, or should be, about. More than once, as I ended a session, I tried to place my controllers on a surface that only existed in the game – and I really don’t think there’s any higher praise.