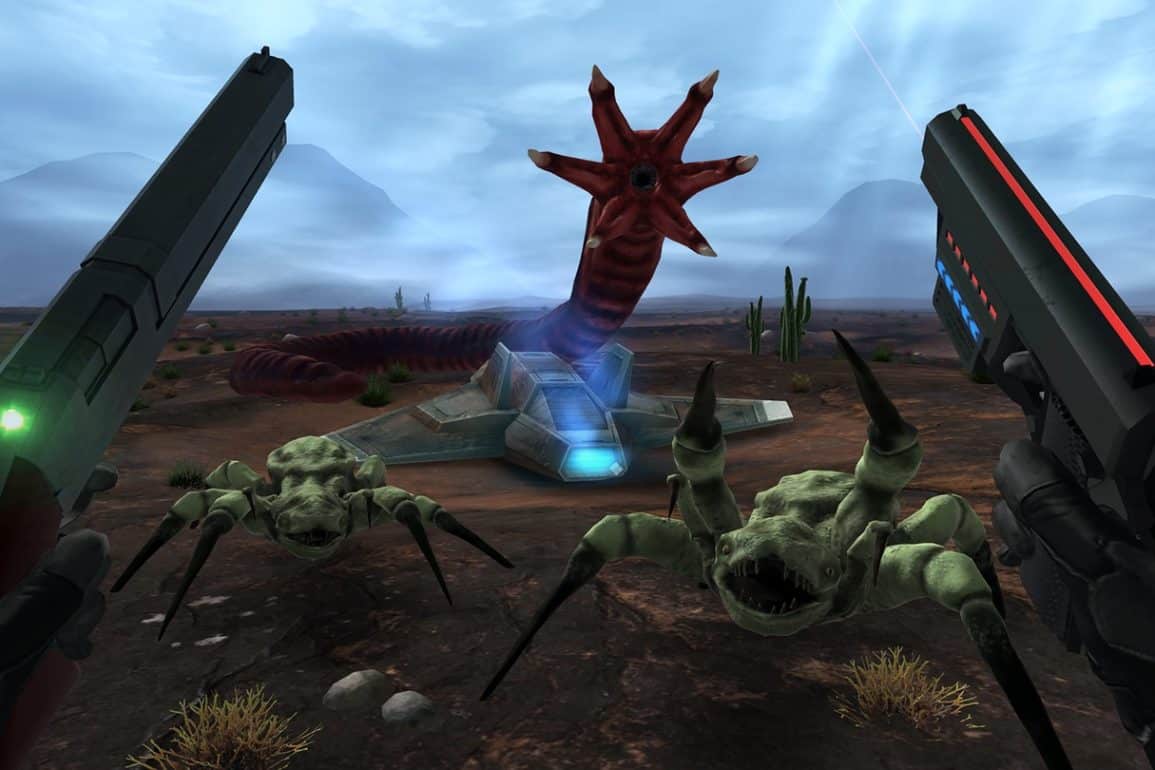 Not Your Average Wave Shooter 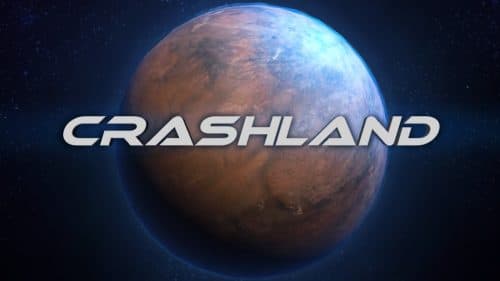 Despite having a history stretching back to 2013, Crashland has literally crashlanded onto the Quest store as if out of thin air. Created by veteran indie developer Llŷr ap Cenydd, Crashland is the latest iteration of the divisive wave-shooter genre to come to Quest. Now, before any of you check out of the review, eyes rolling and groaning about “another tech demo”, let me stop you right there. Stick with me, I’ll make it worth your while.

Crashland does indeed see you fending off hordes of enemies. Yes, indeed, Crashland doesn’t have some convoluted narrative giving you an emotional reason to kill its monsters. But it is also true that Crashland has an intensely deep and well thought out gameplay loop that will provide some of the most intense action that the Quest can provide. I understand that to many, that will not be enough. The simple utterance of the dirty words “wave shooter” will elicit an instant nope. To those people, I can say sincerely, it’s your loss.

I hope you shoot better than you fly

Crashland has a simple enough premise. You are a space gladiator who crashlands onto various planets to face off against the local inhabitants until rescue arrives. There’s really nothing else to it, and nor, quite frankly, does there need to be. I’m sure the same experience could be delivered with some exposition or another that gives the player a reason to push through the minutes of non-stop violence, but in this case, it would probably just be a hindrance. At the end of the day, Crashland is confident enough in the core gameplay loop that it doesn’t dress it up in plot-based connivances. As far as I’m concerned, that confidence pays off.

Combat is entirely projectile-based, with the player equipped with a pistol-like primary weapon and a “boomstick” weapon. The boomstick is essentially a high-powered secondary weapon that operates on a cooldown and provides your in-game motion sensor. This innocuous gadget is vital. You will need to pay close attention to it as the insidious red dots converge on you, or you will find yourself in trouble very quickly.

Both weapons can be upgraded via powerups that drop from the sky throughout the level. You can cycle through the options to select the best possible weapon for each situation. Given the extensive range of enemies you will encounter and their individual abilities, this versatility is often the difference between life and death.

Before launch, the player selects from a range of perks. These perks unlock over time as the player levels up, as does the number of perks that can be carried into battle. Finding the right loadout combinations for each world and its specific variety of enemy types is engaging. Matching those to the players playstyle provides a tactical aspect to the game that also makes each run unique.

Crashland takes the wave shooter’s timeless VR trope and fills it with so much style and substance that it feels almost ready to burst. Rather than facing numbered waves of enemies as is traditional for the genre, each world gives the player a timer counting down until salvation arrives. From there, the onslaught of enemies is nothing short of relentless, and there is never a moment where you have time to breathe. I have seldom experienced anything as tense as fighting through the final seconds of a level as impossible numbers of insectoid nasties scramble to take you down.

In addition to the powerups and perks, the player also has boost shots and teleport slots to aid them through the carnage. These additions are limited, with teleports recharged by killing enemies and boost shots gained by collecting the glowing balls dropped randomly by fallen enemies. Careful (often desperate) use of these abilities will often be your saving grace. A well-placed teleport or timely barrage of boost fire can be the only thing saving you from being surrounded or overrun.

The action is quick and intense, and hard. Damn hard. Everything within the game cycle is built towards balancing planning and instinct. Without precision, movement, and careful deployment of powerups, even a momentary lapse in concentration can see the end to the most proficient of gladiators. It’s really, really good.

There be Monsters here

The enemy design in Crashland is quite simply amazing. Rarely am I so impressed by a single feature of a game. Still, in this instance, Crashland has raised the bar so high beyond its nearest competitor that I can’t imagine being impressed again for quite a while. Most games usually offer a dozen enemy types at best, for the most part, empowered riffs on a core three or four. Crashland, on the other hand, delivers fifty of the most diabolical grotesqueries I have encountered in VR. Yes, there are empowered versions as you progress, but they are generally so different in how they need to be dispatched that they feel new.

As you progress through the 24 worlds, each progressive stage reveals several new monstrosities for you to contend with. Make no mistake, these are the things of nightmares. I have played Crashland for six hours at the time of writing, and I have taken the headset off twice because the game got too intense, and I had to nope out. Without any spoilers, there was one level that made me so uncomfortable that if I hadn’t beaten it on my second attempt, I don’t think I would have gone back in for a third.

Some enemies latch on and immobilise you. Some circle you as they hunt in packs. Some enemies interfere with your weaponry, and others that…well, you’ll see. Regardless of where the overall score for Crashland sits, if we had an ‘enemy design’ criteria, I would score it a solid 10. This is the new gold standard, and other dev teams would be well advised to take note.

Crashland succeeds at making the various hostile alien landscapes eerily immersive. The remarkable depth of textures and the different lighting and weather effects all help give the environments a character of their own. I will admit that I am only a little more than halfway through the 24 levels (after playing six hours on casual) at the time of writing this review, so I have no doubt that there are plenty more worlds to come. That said, so far, Crashland has taken me through an impressive range of ecosystems and landscapes which suit the game down to the ground, and I can’t wait to see what else is in store.

The other big visual drawcard is the procedural animation of the enemies. Each creature moves beautifully through the environment, with nuanced animations that give each beastie a definite and often terrifying character of its own. That, plus the fact that each creature has multiple death animations, keeps things fresh long after the initial impact has worn off.

The sound, like every other element of Crashland, is well thought out and equally well delivered. There is no music (for the most part), and that is an absolute blessing. The ambient environmental sounds create an eery sense of foreboding. This is amplified by the relentless bleep of the motion sensor, continually reminding you that there are ever more enemies on their way. The positional audio for a game like Crashland, which throws enemies at you from all sides, needed to be good, and it’s outstanding.

Each alien atrocity has its own unique audio cue to alert you of its presence. Soon, you will be relying on these for your very life. Each time a new enemy is introduced, the learning curve to pick that sound out of the cacophony of combat becomes steeper and, at the same time, more vital. Overall the sound design is a critical component of the experience, as much fused with the actual gameplay as the very act of pulling the trigger. Again, it’s excellent.

By Heather Bradford
In Games

When a new game is released, one of the first questions is, “How long is it?” In the case of Crashland, this really becomes a ‘how long is a piece of string‘ style question. Crashland has 24 worlds to conquer, each roughly between 3-8 minutes, and three difficulty levels to master. So, if you’re an elite gamer, it is conceivable that you could beat it in around 3 hours. However, chances are that this will take you a lot longer to finish for slightly less godlike players.

Also, Crashland is a wave shooter that relies on your enjoyment of the core game mechanics. This means that you could be finished with it in 20 minutes if it’s just not your thing. But, if the mix of intense, fast-paced tactical action does appeal, then you’re in for many hours of fun. There are also online leaderboards, so if you’re competitive, then there’s yet another angle for you to enjoy.

Perhaps it would be better to put it this way…

I have played Crashland for six hours on the casual difficulty setting, and I have only just beaten level 14. Given the difficulty curve, I estimate it will be at least another six hours before I get to the final world. Once I’ve done that, I’ll go back and start score chasing. Will I eventually lose interest? Probably. Will that happen within the first twenty hours of gameplay. Probably not.

One of my only complaints is that the game is only single player. The developer has stated that there is currently no plan to add multiplayer to Crashland. However, I can think of no other game that would be better suited to the addition of a co-op mode. If we could head into battle with a friend, scrambling to survive as a team, risking everything for a desperate revive, then I have no doubt that this would easily become one of my favourite games.

Game over Man! Game Over!

Crashland is a sci-fi wave survival game that innovates within a genre that hasn’t seen innovation in years. It offers a level of depth and nuance to the action that is equal parts terrifying and addictive, and I, for one, love it. Crashland is a simple formula that delivers a lot more than the average shooter. When you find the right balance between fight, flight and some additional might, it really makes you feel like a mighty space gladiator.

I have no doubt that many gamers will remain unimpressed and bypass Crashland purely because of its genre. Those people will sadly miss out on something great. For everybody else, I strongly recommend that you give it a try.

Crashland
TLDR : Summary
I strongly urge those put off by the fact that Crashland is, at heart, a wave shooter, to put their preconceptions aside and try it. Crashland offers the most well-conceived, well-delivered gameplay loop in the genre. That and the incredible enemy design makes it the new gold standard wave shooter.
Concept
8
Gameplay
9
Graphics
8.5
Audio
8.5
Longevity
7.5
User Rating0 Votes
0
Pros
In-depth gameplay loop
Very, very hard
Satisfying skill progression
Fantastic graphics and sound
Cons
Possibly too hard
Lacks any story component
8.5
Intense
Get it on the Oculus Store
Crashland