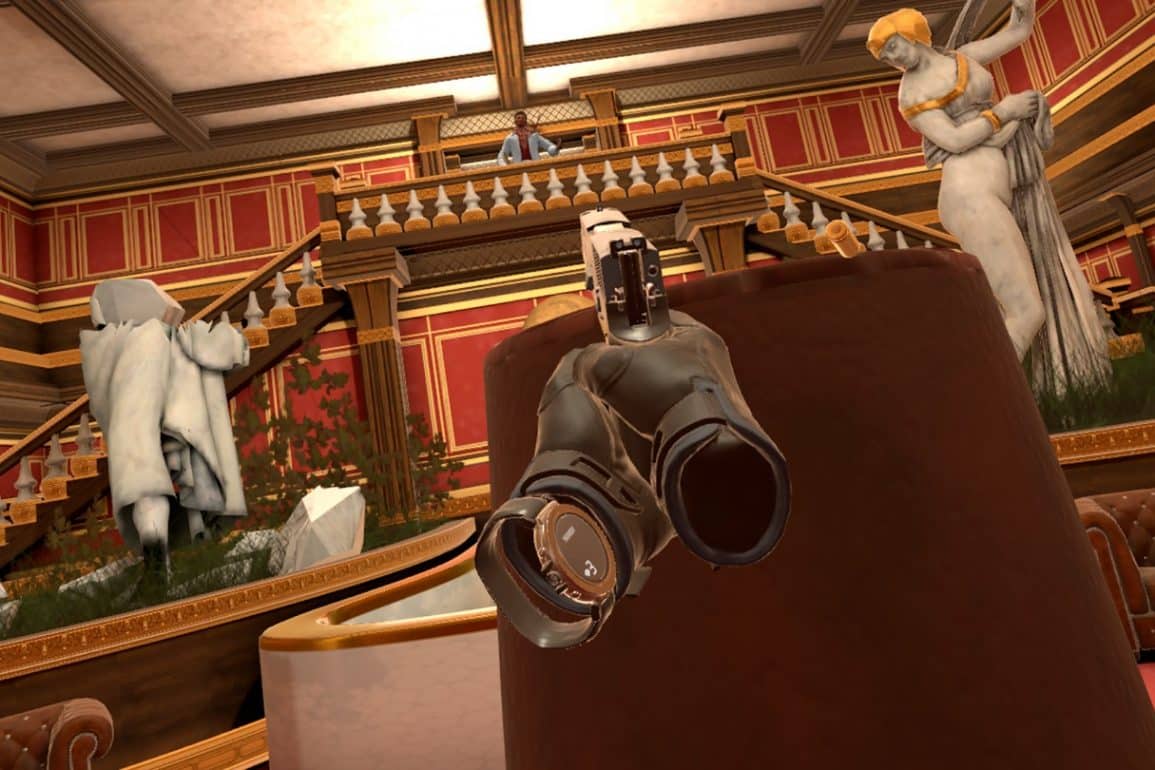 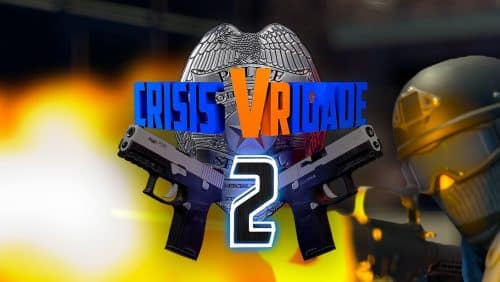 For many, the absence of Crisis VRigade 2’s older sibling from the official Oculus store is one of the great unsolved mysteries of mobile VR. Well, the good news is that Oculus has finally launched their long-promised pseudo storefront, the App Lab! With it comes a whole new way for Quest owners to find new and exciting content. Amongst the launch titles are some mainstays of the SideQuest ecosystem, including both titles in the Crisis VRigade series.

Love it or hate it, we’re going back in for more of the same with the brand new (to Quest) Time Crisis 2 … oh wait, sorry… I mean Crisis VRigade 2. Have developers SumaLab scored a headshot with their sequel and helped cement the App Lab as a legitimate storefront, or will they be found hiding behind a dumpster sobbing into their spent ammunition?

Let’s duck behind that crate and see…

Did you ever play Time Crisis when you were younger? Did you like it? I did.

I spent an exorbitant amount of money in arcades playing Time Crisis as a teenager. I was so hooked that eventually, I bought the PlayStation light gun exclusively to play it when it appeared on home consoles.

Why is that relevant here? Because despite having its own unique character on the surface, Crisis VRigade 2 is essentially the by-product of some smart people asking, “What if we just remade Time Crisis in VR and called it something else?” After the last few days of playing Crisis VRigade 2, all I can say is that if the sweaty, fuzzed-lipped, pubescent version of me mentioned above had played this game, I would probably still be living in my parents’ house playing video games today.

Crisis VRigade 2 essentially delivers the experience of being sucked into a 90’s action movie based on the premise of being sucked into a 90’s arcade game. The format is simple. The developers had the good sense not to try and complicate things by adding anything resembling a story. The player embodies a police officer. Maybe some rogue detective who plays by his own rules or a SWAT leader out to avenge his partner. I’ll let you decide because the game doesn’t bother, so you may as well just pick a trope that makes you feel actiony, and dive in.

Each level sees you tasked with taking down a notorious crime figure of ill repute, who has, of course, put an army of goons in between you and himself. You’ll face Yakuza on one level, Mafia goons on another, and <SPOILER> in the last. It’s pretty simple stuff, but at the end of the day, it serves the tone and intent of the game well. It also allows you to crack on with what you’re really there for… shooting baddies and hiding behind anything that you can, and you know what? It’s really cool!

The gameplay in Crisis VRigade 2 consists of a series of set pieces that see the player placed near some cover spot whilst a veritable horde of goons advance, guns blazing. Each little action vignette positions the player differently relative to the setting and the advancing enemies, requiring different movements to survive. Once you let go and immerse yourself, Crisis VRigade 2 really made me feel like an action hero in the most childishly enjoyable way that I’ve experienced in quite a while.

The game almost begs you to role-play every outlandish scene from the action movies of your childhood. This includes classic scenes like “fire blindly over the top of the desk while pinned down by enemy fire” or “having your back to a concrete pillar while henchmen slowly advance from either side.” It’s great. I haven’t felt this much like a child playing action heroes in decades. I am genuinely surprised by the nostalgic resonance that this game evokes.

Another nice touch is that some environmental elements can be destroyed, whether by your enemies or yourself. This lends an interesting tactical component to the action. Extended cowering behind cover allows enemies to whittle it away to nothing, leaving you nowhere to hide. Similarly, when cornered, you can shoot out strategically positioned sections of whatever you’re hiding behind, allowing you to sneak a few unexpected shots into the fray.

In many games on Quest, closely positioned items are rendered as one object, with your bullets unable to pass between them. This is gloriously not the case in Crisis VRigade 2. The game not only allows you to make these cunningly improbably shots but almost requires you to do so if you’re to have any hope of surviving.

Getting Hard in VR

With so many people having an issue with short-form gaming in VR, developers producing arcade experiences often resort to different ways to extend their games’ length. Alternate game modes are often used to extend the shelf life of a set of mechanics, and although not present yet, SumaLab are planning on doing precisely this with Crisis VRigade 2. The other oft deployed tactic is a perilously escalating difficulty curve. At launch, SumaLab have placed a good many of their eggs in this particular basket.

I’m just going to say it, this game gets hard. Really hard. Well, at least, it does if you want it to. Crisis VRigade 2 comes with 4 difficulty modes that change certain play dynamics to ratchet up the challenge. Play on the easiest setting, and you get some aim assist, helpful warning symbols, and so on. As you progress up the difficulty settings, these are stripped away, and punishing new elements such as limited ammo are introduced. I began my playthrough on the Rookie setting with automatic reload. It still took me about 90 minutes to complete all three levels. With a bit more experience under my belt, I finished the same three levels on the Cadet setting in about the same period. After that, this game gets HARD. Despite continuing for over an hour, I’ve still yet to complete the first level on Veteran, although I can’t wait to get back in and give it another go.

There are various unlockable items that you can purchase (using in-game currency), which will make the going a little easier. There are also some “consumables,” such as extra lives, that can be purchased before entering your run. It’s worth noting that to complete levels beyond the ‘Rookie’ setting, I resorted to buying several extra lives and using the odd ‘continue.’

On that note, the continue feature is also really cool. It costs you a decent amount of your in-game riches, and you’re forced to decide it while a timer counts down at the end of your game. Deciding whether to pony up and continue reminded me of all the hasty value-economics I had to perform as a kid in the arcades.

Crisis VRigade 2 has definitely seen a much-needed graphical upgrade since the first installment and is now quite a nice looking game environment to be in. While not exactly breath-taking, it is crisp, clear, and more than adequate for the genre. The visual style borders on cell-shaded, with heavy black outlines lending a cartoony quality to the proceedings; however, the background environments are a little more grounded in reality. All in all, the art styles fuse together well and really help sell the player on the feeling of living out a 90’s arcade adventure.

The audio is also decent, with satisfying sounds of gunfire surrounding you and positional audio cues alerting you to attackers approaching. There is relatively little voice acting work, but what there is, is decent. Credit goes to whoever “played off-brand Tony Montana” as well as the dry, wisecracking voice that follows you asking things like “have you’ve smoked something from the evidence locker?”

Crisis VRigade 2 is the VR reimagining of the light-gun arcade games of old. In its ambition to emulate that experience, it is a total success. That said, if you didn’t grow up pumping coins into arcade machines, have never seen a Time Crisis machine and dreamed of going inside, or just don’t enjoy the genre, then I doubt that it will have much to offer.

Anyone looking for more robust game mechanics and a longer, story-driven campaign should probably duck for cover and let this one pass by.

With 3 playable levels at launch, 4 difficulty settings, and the promise of 3 additional levels and a time attack mode, Crisis VRigade 2 has enough meat on its bones to give a satisfying arcade experience. There are many other games in this crowded genre, but none of them is quite as engaging, intuitive, and fun as this one. If you only have room for one arcade shooter in your library, then this might just be the one for you.

Crisis VRigade 2
TLDR : Summary
Crisis VRigade 2 is an enjoyable arcade light-gun simulator that is sure to impress fans of the genre. It is simple, shooty fun. It probably won't make it into your all-time favourites list but is definitely worth owning for those times when you just want to jump straight into some action.
Concept
6
Gameplay
8.5
Graphics
7.5
Audio
7
Longevity
7
User Rating0 Votes
0
Pros
Simple, addictive fun
Immersive action sequences
More levels to come
Cons
Insane difficulty curve
Limited appeal outside of genre enthusiasts
Only 3 levels at present
7.5
Nostalgic
Get it from the Oculus App Lab
Crisis VRigade 2