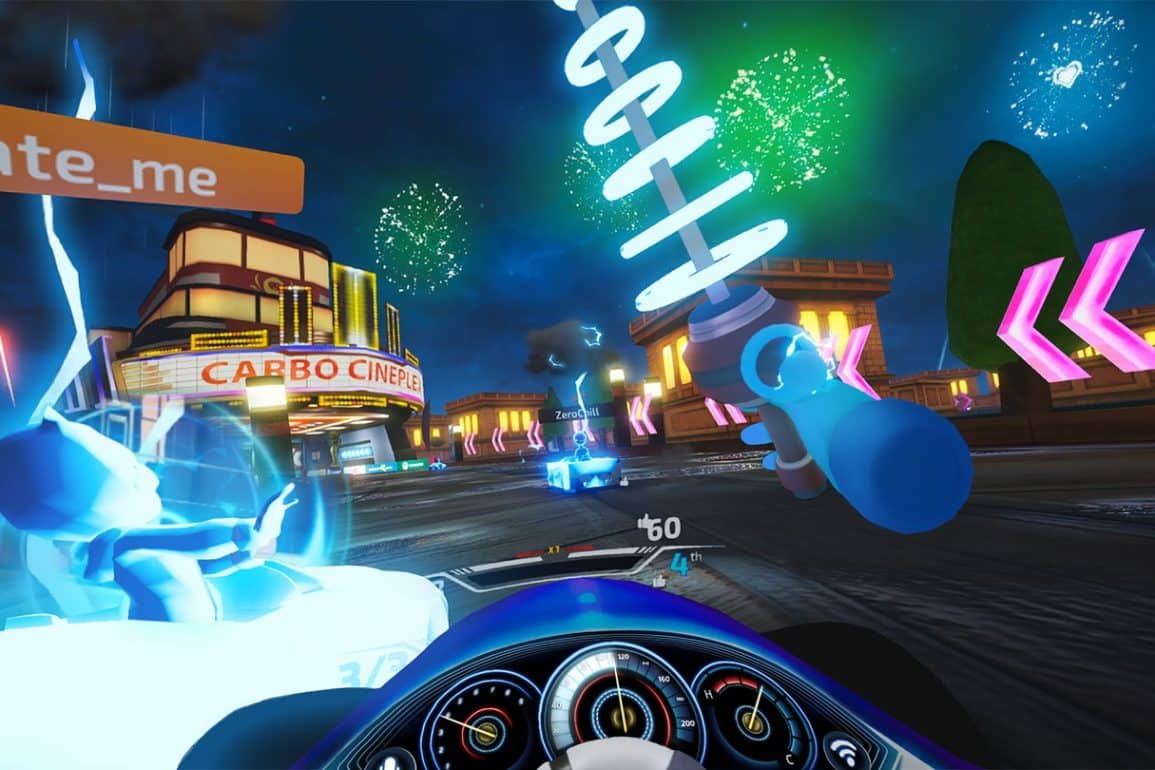 Is This Mario Kart for Quest? The Stomach Knows.. 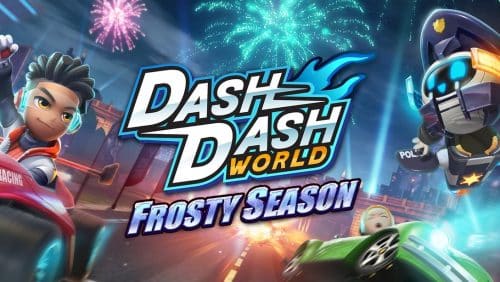 I should probably start by acknowledging that we are late to the party reviewing Dash Dash World, despite previewing it when it was still in beta. Following the lengthy beta testing period, Dash Dash World released onto the Quest store back in October 2020. It has subsequently become one of its most regularly updated titles. Now, with version 2.0 recently released, it seems as good a time as any to take this plucky kart racer for a test drive.

So rev up your engines as we find out if this comical kart racer will take pole position in your library, or spin out of control at the final turn and leave you vomiting into a bucket of your own shame.

In this reviewer’s opinion, it may well be both…

Dash Dash World is a go-kart racing game set in a world of seizure-inducing colour and Japanese style wackiness. The tracks have a quirky and fun style of their own but pay homage to the seminal Nintendo title that it seeks to emulate. We don’t get Rainbow Road, but we do get a stretch of brightly pastel squares that aren’t exactly trying to hide their influences.

You pilot your kart at breakneck speeds around an assortment of zany tracks, picking up weapons and other useful powerups as you go. There is an array of game modes, from a single-player career progression to a full multiplayer Grand Prix. Still, essentially the core gameplay stays the same. Drive fast, avoid the giant llamas and shoot eggs directly from your chicken gun at anyone who dares to overtake you.

Dash Dash World is a light-hearted extravaganza of a racing game. Each of the 11 courses offers a highly stylised circuit to race around strewn with unique obstacles and an assortment of powerups. The controls are intuitive and easy to use, allowing even first race beginners to see a winning run not too far in the distance. As you familiarise yourself with the mechanics, the subtleties and nuances begin to stand out, and the fun starts to deepen. Within no time, you’ll find yourself feeling like some kind of anime racing God as you begin to navigate the courses with merciless precision.

The drift mechanics are particularly excellent. The thrill of accurately judging the line of a corner and drifting the whole way around is one of the most satisfying elements of the game. Additionally, drifting charges up your boost meter, which gives you an added incentive to use the mechanic. It really is fun. Taking a long drift through a turn only to boost out into the straight is one of the coolest elements of playing Dash Dash World, and worth playing just for the sensation.

The controls are fully customisable, but the default set up is more than adequate. The only real question here is whether to play immersive or stick, although both options proved just as viable as the other. The “Stick” method utilises the thumbstick for steering. It is an entirely serviceable system if lacking the depth of experience that one would hope for from a VR title. The “Immersive” option allows you to put your virtual hand on the wheel and actually “drive” the kart with one hand while fending off foes with the other. As far as I’m concerned should be the standard mode in pretty much any VR racer. The only downside to this control scheme is that an ache can start to creep into the shoulder after a while, but such is the price one pays to be a top athlete.

From comfort options to in-game controls, from avatars to karts, there are a fantastic amount of custom options available in Dash Dash World. For a game in which all replayability is based on players enjoying the core mechanics, this gives a much-needed incentive to keep going.

While I found Dash Dash World to be a completely compelling title in the single-player mode it should be noted that there is also an active online community. I tried the multiplayer mode at various times and never struggled to find a match. What’s more, I found the people that I encountered to be generally respectful and overall, far less “squeaky” than one might expect from a cartoon racer. It’s also really easy to add people and party up with your contacts, so there is plenty of fun to be had competing with friends. This could be over a single race or an entire Grand Prix series. For many, the competitive and social aspects of Dash Dash World will no doubt be the features that keep them coming back.

The Fast and the Slightly Agitated

As you race around the variety of treacherous tracks, you collect mystery item boxes (hey Mario Kart, mind if I borrow that?). These equip you with whacky weapons and boosters, all designed to give you the edge over your opponents. They range from eggs which obscure your victims’ view and honey bombs that slow racers down to novelty teeth that prevent enemies from using their own devices and everything in between. Each of these items appears at the side of your cockpit, and you can store up to two different items. They’re activated by reaching out, grabbing them and physically throwing or shooting them. This immersive component should be a significant advantage over the Dash Dash World‘s flat-screen counterparts. But for some reason, it just isn’t. Don’t get me wrong, it’s functional and kind of cool, but the truth is that using the weapons is the most underwhelming part of the Dash Dash World formula.

Whilst each individual weapon serves a unique purpose, none of them really seemed that useful or exciting. I remember the joy I used to experience so vividly when I would get the red shell in Mario Kart, knowing full well that it would probably be my key to victory. Dash Dash World undoubtedly offers a comprehensive arsenal, but there’s just nothing in there that has that same ring of satisfaction. This is even more noticeable when compared to Mini Motor Racing X where there are fewer weapons, but they feel far more impactful. I found that I barely used my weapons in most races, focusing instead on the drift and boost combo and only resorting to the weapons as an afterthought.

Things that make you go Vroom

Dash Dash World is a good-looking game that utilises a heavily stylised cartoon motif throughout. It is excellent in the context of this game. Each of the games 11 tracks are uniquely themed, transporting you from a traditional racetrack to a course inspired by a Japanese garden and on to a fluorescent Day of the Dead style piece of Mexicana. There are also “extreme” tracks which twist and loop impossibly and seem to be made with the sole purpose of making you want to pass out. Each of the tracks is bright, vivid and seemingly made with the sole unifying premise “imagine if a rainbow threw up”. I, for one, like it.

At times, the graphics seemed wasted as the player is too focused on following the line of the track to take in the vistas. There were also other times, usually during incredibly winding stretches where it felt like the devs were counting on that fact and really didn’t put much effort in at all.

That is a very minor criticism though. All in all, the game does look good and artfully achieves the desired effect of making you feel like you’ve stepped into a cartoon racer.

Into the Radius | Review

The audio components are not quite as good, although not by much. The music and sound effects are appropriate but don’t really stretch the imagination. The bleeps and bloops that indicate one whacky weapon or another being fired tend to mash together with the non-descript video game music and the engines’ pervading hum. It all results in a generally muddy soundscape. It doesn’t detract from the game, but I don’t think it adds as much as could have.

The spatial audio felt quite lacking, and I struggled to get a sense of where players were relative to my own kart, or from which direction some projectile was approaching. This is a real missed opportunity as there is no rear-view mirror, and turning around to check over your shoulder is a quick recipe for motion sickness. It would have been brilliant if you could hear an opponent approaching and pinpoint their position. I would have loved to have levelled a solid whack with the frying pan without looking, basing my aim on sound alone.

There is another reason that the good folk at 6dofreviews have not yet covered this popular Mario Kart clone, and it’s probably worth mentioning. We have struggled to find someone with the VR legs (or more aptly, stomach) for it. Despite the writers’ lounge being peopled by the VR equivalent of grizzled, cigar-chewing war veterans, Dash Dash World has taken a few of us to our limits of acceptable discomfort.

Dash Dash World clearly understands this challenge and throws almost every conceivable comfort option into the mix, however it can still be a bit of a hard slog. Just for context, I have spent hours barrel rolling my way through Star Wars Squadrons and backflipping through the dance of death that is Sairento VR: Untethered. Still, Dash Dash World is in another league. Mini Motor Racing X went as far as adding a third-person view for those who struggled, and that feature alone would have saved it from countless refunds. I can’t help but feel that Dash Dash World would have benefitted from adding something similar.

To finish this review, I had to play in short bursts, managing about 30 minutes per session before needing to take a break, despite taking advantage of the lavish swathe of in-game comfort options.

Dash Dash World is a fast-paced, action-packed kart racer that will provide hours’ worth of entertainment for those who can handle it. The core gameplay is the epitome of easy to learn, hard to master (owing mainly to its familiar heritage). It provides a nuanced and enjoyable racing experience that is quite simply fun to play.

With intuitive controls, a range of tracks and games modes and a thriving multiplayer scene, Dash Dash World comes close to brilliance. However, due to a few niggling issues and a penchant for inducing nausea, it just doesn’t quite manage to capture the magic of the Nintendo classic that served as inspiration.

Dash Dash World
TLDR : Summary
For those who can stomach the movement, Dash Dash World offers a fast, fun experience that will fill a niche in just about any Quest library. The variety of tracks and great multiplayer scene justify the price of admission. Still, the underwhelming weapons and the severe threat of motion sickness stop it from achieving greatness.
Concept
7
Gameplay
7.5
Graphics
7.5
Audio
7
Longevity
7.5
User Rating0 Votes
0
Pros
Fun, fluid controls and gameplay
Great range of tracks, modes and options
Strong multiplayer scene
Cons
High likelihood of motion sickness
Weapons are a bit lackluster
Grind for custom items is annoying
7.5
Sick
Get it on the Oculus Store
Dash Dash World