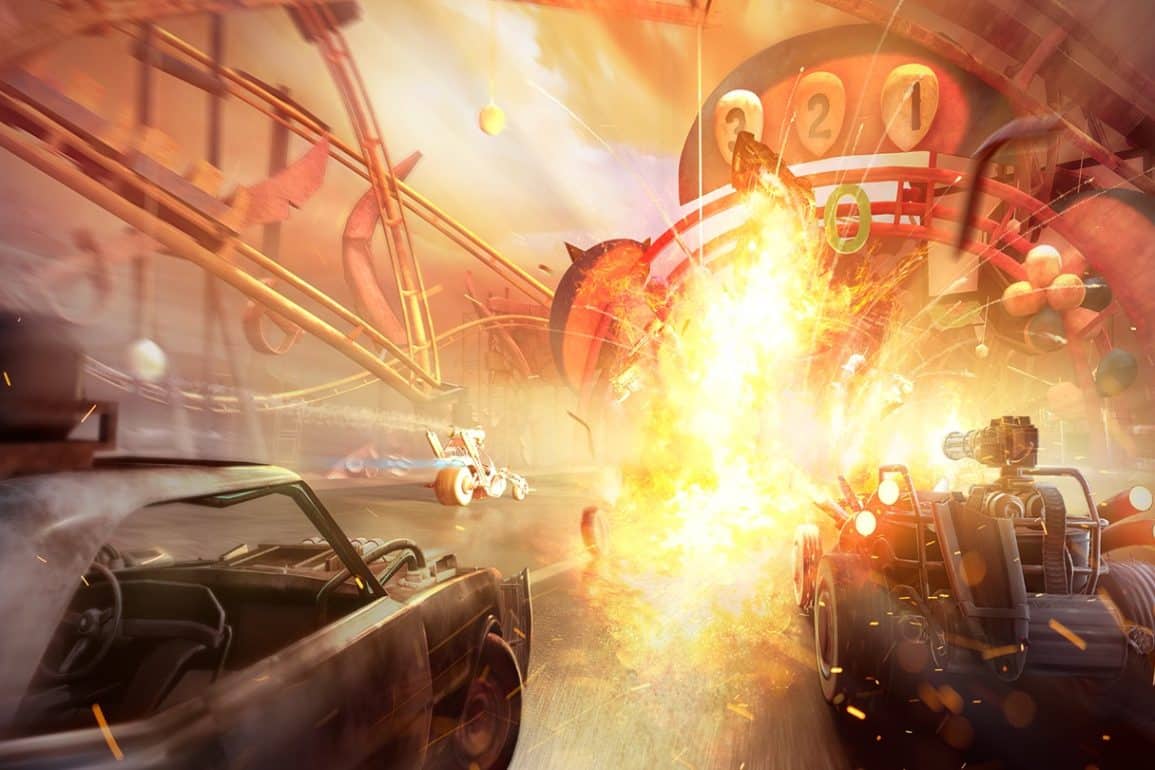 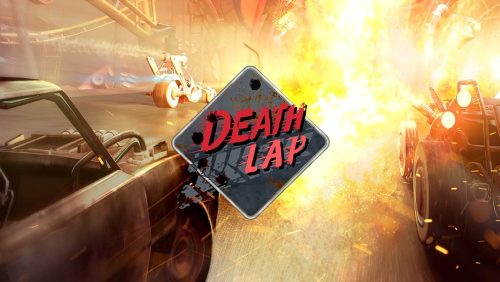 Think Mario Kart lacks teeth? Ever wish it had barbed wire and fiery skulls instead of banana peels and red shells? If you’re looking for a Twisted Metal-style car combat game made just for VR, you’ll find a decent demolition derby in Death Lap. In addition to the familiar kart racing mechanics like three laps per race, massive jumps, randomized bonuses, and drift-to-boost, Death Lap adds a military-grade arsenal of machine guns, rockets, and other nasty surprises.

On your way to the finish line, you’ll be able to blast other racers into smithereens— only to see them respawn moments later and return the favor. Death never lasts too long in Death Lap— just a few short seconds, which is enough to give up the lead and leave you shaking your virtual fist.

It’s an impressive technical feat that Death Lap looks consistently good while also being a very smooth ride. The racing is fast and relentless, with only a few glitches and some blurry textures on the track. If you play seated in first-person mode (my preferred method), you can look around and admire your vehicle’s interior with a fixed smile on your face.

To mitigate any discomfort you might get from the rapid-fire visuals and intense gameplay, Death Lap provides a few essential camera settings. By easing up on the camera lock, you won’t get spun around with every impact. Turning up the intensity in the settings means you’ll shake and spin more often, which is a little more difficult to stomach.

Since the rounds are so short, and death itself is just momentary, Death Lap accelerates quickly into a high-octane rush. It’s fortunate that just beneath the surface, amid the explosions and chaos, is some genuinely challenging strategy.

Each of your five vehicles contains multiple weapons, from short-range (spiked wheels, or a giant claw) to long-range (rockets, lasers, and machine guns). Holding the brakes and gas while you turn results in drifting, which will recharge your boost meter. You’ll also have to manage a retractable shield and a special attack, like oil slicks.

Steering is accomplished with either the joystick or by tilting your left hand, keeping your right hand free for aiming and shooting. It can become a little overwhelming, but even if you just focus on the basics of steering and shooting, Death Lap is immediately gratifying. Later on, you’ll need all of these skills when you face human opponents online.

Your host for Death Lap’s fatal festivities is Nitro Saint Payne, a goofy Wasteland Weekend-style figure dressed in a leopard-spotted duster jacket. Nitro appears at the start of the game in full-motion video, then introduces each track’s theme and also provides some enjoyable color commentary during the action. He’s a fun character, but Death Lap could benefit from more bizarre personalities and a storyline tying the whole thing together. It’s just enough of a set-up to intrigue you at first, but the over-the-top acting never really leads to a thoughtful narrative.

The tracks themselves are a lot of fun, while also being moderately compact. From a generic desert landscape to a trap-filled Las Vegas Strip, Death Lap’s levels are well-balanced and contain numerous shortcuts. You’ll grit your teeth as you sail through the air or drift tensely around curves. It’s only too bad there are just six of them, and you can play through all of the environments in just half an hour.

You might be thinking— that’s it? Not much story, and six short levels? Well, because Death Lap is so immediately gratifying in terms of its nonstop explosions, and the game is hiding a deeper, more complex racing system under the hood, it’s a blast to play online against real opponents. Using your microphone to taunt or congratulate other players, while you aggressively jockey for position and the best power-ups, is an excellent use of the Oculus Quest’s hardware.

Unfortunately, online matchmaking seems to be limited to random opponents, so you can’t challenge specific friends or form groups. Hopefully, this will be corrected in a future update.

Though there is certainly room for improvement in the narrative and number of levels, Death Lap gets all the racing and combat basics precisely right, and then some. For fast, aggressive multiplayer action, it’s hard to find another game on Oculus Quest that comes close. It’s incredibly stylish, with a variety of control and camera options that work well with the hardware.

If you can appreciate the combination of a post-apocalyptic world with a moderately complex vehicle/combat simulator, give Death Lap a download. It’s fun in short bursts, highly competitive in online multiplayer, and may even give you an advantage in the upcoming real-life vehicular Guzzolene Wars.

Death Lap
TLDR : Summary
Though there is room for improvement in the narrative and number of levels, Death Lap gets all the racing and combat basics precisely right, and then some.
Concept
8
Gameplay
8.5
Graphics
8.5
Audio
7
Longevity
8.5
User Rating4 Votes
8.2
Pros
Tongue-in-cheek take on the post-apocalyptic genre
Surprisingly deep racing and shooting mechanics
Fast-paced online multiplayer
Cons
Limited number of brief tracks
Could use more characters and story
8
Vrooom!