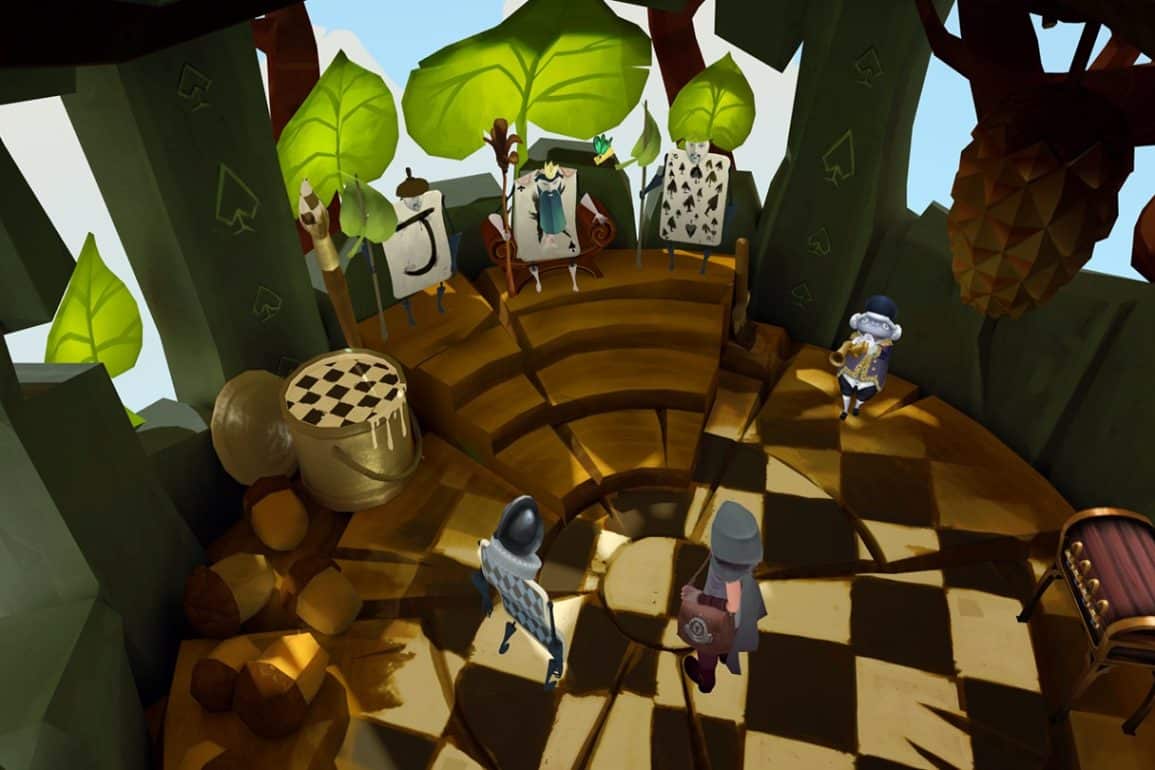 Down The Rabbit Hole | Review 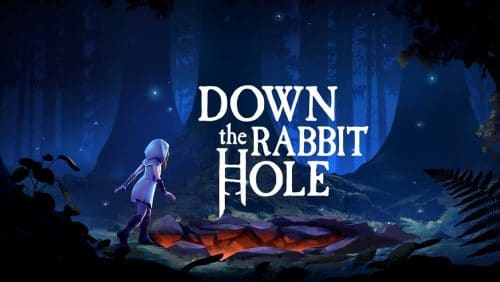 When Charles Lutwidge Dodgson wrote Alice’s Adventures in Wonderland, it’s unlikely that he could’ve expected just how great an influence it would continue to exert on popular culture more than 150 years after it was published. Yet here we are, with more than 30 film adaptations of the story, and at least ten video game adaptations, going back to Windham Classics’ 1985 graphic adventure, released for the Apple II and Commodore 64. Dodgson’s imagination gave birth to a world as wild as it is popular, and his world has now come to Virtual Reality through Cortopia’s new game for the Oculus Quest, Down the Rabbit Hole.

Shortly after the game begins, our protagonist (not Alice, since this game is set before Alice in Wonderland) finds herself falling down the eponymous rabbit hole, her long fall broken only by the neat stacks of invitations on which she lands. As she lands, they explode all around her and disappear in a puff of smoke. The girl discovers that the invitations have been scattered throughout Wonderland. She also finds out that her cat, Patches, has been taken by the Queen. To have any chance of rescuing Patches, the girl must distract the Queen, and what better way than to do so during the party, and, of course, the more guests attend, the greater your chances of success.

Your mission, then, as you guide the girl through the game, is to retrieve all the invitations.

Down the Rabbit Hole has a unique look to it, and it’s quite lovely. You’re in the middle of a 360-degree diorama. It’s beautiful to look at and vividly colorful. You can move it around by grabbing tree trunks, and you can rotate it by grabbing two of them with both hands at the same time. Your joystick controls the girl’s movements, and you can press the A button to have her perform some basic actions. Much like the ‘click’ in point-and-click adventure games, the click is contextual. Sometimes it’ll open things, and sometimes it’ll take you up and down ladders. Sooner or later, you’ll run into the hookah-smoking Caterpillar, and his chamber contains various mirrors that act as portals to the different areas of the game. In effect, his cave functions as a hub for the game world.

The actual gameplay in Down the Rabbit Hole is a mix of exploration and puzzle-solving. The puzzles aren’t particularly challenging, and this might indicate that the game has a younger audience in mind. Some invitations you find by solving puzzles, and some you find in various combination-locked chests. Some are strewn about randomly within the scenery and must be nudged by the player before they land where the girl can pick them up. More annoyingly, however, some invitations can only be retrieved by rummaging through the landscape with your hands until you destroy some rocks, for instance, and then find an invitation underneath them. These, I found annoying since their discovery didn’t involve any logic as much as it did me flailing my hands randomly within some locations. Sure, it fits with the premise of the game, but it felt unfair, as though they were there merely to prolong the game’s playtime.

You Just Had Some Kind of Mushroom

As I mentioned above, Down the Rabbit Hole is very attractive. The graphics are cute, colorful, and at times, beautiful. The soundtrack is also pleasant, lending a nicely relaxed but quirky atmosphere to the proceedings. Some of the levels manage to invoke a little bit of M.C. Escher, and one level featuring teacups, clouds, and a lake is particularly notable. The general presentation of the game is excellent.

If you’re an adult who’s not a big Carroll fan and are looking for the next great puzzler on Quest, Down the Rabbit Hole is a tricky title to recommend. You’re likely to be initially impressed with how beautiful the game is, but eventually disappointed with how little it brings to the table. There aren’t that many actual puzzles, and the ones that are there are relatively simple. The fact that the game is all about finding invitations makes it feel as though its beauty is designed to distract you from noticing that it’s a bit of a chore.

For Quest owners who are also fans of Lewis Carroll’s books, however, Down the Rabbit Hole, despite its shortcomings, is unmissable. You get to move the girl around. You get to meet some of the book’s most memorable characters. You get to grow as big as a house (and if you consider that a spoiler, just how much of a fan are you, really?) and you get to befriend a playing card. You get to visit the Queen’s castle and meet her very hungry, very idiotic husband. You get to meet the Caterpillar and watch him talk crap. In certain situations, the game shifts from the diorama view to a first-person perspective in which you become the girl herself. You meet butterflies and birds and hear playing cards argue amongst themselves. For children, as well as for fans of the books, these will all be joyful moments.

Anywhere Without a Porpoise

I had a good, but brief time with Down the Rabbit Hole. The game certainly takes less time to complete than more ambitious puzzlers like Red Matter, or The Room VR: A Dark Matter. Then again, I think the target audience is very different. Whereas The Room VR targets adults and isn’t afraid to get creepy and, in fact, downright Lovecraftian, Down the Rabbit Hole is much more light-hearted and is far more child-friendly, and might best be compared to something like A Fisherman’s Tale. It could use a few more puzzles and a lengthier playtime, and the puzzles could be considerably more challenging without making them inaccessible to children.

Down the Rabbit Hole
TLDR : Summary
Down the Rabbit Hole is an attractive game and a must-have for fans of the books. It’s a game that most children will enjoy, but the puzzles aren’t diverse enough or challenging enough for players looking for a real challenge.
Concept
8
Gameplay
6.5
Graphics
8
Audio
7
Longevity
4
User Rating0 Votes
0
Pros
Beautiful 360-degree diorama
A feast for Carroll fans
Good sound and voice acting
Cons
Not enough puzzles
Puzzles are too easy
Invitation collection can be a chore
7
Tricky
Down the Rabbit Hole
Get it from the Oculus Store