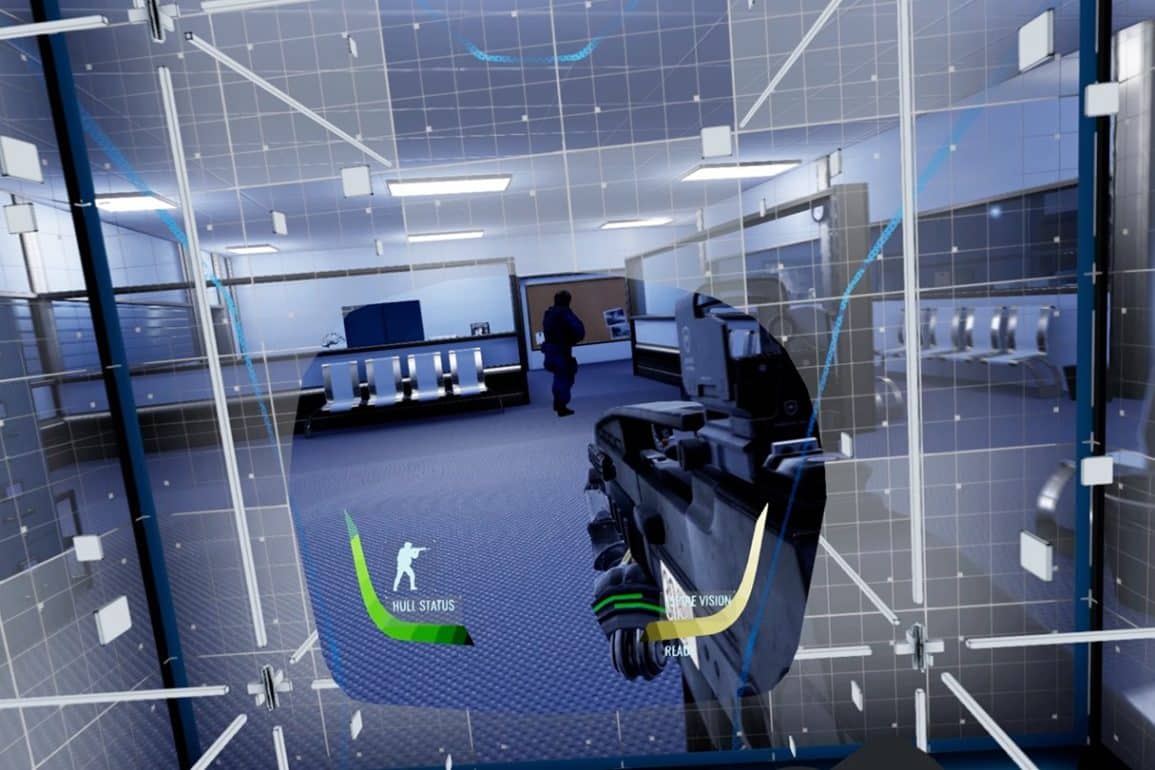 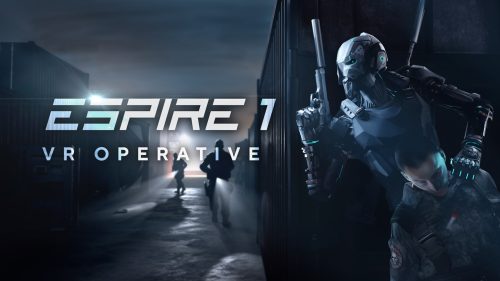 Espire 1: VR Operative must be one of the most anticipated titles announced for any VR platform. For the Quest, it a primary reason that many people bought the system, myself included. VR is crying out for some tactical stealth action. It’s also the perfect medium for the hybrid of GoldenEye, Splinter Cell and Metal Gear Solid that Espire 1 was promising to be. When it missed its intended release date in September, the Quest community became a seething mass of angst. ‘Relax’, the more sanguine amongst us appealed to the troubled throng. ‘We’d rather it be delayed and fulfil its promise than be a letdown’. Well… It’s out now.

One of the main appeals of the stealth-action genre is the sense of immersion, even in traditional pancake games. The desperate tension of crouching behind a crate, waiting for a guard to walk past, hoping you’ll have the chance to take him out before he alerts others… Marvellous. There are superb examples of stealth gaming in VR on Steam – Unknightly and Budget Cuts are both stunning, and offer the sort of experience I’ve just described. In VR, that tense immersion is increased a thousandfold, as you physically crouch behind boxes and aim for those headshots. Espire 1 wants you to feel those things too but seems to fundamentally misunderstand what makes all the games it’s emulating so great.

The first and most glaring misstep it makes is, sadly, the actual core conceit of the game. The player character is not physically present in the levels themselves. Instead, he is remotely interfacing with stealth action robot frames (or ‘ubermarionettes‘ as the game would have it, chortle..) via VR.

The devs have made much of this ‘virtual theatre’ system, enabling people who suffer from VR sickness to customise the interface. This way, the in-game view appears to be little more than a 3D overlay on top of a static room. All of these aids can, of course, be switched off for more immersion, but the entire story and setting of the game goes out of its way to remind you that you aren’t ‘there’. Some terrorists have broken into the facility where the Espire units are made, and it’s up to the player to control a hacked unit and take them out. It’s a terrible idea that completely works against the nature of immersion in a stealthy setting. There’s no thrill in the scenario at all. It’s such a low-stake premise to start with that, even if the rest of the game were a rock-solid, well-designed take on the genre, it would take a while to regain its footing. But it isn’t, so the game stumbles from its first hurdle onwards and keeps on tripping over itself, and it’s heartbreaking.

THE SPIES WHO BUGGED ME

I don’t know about you, but the one bit of stealth action games I can do without is constant chatter. There you are, trying to sneak up on a guy, about to consign him to oblivion, when, suddenly, the Codec/earpiece/communicator cuts in. Basil Exposition from British Intelligence decides to bend your ear for half an hour about what it is you’re doing, what’s going on elsewhere. Perhaps he’ll spout some bullshit quasi-philosophy. Well, Espire 1 thinks everyone loves that, so puts more of it in, but without any of the panache or weirdness of the likes of Hideo Kojima. Or even Michael Bay.

There are no fewer than four irritating voices in your ears while you are trying to stealth it up. They sound so bored and boring that it’s a bit like listening to a recording of a staff meeting at full volume. There’s a tech support guy with the name of Englebert Dechter (who is, yep, you guessed it – Northern Irish), who just sounds like he’s waiting to get off work at a call centre. There’s your boss, as well as some other person who is utterly surplus to requirements but is always sticking her oar in. Then, of course, there’s the ‘quirky’ Japanese-sounding system voice of the ubermarionette (tee-hee!). I think they wanted this to be weird and endearing like the HEV voice in Half-Life, but it’s not only narratively nonsensical, its also just really badly done.

DO YOU EXPECT ME TO TALK?

I can’t express how irksome and constant all the voices are – and they always lower the stakes even further. In one particularly aggravating sequence, just as you’re getting your bearings with the game’s systems, your ‘ubermarionette’ (guffaw) gets hacked so you can’t use your trigger finger. Meaning the devs want you to use your fists for the next bit. Again, the endless inanity of the radio chatter makes this sound like a call to a tech support line rather than an urgent hand-to-hand struggle for survival. One of the voices says something as crass as ‘just as we’ve got it back up and running they go and mess with it, it’s so irritating’… Again, low stakes tossery of the worst kind. There’s nothing on the ‘ubermarionette’ (snigger) to suggest the trigger finger doesn’t work through this sequence. The fingers on your virtual virtual hands flex and tighten as usual, so it just seems like an afterthought, like so much else in the game.

FROM RUSSIA WITH BUGS

Attacking the game’s design might be a moot, point, though, given that the systems are so badly broken that it makes any kind of measured approach a waste of time.

The AI in a stealth game doesn’t have to be amazing, it just has to be convincing and consistent. The schizophrenic idiots of Espire 1 are neither. Sometimes they spot you from across the level and raise the alarm. Usually, the guards will surrender if you approach them from behind, whether you’ve said ‘freeze’ or not, which is for the best as the voice commands usually don’t work anyway. Sometimes the guards face the wall in the middle of a firefight, and you can just walk past them. I regularly had them call off a search for me whilst I was shooting them in the face. It’s so abysmal that it’s almost impossible to list all the bugs, errors and poor design choices here.

Unlockable abilities, like the now well-worn scan/detective vision mode, are introduced gradually through the levels. Yet, they have such a short battery life and long cooldown that you just stand there like a lemon waiting for them to recharge before you can progress. It’s shoddy work that feels like there hasn’t actually been a decent design document for the game. It feels more like a jumble of ideas that no-one has seen fit to cohere into a solid vision.

Worst of all, however, is that the player is so overpowered that stealth is nearly always the worst gameplay option. The baddies fall easily and drop guns with plentiful ammunition. The alarms happen so arbitrarily (because the game is so broken) that you’ll shrug them off and start firing – if the guards notice you at all. The worst thing about being in a firefight and getting shot is one of three voices constantly nagging you that your ubermarionette (hahaha) is damaged and that you should find a quiet spot and heal yourself.

I haven’t played the Steam version of the game, but on Quest, it’s bland-looking at best. The menus look like abysmal low-resolution placeholders. Their childish icons and primary colours that really make it feel like you might be infiltrating a Tomy factory rather than a top-secret installation. The setting itself is so generic that it could be anywhere or anything; there’s a bit of low-key cribbing off the N64’s GoldenEye, but nothing you won’t have seen a thousand times before. In one room and one room only there’s an out of place texture of some rubbish and a soda can on the floor. This seems arbitrary until a few rooms later when Dechter exclaims ‘look at the state of the place’, which is pristine. Another corner cut.

Graphics aren’t even decent enough to be solid and bland – you’ll see a lot of clipped and muddy textures and more glitches than can be counted.

WHAT WAS THAT NOISE?

The sound, apart from the dreary voice work, is completely generic and forgettable. One curious design decision is to make the walking sound of the supposedly stealth-based ubermarionette (snicker) a weird rattly jiggling noise, a bit like its made of dry pasta and string. It’s… Not good.

Espire 1: VR Operative really wants to be compared to GoldenEye, but turns up to the stealth party half cut, wearing clown shoes and flashing LED glasses.

If Espire 1 is in this state and deemed fit for full-price release, I can’t even imagine what it must have been like when they decided to delay it. Even if the next few months were spent patching out the clear problems with the engine itself, there’s nothing of note about the game at all beyond its asinine writing and execution. It was perhaps bound not to be able to live up to the hype, but this is poor beyond all comprehension.

[Editors Note: Due to the many bugs present in Espire 1 when it was released, we postponed working on the review until the first patch was released to give it a decent chance. Due to some circumstances on our part, two more updates were released by the time this review was completed, both of which were taken into consideration when reviewing the game. For update release notes, check out the Tripwire Forums.]

Espire 1: VR Operative
TLDR : Summary
A fundamentally flawed, inept and disappointing effort which is an illogical chore to play, with a story that manages to both be beyond bland and invasive at the same time.
Concept
2.5
Gameplay
2
Graphics
5.5
Audio
2.5
Longevity
5
User Rating7 Votes
4.8
Pros
The first stealth game on the Quest
Cons
The worst stealth game on the Quest
Terrible execution
Crap writing
3
Inept