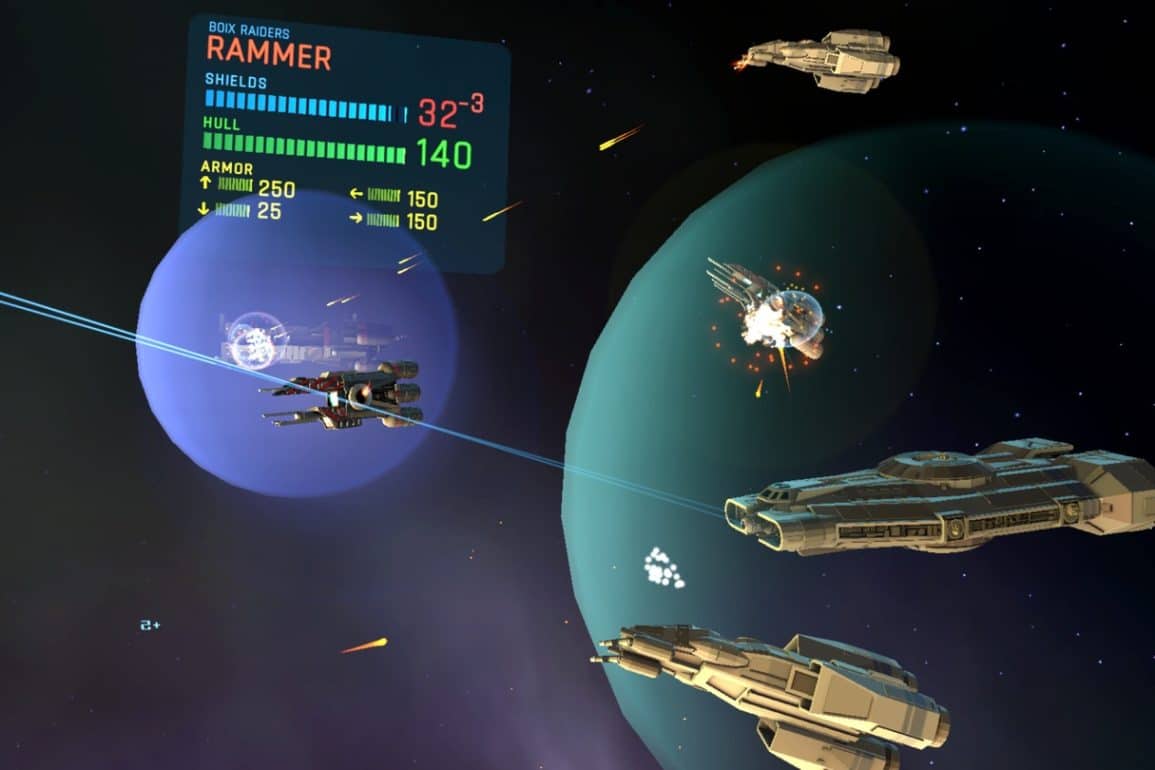 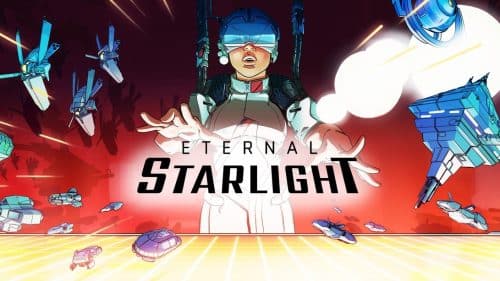 There is an absolute absence of Real-Time Strategy games in the Quest library, a fact which Eternal Starlight has travelled light years to remedy. Eternal Starlight aims at a new frontier of mobile VR gaming, offering a unique blend of RTS gameplay ensconced within the roguelike permadeath loop. Will Eternal Starlight go boldly where no Quest game has gone before, or will it leave us all waiting for the Next Generation? Set your phasers to stun, it’s time to find out…

Eternal Starlight of the Spotless Mind

Eternal Starlight is a space-themed strategy game that sees the player attempt to defend mankind’s claim to Proxima, a planet representing our last hope of survival. The story details humanity’s inevitable destruction of Earth and our equally inevitable pilgrimage into the stars to find a new home. Enter Proxima. Of course, we are not alone in our desire for this life-sustaining planet, and the warlike Kraya are hell-bent on clearing the “Terran scum” out of the region.

The crux of the campaign essentially sees the player embarking on a series of micro missions, attempting to build resources and alliances that will help in the next looming confrontation with the Kraya. The player is free to choose which of the randomly generated missions to pursue based on the resources, items, and potential alliances to be earned. Thus, these missions are more like combat vignettes than actual missions. Most of them are over in an anti-climactically short time. Once complete, resources can then be spent on upgrading your flagship vessel or purchasing auxiliary vessels to bolster your armada.

But be careful – because defeat comes at a high cost.

The gameplay in Eternal Starlight sees the player take control of an initially tiny fleet consisting of your main flagship vessel and a small fighter. You control these ships by grabbing them and tracing the path you would like them to fly or highlighting the enemy craft you want them to attack. It’s reasonably intuitive, and for anyone who has played the outstanding Final Assault will come very naturally.

Both the pace and the game’s scale can be manipulated to suit the players’ needs throughout the battle. At any given point, you can slow the action down to strategise and then put some manoeuvres into action. Also, using simple gestures, you can expand and contract the scale of the battle to allow you a tactile degree of control over your vantage point throughout the combat. While this sounds great in theory, the implementation is sadly lacking in Eternal Starlight.

The speed with which crafts traverse the expanse of space during combat is far too quick to allow for any effective use of the zoomed-in viewpoint. The exception to this is when you’re targeting specific enemy systems. Although cool in theory, this feature can only be manipulated through a cumbersome process; slowing time, zooming in and selecting the target ship, then targeting the desired system, then expanding back out to a scale that allows some level of tactical control. Unfortunately, this process is required every time you want to target specific systems. On paper, the system seems great, but in practice, it just adds a tedious stop/start component that makes combat feels stilted and swiftly becomes a chore.

Similarly, the controls for this world-shifting are missing one of the most obviously necessary functions. That is, to be able to rotate the world around you. Unlike the excellent control system employed by Demeo, which allows the camera to effortlessly and intuitively be turned around the horizontal plane, Eternal Starlight offers no such mechanism. To shift your view along this axis, you need to physically move in virtual space or use the thumbsticks to spin the world in a broad and disorienting arc.

Given that the perfect model for this system exists elsewhere in numerous incarnations, it is frustrating, bordering on unforgivable, to have it so poorly implemented here.

Like all good roguelikes, Eternal Starlight builds tension by employing the ever-present threat of permadeath. That’s right, fail the mission, and you can lick your wounds and try again, but lose your flagship, and it’s “game over man!”. Now I’m generally I pretty big fan of roguelikes, but there’s something about it that just doesn’t work in Eternal Starlight.

But I’ll get to that later…

Eternal Starlight also has a Skirmish mode available, which allows the player to create custom battles from all the unlocked craft available. Utilising a point system, the player can face off against a fleet of up to six ships. This is, quite frankly, the most enjoyable part of the game. Once some of the more interesting ships have been unlocked, this mode provides a proving ground for your tactical proficiency and offers some higher intensity action. Had the rest of the missions felt a bit more like Skirmish, then this review may well have gone a little differently.

Eternal Starlight has a deep and varied progression system that could have made it a real star had a few alternative design choices been made. There are multiple branching tech upgrades, allowing you to either enhance a single vessel or purchase an armada of smaller vessels. The options are wide-ranging and interesting and, when deployed correctly, add a decent amount of tactical depth to the gameplay. In addition, there is a range of specialisations within each tech branch, each randomly generated for the current playthrough. This variety ensures that no two runs are the same and forces you to adopt a somewhat different strategy every time you play.

Each of your main ships can be upgraded with specific modifiers, additional weapons and weapons slots, as well as fantastic new special abilities. The combination of these elements will change the way you approach missions significantly. This means that each run can be played repeatedly thanks to the procedural generation of missions, rewards, and perks. Again, this sounds great in theory; however…

The rewards gained throughout each run are so miserly that it becomes either tedious or impossible to draw out the best elements of the game. Additionally, given that there is little lasting benefit carried over into future rounds, you have a recipe for disappointment and frustration.

You find yourself studying the various branching technology trees available, wish-listing a path and a strategy that you might like to employ. Then you’ll realise, after a few missions, that to earn enough currency to implement your strategy, you would need to complete the whole game three times over. The difficulty curve also escalates disproportionately with your access to enhanced gear. This means that after being frustrated that you can’t afford to buy anything good, you’ll just get blasted into space dust all over again. Another chance to wallow in the knowledge that you’ll have to start the whole bloody thing again. It’s maddening!

Good roguelikes (In Death: Unchained, I’m looking at you) reward each playthrough with a little something to take into the next run. This builds the gameplay loop’s depth and the difficulty over time and gives the player a reason to keep coming back. Eternal Starlight, however, does none of that and consequently would actually have been better served as a standard campaign-style RTS. As it is, Eternal Starlight artfully dodges the best elements of the roguelike genre and manages to catch only its most frustrating traits. As a result, Eternal Starlight feels like the Star Shaman of the RTS world in many ways, as it suffers from almost the exact same raft of problems.

Eternal Starlight is an ugly looking game, but it has layers.

The overall visual presentation of Eternal Starlight is regrettably lacking in polish and depth. The world away from the core gameplay sees the player on the ship’s bridge or in their living quarters. Unfortunately, these environments just seem flat and unrefined. The characters that appear on your comms screen are also delivered with a retro-style aesthetic that doesn’t land as stylised but instead comes across as poorly executed.

The actual gameplay is obviously set in the expanse of deep space, so backgrounds are understandably barren. However, this isn’t compensated for by detailed, textured models for the various crafts, nor were the graphical resources spent on lighting and effects for the weapons.

Graphically, Eternal Starlight is serviceable at best. The visuals don’t hurt the gameplay, but they also don’t give the player the sense of awe one might have hoped for from a game set in the vast, inky void of the cosmos.

The sound in Eternal Starlight is the weakest component of the game and really let the game down. The sound effects are perfectly acceptable, with a decent array of zaps and pews and kabooms that sell in a decently convincing sense of futuristic space combat, but sadly that’s where the praise for the audio ends.

The ambient music is rather monotonous and does little to convey a sense of urgency or tension throughout the brief combat encounters. It’s not distracting, but it adds so little to the game that, to a degree, it may as well not even be there.

The voice-over, or rather the abject lack of it, is where the biggest problems occur. There is some dialogue between the player and the various other characters in between every cut scene, all delivered via text. While the text plays out, the character offers a sound bite, like “We don’t have much time”, but there is only one such recording per character, and it plays every time they are on screen. This happens regardless of the context of the dialogue. It is distractingly lacking to the point of being immersion-breaking and, unfortunately, screams of a production that lacked the experience and budget to deliver this element to a benchmark standard.

Eternal Starlight is an ambitious attempt at combining the RTS and Roguelike genres that sadly fails to deliver on the enormous potential of the concept. The game offers a profound system of branching tech upgrades that could have been amazing if coupled with more extended missions and more accessible resource management. As it stands, the vignette style 3-minute mini-missions create a disjointed experience that prevents the player from immersing themselves in action.

The Quest library desperately needs something to fill its gaping RTS shaped void, but sadly Eternal Starlight just isn’t it. That said, it’s not entirely devoid of positive elements, so genre enthusiasts may still find some fun to be had. For everyone else, I suggest that we all keep praying to the Oculus Gods for a port of the amazing Brass Tactics.

Eternal Starlight
TLDR : Summary
Eternal Starlight is a brave attempt at combining the RTS and Roguelike styles which unfortunately fails to capture the best elements of either genre. Despite some enjoyable mechanics and some real depth to the customisation of your fleet, Eternal Starlight struggles with pacing and presentation issues that stop it from living up to its potential.
Concept
7.5
Gameplay
5
Graphics
4.5
Audio
3.5
Longevity
4.5
User Rating0 Votes
0
Pros
Skirmish mode offers satisfying space battles
Loads of unlockable content
Deep, strategic customisation system
Cons
Slow pacing marked by excessive cutscenes
Lack of intuitive rotational controls
Appalling sound design
Limited access to resources gatekeep all the best action
5
Clunky
Get it on the Oculus Store
Eternal Starlight