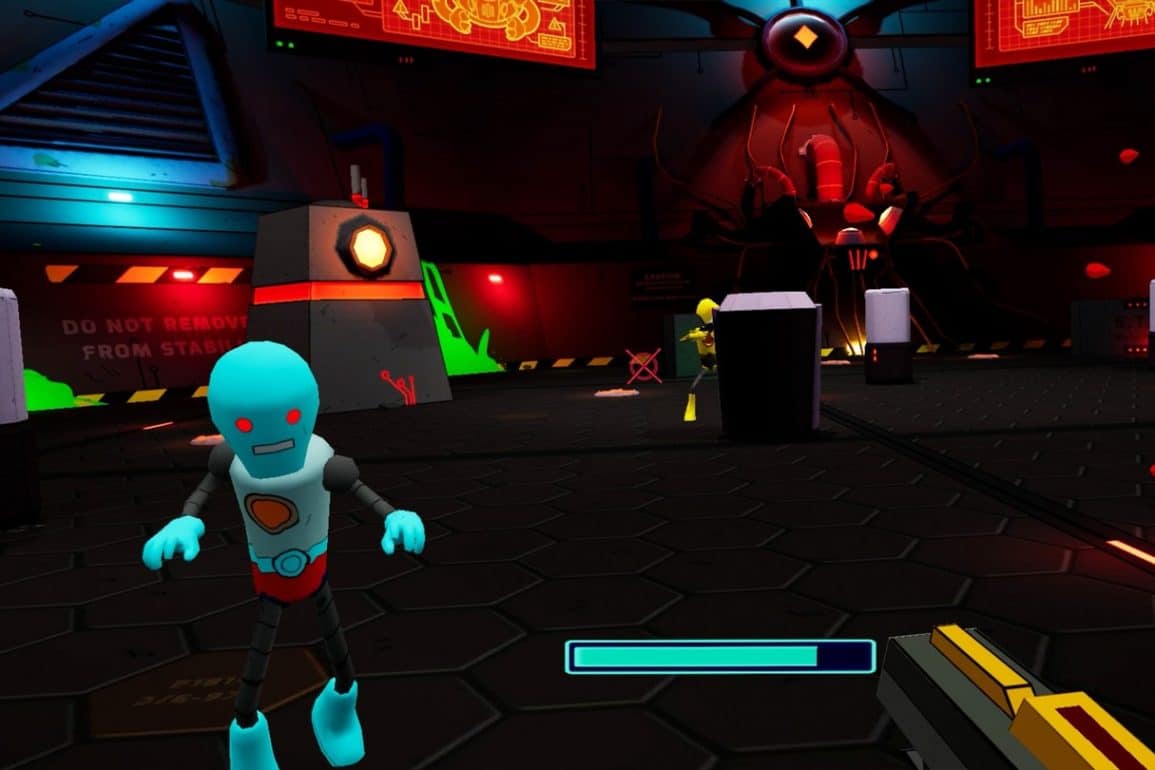 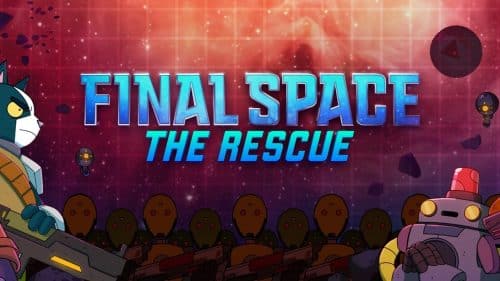 A strange internal dance occurs when a game like Final Space VR: The Rescue is announced. The notion of a playable iteration of a beloved IP is naively enticing. One’s imagination can get carried away with the hope of living out experiences that have been so captivating as an observer.

On the other hand, some trepidation comes along with such an announcement. Video game history has taught us that a good IP rarely guarantees a good game. In fact, as a community, we gamers have endured countless crap-fests shovelled under beloved IP’s.

So it is within the throes of this delicate emotional ballet that we enter into Final Space and attempt to live our dreams and rescue our beloved Mooncake!

Let’s be clear on this from the beginning. I LOVE Final Space.

In fact, if you haven’t seen it yet, you have my permission to leave this review and start watching it now. Go on, I’ll wait…

The other thing worth being clear about at this early stage is that I DO NOT love Final Space VR: The Rescue. Olan Rogers, the show’s creator, is kind of a personal hero of mine, so believe me when I say that it is beyond painful for me to say this.

Final Space VR: The Rescue sees the player enter the world of Final Space through a disappointingly simple plotline that runs adjacent to the main franchise. Essentially, the game uses the same cast and overall narrative style as the show but populates a cookie-cutter storyline that forgoes familiarity with the source material in favour of easy access. It’s a decision that makes sense on paper but carves away one of the core elements that has given the show its success. Without the show’s beautiful ability to develop nuanced characters and build intricate plotlines, what you have left immediately feels like some kind of Final Space Lite.

As such, upon entering the game, you will discover that your buddy has been kidnapped, and it’s time to go to The Rescue. That, I’m afraid, is about at cerebral as things are going to get…

Offering the choice of playing solo or co-op, Final Space VR: The Rescue lets players embody one of four of the franchises most iconic characters before setting off to battle through a planet-sized prison complex in search of the missing Mooncake.

Sadly, what this actually equates to in gaming terms is about an hour and a half’s worth of uninspired walking over there, shooting those guys and then walking somewhere else to do the same thing.

Groundbreaking this is not.

I’M GOING TO MURDER YOUR FACE OFF!

The most flattering description one could adorn Final Space VR: The Rescue with is that it is a technically functional shooter. By that, I mean that movement, holstering, and firing weapons all pose the essential utility they were designed to deliver. However, the sad truth is that “functional” is definitely the highest praise that can be given. There is such little depth to Final Space that one could be forgiven for thinking that the team behind this game had never before played VR. This is, incidentally, not the case. Grab Games are responsible for the not entirely terrible Knockout League, so what happened here?

Your guesses are as good as mine.

The game world that Final Space inhabits is so void of any of the interactions that make VR engaging that it’s actually staggering. There is nothing that you can grab, move or climb, or… anything. Other than picking up a gun or holding your hand over a scanner to open a door, the world isn’t interactive at all. You can’t even grab a keycard and use it; they just magically appear and then inexplicably float over and open things themselves!

Locomotion in the game is permanently set to the pace of a largely ambivalent sloth. That’s right, in Final Space VR: The Rescue, you can’t even sprint!

The levels are linear sequences of corridors that funnel the player into the next action sequence. These are invariably large rooms where you need to blast a selection of non-descript enemies until such time as the game is benevolent enough to let you proceed. Throughout the proceedings, the stakes remain painfully low as any time you take a sizeable amount of damage, a cookie (the in-game health pick up) almost automatically appears. In my playthrough, I never came even close to dying, and before long, I stopped trying to avoid damage altogether.

IT’S A LOAD HUE A LOOOOOAAAAD!

Final Space VR: The Rescue is most definitely a game that is best played in the co-op mode, and one can’t help but think that the only true enjoyment to be had here would be running through the game with a good group of friends. While that may be true, that is hardly what I would call high praise. Final Space VR: The Rescue is better with friends in the same way that standing in a parking lot at 2am eating cold beans out of a tin is better with friends. I mean, yeah, it is better, but I’m willing to bet that you’d all rather be doing something else.

Final Space VR: The Rescue is so bland that it reminds me of when cereal companies used to buy rights to old video games, reskin them in the image of their mascot and shove copies into sugar-laden cereal boxes as a way to peddle diabetes to the obliviously hyperactive children of the mid-’90s. For the gaming iteration of a show as intelligent as it is innovative, it is astounding how little originality or thoughtful design has been applied to the gameplay mechanics.

With just a bit more attention to the basics, Grab Games could have had a reasonable game here. Access to a few powerups, usable items, and even a rudimentary inventory system would have helped bring the core gameplay in line with modern standards. Similarly, some more focus on some basic environmental interactivity would have really scaled up the sense of immersion and made the experience feel more relevant. Adding in some familiar VR mechanics like sprinting, climbing, or defensive capability would have added some much-needed depth and versatility to the gameplay.

But I think the biggest thing missing from Final Space VR: The Rescue is a story that does justice to the source material. I usually prefer games that take a perfunctory approach to narrative and focus on the action, but in an IP like Final Space, that feels like a misstep. It’s a shame for a franchise that is so good at balancing humour and action across ever-evolving plotlines to be reduced to a short game with an almost entirely irrelevant story.

GET OFF MY CHEEKS HUE!!

Final Space VR: The Rescue does manage to hold its own in the graphics department. While it’s hardly going to make jaws hit the floor, it is still a decent representation of the Final Space world. For the first few minutes, it felt great to be inside one of my favourite shows of all time. Wandering the halls of a prison planet with Avocato, Nightfall, and Tribore was pretty cool. The environments are what you’d expect from being transported into an animated series, with a healthy dose of cell shading giving a crisp, clean visual landscape.

The sound design is by no means brilliant. Still, it’s not terrible – with a reasonable array of ambient and spatial sound design adding to the basic functionality of the gameplay. The weapon sound effects lack oomph, though, making the combat feel a little muted, but in the context of the game, this is far from being a major complaint. Pull the trigger, and the gun goes “Pew”, so I think we can chalk that up as a win…

What should be commended, though, is the voice acting.

Despite lacking profound content, the cast’s talent and confidence with their characters are a pleasure to experience. Maybe it’s because I’m a massive fan of the show, but being amongst the soundbite banter of this excellent ensemble was easily the best part of the Final Space VR: The Rescue experience for me.

Final Space VR: The Rescue is a multiplayer shooter that has, unfortunately, arrived about 6 years too late to be of any meaningful value to the genre. Offering a tepid action-adventure that showcases the best elements of 2016 VR, GrabGames have unfortunately failed to do any justice to an otherwise outstanding IP.

It pains me to say that without the franchise’s trademark depth and nuance and lacking the immersive interactions or basic mechanics of modern VR gaming, there is very little of Final Space left to Rescue.

Final Space VR: The Rescue
TLDR : Summary
Final Space VR: The Rescue is not the game you're looking for. Go play After the Fall instead. Better yet, just this once, take the headset off and go binge-watch the first two seasons of Final Space. You'll thank me later!
Concept
3
Gameplay
4
Graphics
7.5
Audio
6
Longevity
2
Pros
The voice work from the original cast is great
It has not, as of writing this review, given me a terminal illness
Chookity
Cons
Uninspired, unoriginal gameplay
Shallow mechanics reduce immersion
Lacks dynamic interactions with the game world
Gunplay feels muted and unsatisfying Level design is overly simple and lacks creativity
4
Chookity
Get it on the Oculus Store
Final Space VR: The Rescue