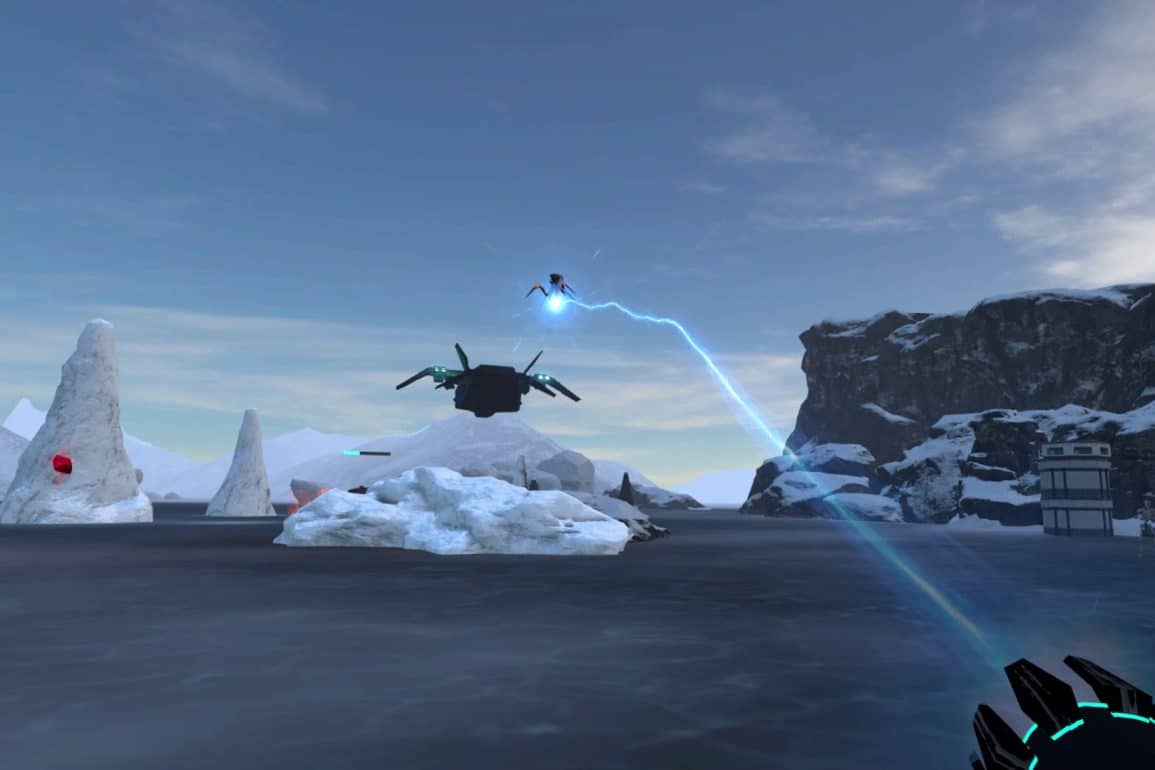 It’s not often that something comes along offering a unique spin on a well-established genre, so I was a little excited when I heard about Guardians VR. Offering gameplay that aims to blend the best elements of FPS action with Real-Time Strategy, Guardians VR hopes to provide players with a unique, tactical action experience. Developers Virtual Age, the team behind the commendable Gladius (covered in our Best of Paid SideQuest piece), have seen fit to trade in their swords and sandals for some high-tech blasters and robot minions for their latest VR title, Guardians VR.

It’s worth mentioning right from the start that Guardians VR is an Early Access title, which is a relatively new phenomenon for the Quest. For those who aren’t yet familiar with the term, an Early Access title is essentially still a work in progress. Generally released at a lower price, developers showcase a game’s core elements and offer players an almost-finished version which is later finalised based on community feedback.

Guardians VR is a great example of this. There is undoubtably some more work to be done here, but the bones of something excellent are apparent straight away. After putting numerous hours into the gameplay, I’ve enjoyed the game on offer now and am looking forward to its ongoing development.

Did someone say Mash-Up?

Guardians VR is a first-person shooter that also includes strategic resource management and troop deployment elements. This combination of FPS and RTS elements is where Guardians VR really shines. The combat is fun in its own right. Still, the act of balancing between protecting your resources while building up your forces and pushing forward with your objectives is what makes the game uniquely enjoyable.

There is a limited storyline, essentially based around the idea that the player is a Guardian, tasked with protecting various automated mining operations on a series of remote planets. Missions progress over three distinct worlds, all overrun with hostile alien lifeforms that give off some severe Starship Troopers vibes.

Playing Guardians VR reminded me of two of my favourite flat games from days gone by. The weapons and combat have a familiar Halo feel. This feeling has only been enhanced by the Plasma Blade update. Outside of the direct action, the strategic command options and the alien race’s aesthetic design clearly take some inspiration from Starcraft.

During each mission, the player must switch rapidly between deploying defensive structures and controlling troop actions to jumping into the fray and taking down the enemies directly with a range of seven different futuristic weapons. It takes a little getting used to at first, but it’s a really great twist on a prevalent genre once you do.

Missions comprise various fairly standard formats, anywhere from payload style affairs where you guard a moving mining unit to straight out wave defence. Resources need to be harvested to purchase troops and defensive structures. The need for these often requires you to venture outside of your comfort zone.

While you can play Guardians VR as a straight shooter, I strongly recommend avoiding that urge. The developers have even gone as far as to weigh the scoring system to reward tactical play. To get a coveted place on the leaderboards, you will need to be more than just a crack shot. The combat is fast and fun, and the strategic elements are light and engaging. While Guardians VR contains tactical components, make no mistake, this is an action game at heart.

The mix of UI systems needed to manage these core components are thoughtfully composed, making blending these playstyles on the fly both intuitive and easy. Menus are well laid out. With a small amount of practice, you can switch between deploying units, building structures, and selecting weapons in seconds. Hotkeys and unit grouping mechanisms are present, allowing you to command your troops quickly and effectively. The map, teleport point system, and jetpack all work together, allowing you to move amongst the action swiftly and react to situations as they arise. All in all, it’s a lot of fun and feels like a fresh way to shoot aliens in VR.

Guardians VR hides its Early Access standing well in most areas, but it does feel like there is more work to be done on the graphics than in any other area. The visual world of Guardians VR is perfectly acceptable, although a little on the bland side. It would seem that to keep the maps large and open and the bugs fast and flowing, the developers needed to choose some somewhat dreary settings for the action to take place. Whilst this isn’t a big complaint, the two worlds available at launch are desert and snow themed, respectively and create large expanses of somewhat flat, uniform terrain. It’s perfectly functional and doesn’t hinder the gameplay, but it’s far from stunning.

The waves of insectoid aliens are again adequate. However, like the environments, you can see where there is still some work to be done. Compared to the assets used in the similarly themed Crashlands VR, enemy animations and terrain textures seem flat. It would be a shame to see Guardians VR‘s fantastic gameplay overlooked just because a prettier equivalent released around the same time.

A few other small visual components require a bit more polish, but nothing is close to game-breaking. The static loading screen, an oversized image of a cockpit, is probably the most significantly underwhelming asset. Still, I’m sure that can be addressed easily enough.

The audio is relatively good, with meaty sounding zaps and bangs for all the sci fi weapons and appropriately monstrous screeches when the bugs die. The soundtrack switches from a calm country twang reminiscent of Joss Whedon’s excellent Firefly series to some more up-tempo electro sounds when the combat gets going. It all works effortlessly, with the sound playing a supporting role to the gameplay, propping it up without being insistent in itself.

The more the Merrier

Guardians VR launches with both single-player and co-op campaign, as well as PvP and PvPvE modes, which will no doubt be the icing on the cake for many.

The PvP option consists of three game modes: Deathmatch, Team Deathmatch, and Destroy the Base. I should note that I played before Guardians VR went live on App Lab and, as such, found the player base a little small. However, when I was able to organise games in advance, it was generally enjoyable. There are a few elements that highlight the “early access” nature of the game. There is still a bit more work required before the multiplayer experience feels complete, but after giving our feedback to Virtual Age, I was pleased to find that tweaks and balances for almost all of our concerns were already being addressed. Like the rest of the game, the core elements of something enjoyable and unique are in place, but there is a bit more polish needed.

I was considerably more successful in finding Co-Op games, largely by virtue of the “allow players to join” toggle. Thankfully, this meant there was no need to wait around for players if I didn’t want to. I could just jump in and get blasting, and other players could jump into the game at any point throughout. In most cases, I was happily slaying space bugs by myself before noticing that I had company.

At launch, Guardians VR provides two planets to fight your way through, each containing four levels, with a third world to follow shortly after release. I was averaging about 15-20 minutes per level on normal difficulty, so even without the multiplayer, there’s a good 2-3 hours of content here with more on the way.

I have been able to chat with one of the developers throughout the beta and initial SideQuest launch. There is a healthy roadmap of additional content planned, including new unit types and weapons, some interesting new missions, and even a map editor. There was also some discussion of possibly expanding the gameplay to embrace the RTS side of things more fully. Personally, I’m throwing my full support behind that idea.

Once more into the breach

Guardians VR offers a fresh spin on the often-tired FPS genre and is a genuinely promising new title for the Quests unofficial ecosystem. It has an impressive level of finish for an early access release and a well-defined sense of the game it will become. Sure, there are little bits here and there that could use a bit of polish, and the strategy element could be fleshed out some more, but the bones of an excellent game are clearly there.

Although the score as it stands might seem on the low side, I have high hopes that Virtual Age will deliver on the potential that the EA version shows. If they stick to the promised roadmap for new content and really focus on the gameplay’s Starcraft style strategy elements, I have no doubt the final release will see a higher score.