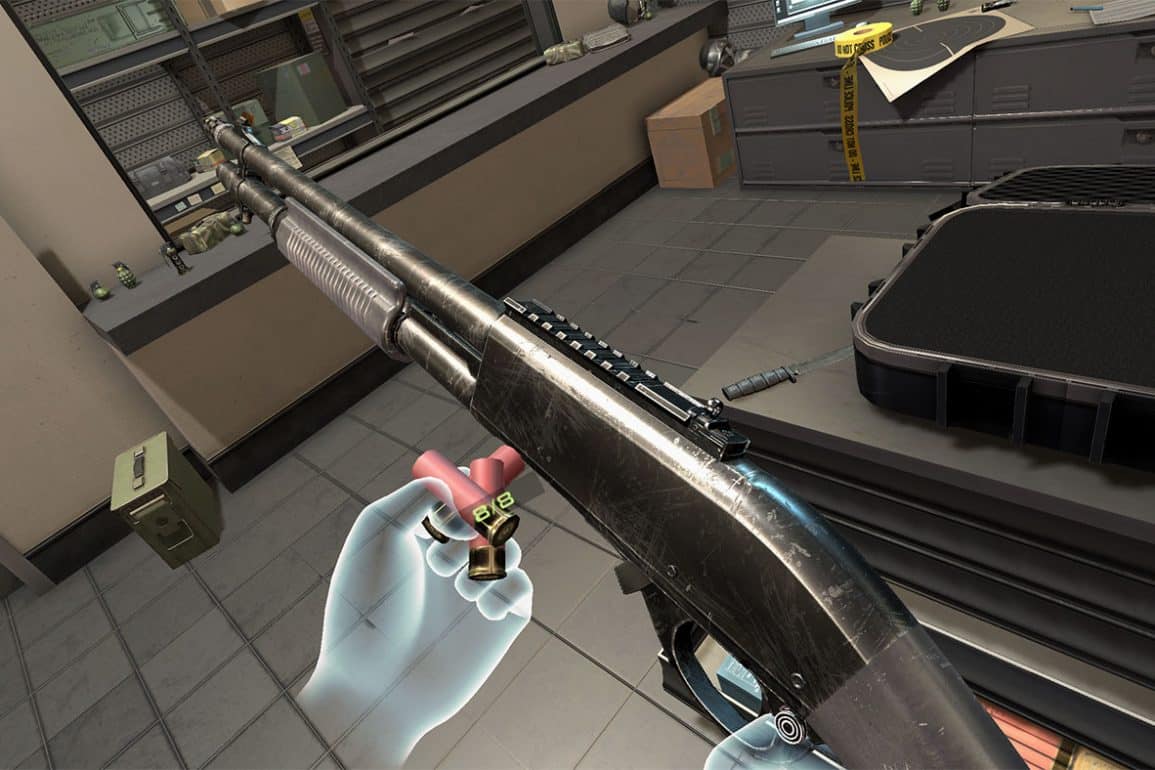 If you’re a firearms enthusiast, a virtual gun range sounds like a great way to sharpen your skills. You might even learn a bit about proper weapon handling and maintenance. Perhaps someday we’ll get that game on Oculus Quest, but Gun Club VR is not it. Gun Club VR offers a varied VR arsenal, from compact pistols to gold-plated AK-47s. It’s just a shame the missions themselves are so tedious and repetitive.

Adapted from a mobile series, Gun Club VR lies somewhere between realistic simulation and arcade lightgun game. We often hear from developers that trade-offs have to be made between realism and fun, but much of the time Gun Club VR manages to be neither.

You start by purchasing a weapon from a virtual gun store, using an in-game currency that can be earned by completing brief target-shooting challenges. While you shop, a still image of a tough-looking military type will suggest your first few items and levels. It would have been nice to meet a realistic-looking, properly animated gun trainer to give you some pointers on handling your weapon.

At least the gun handling mechanics feel more immersive. To reload your weapon, you have to physically reach down to your belt for more ammo, slide the clip into place, and then pull back on the charging handle. Each weapon will reload a little differently— for example, shotgun shells have to be individually inserted by pressing the X button. Although more realistic, this mechanic also will slow you down during missions, making a larger clip the first accessory you’ll want to purchase in the game’s store.

Once you’ve selected a weapon, there are two environments where you can blast away at cardboard cutouts. The first is a sizeable concrete warehouse, and the second is a bombed-out town meant to simulate World War II. Your targets appear as cardboard cutouts and will resemble criminals, zombies, or German soldiers. They’ll pop up in random locations, and the zombies will actually shuffle towards you while groaning.

You’ll quickly tire of looking at the same few variations for each target. The “action” challenges allow you to move around by aiming at a highlighted area, but it doesn’t do much to freshen up the handful of targets and environments. The sound effects and music are also recycled again and again. While the ammunition is limitless in Gun Club VR, creativity seems to be in short supply.

As you advance through the game’s dozens of nearly-identical challenges, you’ll be able to unlock laser sights, scopes, and other accessories for your weapons. However, I found that one decked-out pistol was more effective than spending big on shotguns and rifles that were much harder to aim and reload. I also found peering through tiny, virtual sniper scopes to be physically uncomfortable.

Gun Club VR does a solid job with most of the VR shooting mechanics. Delivering a headshot to a cardboard bad guy hiding behind a hostage can feel briefly satisfying. But after doing this identical action hundreds of times, it loses its appeal.

Your personal appreciation for nicely-rendered firearms will affect how much you enjoy Gun Club VR. If these shooting mechanics could be wrapped up in a more attractive package, with more variety and personality, it’d be a far more compelling purchase. For now, it’s an uninspired simulator that will train you for other, better games.