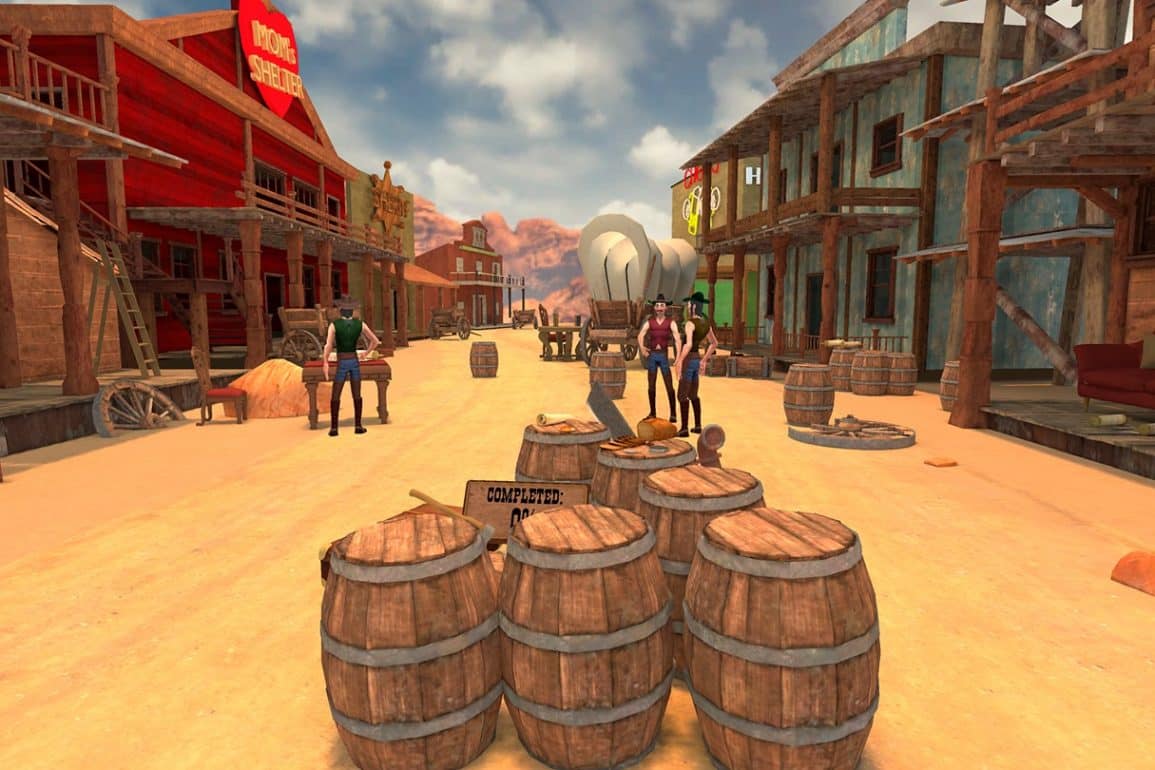 Arcade Shooter With A Western Vibe 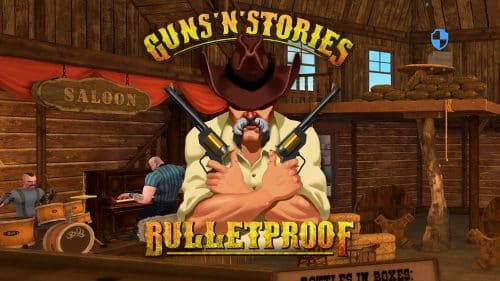 Well.. more like Guns n Whatever! So sorry to blow this right up from the start, guys – but please don’t bother. If you really need to check Guns’n’Stories: Bulletproof VR out (because desperate times require desperate measures), cross-buy it or wait for a sale – and save your expectations along with your money.

Let’s Take This from the Top, Shall We? YEEEEEHAW!

The lobby is nothing much. From a saloon-like environment, you get to choose multiple difficulties and whether you want to just shoot up some bandits in Arcade mode, or start out in story mode. The story mode follows a backstory introducing us to Junior and his Grandpa Bill. The latter starts telling Junior weird stories fueled by booze and a wild imagination. These are not the kind of historically accurate anecdotes you might expect in a western-themed shooter. Instead, they’re supposed to be funny and mostly unrelated pieces of slapstick garnished with too many movie references and exaggerations. To be honest, I got annoyed by Grandpa Bill very early on, because he just didn’t shut up. The old geezer blabs on and on, sprinkling in over-used movie quotes and tough guy oneliners – over and over again. The repetitive music that accompanies all this doesn’t help.

3DOF? But This is 6DOF REVIEWS!

The game is mostly played from a fixed position and feels more like being designed for 3DOF use on devices like the Oculus Go. It’s basically a wave shooter on rails without the rails, because you are tied down to one location per map.

I think my editor wanted to do me a favor when he asked me to review Guns’n’Stories: Bulletproof VR. It was supposed to be a fun and challenging arcade ‘wild-west shooter’ type of game.

Little did we know!

It’s not just the lack of movement, but the layout of the maps itself. The story mode consists of three acts in three stages, so you get nine maps in total and an estimated playtime of maybe 90 minutes on average difficulty. The maps are designed as linear shooting galleries, where wave after wave of enemies hit you. You start out with an old-timey colt, a bottle of whiskey, and yes, Grandpa tries to stay hydrated throughout the whole game. Unfortunately, you can only shoot your enemies, not the environment itself and, sadly, not even yourself. Believe me – listening to Bill blabbing on like a drunken monkey, I tried that several times to no avail.

Your equipment gets upgraded throughout the story, and weapons choices reach from colts to a combo of a futuristic grenade launcher and a yellow assault rifle. There is even a special move I actually liked! You can deflect bullets anytime by punching them out of thin air with your guns. That way, you will at least get a halfway decent workout for your arms, or you can take the lazy approach and just hold one of your guns in front of you like a shield. That will also do the trick.

So, you can shoot your enemies and will continue to do so in a mostly red and comic-style landscape full of canyons. The body models for your enemies feel like they repeat themselves every four goons. They consist of a fat guy wielding a pipe, a fat guy handling hefty weaponry, and two kinds of skinny guys with more or less the same features. There are lots of hats, of course – it’s the west, son. While the lobby looks polished enough at first sight and the difficulty selector gives off a Wolfenstein vibe, the environments and enemies are kind of clunky. It got weird when enemies rolled around on Segways and threw swarms of drones at me. DRONES. SEGWAYS. IN THE WILD WEST!? Are you kidding me? Sadly that was one of the few chuckles I got out of it and quickly lost its charm when replaying the same map in Arcade mode. Also, the guns were put together weirdly. Some looked really good and were fun to play, others were just so far off the setting of the game and felt as clunky as they were rendered. Unfortunately, and especially in comparison to the Rift version, the overall graphics took a massive dive.

I maybe was mistaken to start out with the story mode, because Grandpa quickly stepped on my nerves. But it’s no surprise that the music is mostly repetitive too. It sounds like someone hired half the house band in a square-dance place and gave them just one riff to play with. Just the one, and we all know it! It sounds like cheap electric western music and jingles up and down around McDonald’s on TexMex week every year. No, thank you. Enemies and Grandpa aren’t very distinguished with their wording. Neither is the voice-over for kill combos and everything else. If there were at least different effects or maybe rewards being announced separately from map to map. Well, there aren’t any. Nothing to hear here… moving on.

Despite everything – there was a point I when actually had fun with Guns’n’Stories: Bulletproof VR! The arcade mode, people. That’s where it’s at.

Enter Arcade mode! I actually had the most fun just killing some time, especially in the night-themed maps. The game runs relatively smoothly on my Quest and loads up quickly – so if you are up for a quick round of mindless shoot n scoot, just go for it. You can’t really die (in fact, you can, but the game just turns to slo-mo until you catch up for quite a while), and your guns are always powerful enough to blast your way through the waves. If you can ignore Gramps repeating himself every three minutes, this might actually work out for you! If you like continuity and backstory…not so much. The western theme is just a vehicle to get some very dusty jokes across, and these didn’t age well, so don’t take that too seriously. If you are into the olden times, look for something like Dead and Buried instead. Sure, its got zombies (as does Death Horizon: Reloaded) – but the graphics are better, and the wild west comes across just right.

We can’t expect AAA quality from a B-priced title, but still…I had moderately high hopes when I saw some gameplay videos of the Rift version. The Quest version significantly dropped the ball when it comes to the graphics and gameplay quality. Some changes were to be expected, but even the little gizmos in the start menu and inside the maps were cut from the final game. That’s a bit sad.

Combined with the omnipresent, but oh-so over-exaggerated, tongue in cheek humor, the gameplay actually gets annoying. After hearing the same banter between Bill and his grandson for the third time in as many minutes while shooting an identical guy for the tenth time in the same timespan, the lack of depth actually threw me off my game. Did I mention that you, sadly, can’t shoot yourself in the game?

To be fair and at this point, I can’t stress this enough: Guns’n’Stories: Bulletproof VR is a $9.99 title. So maybe it is to be expected that it looks, feels, and plays like a $9.99 title. I was hoping for a little more.

Gun'n'Stories: Bulletproof VR
TLDR : Summary
A quick and dirty arcade shooter with a back story inspired by the wild west. If you have a high tolerance for simple humor and repetitive wave-shooting, go for it. If you expect a little more variety or a concept taking advantage of the freedom of movement the Quest provides – don't bother. For its arcade spirit, I give it a weak single thumb up despite major shortcomings in graphics and gameplay.
Concept
5
Gameplay
4
Graphics
4
Audio
3
Longevity
4
User Rating0 Votes
0
Pros
Fun for 10 minutes at a time
Cons
Graphics are sub-par, even for the Quest
Voice-over and gameplay are both very repetitive
Doesn't make use of 6DOF at all
No motivation to replay
4
Meh
Guns'n'Stories: Bulletproof VR
Get it on the Oculus Store