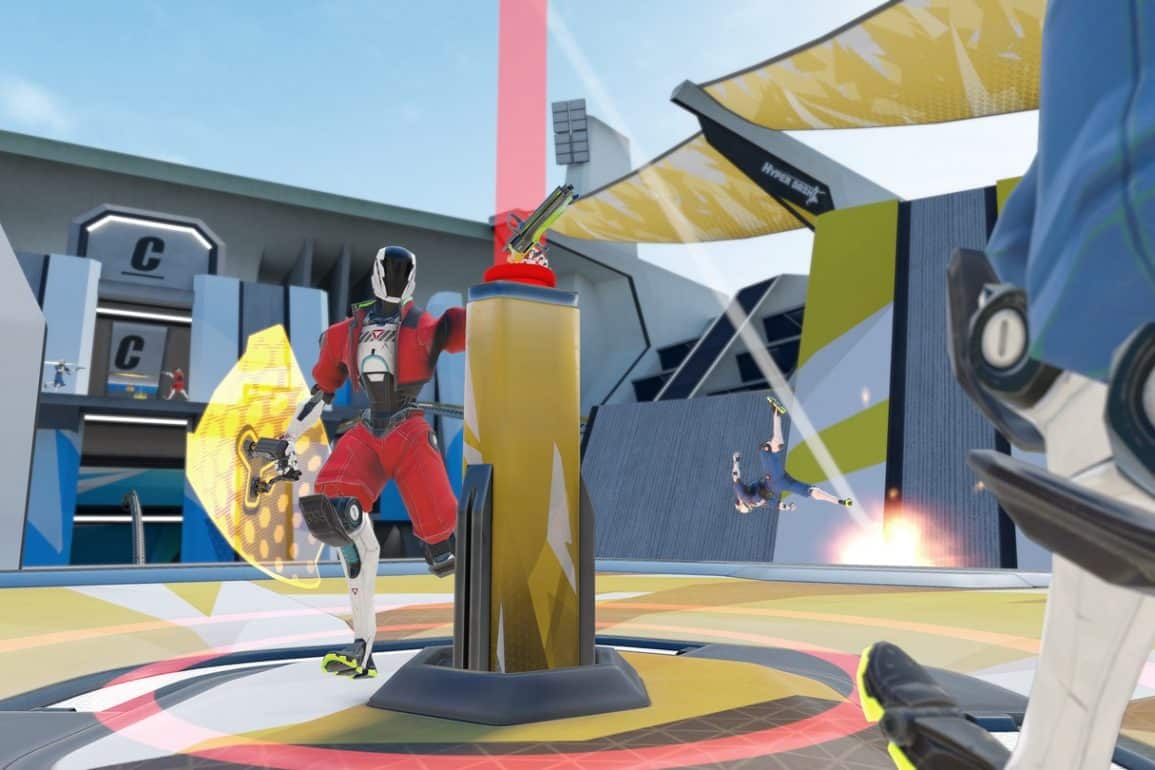 Online Multiplayer with a Strong Player Base 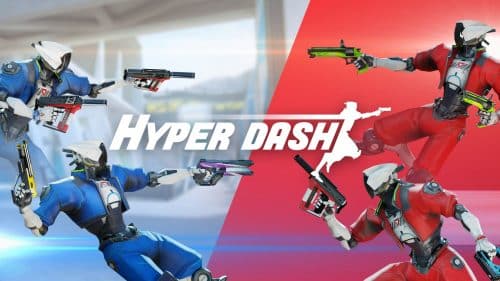 Even before it came to the official Oculus store, Hyper Dash had long been one of the most popular multiplayer titles on SideQuest, with over 170k downloads to date! With update after update, Hyper Dash has continued to impress.

At an Oculus comfort rating of Moderate, Hyper Dash is suitable for most VR users. It relies little on smooth locomotion and primarily uses dash teleportation and an on-rail movement system. Despite the high-speed turning and movement inherent to most shooters, the teleport mechanic is well suited to those who haven’t entirely developed their VR legs yet. Once properly understood, players will need to utilise the erratic movement granted by this teleportation to improve their chances against enemies. Although those players will likely be doing the same to you, so you’ll have to watch out for the ephemeral trail that marks a sudden dash. Hyper Dash also gives players complete control of their movement on the rail system, allowing them to hop on or off at any time and even choose their initial direction.

Moving on from movement, the akimbo style dual-wielded weapons lend themselves well to the freedom offered by the Oculus Touch controllers. Players can equip any combination of guns they choose, depending on what they need for that map and assuming they can find the weapon spawn points within it. Various map designs allow diverse gameplay across multiple modes, including Deathmatch, Capture the Flag, Domination, Elimination, and the ever-popular Payload.

The graphics are absolutely astounding for a game that can run natively on Quest 1 with up to 10 players! While maintaining solid framerates, movement trails and weapon discharges are colourful and dynamic up close. The player avatars are crisp and easily identifiable from across the map. The simpler wall textures likely assist the game’s stability but still fit well with the theme of a futuristic combat simulation and rarely detract from the overall experience. Most of the time, your focus is drawn by other visual elements like faux reflections, impressive lighting and water splashes.

While the game doesn’t give you much time to stop and smell the roses, you can still appreciate some things before you’re struck down by a gun-toting robot. Whether it’s a laser, bullet, or missile, the unique and satisfying weapon sounds won’t ever be as enjoyable as the hit register when you strike an enemy.

Audio in this game is designed to feel busy and action-packed, from the ambient hype music through to the movement sounds and game alerts. Constant communication with your team adds further to this, and there’s almost always someone desperately trying to yell callouts or coordinate a new plan. Proximity chat with enemies allows for even more interactions; some good-natured teasing, various intimidation tactics, and the requisite trash-talk that’s an ever-present aspect of most online games.

Where Hyper Dash frustrates is in the high skill ceiling set by an already experienced player base. Despite doing its best to teach players the ropes, the tutorial doesn’t quite prepare new players for the brutality of experienced players. However, players can practice as much as they want, and the AI bots are surprisingly good, albeit lacking in team tactics.

Smooth locomotion is present in Hyper Dash but seems utterly useless in the game. Emphasis is rightly given to the teleportation dash mechanic, but if you struggle with that system, you will stand absolutely no chance at trying to get by using only the sprint mechanic. It is, at best, a helpful way to close the gap after a poorly aimed teleportation or to strafe while shooting from a distance.

Further Down the Line

Luckily, most players quickly adapt to the teleportation mechanic and find it one of the most crucial elements in making the game exciting and fun. After amassing an extensive player base through SideQuest, the official launch allowed for even more popularity as access became more accessible and the dedicated servers became more populated.

Competitive tournaments and eSports groups such as Dash League will undoubtedly continue to develop as the numbers and interest grow.

Though players have some level of individuality, the developers at Triangle Factory could take a page from EchoVR and implement greater degrees of customisation to the colours and patterns players can equip on their avatars and gear. Additionally, the introduction of ranked games could reduce the barrier of entry for new players, with potentially more customisation rewards available in the competitive servers as an incentive for high-level players.

Despite some barriers to entry for new players, Hyper Dash is a solid FPS that made its mark early on and managed to foster a healthy community of players. I can’t wait to see what changes they bring to it in the future with proper funding and an ever-increasing fanbase.