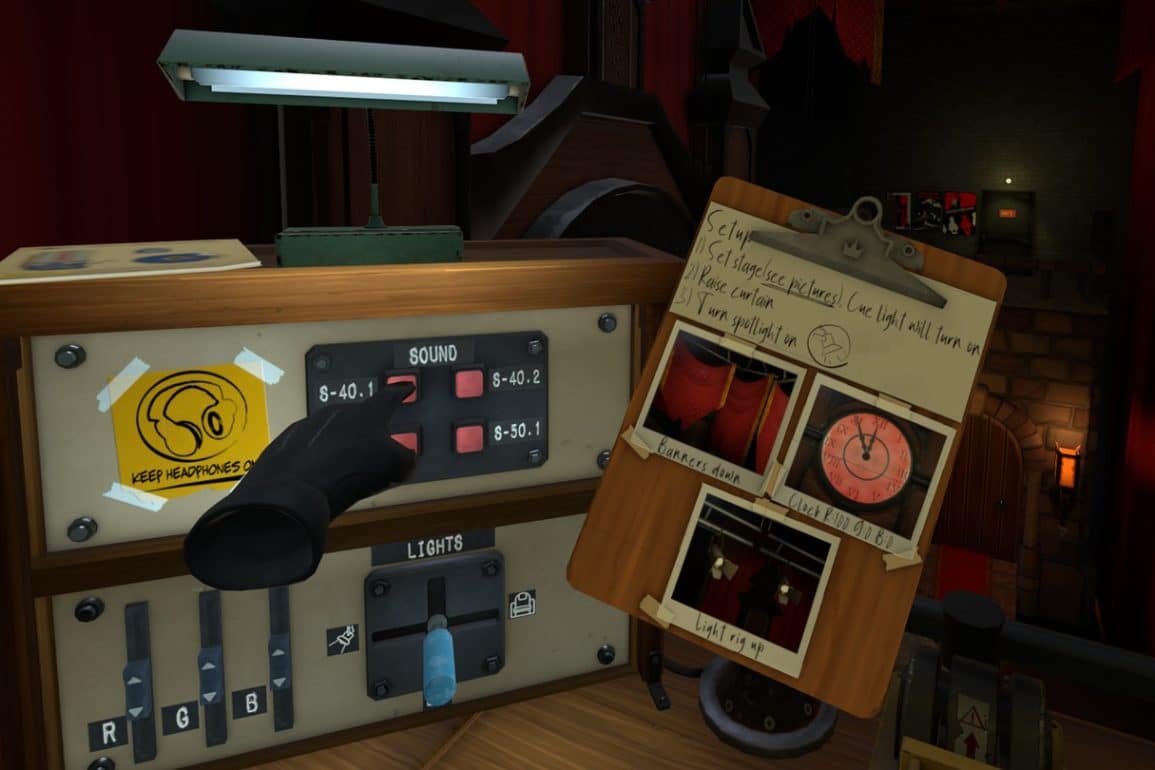 I Expect You To Die 2 | Review

I Expect You To Die Returns for an Encore! 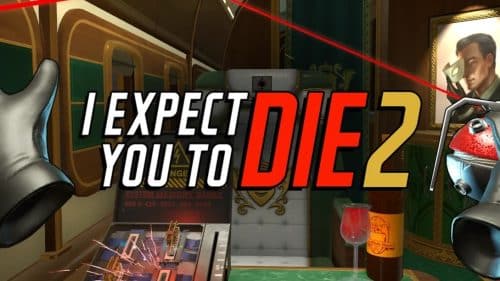 There’s a pretty good reason why I Expect You to die 2 isn’t called “Well, I Guess There’s a Chance You Might Die 2”. For starters, that’s not what the first one was called. That would just be weird. The other equally obvious reason for the title is that you will, in fact, die. A lot.

Following on from their 2016 release of the original IEYTD followed by the successful 2019 Quest launch, Schell Games are once again donning the fake moustache of intrigue and the laser watch of… also intrigue. The original game won players over with its complex, challenging, yet achievable puzzles and its well-judged sense of humour. It’s safe to say that if you enjoyed the first outing, you’re probably going to love the sequel.

Shortly after IEYTD launched on Quest in 2019, the team at 6dofreviews did what we do best… we reviewed.

At the time, the charming and articulate Andrew Podolski gave the original an impressive score of 9. Upon being assigned the sequel, the first thing that I did was re-read his review. The second thing I did was play the first game, a particular delight that had until now eluded me.

It’s probably worth noting that although I wholeheartedly agree with everything he wrote and thoroughly enjoyed the game, I would have set the score a little lower. I don’t raise this to criticise Andrew, but to contextualise my score for I Expect You To Die 2. So, despite the slightly lower score, rest assured, this game is every bit as good as the first one.

YOU ONLY LIVE TWICE… OR MAYBE 3 OR 4 TIMES

The I Expect You To Die series operates on a simple premise. The player embodies the voiceless form of a daring international person of mystery who, with the help of a dryly witted and quintessentially British handler, must take down a nefarious international conspiracy. I won’t go into any detail on the story’s particulars, but if you go in expecting an intersection between Austin Powers and Skyfall, you’ll be reasonably well prepared.

Each mission sees the player begin in a thematically appropriate setting with little more than a few verbal prompts to guide you to your task. Vagaries along the lines of “See if you can find out what they’re up to” are often all you get before setting about unravelling the mysteries that will see you through to the next stage.

Early in the process, you will find that there are a great many ways for you to fall afoul of the games’ traps and trickeries, and subsequently that there are many, many ways to die. Careless handling of seemingly innocuous objects can result in a swift and unexpected death, which gives an underlying sense of tension to what can occasionally become haphazard experimentation with the environments.

There is a fundamental logic to how you approach puzzles that quickly grows familiar while remaining challenging. Despite this inherent logic, there is still a healthy dose of trial and error involved in working your way through the puzzles – a fact which is largely responsible for your titular demise. Mercifully you can try, fail and try again as many times as it takes.

As long as you have the patience to keep going…

THE SPY WHO TOUCHED EVERYTHING…

If you’re anything like me, when faced with a lack of clear direction and an arbitrary set of tasks, you may well find yourself doing entirely unexpected things. As mentioned above, the game’s logic is consistent, but when you’re feeling clueless, you might find that the best course of action is simply to touch things. Lots of things. In fact, all the things.

Items that can be interacted with will make your reticule glow cyan, and almost all objects you can interact with will play a part in your mission. Some red herrings are mixed in to keep you guessing, but generally speaking, you can find a way to progress with the general attitude of “when in doubt, grab stuff”.

My only real criticism of the gameplay comes as a side effect of one of its strongest elements. The fact that there are so many ways to die means that as you complete each of the sequenced tasks making up a level, the feeling of tension intensifies. Make one wrong move and bang! You’re back at the beginning.

This is a fantastic hook until you get stuck on a puzzle towards the end of a level and find yourself replaying several minutes worth of puzzles that you’ve already solved just to get to the same bit. It’s not game-breaking, but this repetitiousness was definitely my least favourite part of the game.

While I Expect You To Die 2 is clearly a polished game in its own right, it would also play just as well as a paid DLC for the original game. The sequel is every bit as good as the original, if only because, on almost every metric, it scores almost precisely the same. The levels are among the best that the series has offered but lack new gameplay concepts that would make the sequel stand out from its forbear.

Before beginning this review, I played four levels of the first game. I then immediately played the first four levels of the second. In all honesty, at that point, I just felt like I was on level eight of the same game. That is not intended as a criticism, as I really enjoyed the first game, and as such, more of a good thing is always welcome. But those hoping that Schell Games have somehow come to tip the world of VR espionage on its head may want to check their expectations.

LIVE AND LET DIE… A LOT

The team at Schell Games have maintained the aesthetic of the first instalment of the series, albeit in a somewhat more refined way. The graphics are a bright, playful caricature of espionage classics, a choice that marries well with the game’s humour. Items in the world interact with a sense of mass, all the more impressive given the gravity-defying telekinesis that you, as a super-spy, obviously possess.

Objects collide rather than just passing through each other, which goes a long way to adding weight to the world. The game ran smoothly without any glitches or drops in framerates throughout my entire playthrough. Still, given at that one point, I was sat in a largely deserted room for around twenty minutes, trying to unlock a desk by silently repeating the mantra, “Why won’t you just unlock, you stupid desk!” I would be surprised if the Quest suddenly struggled to keep up.

I really wanted a better music-based spy gag title here. A shiny penny for the person in the comments who comes up with the best spy-based music pun!

On every metric, I Expect You To Die 2 is a polished and well-presented title, but particularly so in terms of its sound design. From the epic intro song dripping with the sexy swagger of a Connery era Bond film to the subtle touches with the in-game music, every auditory component of the game serves a clear purpose. Each sonic element enriches the gameplay and, more importantly, contributes to the overall sense of character that the game possesses.

The voice acting, which includes an engaging performance from TV’s Wil Wheaton, is directed perfectly for the game’s tone. From the bit players to the villainess, all of the performances tread an admirable line between glib fancy and credibility. Add to this a world with responsive collision sounds and unobtrusive ambient noises, and you can quickly lose yourself in the game’s world while you sit staring at some puzzle or another, wishing you were just a bit cleverer.

The music’s versatility is also worthy of some praise. Given that you will spend extended periods concentrating on environmental puzzles, too much music would have been distracting. I Expect You To Die 2 provides a soundtrack that is appropriately, even deliberately tempered and is a highlight for its lack of notoriety. There is even a level where the subtle background music is piped in via an old radio, which you are free to turn off. As long as you’re sure that doing that won’t kill you…

As far as longevity goes, I Expect You To Die 2 will be a bit of a mixed bag for some players. Despite challenging puzzles that might even test genre veterans, the game does only launch with six levels. As such, experienced puzzle-solvers may well sail through it in two or three hours, and once completed, there isn’t much reason to return.

There are speedrun challenges, but they feel like an oddly out of place addition to the game. All of the considerable satisfaction that I Expect You To Die 2 yields comes from that feeling when things click, and you have your “Aha!” moments. The opportunity to simply try and perform the solutions as fast as possible seems incongruent with why you’re playing the game in the first place. It’s like if Gorn added a mode where you suddenly had to play the game while tap dancing.

Amateur puzzle solvers like myself will probably get a better value equation, as it took me around an hour to complete a few of the game’s six levels. That said, some of that time was spent in frustrated bewilderment, which I didn’t quite enjoy.

It’s worth noting that the original IEYTD also launched with six levels but received an additional three in post-launch content updates, so perhaps the generous folk at Schell Games will have more to add to his title in the not-too-distant future.

I Expect you to Die 2 is a sequel that seems to effortlessly continue from the groundwork laid down in the original. While it doesn’t offer much that pushes the game beyond its predecessor, it doesn’t fall behind it in any way. With slick production values, great music and voice acting, fiendishly clever puzzles, and an artfully balanced sense of humour, I Expect You To Die 2 offers an elegant second helping of comedic espionage for fans of the first iteration and of the genre alike.

Fair warning, though, casual puzzlers (such as myself) may sometimes find the game difficult to the point of being frustrating. Despite the puzzles being fair, there are a few head-scratchingly tough puzzles mixed in that might test the patience of the less experienced.

I Expect You To Die 2
TLDR : Summary
IEYTD2 packs all the cunning and style a light-hearted spy adventure can muster into a polished and enjoyable puzzler. It does little to elevate the series as a sequel but instead feels like the perfect continuation from where the original left off. A must-have for fans of the first.
Concept
7.5
Gameplay
8.5
Graphics
8
Audio
8
Longevity
7.5
User Rating0 Votes
0
Pros
Incredibly clever puzzles
Highly polished
Great sense of humour
Cons
Repeating puzzles on death can get tedious
Limited number of levels
Can be frustrating at times
8
Diabolical
Get it on the Oculus Store
I Expect You To Die 2