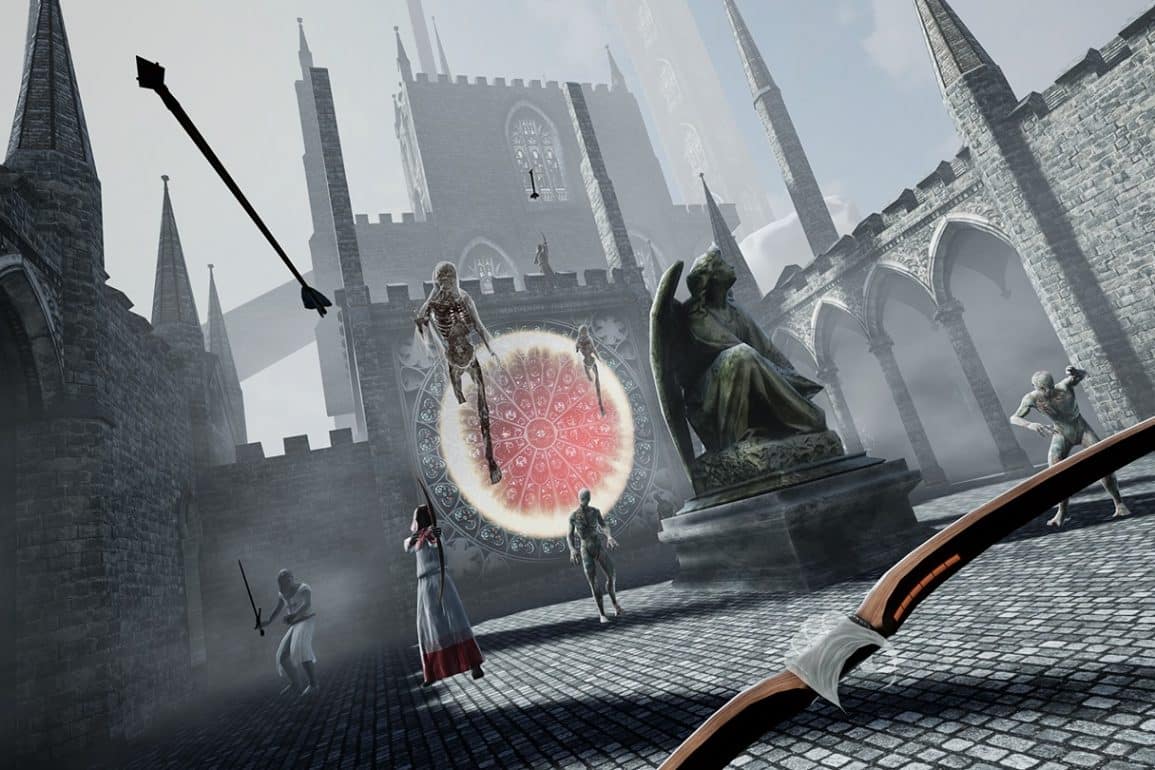 Revisiting the Holiest Archery Game on the Quest 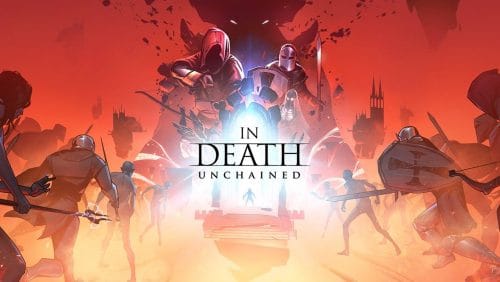 In Death: Unchained, here we are again!

Thanks a bunch, Superbright. With the success of the Quest already being surpassed by the Quest 2, the Oculus Store and Sidequest are now more stuffed with content than Baron Harkonnen is of space pies. There are now many, many, many more games and experiences on Quest than can be reviewed in a timely and thorough manner, even by the well-trained and overworked team of crack commando writers languishing here in the dungeons of Castle 6DoF. We’re all working round the clock as it is, Superbright, without having to RE-review games because you’ve improved them so much since release. And yet here we are.

When I originally reviewed In Death: Unchained, only a few months ago, I gave it a solid 7. Whilst it was a unique and addictive archery game that I loved in its previous incarnation on PCVR, I felt that the Quest version had some rough edges. These affected the gameplay and stopped it reaching the heights it aspired to and deserved. Commendably, the Superbright team have issued a steady stream of improvements, tweaks and additions from the very first week of it being on sale. These tweaks have not only addressed most (if not all) of the game’s problems but have also added to the gameplay and overall experience. So much so, that an incremental upgrade to the score to tweak the original review would not do it justice. So here I am again. Just call me Doc Sisyphus.

A HELL OF A HEAV’N

What pure pleasure it is to be able to report that In Death: Unchained is, thanks to a solid foundation and a tireless and dedicated developer, now one of the best games on the Quest or any VR platform. That’s all you need to know. Go and buy it.

No, I didn’t think I’d be able to get away with leaving it there, somehow. Okay, let me take you by the eyes and lead you through the spires of Heaven.

THE PATH TO PARADISE BEGINS IN HELL

The game casts you as the hands of an unseen archer, moving through procedurally-generated levels dispatching ever-trickier hordes of unholy, monstrous baddingtons. The setting is incredible; whilst most pop culture media uses heavy metal album covers as the go-to depiction of hell, In Death wants to convey the works of Dante and Milton, with the melancholic echoes of the Dark Souls games thrown into the mix. Cathedral spires and cloisters jut impossibly from floating, snowy rock platforms which float in the clouds. It’s an ever-changing, unsettling landscape of statues and stained glass.

As your journey progresses, it will take you through increasingly beautiful and dizzying levels that channel archaic Christian imagery of worship. You’ll traverse Purgatory, Heaven, and Hell; environments which beg to be explored and cleansed of its arcane villains. These range from faceless, hooded monks and rotting zombies to Harryhausen-issue chuckling skeletons and what I believe John Milton himself referred to as ‘little deform’d cherub bastards’. (Please check this, ed).

Your hellish adversaries are well-designed and creepy. They all have distinctive movement patterns and sounds, all of which are excellently placed through positional audio, even when just using the Quest’s built-in speakers. I can’t emphasise enough how improved this is from how the game released originally – the game is so much fairer than it was, even though it’s still bloody difficult.

The archery is simply sublime. Aiming and firing is a quick, rewarding movement which gives empowerment to a beginner and much subtlety and reward to more experienced players. While the game now allows smooth turning and free movement, this is intentionally slow-paced. You won’t be running and strafing like you’re playing Doom; the teleport arrows remain a classy way of encouraging exploration and deliberate, methodical play. Slowly creeping sideways along a balustrade, dodging arrows and lining up headshots, is truly one of gaming’s greatest pleasures. The shield you can bring up to protect against projectiles and melee attacks is excellent too, requiring good timing and skill to make the most of.

The arrow power-ups you can unlock and pick up along the way are really rewarding to use too; fire, freeze, homing and lightning arrows and such. All of these get powered up by specific achievements you earn on your runs, as do your standard attacks. They all have a use and a place in your arsenal; don’t hoard them just for the terrifying and pressured boss encounters.

I’ve never been a massive fan of ‘roguelike’ random level generation per se. It can often leave me feeling demotivated when progression in a game resets on death, and it takes a special title to sidestep my ambivalence in this regard. In Death: Unchained features runs that feel satisfying and rewarding in numerous ways, not least of which is the feedback you get after you fall.

When you find yourself back in the cathedral hub of purgatory, the game gives you numerous score tallies and now ingeniously displays filling meters for achievements you’ve earned and are on the way to earning. This, coupled with the brilliant splatting headcount of ghoulish adversaries you’ve vanquished, means that you don’t ever feel like you’ve wasted your time. There are also global and friend leaderboards to keep you competitive and motivated.

When you get a bit more adept at handling yourself in the game, you’ll stop just struggling through and surviving, and you’ll start challenging yourself to earn a higher score with distant headshots and skilled play. It’s a wonderfully moreish gameplay loop which is more akin to the likes of Beat Saber or Audica, in some ways – and every bit as essential.

The base Quest version is impressive and significantly technically improved from its initial release, as Superbright have squeezed more performance from its modest host. The power of Quest 2, however, has presented an opportunity to introduce more nifty visual effects and geometry into the mix, and it’s remarkable what a difference it makes. There are additional background elements in the levels, new lighting, and layers of swirling fog. Architecture can now be seen stretching further into the distance. The Quest 2 version is not a top-to-bottom generational reworking but adds a slew of subtle but cumulatively substantial upgrades. These all add to the world-building and atmosphere – things that the game hardly ever lacked anyway. Truly striking.

There are very, very few niggles with the game. I’ve played the game on various platforms, and I’m not convinced the boss battles are as polished or pleasing as they should be, no matter how often I do them. Also, there’s one enemy type, creepy floating spectres, that are mildly reminiscent of the library ghost in Ghostbusters. These advance towards you through the scenery, and sometimes you will have no idea they are doing so during a flurried group confrontation, leading to a slightly unfair health loss every so often. [You can hear them coming! Ed.] I also find that the hitboxes for their glowing chest weak-points are slightly dubious – often an arrow will show as a near-as-dammit direct hit, and yet still they advance.

As far as criticism, that’s pretty much it. I’m really hoping Superbright don’t work too hard on improving the game any further. It would bring In Death: Unchained dangerously close to being 6DoF’s first 10, and I’ll have to do all this again.

In Death: Unchained is a distinctive, original and polished explorative archery game which is endlessly replayable and massively addictive. Through canny iteration by a talented dev, it is now a standout title on the Quest platform and an essential system-seller in its own right.

In Death: Unchained
TLDR : Summary
In Death: Unchained is a distinctive, original and polished explorative archery game which is endlessly replayable and massively addictive. Through canny iteration by a talented dev, it is now a standout title on the Quest platform and an essential system-seller in its own right.
User Rating2 Votes
8.5
Pros
Fantastic, addictive gameplay
Impressive graphics
Magnificent setting
Superb presentation and atmosphere
Superlative music and sound design
Cons
Boss battles are a bit lacking
Invisible git specters with dubious collision detection
9
Heavenly
Get it on the Oculus Store
In Death: Unchained