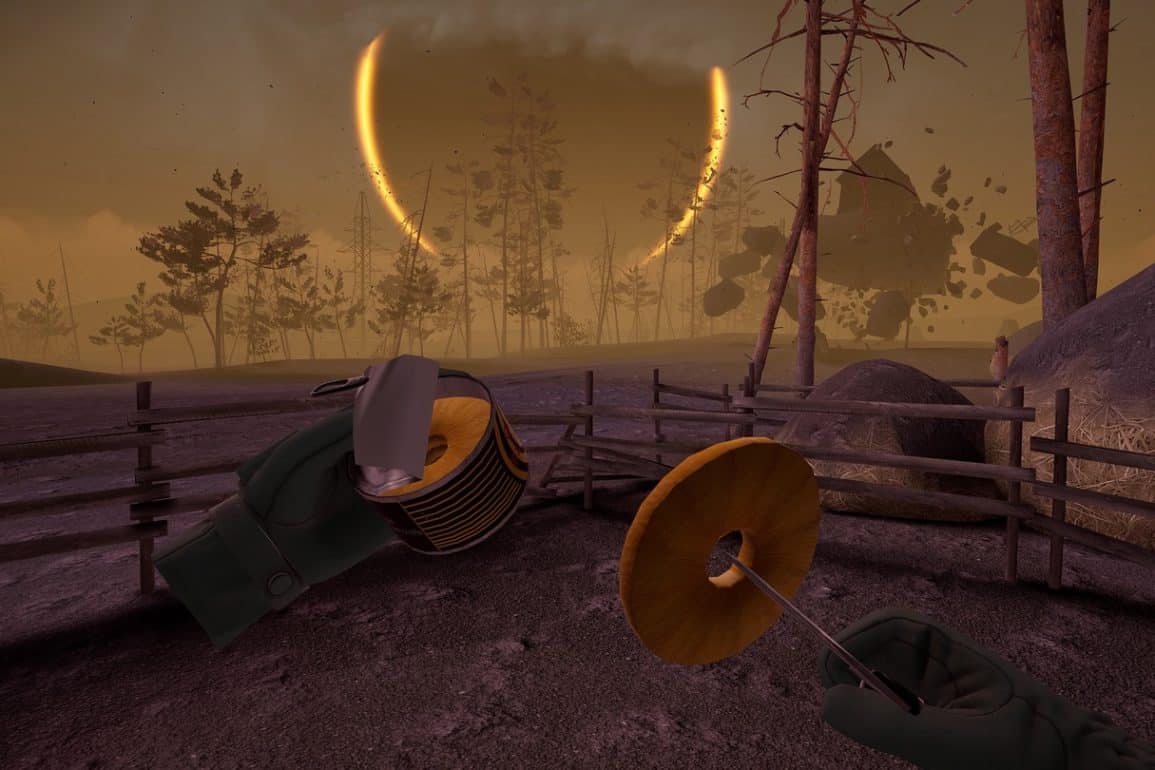 Into the Radius | Review 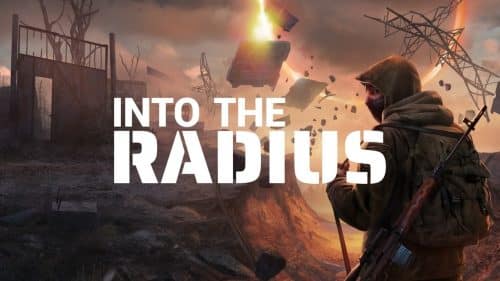 It hardly takes a perceptive or original reviewer to point out that Into the Radius is a pretty blatant attempt to transfer the delights of the beloved, long-dead S. T. A. L. K. E. R. series of PC games into VR without all that tedious mucking about with trying to obtain the IP. The setup is remarkably similar; in a near-future, post-apocalyptic Russia, desperate mercenaries roam the countryside, scavenging for supplies and stuff to sell. Weird glitchy anomalies blight the world, and dark things scurry from the corners. It’s a hell of a setting, for sure.

Will Into the Radius live up to it?

STALKING IS THE SINCEREST FORM OF FLATTERY

First impressions are not at all good. Menus are a bit basic and fiddly, and the tutorial is one of the most obnoxious and misleading introductions to any game. It took me two attempts to get past it, making the game look bare, unfinished, finicky and hard to play. The text seems poorly translated and is full of typos; some of the instructions obscure their intent. The tutorial’s slight taste of exploration and combat is unconvincing and dull. The review was writing itself – why is this game even bothering when the loot-combat-explore gameplay loop has been done so much better in The Walking Dead: Saints and Sinners?

When I limped past the tutorial section and found myself in the starting hub of the game proper, it hardly seemed any better. The opening mission, delivered via text on a computer interface, reads as deadly uninteresting, and the first taste of the open world made me save and exit until I was in a more patient mood. Nothing had clicked with me, and technically the game seemed a bit of a bust. So I left it for a couple of hours.

Before my next session in the game, I did a bit of research. Into the Radius has been out on PCVR for a while and has earned quite a following. After a bit of reading and some YouTube, I was surprised to find myself genuinely intrigued. The game had sold itself to me very badly. Thanks to the inept tutorial and janky first impressions, it blinded me to its ambition and potential. It mis-sold what it was trying to achieve. What I heard other players waxing lyrical about and watched them playing didn’t tally at all with what I’d seen of the Quest version, but the game seemed to have far more depth than it had shown me. So I went back in, started a fresh save, and met it halfway. Within twenty minutes, my opinion had changed completely.

What changed my mind was the way that the game handles stuff. The scavenging, arrangement and management of stuff is what the game is all about. Whether that’s the frantic scramble for remaining bullets in the middle of a firefight or the careful selection of gear and supplies for your next run, it’s all about the minutiae, inconvenience, and joy of stuff. When you’re introduced to the backpack in the tutorial, it seems like a low-effort and clunky version of superior efforts in other games (cough Walking Dead Saints and Sinners cough). Objects you store in it don’t arrange themselves nicely in bubbles and rows, and there aren’t any physics. They just freeze in place in there wherever you leave them.

You can not only stack objects but clip them through each other – it physically looks like a rucksack yet acts more like an object placement tool in the game engine itself.

It’s not slick, but spend a few minutes in the world, and you’ll love its freedom. There are plenty of other VR titles with backpack inventory management, but none of them replicates the actual feel of frantically sifting through a bag of miscellaneous crap, wishing you’d been more organised. It also brings finicky joy to the act of hunter-gathering. The player’s room in the game hub acts similarly to the backpack – stuff you place anywhere in that room stays there. Organise the shelves into neat piles of ammo, fill up empty ammo boxes with individual bullets, litter your bed with cigarette stubs and Red Bull cans… It’s your domain. The joy of hauling a bag full of spoils back home to sell or put on the shelves is rewarding and the right side of fiddly. If you’re like me and love faffing with the inventory in Resident Evil 4, you will adore this.

The tactile nature of Into the Radius extends to the weapons. Guns and even ammo clips degrade with use and can jam in a firefight if not appropriately maintained. Delightfully, maintenance is carried out manually at the workbench in your room. Pop a gun in the vice, spray it with non-copyright-infringing off-brand WD40, and use a toothbrush to clean it. Clear the barrel using a rod and pieces of toilet tissue you tear off a roll. As the game progresses, you’ll unlock weapon upgrades and accessories and get even more stuff to do stuff with. When you head out into the wilderness, you’ll do it with sparkly, well-looked-after weapons, hand-picked supplies from your stash, and a sense of ownership and investment in the entire experience, which other survival/exploration games lack.

So what of the world you’ll be trying to survive in? It’s creepier and more surreal than some other games of this ilk. I won’t give any plot details away or ruin the exploration for you, but suffice to say that the aftermath of whatever happened has left the landscape a twisted, broken place, populated by brittle statue memories of people and unsettling shadow zombies. It’s not radiation, we’re told, and the scientific gives way to the supernatural. It all still feels grounded, though, thanks to some good scene-setting.

Whilst by this point, the post-apocalyptic Russian setting is in danger of becoming a familiar trope, the distorted reality of Into the Radius presents a slightly fresher take on it. Yes, there are Soviet trucks and warehouses, and we’ve seen most of it before, but twisted train tracks spiralling into the sky and surreal parodies of architecture litter the land. It’s not just that something bad has happened here, but something weird. And that’s refreshing. The sombre tone of the sparse, ethereal music is entirely fitting, and the air of unease and dread the game generates is exceptionally effective. It’s just you, your guns, and your cereal bars against the world. Exploration is a stressful but rewarding affair and an addictive one. There’s some lovely design here, and the curious are rewarded with stuff and plenty of action.

By Andrew Anderson
In Apps

It’s a pity that the game isn’t all it could be on a technical level. The graphics are, by and large, dogshit. There’s lots of pop-in and uninteresting texture work, and the colour palette is all over the shop. It’s not as if this is all to do with the downgrade from PC, either – it’s not a pretty game even on Steam, so by the time it reaches the Quest, it’s downright ugly. It gets away with it, and there are enough little touches here and there to carry it. But if you want something to wow the crowd, look elsewhere. The poor English and typos in the menus are pretty aggravating, too.

The sound effects, music and atmosphere are excellent, but Into the Radius makes the same mistake as Red Matter 2… Russian setting, poor American voice acting. Set a tone and give us some accents, please. It doesn’t help that the cast sound like they’re all reading for Family Guy rather than a bleak survival experience.

More harmful to the game is there’s a lot of glitchy jank. All objects feel weightless, and opening doors, cupboards and drawers feels frustratingly like wrangling paper; it sometimes feels like being a toddler. Your hands get caught on stuff, and there’s generally too much clipping and odd physics for it to feel like a true class act.

The more you play, the less of an issue all of this will be, though. It finds different ways to be immersive. If I had one major complaint about the gameplay, it is that, although combat is usually satisfying, the stealth seems non-existent, despite the presence of silencers and sniper rifles. Bad sods always seem to know I’m there, so everything becomes a straight fight. Your mileage may vary.

I’M GETTING A STALK ON

It turns out that Into the Radius is quite a slow burn, and that is very deliberate. Much like the S. T. A. L. K. E. R. games it so clearly adores, it doesn’t go out of its way to integrate the player into the game world, and that’s commendable if you’re the right sort of player. You’ll need to be patient and methodical and buy into the game’s systems to get the best out of it. There are all sorts of customisation options to make the game as brutal and survivalist as possible. There are hours and hours of gameplay here, even with standard difficulty. Whilst the missions often boil down to simple fetch quests, the experience is very much what you make it. It’s clear the team have a strong vision for the game, and following the game’s progress on Steam, it seems that the title is constantly being tweaked, improved and added to. I’ve no doubt that if this trend continues on the Quest, we’ll be looking at one of the best games on the system.

Into the Radius
TLDR : Summary
It's certainly not a game for those new to VR, but once you make it past the tutorial, you'll find a captivating, unique and atmospheric title awaits. Technically a bit deficient and an acquired taste - but if it gets you, you'll stay got.
Concept
8.5
Gameplay
8
Graphics
5
Audio
8
Longevity
7
User Rating0 Votes
0
Pros
Great Atmosphere
Great Inventory & Gun Mechanics
Cons
Offputting Tutorial
Spelling mistakes, poor translations, etc.
8
Stuffed
Get it on the Meta Store
Into the Radius