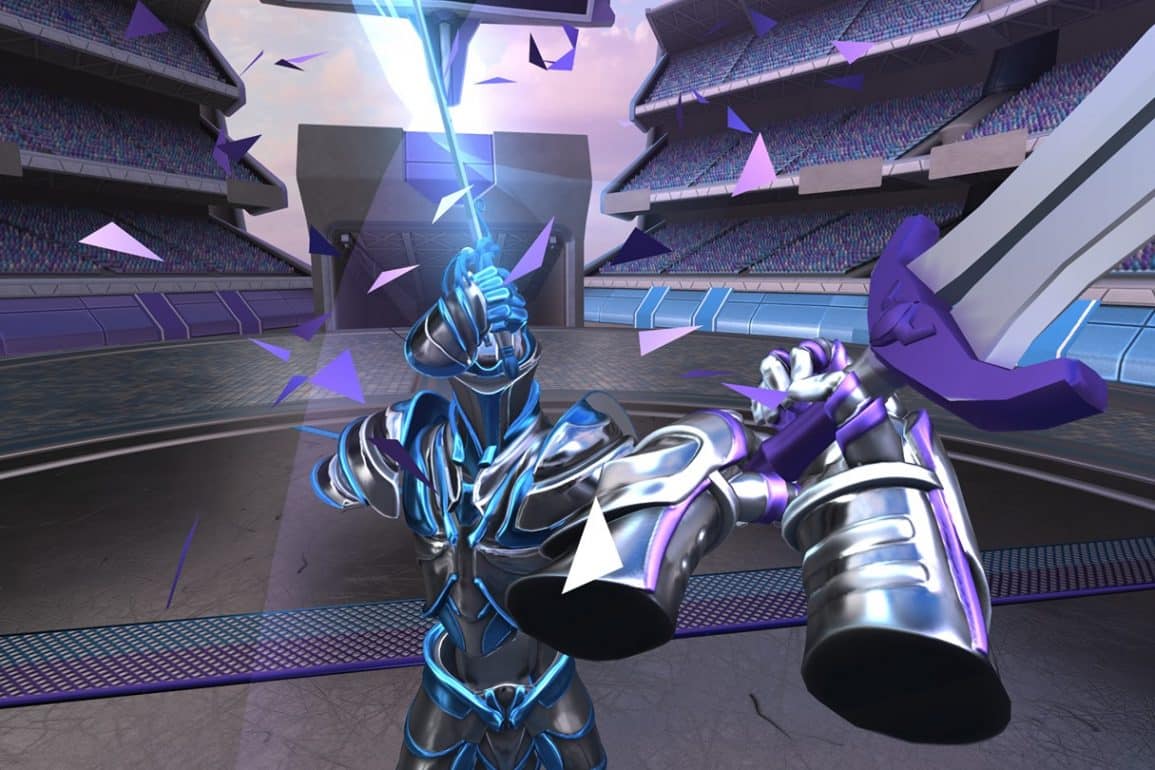 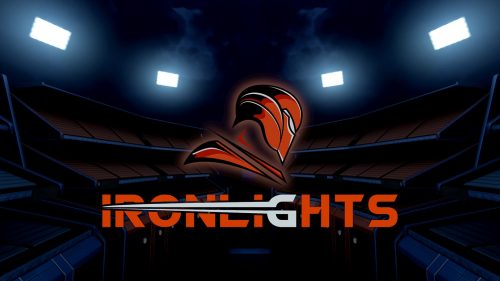 We first heard about Ironlights during the 2nd half of 2019. Promising melee combat in untethered VR, the developer showed off an already working build and put it on Kickstarter to get extra funding. Although the game was already functional, the additional funding was needed to add more assets and polish it up so that it could become the game it is today. While waiting for its release, I was somewhat hopeful that it would do for VR what For Honor did for melee combat on consoles. For Honor provided a close-quarters combat experience that focused on skill and execution, where you had to both outthink and outpace your opponent.

When a round of combat starts, you find yourself on your half of a large platform. The platform moves in space until it comes to a satisfying thud as it meets its other half in the middle of a large arena, surrounded by a large, minimally rendered crowd. This is your battle arena, and you better get used to it, because apart from some minor variations, it’s all you’ve got. You find yourself face to face with your enemy or enemies, and your weapons come flying across the arena, to land in your hands. A large screen announces the combatants, there’s a brief countdown, and you’re off to battle.

In Theory, It’s As Sharp As Its Blades

Ironlights brings many innovations to melee combats in virtual reality, but how well they work out is questionable. The ideas are bold, and there are several of them. This is not, nor was it meant to be, a casual slashing game like Ninja Legends, for example.

Everything happens in relative slow-motion, which is to say that even if you move quickly, your character does not, and it’ll take time for your virtual arms to catch up to your real ones. This means that to be in sync with your virtual presence, you need to purposely slow down all your movements. This slowing down is designed to make the melee combat more strategic, so that your actions are a little more considered, your movement arcs more purposeful. It’s supposed to elevate the combat beyond the usual flailing of arms that plagues so many virtual simulations of real combat.

Your weapon, or weapons, are physical in appearance, but made up of energy, and dissipate after every swing or deflection, becoming ghostly and ineffectual. They can be recharged and made virtually present once again, by swinging them behind your back. This is clearly meant, once again, to make the combat more thoughtful, to make you try to make every swing or parry count, and to bring some back and forth flow to the battle.

Who Brought Lasers to This Sword-Fight?

Ironlights also allows you to ‘shoot’ energy arcs or energy balls from your weapons. With some weapons, you can charge some energy with your trigger and ‘throw’ it at your enemy. This can be quite effective, because although your enemy can block your projectile attacks, just as they can parry your weapons, the energy attacks can cover more surface area, and be harder to block.

Although the arena is essentially the same, you do have various classes of fighters. You can play as a Knight, relatively slow, but wielding a heavy two-handed broadsword. You can be a Duelist, far more nimble, and armed with a rapier. You can be a Monk armed with a staff! You can be a Ninja, wielding two katars! You can also choose to be a Crusader, armed with a flail and a shield. As expected, each class has its strengths and weaknesses.

These classes do add quite a bit of variety to the combat, and mastering each one is undoubtedly a challenge that Ironlights enthusiasts will relish. There’s also a plethora of customization options available for each avatar. You can customize your suit of armor; you can change its design, you can change its colors, and its highlights, and the models, crowdfunded by the game’s Kickstarter campaign, are fantastic.

The Chink In The Armor

Unfortunately, for a game that showed so much promise, and that’s clearly been designed with thoughtful mechanics, Ironlights doesn’t work out quite as well as it should. The core conceit of slowing down your character’s movement takes getting used to, and is never really that satisfying. Most of the time, you either feel you’re moving slower than you need to be, or you’re moving too fast, and waiting for the avatar to catch up. The differences in speed between the various classes also creates balancing issues, since some characters are very difficult to block for others. Despite the developer’s best intentions, you will, inevitably, flail around with your arms, and, unfortunately, more often than not, and owing more to class differences than to inherent skill, it will work quite well against other players.

Oddly enough, the game isn’t a free-for-all between the combatants, and is instead, played out almost in turns. You’re all placed a few steps away from each other, and you push a button and pull on your chosen enemy to move towards him. Then you get to slash away at them while they can only attempt to parry. You do this briefly, then return to your position, and then they get to move towards you, and they get to slash at you while you do your best to parry. You keep taking turns like this, until one of you, finally, runs out of energy, and is struck a killing blow.

It has to be said, the single-player campaign is, actually, very challenging. If that’s your main interest in Ironlights, then you can avoid randomly messy battles, discipline yourself so that your movements really are aligned to the game’s design principles, and create some of the melee nirvana that initially brought you to the game.

That Is One Shiny Suit

Ironlight’s graphics are the very definition of a mixed bag. The various armor designs (all you really see of the characters, since they are, essentially, floating armors with no flesh underneath) are exquisite and beautiful to look at it, the weapon models are much simpler, but also satisfying to look at and wield. The environmental graphics are a massive disappointment, relying mostly on one arena design, varied mainly through colors, and, as mentioned, a very minimally rendered crowd. More environments would have added substantial variety to the game, perhaps more will be added later, but for now, this is all we’ve got. The menu and interface graphics are functional and clean, but nothing to write home about.

The sound effects are functional, but the fact that they cater to ‘energy’ weapons takes away from the possible heft of hearing more physical weapons coming into contact with each other. There’s not much clanking of swords and shields going on here. All the audio cues are softened. This may suit the nature of the weapons, but it’s far less satisfying to hear than melee combat should be.

What Have Ye Wrought?

Whereas a lot of thought went into the mechanics, some of the choices are very questionable and create an uneven and unsatisfying experience. Why can I shoot energy balls or energy arms at my enemy? The inclusion of these energy attacks seems to dilute the focus of the main game mechanics, taking the focus away from all the combat that the mechanics were initially designed to serve. Why does the combat itself happen in turns? Why am I either defending – if the enemy has launched an attack on me, or only attacking – if I’ve launched an attack on them? Why make us take turns when the whole point of slowing the action down was to allow for some combat flow to take place? Why can’t the natural tide of battle determine who’s attacking and who’s defending?

Why spend all the crowdfunding on new suits of armor, impressive though they might be, rather than on new and varied combat arenas and environments, considering they are what we’re actually seeing most of the time. Sure, it’s nice to know that my friend is seeing my spiffy new armor while I’m swinging my sword at him, but what about some eye candy for me?

Having said that, Ironlights goes above and beyond when it comes to its replay engine. Aside from allowing you a great deal of control over the camera, you can save replays of your battles to watch at will. You can even make GIFS out of them and export those. For gamers who really get into the game, this alone could seriously add some mileage to the game.

Back To The Forge, I Bid Thee!

Despite all the good intentions seen throughout the design and development of Ironlights, it isn’t yet what it sought to become. Having said that, the developer has made it quite clear that there’s a roadmap for post-release development, so it may still achieve greatness.

Ironlights
TLDR : Summary
Despite some innovative game mechanics designed to deliver thoughtful melee combat to your VR headset, Ironlights suffers in the transition from theory to practice. The gameplay mechanics fumble, the graphics are uneven, and the audio is at best, functional, and at worse, annoying. Melee enthusiasts thirsty for VR melee will enjoy it, but for most people, it's hard to recommend wholeheartedly.
Concept
7.5
Gameplay
5
Graphics
6.5
Audio
4
Longevity
6
User Rating5 Votes
8.2
Pros
Unique mechanics
Great armor graphics
Challenging single-player campaign
Great added features
Cons
Mechanics don't always work
Lack of environmental diversity
Annoying audio
6
Blunt
Ironlights
Get it on the Oculus Store