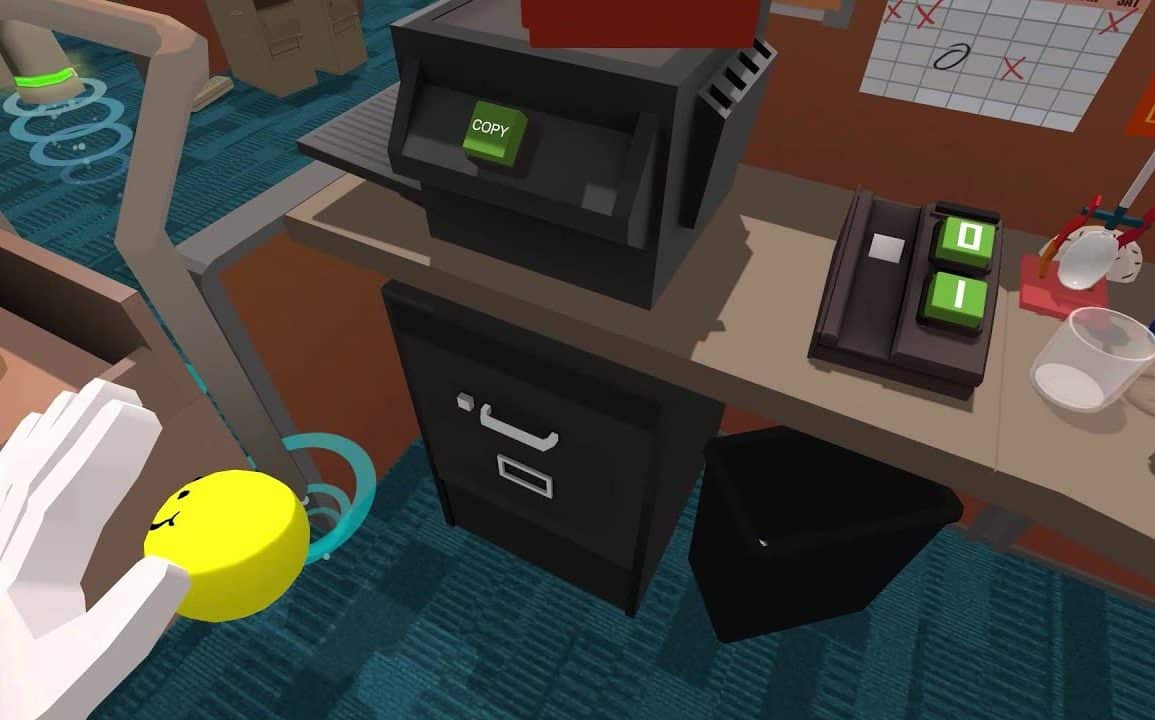 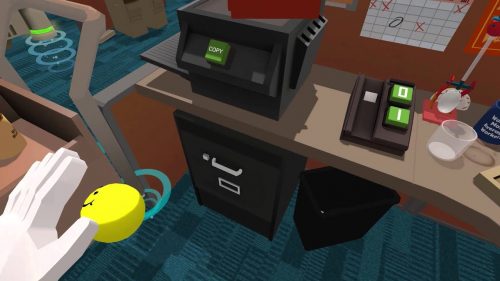 Automation is becoming an increasingly important societal issue around the world, increasing the efficiency and decreasing costs of production of goods, while also having the consequence displacing the workers that had once produced those goods.  Job Simulator takes place in a future where all work has been taken over by this technology but does not necessarily explore the politics of this issue or offer solutions to its accompanying challenges.  Instead, however, Job Simulator uses AI and automation as a lens through which to parody the modern workplace, creating a very relatable and funny story built around tropes of the modern workplace.

In Job Simulator, you play as a human entering a simulated museum of what work was like before automation had taken over, or at least what the AI imagines human jobs to have been.  There are four jobs to choose from, including office worker, gourmet chef, convenience store clerk, and auto mechanic.  Once you select a job, you complete a series of tasks related to that job, using the Oculus Touch controllers to handle and interact with objects in the environment.

Chef? Mechanic? You Do It All!

The environments are cleverly laid out, placing all necessary objects within convenient reach from wherever you are standing.  Stations in some of the environments have multiple selectable modes that will change the function of that station.  For example, in the gourmet chef stage, the refrigerator can be swapped with a pantry by the use of a lever, and the sink can be changed to a sandwich prep area.  This clever use of space gives a nice room-scale feel to the game, while not requiring a lot of space in which to play the game.  The flexibility can get somewhat annoying in later jobs, however, as the frequency in which these stations need to be changed increases, and there are many more options from which to choose.  The Auto Mechanic stage requires constant toggling of two different stations to make the required fixes to the cars the robotic characters bring to you.  However, the tasks that the game requires you to perform all revolve around the manipulation of objects in the environment and can sometimes start to become tedious late in each stage.

Using the Oculus Touch controllers to interact with the world behaves as expected and works exactly like handling objects in the Quest First Steps tutorial.  There are a few surprising interactions with some of the objects in the world, though.  Pulling the trigger button while holding a stapler shoots staples like a gun, and a copier can be used to copy any object in the area, not just images on paper.  However, throughout my playtime, I did encounter some instances of the controllers losing tracking, causing my virtual hands to float in midair in an unexpected position.  Even more jarring, at one point the headset itself seemed to lose its tracking, leaving me feeling like there was an earthquake, but a quick restart of the software solved that problem.

While the audio in the game is sparse, there is a good amount of well-voiced dialogue from the robot characters.  There is not much of a soundtrack to the game, but there are a few music CDs hidden in the world that can be popped into in-game CD players to listen to the original songs on them.  Not every joke in Job Simulator is a winner, but enough of the humor lands to enhance the enjoyability of the gameplay.  The jokes are mostly based around the world being a computer’s interpretation of the jobs humans used to perform, and this concept remains strong throughout the game. For example, many of the books and objects throughout the world contain readable cover texts that contain extra jokes for players that care to inspect them, and the interactions with some objects also tie into this concept, such as a computer whose only keys are ‘0’ and ‘1’.  These gags are delivered with a crisp, cartoony graphical style that pops on the Oculus Quest, and enhances the humor of the game, especially in its more slapstick moments.

Once Job Simulator has been completed, there is a bit of replay value from some additional modifiers that change up the experience.  There is also an infinite score-based mode in Infinite Overtime mode, which changes some of the layouts of the game’s areas, and gives you a string of randomly generated objectives, tracking the number you complete.  Even with these modes, the replay potential is limited, but this game is perfect for friends and family new to VR, so Job Simulator will likely have some additional value as a “show off” game.

Overall, Job Simulator is an enjoyable experience, but its brief length and somewhat low replay value limit its lasting appeal.  The humor mostly works and adds a lot of enjoyment to a game that mostly revolves around simple manipulation of in-game objects.  Despite its shortcomings, Job Simulator is a perfect game for the Oculus Quest’s launch, and, like Beat Saber or Racket: Nx, it’s a great pick-up-and-play experience for players new to virtual reality.