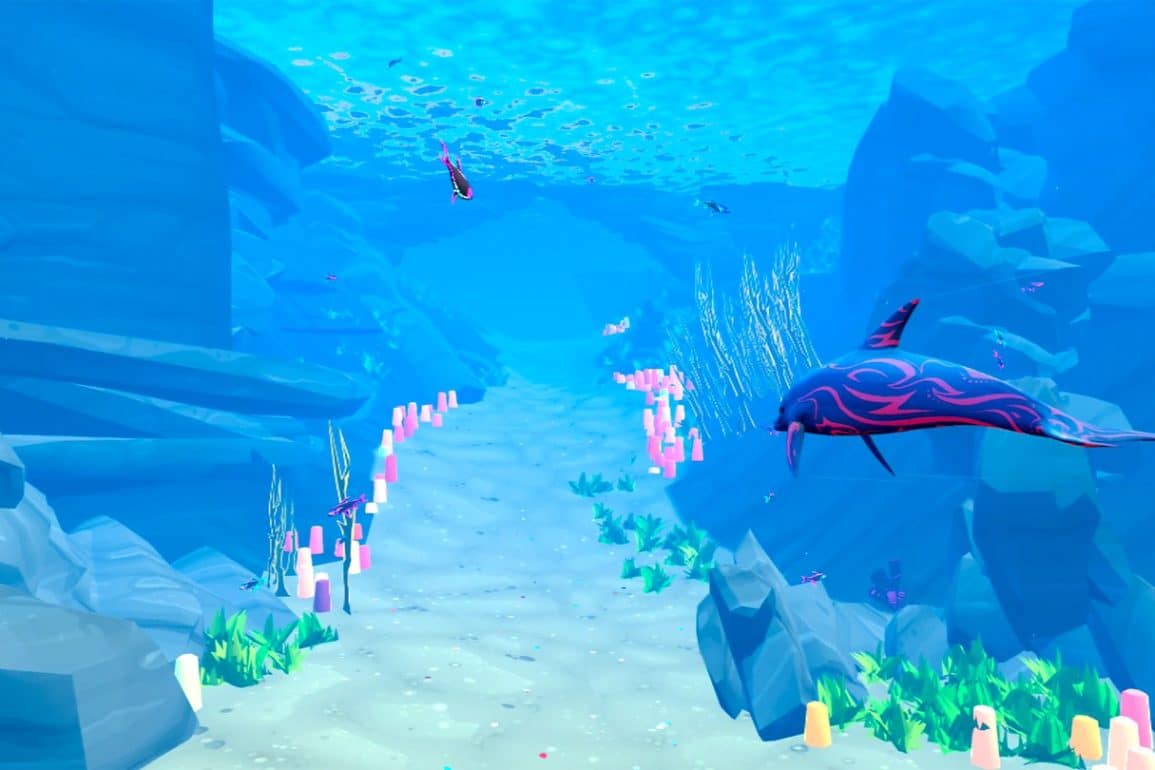 Ecco? Are you there?! 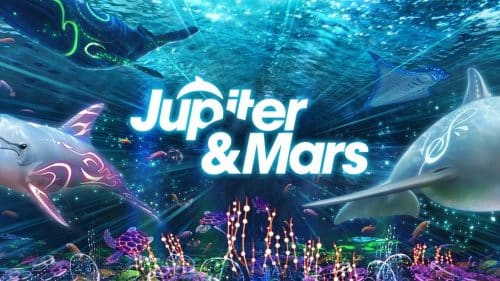 Jupiter & Mars is the latest in the seemingly never-ending slew of games to arrive on the Quest from PlayStation VR. Originally launched on that platform in April of 2019, it has since picked up the sub-title ‘Definitive Version’ at some point during its protracted journey. The context of this isn’t immediately clear from the marketing materials – so let’s find out for ourselves.

Jupiter & Mars puts you in control of a pair of Dolphins in a post-apocalyptic undersea world still recovering from the damage wrought by a now-extinct mankind. From the VR staple first-person perspective, with head tracking providing directional control, you play as Neptune, a dolphin who can emit a sonic burst for environmental interaction and a sonar pulse to help locate objects and objectives.

Nearby swims Jupiter, who has the power to headbutt stuff really hard. He undertakes this duty at your behest to open pathways, destroy rocks, and open clamshells wherein a pointless collectable might lie.

Gameplay is designed to be relaxing, exploratory, and serene and therefore the stakes are usually low and the pace sedate.

You chirp out a sonar to find an objective, swim to it, and complete the task that is often given to you by a fellow sea creature.

Collectables litter the environment and there are occasionally squids to – I think – eat, but as far as structure goes, it’s so far – so Ecco…

It’s when you shine the light of the Dreamcast entry of the Ecco series on Jupiter & Mars that it really starts to fall apart.

Ecco, and many other games from that turn of the century era, proved that you don’t need 4 billion polygons to be a great-looking game.

Art design trumps technological restrictions every time – but despite all the creatures in this marine world having evolved bright patterns in various neon shades, the world remains murky thanks to jagged, low-resolution textures, simplistic design, and endless clipping through the environment.

While the sound effects are similarly rudimentary, the audio does fare slightly better on the musical front, with a small selection of tunes that change as you progress further into the game and deeper into the sea. Unfortunately, even these compositions have rather a basic feel and rarely provide the atmosphere they appear to be striving for.

The more fundamental issues with this game come from a wide variety of sources, but front and centre is the complete lack of variation of pace.

While Jupiter darts around freely until you call him to dash off and headbutt a rock, clam, or wall, Neptune, under your control, moves as if she’s suffering from a bad case of fin-rot. Her sub-sea-cucumber pace makes the game both a literal and a figurative slog.

To come back to the Ecco comparison, it was a game criticised at the time for not always making clear where the next objective was. Jupiter & Mars attempts to solve this with the sonar, a gimmick that immediately reveals everything with which you can interact (essentially, headbutt or shout at) in the immediate vicinity.

This might sound like a good idea, but it instantly robs the game of the ‘explorative’ nature that could have both been its biggest asset and added considerably to the 4 or so hours of game time on offer.

This is an 11-quid game, though, so that’s not an offensively small amount of content for the money – and to be fair it does feel like it lasts a lot longer than that… just, not in a good way.

A load of Pollocks

Jupiter & Mars can’t shake the spectre of a game that came out over 20 years ago. Everything about it is too similar to Ecco: Defender of the Future to dodge comparison.

Sega’s Dreamcast effort may not have been in VR, but it was faster, better looking, better sounding, and – ultimately – a lot more fun to play.

Saving the marine world from the damage wrought by man is an admiral set-up for a game, but when all it actually amounts to is controlling the world’s slowest dolphins as you wander about an undersea world dulled by poor textures from a bad PS1 emulator, headbutting rocks for some reason, and accompanied by music made by someone who once heard half of an Enya album…then all the good intentions in the world can’t save it.

Jupiter & Mars
TLDR : Summary
Jupiter and Mars is a homage to Ecco: Defender of the Future - as created by someone who believed it should be made worse in every conceivable way.
Concept
6
Gameplay
4
Graphics
4
Audio
5
Longevity
6
User Rating0 Votes
0
Pros
Admirable sentiment
Cons
Rudimentary Audio Visual
Glacial pace
4.5
Soggy
Get it on the Meta Store
Jupiter & Mars