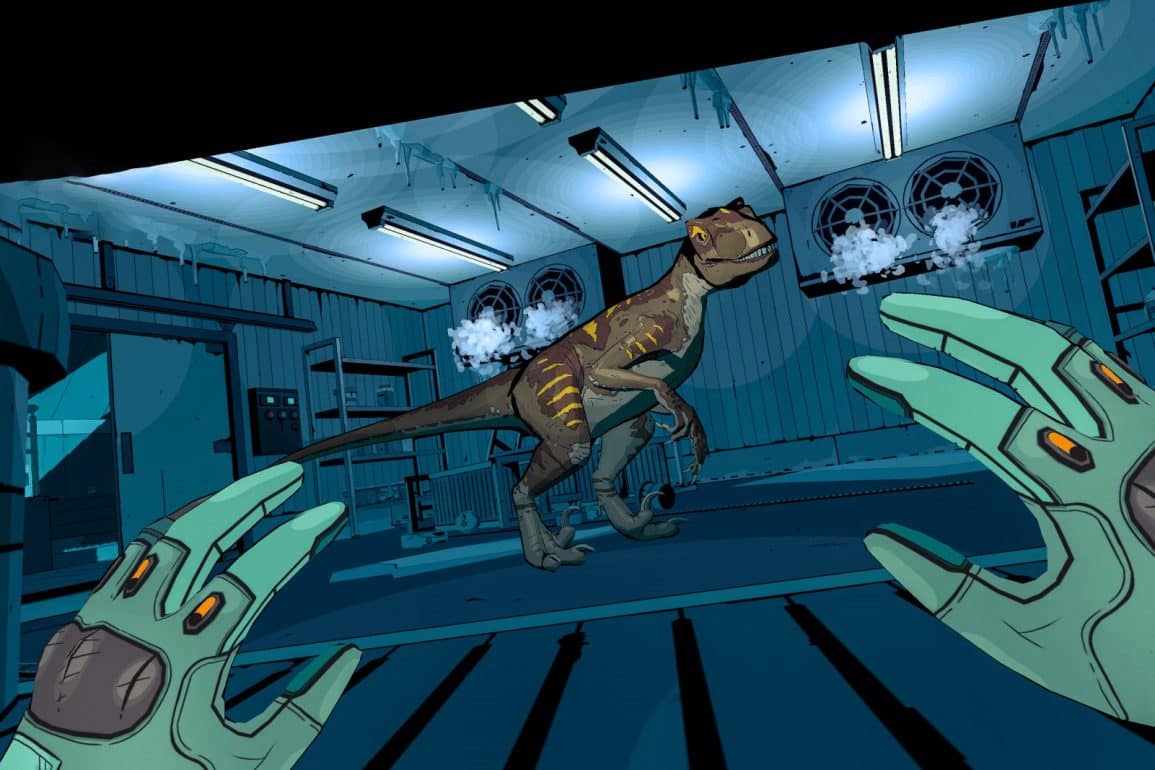 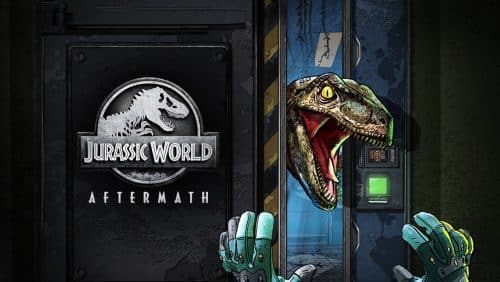 Jurassic World Aftermath is the latest videogame in a number of movie tie-ins. Like the later entries in the film series itself, most have eluded critical success but are pretty popular nonetheless. Aftermath has arrived on the Oculus Quest just in time for Christmas. Will dino-fans be pleased to find this skittering around their festive virtual tree? Or will it chew up and spit out their hopes like a T-Rex chowing down on an occupied toilet?

Jurassic World Aftermath is a combat-free narrative first-person game with light stealth elements. It’s set in-between the events of the films Jurassic World and Fallen Kingdom, apparently, and features characters old and new. At the outset of Aftermath, the player is trapped as their plane crashes into the dinosaur-replicating facility on Isla Nublar after being attacked by inquisitive pteranodons. At the facility, in the grand tradition, things have gone Terribly WrongTM. Equipped only with a radio, the player must follow the orders of Dr Mia Everett to get some of the besieged facility’s systems back up and running and escape.

The first impressions of Jurassic World Aftermath are mixed. Regular readers might have picked up that I’m pretty annoyed by bad loading screens in VR. It hardly bodes well for the developer’s treatment of the player when the first impression you have of a game is glitchy and unpleasant. Jurassic World Aftermath is an awful example, juddering like an Oculus Link game with low bandwidth, complete with stuttering black borders. Once in the menu, there’s a rather prominent button that says ‘BUY EXPANSION’, a store link for content not even available yet. This scurrilous practice can also be found in the recent Star Wars: Tales From the Galaxy’s Edge, and I wish devs would just sodding stop it. It’s cheap and makes the consumer feel they’ve bought something incomplete (at significant expense) before they have even had a chance to play the game itself. As it happens, it’s also an exercise in pure hubris, because I can’t imagine anyone wanting more of this, if and when they finish it.

Starting a new game, you’re given a little square environment to wander round in while you set and test your movement and comfort preferences. This is a lovely touch and one which more VR titles should adopt. To me, the default preset felt overly weighted towards people who aren’t very comfortable with first-person movement in VR. The vignetting when moving around is so extreme it’s like peering out a small hole in a cardboard box. Fiddle around with the settings and you should find something to suit you. There’s no teleportation, however, and the three speeds for smooth turning should be relabelled ‘fast’ ‘too fast’ and ‘ceiling fan’, but they’re somewhat accommodating.

When in the game proper, the graphics, sound and music are impressive. I really enjoy a good cel-shaded art-style, and it’s beautifully done here; visually, it’s reminiscent of, and on a similar level of quality to, the fantastic Lies Beneath. It’s stylish and looks consistent, and also allows the Quest a little room to breathe in terms of graphics processing. This means the game has impressive animations and a good eye for a lovely vista or two.

It’s a shame, then, that Jurassic World Aftermath highlights a lot of its worst features in the opening scene. You’re trapped in the cargo hold of the aforementioned plane – a rectangular room – and can’t interact with anything until you’re instructed to do so by the intercom. There’s some well-acted waffle to listen to by way of exposition, and you’re left with little to do but look out the windows. This throws up one of the first real immersion-breakers about the game. When your head goes outside the boundaries of what the game thinks is acceptable, the display blacks out until you put your head back in the ‘right’ place. It’s tremendously aggravating and unfriendly, especially as the game presents the player with nothing to do at this point but look out the windows, then makes you feel you’ve broken it by trying to do just that. It’s a horrible practice; it’s up to the game to accommodate the player, not the other way round. It only gets worse later in the game when navigating small spaces like air vents.

Just as annoying is the lack of interactivity in the environment. In the starting location there’s a desk containing two items which are clearly meant to be picked up – but the game ghosts you through them until you’re told to pick them up, and where to use them.

This is a pattern that repeats through the whole game; switches, buttons, doors and items that can be seen but not used until the woman on the radio says to use them. It’s patronising, linear and suffocating, and it’s a bore.

After the intro, the game settles into a pattern of incredibly mild puzzling and basic stealth. The best way to describe it is Fisher-Price Alien Isolation. Hide in lockers and under desks from velociraptors (and later, other dino-sods which have the Latin name spittus gittus). Use your computer glove to hack systems with basic mini-games. Listen to the story conveyed via radio. The audio is thankfully well-written and performed, and it’s a genuine pleasure to hear Jeff Goldblum crop up in voice-over. It’s continuously undermined, though, by the lack of interest in the environments, despite the beautiful dinosaurs and attractive visuals.

For all the excellent presentation, there’s just a lack of imagination to the actual game. If this is your first time in VR, you might get off on the novelty of turning wheels and pressing buttons. However, Nintendo did this kind of stuff on the Wii without the benefits of VR. Behind such novelty lies very little of substance. Quite apart from anything else, I’m incredulous that the devs thought that anyone would find Simon Says interesting as a hacking mini-game. I wasn’t expecting Myst levels of intrigue and puzzle-solving, but this stuff is just going through the motions.

There’s also a distinct lack of threat. The velociraptors are terrifying when first encountered, and it’s a neat idea to try channel the Alien: Isolation trick of getting you to shiver in a locker while your scaly pursuer leers in through the slits, almost making eye-contact. But when they catch you, the game freeze-frames as they leap at you and the screen goes red. Load a checkpoint and carry on. There’s not even a grisly chomping sound effect to feed the imagination. Whilst being a family film, the original Jurassic Park did not shirk from showing some dino-horror. It’s a bit weird that Jurassic World Aftermath seems to be going for a U rating.

It’s a rum do that for all its high production values in some areas, Jurassic World Aftermath is such a forgettable affair. I’ve no doubt that if you love the films, then you might get more out of the experience than me, and you can supplement the score I’ve given it with a point or two. It’s the modern equivalent of one of the nice-enough-but-bland licensed platformers that were two-a-penny on the 16-bit consoles in the 90s. It won’t linger in mind at all after you’ve switched your Quest off. You’ll get just longer than the 2-hour refund window out of it if you stick with it, and there’s little reason to replay even with the carrot of the (paid) DLC coming next year. It aims low and ultimately frustrates.

Jurassic World Aftermath
TLDR : Summary
Jurassic World Aftermath is a polished, good-looking title which is faithful to the source material and may please fans and those new to VR. However, the unambitious design and basic gameplay mean that the game ultimately strains to hold interest, even given the comparatively short running time.
Concept
4
Gameplay
4
Graphics
9
Audio
8
Longevity
4
User Rating1 Vote
8
Pros
Distinctive and successful art style
Great audio and soundtrack
Dinosaurs
Jeff Goldblum
Cons
Disappointingly basic and limited
Blackout boundaries are maddening
Lack of palpable threat or consequence
Incessant hand-holding
5
Prehistoric
Get it on the Oculus Store
Jurassic World Aftermath