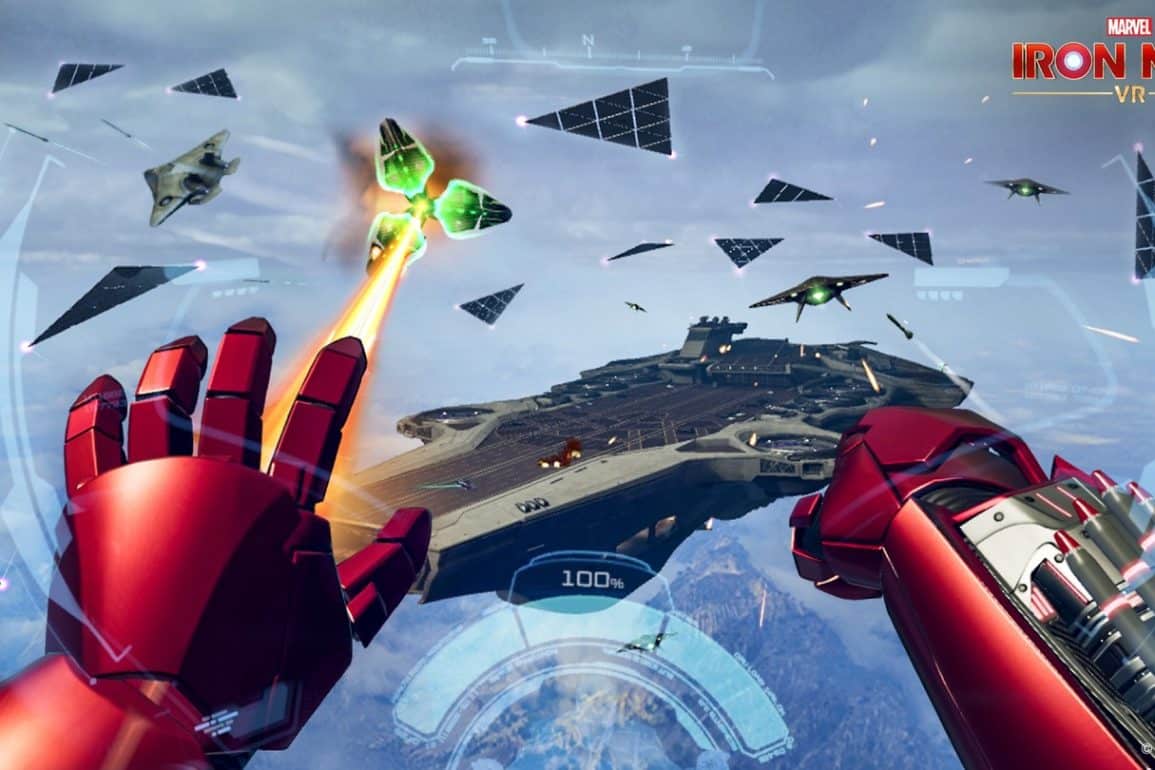 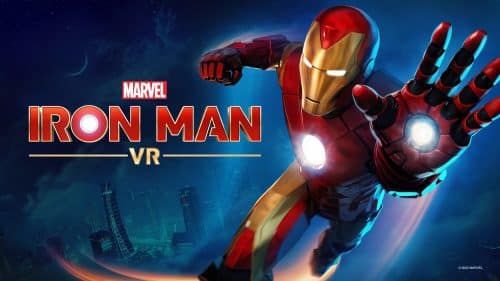 Have you ever dreamed of being a superhero? Ever wondered what it would be like to don the mantle of Earth’s mightiest heroes and soar through the skies fighting the worst the world can throw at you? Well, you’re not the only one. The good news is that you may be in for a treat because Meta-owned developers Camouflaj have somehow brought their hit 2020 PSVR exclusive, Marvel’s Iron Man VR, to the humble Quest 2.

Forgive me for being so forward, but it’s brilliant.

Before we begin the review properly, allow me to provide some context. I don’t have a PlayStation, and I’ve never played the PSVR original. In fact, when I first saw it released, I thought it looked a bit naff and didn’t pay any attention to it. As such, I have no basis for a port comparison, and I am reviewing this as a Quest 2 game, irrespective of its heritage. Now, with that out of the way, let me tell you why my stint as Iron Man is one of the coolest things I’ve done in VR…

Marvel’s Iron Man VR is a story-driven first-person action game that sees the player (unsurprisingly) take on the role of the titular superhero, Iron Man. The game begins as Tony Stark, Iron Man’s arrogantly debonair alter-ego, takes the stage to give a speech, regaling a shadowy audience with an account of a recent adventure. As he begins to tell his story, the game shifts and the player embodies the Stark of the past, allowing you to take over the action and live out the story as it unfolds.

It is an effective and engaging narrative device that artfully portrays what is ultimately a well-written comic book adventure. Well-paced and well-performed, the story offers exactly enough intrigue and nuance to keep you entertained without losing focus on the action. My only complaint is that the retrospective narrative, coupled with a foreshadowing preamble at the start of each chapter, means that very few surprises are in store as you progress.

That said, the fact that you know where the story is going has almost no impact on how successful it is in engrossing you. It’s a testament to how well the gameplay and storytelling are interwoven into the overall presentation and feel of the game that each new level remains as exciting as the last.

I AM Iron Man

As great as the narrative components of Iron Man VR are, the real highlight here is the action-packed gameplay.

Camouflaj (whose previous outing Republique VR we reviewed when it came out) have done an amazing job of realizing the fantasy of embodying one of the world’s most iconic superheroes. From the intuitive movement system to the varied combat options and the incredibly well-thought-out level designs, every element of Iron Man VR’s gameplay offers the ultimate power fantasy. At the risk of gushing this early in the piece, the chance to really BE Iron Man is one of the most thrilling, addictive, and innovative experiences I’ve ever had in VR.

Frankly, I fucking LOVE IT.

The flying in Iron Man VR does take a little getting used to at first, but thanks to a responsive and intuitive control system, it quickly becomes reflexive. As you become more confident in your abilities, you will start noticing little details in the level designs that allow you to raise the action to a whole new level. Within no time, things like flying at breakneck speed through improbably small gaps only to circle behind your enemies and blast them out of the skies become second nature.

The weapons systems at your disposal can initially feel a bit confusing, but this is a natural part of coming to grips with piloting the Iron Man suit. Flying, punching, and shooting all use hand gestures or controller buttons, so getting to grips with switching between them can take some time to get into muscle memory. Once you get used to the controls, though, Iron Man VR offers an exhilarating combat experience unlike anything else available on the Quest.

Shooting with your palms outstretched blasts the iconic Iron Man repulsors. Point forwards with your palm downward, and you access auxiliary weapons, like a barrage of heat-seeking missiles or cluster bombs. See a land-based target in need of obliterating? Charge your fists and punch downwards to slam to the ground with shattering force. I defy you to do this without putting yourself in that iconic “heroes landing” pose.

For many gamers, the big question with a single-player campaign like this will be “How long is it?” Although that is a valid question, the game’s campaign is only part of what is offered here. Before I can address that question, I will admit that I did not time my play through.

Don’t worry, I am appropriately chagrined.

With that caveat in mind, I can confidently say that playing on normal difficulty, I finished the campaign in around 4-5 hours. That was without dying, without playing the flight trials or combat missions, and absolutely no time spent exploring the interactive elements of Tony Stark’s well-appointed Malibu home. It would be fair to think that someone playing at a slower pace or at higher difficulty levels could easily stretch the experience out for at least another hour, if not more.

What I can confirm, however, is that this by no means implies that my time with Iron Man ended at the 5-hour mark.

COME FLY WITH ME

In addition to the 10 (and a bit) mission campaign, there are 10 “Flight Challenges”, which are essentially time trial races around tracks set in the game’s core locations. There are also 5 “Combat Trials” – timed combat challenges that task the player with taking down 5 increasingly difficult waves of enemies as quickly as possible. For me at least, this is where the best fun can be had.

As much as I enjoyed the story, what makes Marvel’s Iron Man VR so good is the intensity and ingenuity of the combat and the movement. I cannot stress enough how incredibly empowering this game is for anyone who has ever dreamed of being a superhero.

These additional trials add a quick session component that will mean that even after completing the game, there is plenty of reason to keep coming back. Two particular challenges of each of these modes provide (for me at least) a borderline perfect reason for continuing to play past the campaign.

There is also a range of upgrade options for the suit, including nine different auxiliary weapons to unlock. Once you think you’ve mastered the combat, a quick switch in loadout will make the action feel so different that you’ll have to somewhat relearn your combat style. The versatility and creativity allowed in how you approach the action are a tribute to the depth and nuance that developer Camouflaj have baked into Iron Man.

With both local and global leaderboards to compete on and an upgrade system that keeps the action fresh, there is no reason that finishing the story should mean that any player would be done with their time as the Golden Avenger.

Graphically, Marvel’s Iron Man VR is impressive. While maybe not as acutely stunning as the likes of Red Matter 2, for a world that operates at this speed and scale, Iron Man VR is an outstanding display of what the Quest 2 can handle. Through some excellent directorial decisions, the action encompasses some truly epic scenes that lend awe and gravitas to the experience of controlling one of the most iconic Avengers.

The environments that the characters inhabit are rendered beautifully, with creatively crafted levels that make the game world seem much bigger than it actually is. The art direction and level design work hand in hand to capitalize on the player’s power set by creating beautiful vistas, cavernous interiors, and sprawling cities that look absolutely stunning as you swoop through them at extreme speed.

Similarly, the sound design is another component that speaks to the high-end production values that Iron Man VR displays. Every sound compliments the gameplay, reinforcing and directing the action and ensuring that the player understands what’s happening around them even in the heat of battle. The voice acting is also very well delivered and helps propel the story compellingly.

Iron Man VR is an outstanding addition to the Quest library and an absolute must-buy for any gamer that has ever wanted to be a superhero. With an innovative and exhilarating movement system that is paired perfectly with a unique and versatile combat system, Iron Man sets the standard for high-octane action.

Offering a decent-length campaign built around a good story and supported by a range of thoroughly engaging side missions, Marvel’s Iron Man VR truly has something for everyone. Camouflaj have delivered a class act with their first Quest title and set the bar high for anything else set to release from Meta’s in-house studios.

Marvel's Iron Man VR
TLDR : Summary
Marvel's Iron Man VR is a masterclass in combining engaging narrative with innovative movement and exhilarating combat. With a 5+ hour campaign, highly re-playable side missions, and some of the best action in mobile VR, there is no reason not to suit up.
Concept
8.5
Gameplay
9.5
Graphics
9
Audio
9
Longevity
8
User Rating0 Votes
0
Pros
Cons
9
Exhilarating
Get it on the Meta Store
Marvel's Iron Man VR