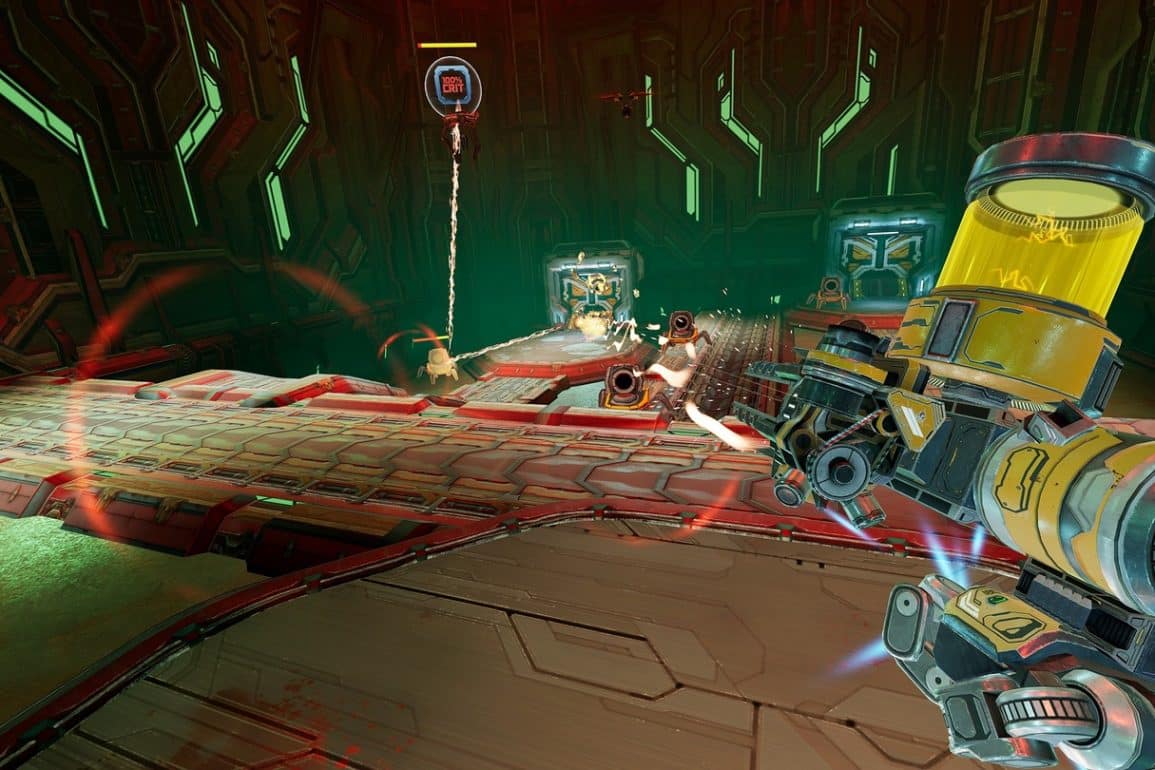 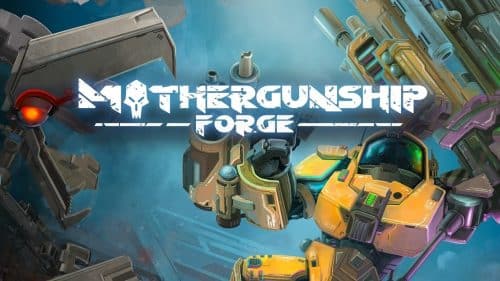 The marketing team for Mothergunship: Forge has done a pretty reasonable job.

In recent years, the announcement of another wave shooter would have been met with, at best scornful derision and, at worst, an angry mob, virtual pitchforks at the ready. Yet here we are, staring down the absurdly hand-crafted barrel of VR’s most saturated genre, and we are not outraged. We are, dare I say…intrigued? Bravo.

But the real question is, how long will that sense of intrigue last?

Mothergunship: Forge is, you guessed it, a wave shooter. But it’s not JUST a wave shooter. At the heart of the game is a unique and intuitive crafting mechanic that aims to set the game apart from the hordes of similar titles. To be honest… it comes close.

Each “level” of the game is essentially a room full of robotic harshness, which you must dispatch from the confines of a rather small platform. The action takes place entirely in the 180 degrees in front of you, and although there is some action being thrown at you from the sides, the lack of a total 360 onslaught is a real missed opportunity.

You begin with gauntlets upon which you can fix randomly selected weapons. However, at the end of each room, you have the chance to be awarded another gun part. Essential to this process is the Lego-like connector pieces which will allow you to mount more components together and create ever more preposterous weapon configurations.

The actual weapon attachments range from the run-of-the-mill shotgun and grenade launcher to the slightly more inventing Pizza slicer, a metal box that launches saw blades into the fray. In between rounds, you can reconfigure your arm-senal to try new combinations or try and fit in even more destructive potential. All in all, this system is really great and is easily the best reason to play Mothergunship: Forge.

Mothergunship: Forge is a game that is basically just built on one really solid premise; the gun-crafting mechanics. This element is addictive, engaging and quite simply, a lot of fun. Had MGS: Forge taken that wonderful core conceit and built a game around it that complimented it as much as it celebrated it, then this game could have been something exceptional. That is, however, not what happened.

Instead, developers Terrible Posture Games have shoved their innovative crafting system into the bloated corpse of the most overplayed genre available in VR and, in doing so, sentenced it to death. Don’t get me wrong, everything here works and works pretty well. In fact, MGS: Forge is a solid iteration of “stand here and shoot the baddies”. But so are the scores of others that already exist. It’s not bad per se; it’s just been done before, quite often.

The game offers some bullet hell components, which fill the screen with assorted chaos and brings a Pistol Whip style physicality into the gameplay, which works well. The rogue-like feature that allows you to pick the prize you win at the end of a wave is well-executed and enables the player to tailor their run to a mood or play style. Even the progression system is well done, with new rewards clearly signposted and enough new gear unlocked at the end of each run to make you want to go back in again.

There is some very basic movement on offer. Still, the size of your platform is limited to the point that the smooth locomotion feels like an afterthought. Those of you who have larger play spaces will definitely get the most out of the game as the room-scale duck and dive elements add a lot more presence to the action.

Honestly, there’s nothing here that’s bad. Still, without the super cool crafting element, Mothergunship: Forge would probably have been the gaming equivalent of a small beige wall located within the museum of beige walls.

As it stands, I really enjoyed my first 3 hours in the game, then tolerated another two hours before playing a final hour out of a sense of review-based obligation. Once this review is done, I can pretty much guarantee that I will never feel the urge to play it again.

Mothergunship: Forge also has a coop mode and, in this instance, has achieved something that I have quite literally never seen before. That is, they have made the first multiplayer mode that is actually less fun to play with a friend than the single-player game.

On the plus side, the game allows you to throw gun parts to each other so you can swap pieces in and out. That was a fun element which I enjoyed. Unfortunately, that was about it (and the sparkling conversation, of course, Omar).

The MP version of the game removes all the progression, the rogue-like elements, and the bosses. It literally removes all the things that keep you invested and replaces them with another player. I can imagine that if I wasn’t playing with a friend with whom I enjoy talking bollocks, I would have noped out at about wave 3 and spent some time evaluating my life choices.

Visually, Mothergunship: Forge will not be winning any awards, but it gets the job done with reasonable proficiency. The art direction is solid, creating a chunky industrial world that is satisfying to blast robots in. The weapon effects are all nice and punchy; even in the most chaotic moments, everything feels clean and easy to interpret. Each level has a unique visual feel, making your progression through the waves feel satisfying. The enemy design does feel like it could have been a bit more creative as fairly shortly, enemies start to repeat themselves, just in bigger versions. It works, but it’s hardly innovative.

The audio landscape that MGS: F provides is again perfectly satisfactory. The voice acting is good, although sparse, but adds a nice sense of character and polish to the game. The music is a cavalcade of non-descript video game music that suits the tone and theme of the game perfectly. You’re probably not going to be putting it on your next playlist. To give a better example of how noteworthy the music is, after 6 hours in the game, I’m having trouble remembering a single riff. But I know that it made me feel extra shooty at the time.

The spatial audio is perhaps a little muted, and the enemy sound design is also a touch unimaginative, but as with the rest of the game, there’s nothing overtly disappointing on display.

Mothergunship: Forge is a wonderful core mechanic that was sadly robbed of the chance to appear in a game worthy of its promise. It is an entirely satisfactory iteration of the wave shooter genre, but when you see how much fun it is to build the ever-growing monstrosities of doom, it seems criminal that you only get to use them in such a basic gaming context.

I’m reluctant to strongly warn people away from playing MGS: F as it’s really not terrible. By the same token, it’s just as hard to recommend it as there is just so much content out there that delivers wave-focused action more proficiently. Now, if you could just give me a gun crafting system like this in the intense wave survival of Crashland, you may just never get me out of the headset again…