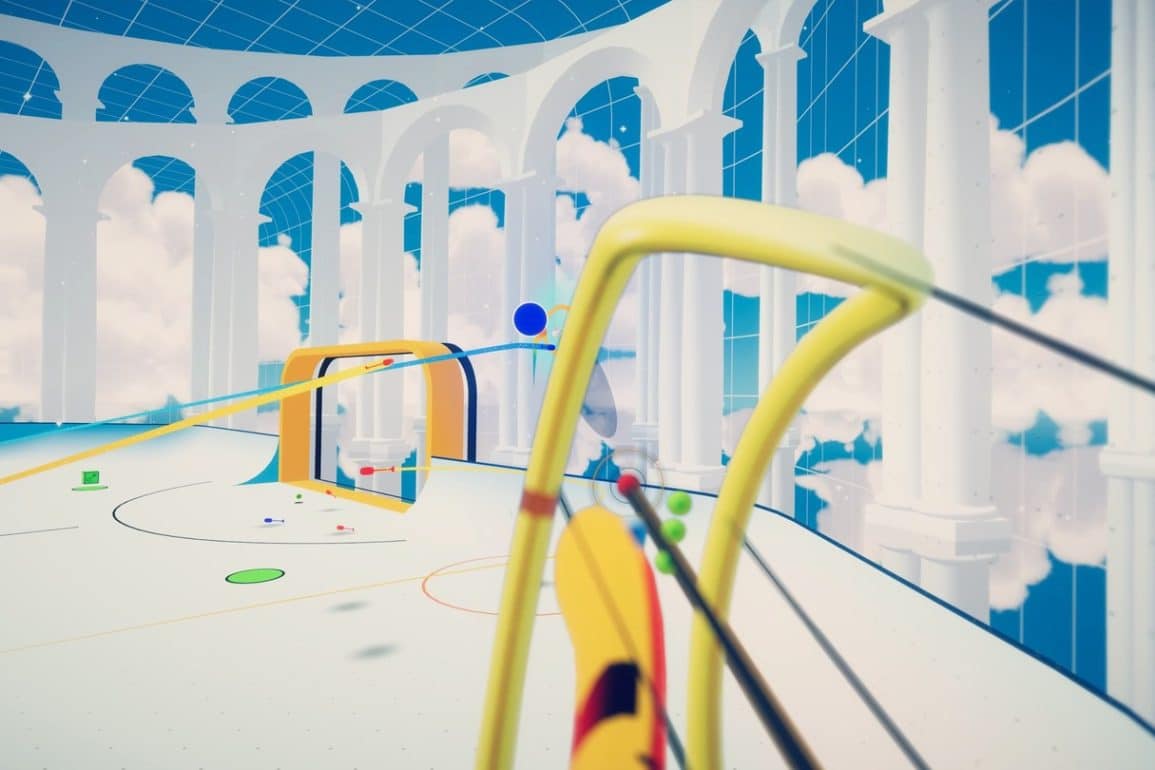 I need to begin this review of Nock with a point of order. On the Oculus page, developers Normal have boldly touted the game as “… the first real multiplayer sport for VR”. This, my dear viewer, is a total load of bullshit.

Even if we ignore the numerous failed attempts at creating a VR sport that predate the Quest, the simple fact remains that Echo VR is a sport entirely built for VR that has been out since 2017. It’s even been available on Quest since 2020!!!

I have no idea what the marketing department was thinking when they concocted that lie, but it holds about as much truth as me introducing myself as the first bearded man to have toes. Shame on you, Normal. Shame.

Now that I’ve got that out of my system, I can take a deep breath and tell you how absolutely fantastic Nock is to play.

On its face, Nock’s premise is simple – in the same way that most ball sports tend to be.

Nock is a competitive team sport that sees opposing teams trying to knock a giant beach ball into the opposing goal by skating around the arena shooting arrows at it. Simple. Although the obvious comparison of Rocket League exists, I’ll try not to dwell too long in the comparisons for those who (like me) are broadly unfamiliar with it. If you are familiar with Rocket League, this is basically that, in VR and with arrows.

Players can hold a limited amount of ammunition and must choose their shots wisely and constantly be scouring the playing field for pickups. Once fired, arrows can also be changed in mid-flight with a simple button press, transforming them into stationary blocks to stop the opposition’s shot or redirect the ball. Make the ball go fast enough, and it becomes weaponised, stunning any player it hits and resetting them to their starting position.

Within this simple premise lies so much room for nuance and skill to develop that the only thing as good as playing Nock is sitting back and watching god-tier players refine their skills and turn this excellent game into an outstanding sport.

The gameplay in Nock is so addictive that I honestly hate you all for making me write this review instead of playing the game.

Everything about the gameplay is so easily accessible that you will immediately be ready to jump into a game and have fun right from the start after completing the very brief tutorial. The movement system is one of the best I’ve encountered. The player can glide around the arena using the left controller to grip and launch at speed. This system compels you to manoeuvre with graceful precision across the court. The same motion with the right hand will handle the vertical movement allowing players to launch themselves into the air, taking the gameplay into contest across a full range of 3D movement.

Amidst the effortless gliding and jumping around the arena will be a chaotic hail of arrows, as players jostle for position and use their projectiles to push the ball this way and that. Initially, the skillset focuses on basic accuracy and timing as one gradually masters the art of hitting a moving object. But, within a very short learning curve, players will find themselves intuitively making complex physical calculations on the fly. Like in a game of pool, the real skill comes from understanding where to hit the ball to influence its movement in a particular direction. If you imagine a game of pool where the ball is never allowed to come to rest, you can begin to see the skillset that the game so effortlessly demands from its players.

Once the basics are mastered, the advanced skill of using blocks to stop or redirect the ball’s momentum will require a whole new dimension of quick thinking. Rather than just using arrows to push the ball around, artful players can turn the game’s flow with well-placed block shots, instantly creating new scoring opportunities.

Despite my best efforts, it is hard to describe how much fun Nock is to play other than to say that it’s really cool.

Where Nock lands itself into a little hot water is deciding to launch an entirely multiplayer game. Although there are bots that you can play against, they offer little to no actual competition and become quite obsolete within an hour or two of playing.

At this point, you are left with the great “tree falling in the woods” question of multiplayer gaming. If your game is 100% multiplayer and no one is playing, is it still a game?

Thankfully, the developers have priced the game sensibly, making it accessible for most players. They have also invested pre-release in sharing the game with almost every reputable content creator.

Thanks to the high quality of the gameplay, there is overwhelming positivity around the game from the content creator community, which is a big advantage. As a result, you can pick any time of day, and you will always find a game.

What is also notable at this early stage in the Nock community’s development is that, on the whole, every “Nocker” that I’ve encountered has been genuinely friendly. I have yet to experience any toxicity, and due to both the outstanding gameplay and excellent player base, I’ve had some of the most fun I’ve ever had in VR. Long may it last!

NOCK ONE OUT BY YOURSELF

The other big criticism for Nock stems from how difficult it is to find your friends. Given that the player base will naturally fall away, the ability to quickly and easily find the people you want to play with is vital. This is the weakest part of the Nock experience, and the developers need to very quickly look at how friends can connect in-game.

Whether it be a social hub like Blaston, easy invites for people from your friends’ list like Echo, or a system of befriending players like in Population: One, Nock’s social networking needs an urgent update. There is currently a vast array of well-tested options out there, and if Normal can’t bring this element in line with other games, then Nock is at a high risk of being left behind.

YOU SET EM UP, I’LL NOCK EM DOWN

Graphically, Nock isn’t amazing, but it really doesn’t have to be. The single arena that the game occupies is entirely underwhelming, but I can honestly say that not once in the middle of a game have I ever actually noticed that. What is apparent throughout the game is just how much effort has gone into the physics system that underpins everything in Nock. Watching the way this plays out within the game is far more satisfying than any fancy graphical flourishes may have been.

Similarly, the audio seems benchmarked at the “get the job done” level, but again who cares? The music is good enough to encourage players without becoming intrusive, and the audio cues that alert you to what’s happening around you are all completely adequate. They are, however, just not particularly noteworthy or exceptional.

I think it’s a real testament to the quality of the gameplay that in trying to score the graphics and sound, no specific visual textures or sonic flourishes came to mind. Instead, I find myself thinking of moments where these elements fused with the gameplay to create an overall experience that became far more than the sum of its parts.

Nock is an outstanding addition to the Quest library and the existing pantheon of unique VR sports. As the absolute epitome of “easy to learn but hard to master” gaming, there is an enormous amount of depth and nuance available to those looking to test themselves. It also offers an accessible, quick and easy bit of fun for those who would rather not invest the time and prefer to play more casually.

With a few tweaks to the social aspects of the game and enough engagement from the developers to foster a lively community, Nock has the potential to become a genuinely special part of the Quest ecosystem. For anyone on the fence, the modest price tag and ease of entry really indicate that you just can’t Nock it until you try it.

Nock
TLDR : Summary
Stop wasting my time and go buy Nock so you can face me in the arena.
Concept
8
Gameplay
9.5
Graphics
7.5
Audio
7
Longevity
8.5
Pros
Super easy to learn
Fantastic multiplayer action
Great skill opportunities
Cons
No friends list
Weak bots
Only one arena
8.5
Addictive
Get it on the Oculus Store
Nock