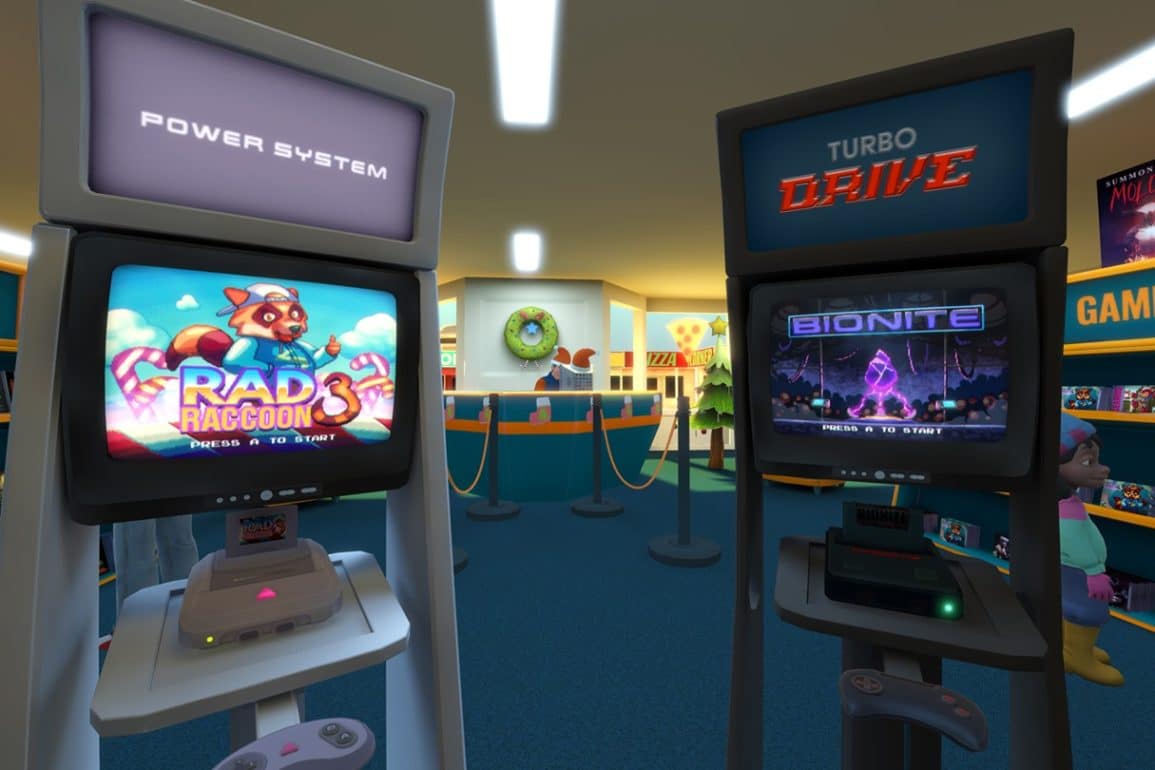 A Blast From Your Past To Charm Your Quest 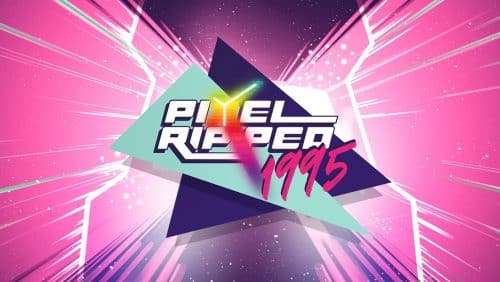 Pixel Ripped 1995 is a challenging game to review for more than one reason. First of all, it’s a sequel of sorts to a game I’ve never played, Pixel Ripped 1989. Second, it’s a game rife with nostalgia and which, to some extent, relies on that nostalgia to drive its charm. Both Pixel Ripped games are throwbacks to earlier times. Back then, we played games on consoles like the Sega Genesis (otherwise knows as the Mega Drive) and the Super Nintendo Entertainment System. All this nostalgia is double-edged since the game really should be reviewed twice. One review should be by somebody who’s old enough to have lived through the gaming history that the game references so joyfully. The other should be by somebody whose first console might’ve been a Playstation 3 or an Xbox 360 and to whom the game must prove itself on its own merits. I’m in the former category, but I’ll try to speak for both experiences.

There are two worlds in Pixel Ripped 1995. One is the ‘real’ world of 1995, represented in cute 3D animated fashion, like an early Pixar production, and the other is the world of the game inside the game, Pixel Ripped. In Pixel Ripped (the video game inside the game), you are Dot, a video game character reminiscent of Samus Aran from the Metroid series. Your game world, since Pixel Ripped 1995 is set in…well…1995, is a colorful, pixelated place with colorful characters. This world quickly comes under attack by the big bad Cyblin Lord, who steals the Pixel Stone and flies away on his pet dragon’s back. Your aim, when playing as Dot, is to protect the game world from the Cylin Lord, defeat him, and retrieve the Pixel Stone, thereby restoring order to the game world! You are guided on this quest by the Master, your dark-robed guide who tells you what you should be doing and when.

Greetings, Starfighter. You Have Been Recruited!

Remember The Last Starfighter? In that movie, a video game player called Alex finds himself recruited into a cadre of alien starfighters after beating his favorite video game, The Last Starfighter. In Pixel Ripped 1995, the same sort of thing happens. Dot needs to sync herself with the best video game player around, and the Master leads her to a young boy named David Keene. Little David might be Pixel Ripped 1995‘s most significant asset because he’s a great stand-in for every child who’s ever played video games. As the game progresses, you become familiar not just with David, but with his mom and dad. So there you are, sitting in a little boy’s living room, playing his brand new video game on his tv, while his mom, who’s on the phone trying to sell houses, keeps telling him to stop playing the game. She’s heard it’s not good for him to be playing games all the time and keeps wanting to switch off his game console.

David isn’t entirely defenseless, though! He’s got a nerf gun, and he can use it to shoot things around the room, distracting his mom and letting him play some more Pixel Ripped! So here you are, playing as David, who’s playing as Dot. In David’s Pixel Ripped, you’re controlling Dot and helping her win her game. In Pixel Ripped 1995, you’re controlling David and helping him keep his mother off his back long enough for him to play as Dot. Got it? Good. I won’t be explaining this again.

This mechanic, of mixing the two worlds, is used several times throughout Pixel Ripped 1995, and to excellent effect. At some point, David is up at night in his bedroom, trying to help Dot finish one more level. His mother thinks he’s gone to sleep, and she, too, has gone to bed. You can hear her snoring, but if you accidentally shoot one of the bells in Dot’s game, it makes too loud a noise. This causes David’s mom to wake up. Groggy and stumbling, she turns on the corridor light and heads towards David’s room to turn off his game console. All you can do at this point is quickly grab the remote control, turn off the TV you’re playing on, and hope you did it fast enough for her to go back to bed.

My 16-Bits Have Pixar All Over Them

Although David’s world is depicted in Pixar-like cartoony 3D graphics, the games David (and you in turn) play are designed to look, feel, and sound like a product of their evolving times. First, they’re 2D and very pixelated. Later on in the game, they improve graphically and finally make the leap to basic 3D graphics as the narrative progresses, and as David’s father buys him newer and better consoles. The gameplay is, appropriately, a little wonky, but feels entirely appropriate, and you won’t ever blame the controls for losing a life. There is one purposeful exception to that, and it’d be too much of a spoiler to reveal it. Suffice it to say that it involves David’s mom playing one of the levels, and it’s hilarious.

The sound is equally a throwback, with all of it happening in glorious 16-bit beeps and tones. The core theme is very nicely done, and you hear various iterations and variations on it as the game goes on.

How Many Cartridges Are In My Console?

The Pixel Ripped games are helmed by Creative Director Ana Ribeiro. Ana started the first game on her own but has since been collaborating with ARVORE Immersive Experiences based in Sao Paulo, Brazil. If you watch Ana in any of the development videos for Pixel Ripped 1995, you’ll undoubtedly observe her unbridled love for video games, and for the games that she grew up playing. That energy is undeniably evident in the game, and it’s pretty infectious.

There are six levels to Pixel Ripped 1995, and each of them will remind you of classic games you’ve played before. There are forests to wander through, platforms to jump, a friendship with a handsome but fairly useless warrior called Cedric to endure, and, of course, several boss battles. Pixel Ripped 1995 has a little bit of early Zelda in it, as well as a little bit of early Mario, Streets of Rage, Double Dragon, and Castlevania. They’re all thrown into the mix, as are some others that I’m sure I’ve forgotten and that other players will fondly remember. The boss battles put all your skills to the test, forcing you to multitask as you control Dot in her game world, while also handling David in the ‘real’ world. The bad guys don’t stick to one dimension, either. Battles often start in one world and then abruptly break into the other. It’s a wild ride, made more engaging by some narrative twists happening in the real world.

Thank You So Nice!

Pixel Ripped 1995 is two games and can be scored very differently depending on which one you find yourself playing.

If you’re an older gamer who has grown up with the games that Pixel Ripped references, it’ll give you all kinds of feels, and you’ll love it. It’ll remind you of growing up with the slow, sometimes underwhelming evolution of game consoles. You’ll remember arguing with your mom to squeeze one more go at a game before being sent to bed. You’ll recognize some of the characters represented in Pixel Ripped’s ‘real world,’ and you’ll find them eerily familiar.

If you’re somebody who doesn’t’ understand why anybody would choose to play 16-bit games inside a virtual world, you might find Pixel Ripped 1995 underwhelming. If you don’t have the memories it takes to fuel its nostalgia, you might not be impressed at all. Here is the worst possible way to view Pixel Ripped; it’s a bunch of 16-bit mini-games wrapped up in a relatively cliched virtual reality interactive cartoon. From that point of view, it’s a game made unique only by the arguably gimmicky mechanic of having both those worlds collide, mostly during boss battles. It is certainly possible to see Pixel Ripped that way. Still, to see it that way would be unfair to its intentions and to the experience it offers long-term gamers.

Pixel Ripped 1995, more than any other game I’ve played on the Quest, is definitely more than the sum of its parts.

Can I Have One More Go?

For all its merits, Pixel Ripped 1995 doesn’t offer much replayability or multiplayer gameplay. This isn’t a game you’ll be showing your friends unless they have the time it takes to appreciate what it’s trying to accomplish. It’s not a game like Beat Saber or Pistol Whip that you can quickly pick up and play for 10 minutes. It offers a single-player campaign that’ll take you around 4-6 hours to complete, and if you’re the player it has in mind, you’ll enjoy every second of it.

With a charming mix of 16-bit graphics and gameplay and an animated narrative that’s touching, albeit sometimes cliched, Pixel Ripped 1995 is a worthy trip down memory lane. It’s a joyful reminder of the games we loved as children and how our parents always got in our way while we played them.

Pixel Ripped 1995
TLDR : Summary
With a charming mix of 16-bit graphics and gameplay and an animated narrative that's touching, albeit sometimes cliched, Pixel Ripped 1995 is a worthy trip down memory lane.
Concept
9
Gameplay
7
Graphics
7.5
Audio
8
Longevity
5
User Rating3 Votes
6.3
Pros
Brings back wonderful memories
Has a joy that's infectious
Cool mix of gameplay styles
Cons
No reason to play it again
Relies on nostalgia for most of its charm
7.5
Ice Cream
Get it on the Oculus Store
Pixel Ripped 1995