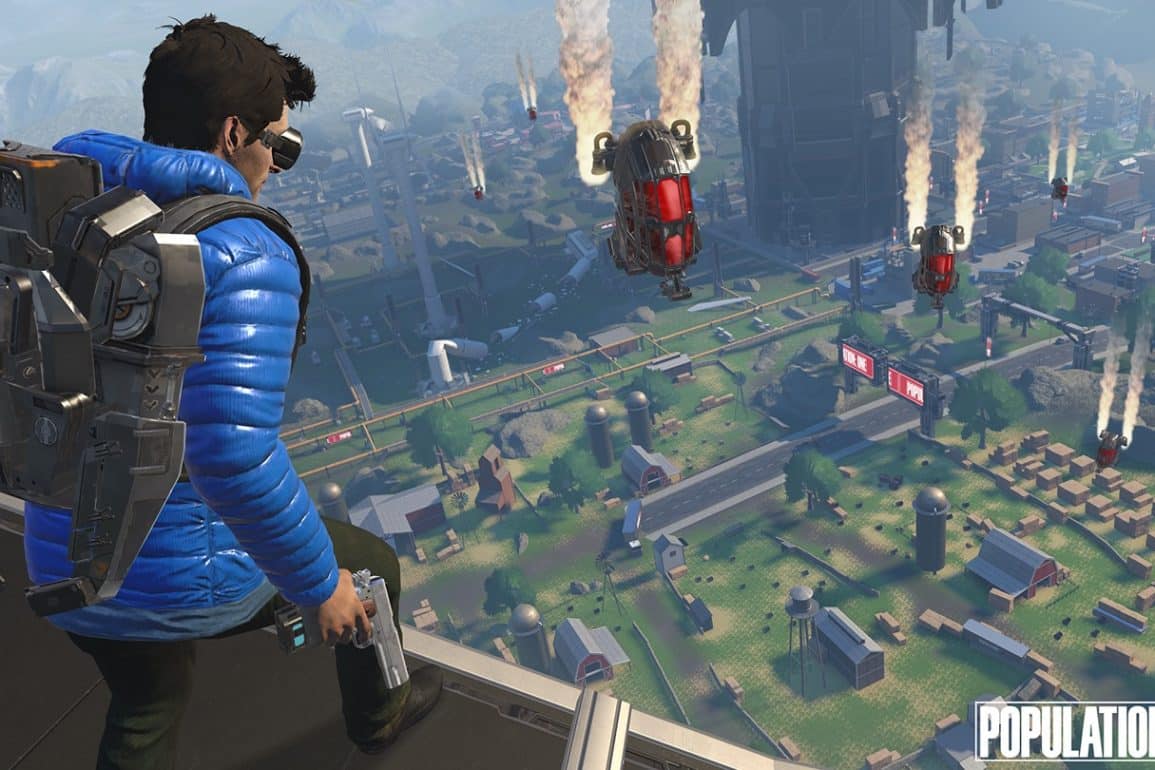 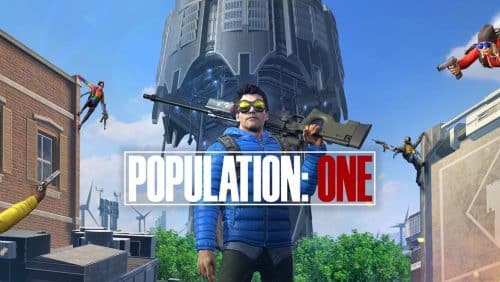 With the release of the much-anticipated Population: One, the Battle Royale format, still ridiculously popular with games like PUBG and Fortnite, makes its way to VR and, this time, it’s completely untethered.

My Xbox has mostly been used for single-player campaigns because I always found the disparities of cross-platform multiplayer gaming, with aimbots, game trainers, and Cronus Zen users, rather appalling. Playing against marksmen levelled up beyond all human possibility, clans making their way through maps like a band of street thugs on cocaine, or kids in lobbies screaming and cussing at everything and anyone they come by, wasn’t my thing.

When untethered VR came along, I was intrigued. In fact, I was intrigued enough to try anything I could get my hands on – and suddenly I was a fan of multiplayer gaming. There was a certain attraction to going into battle armed only with your actual hands and mind, without going against aimbots or heavily modified gaming gear.

The Oculus Quest levelled the playing field for me, and suddenly I found it exciting to challenge other players and not just their gaming rigs. What better genre to do this than the mighty Battle Royale?

But BigBox had other plans in mind when the alpha and beta testing of Population: One first began. Guarded by an iron-clad NDA, it almost seemed like they didn’t want the gaming world to lay eyes on their new take on the Battle Royale format. I have to be honest here: I was mad at BigBox for the first few weeks. I was robbed of the ability to write about Population: One throughout the testing phase and that was hard for me. But after seeing all the buzz in their Discord and watching as the community helped shape the game, I grew grateful.

How To Battle Royale

Population: One is one of the first games on the Oculus Quest platform to combine great graphics while making use of an original gesture-based control scheme. It really does feel like it’s fully utilizing the Quest.

You start each session in a lobby area, where you get an overview of some avatar options. Avatars are still somewhat limited, but you can choose from more preset characters once you’ve collected some points.

You can also build a squad directly from your friend-list. Population: One uses the Oculus Party feature to conveniently match you and your buddies up when the next round is up. You can go into battle solo if you want to be a lone wolf, but it’s going to be tough out there!

After a squad is built and a squad leader is assigned, you can jump into combat right away. You will be thrown into a secondary lobby which is designed like a pre-game experience. A ready-room, if you will. All players and squads stay there until the roster is filled and the royale round is ready to start. There are some guns scattered throughout the pre-game minimap, so you can practice aiming or climbing while waiting to battle it out.

When the round starts, you are introduced to some contraption you may recognize from a ski resort: Skylift Pods! These will fly you out to the playing field – a beautiful little countryside compound sporting a church, a graveyard, some farms and windmills, and even some industrial, and residential areas. BigBox somehow managed to cram a darn big map onto the Oculus Quest! Guns and gear are strewn around randomly. Wisely choosing your jumpoff point can save your life and improve your chances of being the last man standing.

The Battle Royale concept is well-known; Players are tossed into a map, the overall size of which is gradually reduced. This tightens the playing area and forces increasing conflict. Slow players will fall off the map, and players unskilled in scavenging or killing will soon be overrun or shot.

You will have to think quickly to be among the final group of survivors or to have any hope of being the last man standing at the end of a match. If you entered the battle as a squad, you can win as a squad.

The Virtual Reign Is Upon Us

Not only does Population: One use a smart delivery system to bring you to your jump spot, but the real fun begins after dropping out of your pod. You can glide! Every player is clad in a wingsuit activated by spreading your actual arms to sail around the map. The earlier you start spreading those arms, the farther you can travel.

Apart from every structure in-game being accessible by simply smashing in doors and windows, you can climb up anything that has a wall. You can use the glide ability to access higher ground when dropping out of the pod. My favourite places are the windmills because they are perfect vantage points and almost always contain a stash of guns. If you’re quick and accurate enough, you can pick off other players while they are still gliding toward their chosen landing spots. BigBox calls this the “Vertical Combat System” meaning that you are not only fighting against enemies on one level – but on all available levels of the map.

Once standing on solid ground, you can build metal shields around, above, or below you, to protect yourself against the hailstorm of bullets you’ll inevitably face. Personally, I get bored of fortifying a position, so I move around a lot, often going into a one-handed glide and shooting at other players whenever I get the chance.

BigBox’s tagline is “Climb. Fly. Build.”, I would’ve made it “Climb. Fly. Collect.” Why? Well, you will find a lot of guns and gear as you play. Anything from handguns, submachine guns, carbines, assault and sniper rifles, even grenades will cross your path at least once per round. The reloading mechanisms are original to each weapon or gun class, so there is a bit of a learning curve before you can be considered a Population: One gunslinger. You’ll also find armour and building materials and supplies like energy drinks and bananas to replenish your lifeforce and dedicated battery-like energy chunks that juice up your stamina.

When you’ve joined a squad (which you can do in the lobby or in-game by fist-bumping other players), you’ll be able to revive teammates with a defibrillator. Charging the defibrillator gets tricky when you are under fire because it requires steady mechanical motions.

Here’s a valuable pro-tip; If you play in a squad, assign clear roles. Look at the successful squads formed during the beta – they always move in-sync and with tasks assigned to every member. Some veteran squads act like they’ve been playing together for decades. Mad props go out to teams like “SmallBox” and “Machete Squad”! You guys rock!

To sum up: The aiming system is sound, and you can wield almost every gun single-handedly. This adds a lot of fun and versatility to gliding around while shooting people above or underneath you but could displease players expecting more realistic gunplay. I, for one, didn’t expect a simulation, so I am completely cool with that. Movement is good and fluent, graphics are good, and the map is well-designed. I strongly hope we’ll get more maps in future updates. Bring it on, BigBox!

The Problem With Kings

There are also a few problems with Population: One that the developers will have to weed out sooner or later. The graphics, while being a big pro for the game, can also pose a big no-no in some regards. The limited avatar choices are a little off stylistically. I know that the big red machine called Fortnite has its teeth in everything Battle Royale and sets standards in almost every aspect of the genre, but…this is an armed fight to the death! Not a mountain retreat work weekend for hipsters! Please BigBox, stop it with all the weird ski goggles (even if they might look kind of fitting in the initial skylift ride), down jackets, and colourful hair-dos.

Also, the weapon skins, even if designed to indicate rarity and collectibility, could be simpler or, at least, more realistic. The colours seem off and sometimes have a somewhat weird paintball or Nerf Gun look and feel to them. I’m man enough to shoot other dudes in the face with a pink machine gun, but sometimes I wish these would just look a little more like I imagine them in real life.

Real And Royale Pains In The Butt

What I really can’t get used to are the clumsy backpack system and the quickdraw mechanics while running or flying. I found myself struggling with drawing quickly or getting stuff from my rucksack way too often. Sure, controls are somewhat limited due to Touch Controller ergonomics, but maybe there is a way to solve this more elegantly like a stowaway gesture to the back as other games have done.

There are also some minor issues with haptics that need to be addressed, so we’re hoping BigBox will also find a way to make this gesture more natural.

I have to admit, I am fairly impressed by Population: One. This first entry of Battle Royale into Virtual Reality is bound to secure a solid player base and do so relatively quickly.

Population: One is available on several platforms and allows for a massive crossplay experience. You will be pitted in battle against players not only on Quest and Rift systems, but also on other headsets like the HTC Vive, Valve Index, and others.

Priced at $29.99, Population: One is totally worth the money for fans of the genre. I already had hours of fun during beta testing can vouch for its replayability. The Battle Royale concept has transitioned surprisingly well to the untethered world of the Oculus Quest, and Population: One nails most of its controls.

Right now I give Population: One a definite thumbs-up, and I wholeheartedly recommend to those of you that have longed for a worthy Battle Royale experience in Virtual Reality. For my taste, BigBox may be better off dialling down the screaming colours and weird outfits a bit, but apart from that, the game feels great. Happy hunting, and may the best Royale player wear their crown for at least one more session!

Population: One
TLDR : Summary
With great graphics and gameplay, the Battle Royale concept has transitioned surprisingly well to the untethered world of the Oculus Quest, and Population: One nails most of its controls.
Concept
8.5
Gameplay
9
Graphics
8.5
Audio
7
Longevity
9.5
User Rating0 Votes
0
Pros
Graphics are awesome
Exciting vertical combat experience
Highly replayable
Solid squad system
Cons
Avatars are preset and very limited
Collectable guns are fashioned to the tune of teenage bubblegum Americana
The inventory controls feel off
9
BulletStorm
Get it on the Oculus Store
Population: One